Rapid City man slated for execution knows the end is near, deacon says
Share this
1 of 2 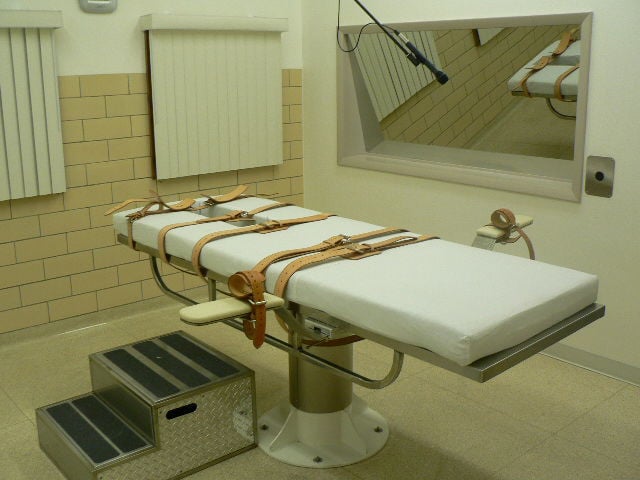 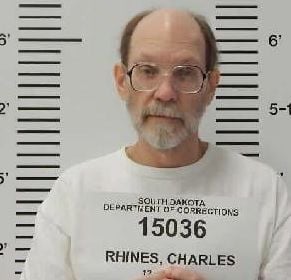 Convicted murderer Charles Rhines understands there's likely nothing he can do to save his life, according to a man who recently visited him at the state penitentiary in Sioux Falls.

"I asked him how he felt about it and he said he's powerless to do anything about it. He didn't state a feeling about it, but he's kind of to the end and he knows that, so I'm sure there must be some fear going on," said Denny Davis, a Catholic deacon and anti-death penalty activist who visited the death row inmate last weekend.

"There's not much that anybody could do. He's been on death row — in January it will be 27 years — so he's pretty much resolved he's running his last appeals," said Davis, who added that Rhines appeared calm when he last saw him.

Rhines, 63, is scheduled to die by lethal injection at the South Dakota State Penitentiary in Sioux Falls at 1:30 p.m. Central Time on Monday, more than 26 years after a Pennington County jury handed down the death penalty and more than 27 years after he murdered 22-year-old Donnivan Schaeffer.

During that time, Rhines, like all other death row inmates, has spent his days in Capital Punishment Housing, which involves solitary confinement and maximum-security conditions.

Death row inmates spend 23 hours a day in their one-person cell, said Michael Winder, spokesman for the Department of Corrections. They get 45 minutes a day to recreate and use phones and tablets and 15 minutes to shower. They're not allowed direct contact with other inmates and are shackled whenever they're moved, according to the DOC's Capital Punishment Housing policy.

The inmates can receive visits from legal counsel, clergy and family members, but they can't hug or touch each other. They can also borrow library books and receive commissary items.

The United States has about 80,000 people in solitary confinement, similar to the number of prisoners the United Kingdom has in its general prison population, according to a 2017 Frontline report.

The practice has been linked to depression, hallucinations, self-harm and suicide. In 2011, the United Nations Special Rapporteur on torture called for banning solitary confinements lasting more than 15 days.

Davis has been visiting Rhines for the past few years as a volunteer chaplain at the prison. He visited Rodney Berget before he was executed last fall for  murdering prison guard Ronald "R.J." Johnson during a failed escape attempt.

He said Rhines spends his time beading, watching TV and writing letters. Rhines told the Argus Leader through letters in 2014 that he also works out, reads, completes crossword puzzles and is able to communicate with other prisoners by yelling. During recreation time, Davis said, Rhines is able to walk in a 20-by-15-foot indoor room or in a new outdoor area.

During his visits, Davis sits outside Rhines door, which is solid except for a slit guards use to pass meals through and holes so guards can look into the cell.

He said Rhines is friendly and open to chatting. Davis said he shares information about any new legislation related to death row or the death penalty, while Rhines shares updates about his appeals and lawsuits. He said Rhines doesn't bring up the crime that put him on death row.

Rhines told the Argus Leader in 2014 that he eventually came to feel bad about the pain he caused Schaeffer's parents. But a year later, he referred to their grief as "yadda, yadda, yadda" in a letter he sent to incumbent mayor Sam Kooiker, according to a document the South Dakota Attorney General's Office sent to the U.S. Supreme Court. Kooiker was being challenged by current mayor Steve Allender, a former police detective who investigated Rhines.

Rhines also told the Argus Leader that he doesn't deserve to die, saying there are much worse murderers serving life sentences.

Schaeffer's parents told the Journal last week that they don't want to be interviewed until after the execution. But in June they said it's time for Rhines to be executed and they don't regret the jury's sentence.

Davis and his organization, South Dakotas for Alternatives to the Death Penalty, say they're against the death penalty due to its cost and risk of executing innocent people. They also point to racial disparities and religious concerns and say it's applied arbitrarily and doesn't prevent other murders.

"We are doing the same thing to him that he did to Donnivan Schaeffer. So to kill someone who has killed, what does that say about us?" Davis asked.

Once the execution nears, Rhines will be brought into the chamber, strapped down to a bed and have two IV lines inserted into his arms, one that will carry the lethal injection and one that will serve as a backup. The state plans to use pentobarbital, a barbiturate that slows the central nervous system.

It's the same drug the federal government plans to use in its executions beginning in December, and it's been used in by 14 states in more than 200 executions, according to a July Time article. Pentobarbital was used during Berget's execution and in 2012 for the other attacker, Eric Robert, and for Donald Moeller, who raped and murdered a young girl in Sioux Falls.

The person inserting the IVs and administering the drugs must be qualified to do so, but they can't be chosen from the DOC's health-care staff. It's illegal under South Dakota law to disclose their name or the name of the pharmacy supplying the drug.

Once Rhines' IVs are inserted, the executioner goes into a room next to the chamber where that person will administer the drugs and can watch Rhines through a one-way mirror that protects their identity. Witnesses are then let into viewing rooms.

The attorney general, trial judge, local state's attorney and sheriff, victim representatives, at least two members of the media and "a number of reputable citizens" must be invited to serve as witnesses. Rhines is also allowed to have five witnesses whether they be family members, lawyers, friends or clergy.

Attorney General Jason Ravnsborg, Pennington County Sheriff Kevin Thom and Pennington County State's Attorney Mark Vargo — who worked on the Rhines case — have confirmed they will attend. John Konenkamp, the judge who oversaw the trial and later became a justice on the state Supreme Court, could not be reached.

Allender and Dennis Groff, the lead prosecutor, were both invited but only Groff plans to attend.

Davis said Rhines told him he will have four witnesses and he knows they include his lawyers and a Lutheran minister. He said Rhines and his family decided it would be "too hard" for his family to come and watch. Davis will be outside the prison, holding a prayer vigil with his organization. He expects about 50 people to join him.

Friends of Schaeffer and supportive strangers may show up to support his family and the execution as they did during Berget's execution.

Once all of the witnesses are in the viewing rooms, Rhines will have the opportunity to make a final statement before the executioner administers the pentobarbital. The drug should render Rhines unconscious within 20 to 30 seconds, a doctor testified in court records.

A coroner or someone else will then determine if Rhines is dead, and if so, note his time of death. The witnesses will be taken away before Rhines' body is examined by the coroner and taken away by his family to be buried. If his family doesn't claim his body, he will be buried in a Minnehaha County cemetery.

The media witnesses will then share details of the execution with other media outlets who will report it to the public. Schaeffer's family and other witnesses are also allowed to address the media.

Charles Rhines learned Tuesday that he is scheduled to be executed in early November, 27 years after he stabbed a former co-worker to death wh…

Rhines scheduled to be executed Monday

After nearly 27 years on death row, Charles Rhines is scheduled to be executed by lethal injection at 1:30 p.m. Central Time on ​Monday at the…