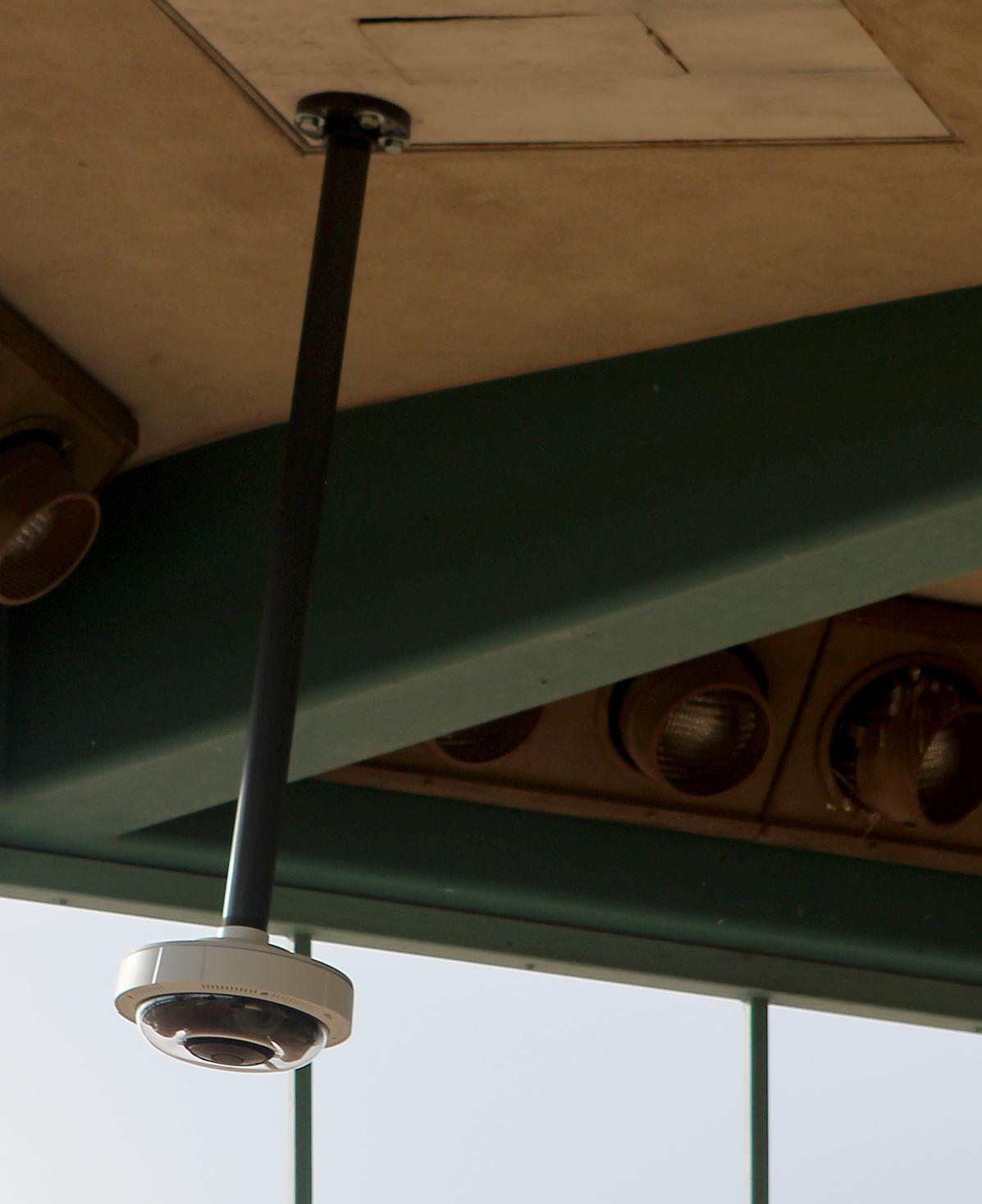 The Rapid City Police Department recently installed this camera in the band shell at Memorial Park to prevent and solve crimes. 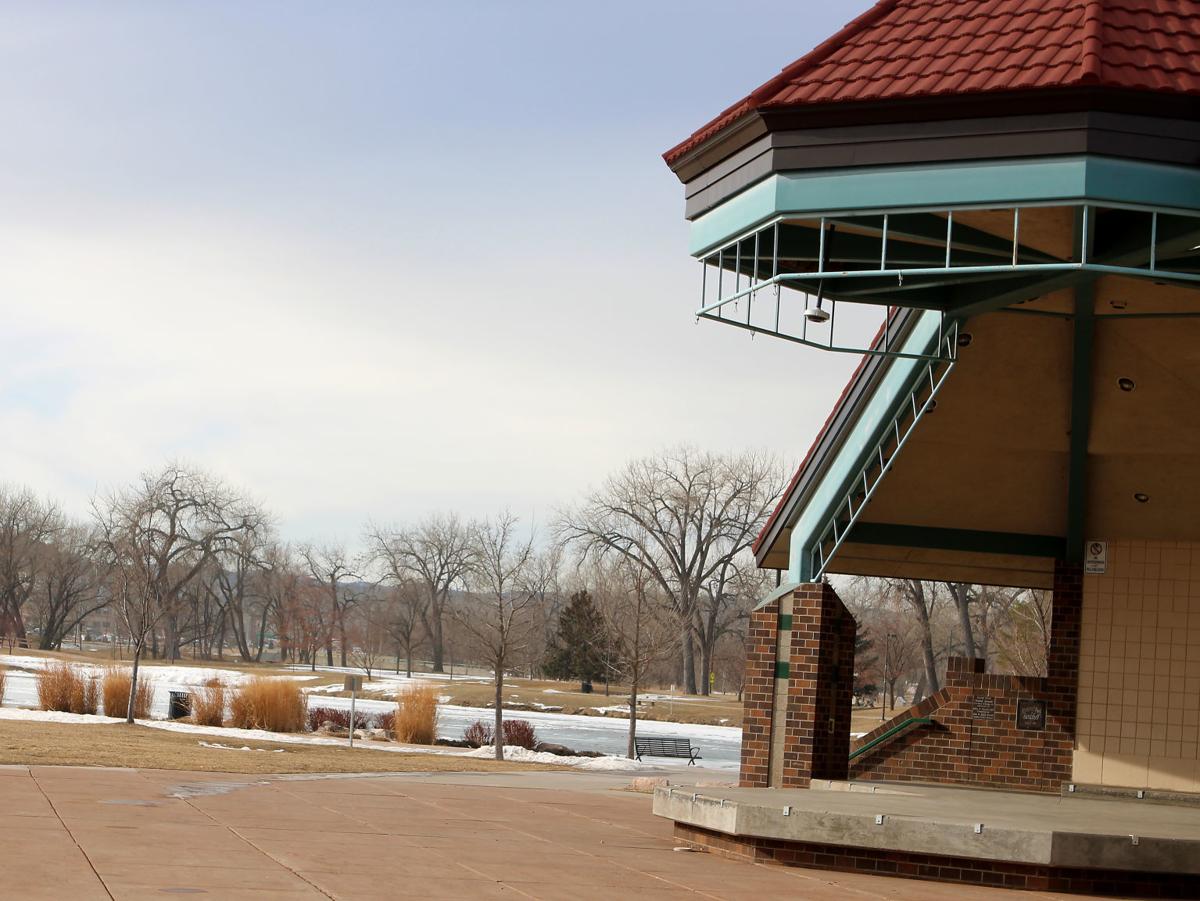 A security camera hangs from the ceiling of the band shell and next to the pond in Memorial Park in Rapid City. 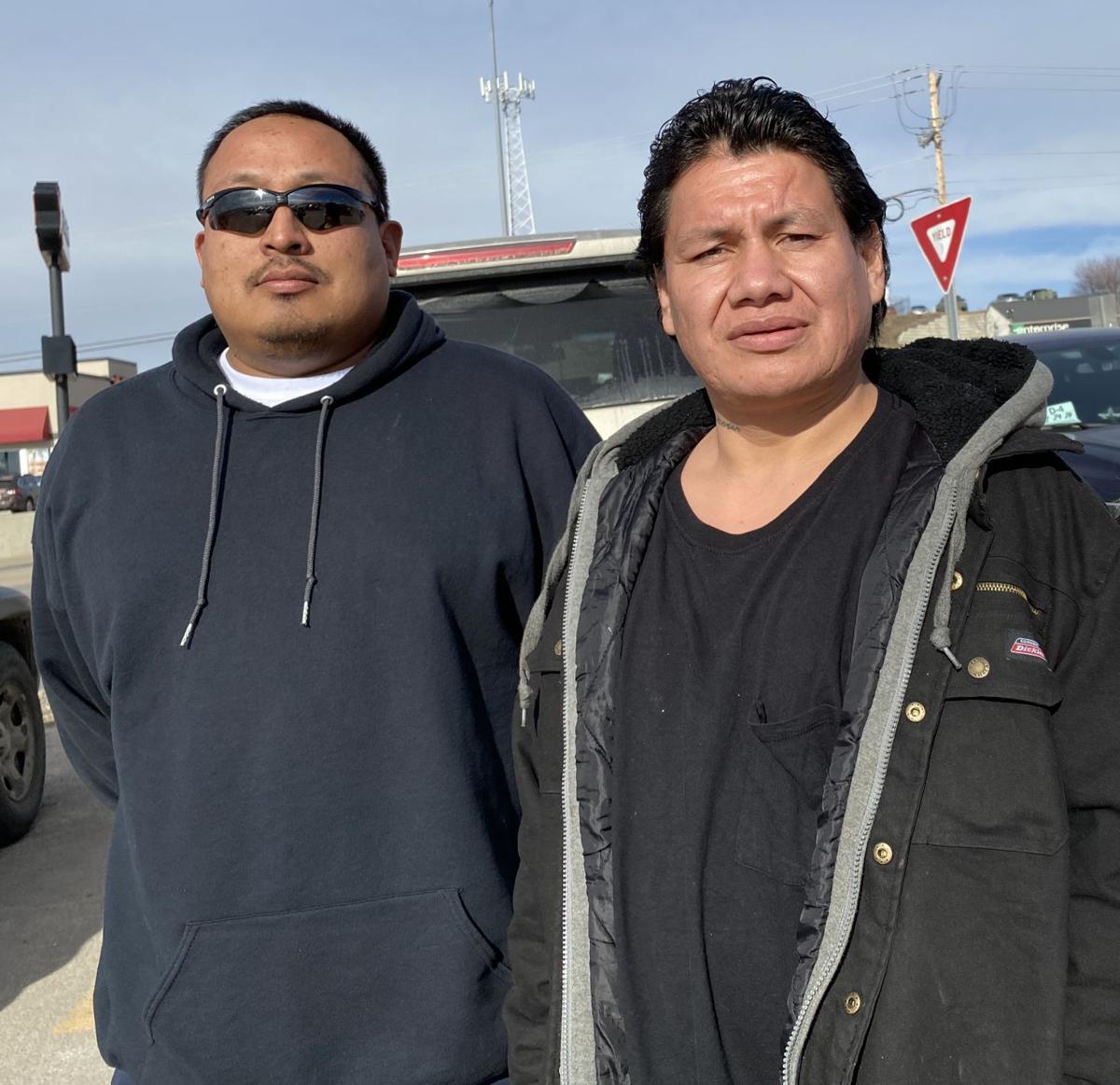 Lloyd Big Crow Sr., left, and Frank Janis said they're upset that RCPD installed a security camera in the band shell at Memorial Park where free food is served to the homeless community. 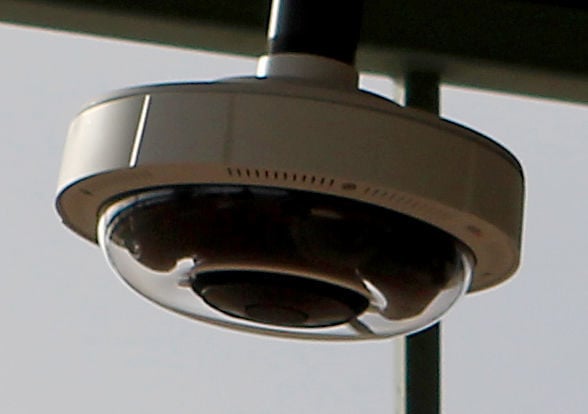 The camera hanging from the band shell in Memorial Park. 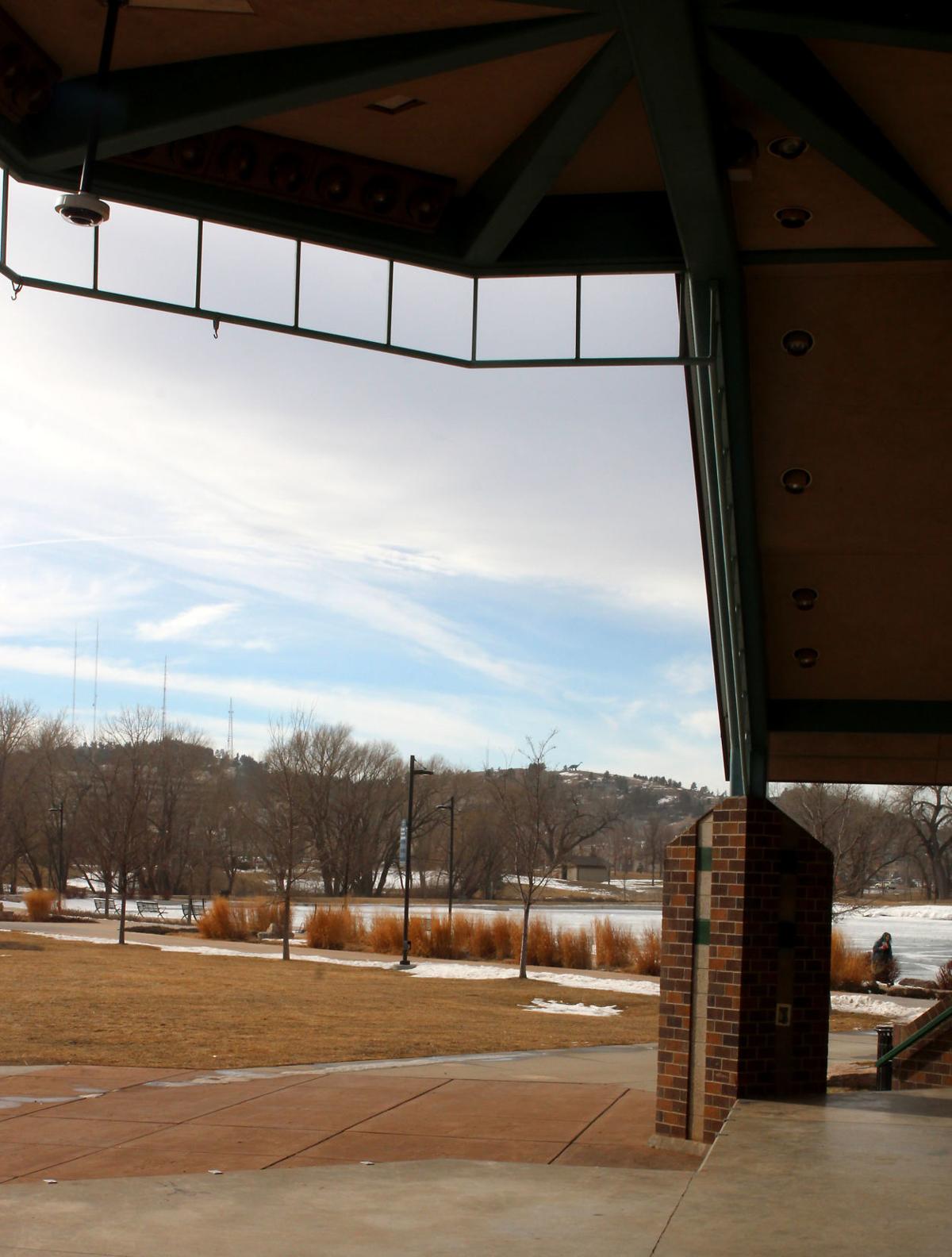 A view of a new RCPD camera from inside the band shell at Memorial Park.

The Rapid City Police Department says it recently installed security cameras in Memorial Park to help prevent and solve crimes that are mostly committed by and against the city's homeless population.

"These incidents have primarily affected our vulnerable, chronically intoxicated population," Brendyn Medina told the Journal on Tuesday. "At times, they are not in the best possible condition to provide detailed information to police. The decision was made to install these cameras as a way to help us hold offenders accountable, with the goal to more effectively reduce victimization."

Medina said officers are noticing an increase in low-level crime and have responded to serious assaults and drownings in the park.

He wouldn't say how many cameras were installed and where they're located because the department doesn't want the devices to be vandalized as they're meant to act as a deterrent.

But one of the circular surveillance cameras can clearly be seen hanging from the ceiling of the band shell.

Lloyd Big Crow Sr. said he saw workers installing something inside the dome-shaped structure last week but he wasn't sure what it was. Big Crow realized it was a camera while he was volunteering last Friday at the weekly feed his group — Oyate Kin Chante Wastepi (People with Good Hearts) — holds at the bandshell.

Big Crow, a 38-year-old who works at a parking lot maintenance company, called the camera an "invasion of privacy" for the volunteers and homeless people who gather to pray, share a meal and distribute sleeping bags, toiletries and other necessities. He said he thinks police officers installed the camera "to try to find reasons to stop" the feed.

Medina said there's "absolutely no correlation between the feeds and the cameras."

"We recognize the group does a good job of maintaining order and picking up trash in the immediate area and time surrounding the event," he said.

But Medina said skirmishes sometimes break out after the feeds and other times at night when people are drinking. He also pointed to two recent drownings in the pond next to the bandshell.

Witnesses said Joseph Twiss, a 45-year-old from Rapid City, jumped in the water around 9 a.m. on June 21 to try to reach the fountain in the center of the pond, Medina said. Someone called 911 after seeing him go under the surface. Police later pulled him out and medics took him to the hospital where he died eight days later.

Police received another 911 call about someone drowning in the pond around 3:27 a.m. on July 2, Medina said. Officers didn't see anyone in the pond so they called the city's water rescue team, which found a body. The victim, later identified as 36-year-old Cody Clifford of Rapid City, was declared dead at the hospital. Witnesses said he had voluntarily entered the water but quickly began struggling to keep afloat.

This isn't the first time officers and other people have raised concerns about violence and danger in Memorial Park. After a hypothermia death and spate of violent attacks and deaths, a police captain, two walkers and two homeless men interviewed in a 2015 Journal article described the park as a safe place during the day but a potentially dangerous one at night.

The decision to install "several" cameras in the past few weeks was made by the police department, the Parks and Recreation Department, and the Civic Center, Medina said.

He said it's the first time the police department has installed cameras in a park, but Parks and Rec has cameras in several parks, including Vicki Powers and Founders parks that officers can access if they need to investigate a crime.

Medina shared data that shows there's been an average of 82 calls to 911 coming from the park between April and December 2019. Calls were as high as 153 in July and as low as 52 in December.

He said the violent crimes are "almost exclusively" committed by homeless people who know their victims. Because alcohol is often a factor, Medina said, the perpetrator and victim may not be able to clearly remember what happened.

Big Crow, who's group also works with youth and elders, said most of the homeless community gets along but agreed that alcohol can sometimes lead to fights. He said he's seen a decrease in the number of intoxicated people at the feeds and their level of intoxication since he started the gatherings in June 2018.

"We're uplifting our own people," said Big Crow, who is Oglala Lakota. He said volunteers act as security during feeds and help clean up afterwards. The group recently began using reusable bowls so they don't generate as much trash.

"We're trying to set an example," he said.

He used to sleep in Memorial Park or at Safe Solutions at the Care Campus, a space for intoxicated people to spend the night. Janis said he saw verbal arguments when he slept in Memorial Park but never violent ones.

"A lot of us stick together, look out for each other," Janis said. He said the homeless community does a a "roll call" each morning by walking along the bike path to check in on each other, a process described to the Journal earlier this month by a woman who found her friend dead in Rapid Creek.

Now Janis is living "place to place" with friends and relatives as he works to save money from his new job at McDonald's. He still attends the 4 p.m. Friday feeds if he's not working.

Janis said he's OK with cameras located elsewhere in the park since they may be able to identify violent perpetrators, but he doesn't think one belongs in the band shell where another group serves free hot dogs on Wednesday.

Both men say they're especially upset that the camera will capture the group praying and smudging before their meals. Big Crow says attendees are instructed not to film or take photos during this time, and the group may decide to move elsewhere because of this.

Janis is also worried that people with warrants may be afraid to attend the feeds.

Medina said officers will only look at cameras if they need to find evidence for a crime.

Big Crow said he doesn't think the cameras will help prevent crime and he would rather see a focus on helping the homeless community address housing needs, trauma and addiction.

The Rapid City Police Department recently installed this camera in the band shell at Memorial Park to prevent and solve crimes.

A security camera hangs from the ceiling of the band shell and next to the pond in Memorial Park in Rapid City.

Lloyd Big Crow Sr., left, and Frank Janis said they're upset that RCPD installed a security camera in the band shell at Memorial Park where free food is served to the homeless community.

The camera hanging from the band shell in Memorial Park.

A view of a new RCPD camera from inside the band shell at Memorial Park.