A federal judge in South Dakota has created strict COVID-19 rules for his courthouse based on vaccination status in an order that again criticizes the U.S. Marshals Service.

The rules will allow unvaccinated deputy marshals to continue their job as a contempt hearing against three high-ranking officials is pending.

Deputies can "basically go to their office and the courtroom" but not into my office like they sometimes do, Aberdeen-based Judge Charles Kornmann told the Journal.

Anyone who is not fully vaccinated must wear a N95 or double mask when they are inside the federal courthouse in Aberdeen, the judge wrote in his order last week. Unvaccinated people must also stay six feet away from others.

Unvaccinated people, even if they are following the mask rules, are not allowed in offices of the judges, law clerks and judicial assistant. They can't enter the library, copy room, jury room or the bathroom next to the copy room.

They can, however, enter the offices of the USMS, court security and clerks. They can also be in the hallways, elevators, conference room and all other bathrooms. 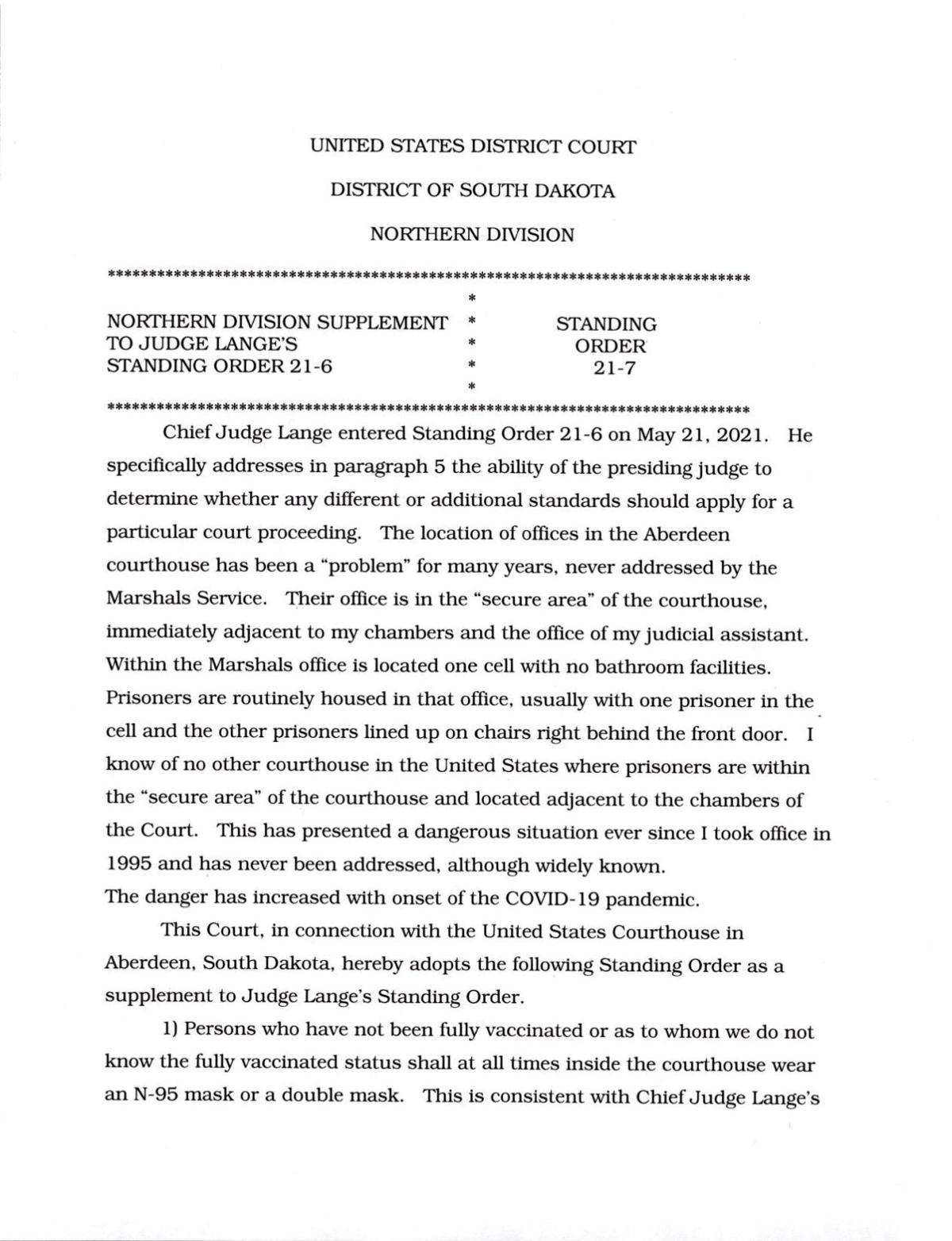 The other federal courts in Rapid City, Pierre and Sioux Falls are following less strict rules set by Chief Judge Roberto Lange that say unvaccinated people must wear any kind of mask.

Lange and Kornmann have floated the idea of a vaccination mandate for all direct courthouse workers and/or visitors, according to emails and documents filed in the contempt hearing.

Kornmann criticized the USMS in his order for allegedly failing to secure the Aberdeen courthouse and said this increased safety risk influenced his strict COVID-19 rules.

"The location of offices in the Aberdeen courthouse has been a "problem" for many years, never addressed by the Marshals Service," he wrote.

Kornmann said the USMS office is in the "secure area" of the courthouse, right next to his office. Deputies usually keep one defendant in the single cell inside the USMS office and have others sit in a row of chairs.

"I know of no other courthouse in the United States where prisoners are within the "'secure area' of the courthouse and located adjacent to the chambers of the Court," Kornmann wrote. "This has presented a dangerous situation ever since I took office in 1995 and has never been addressed, although widely known. The danger has increased with onset of the COVID-19 pandemic."

Kornmann's COVID-19 rules come after he ordered Daniel Mosteller, the U.S. Marshal for South Dakota, and Stephen Houghtaling, his chief deputy, to appear in court on June 14 to explain why he shouldn't hold them in contempt. The order also applies to John Kilgallon, the chief of staff for the national director of the USMS.

Kornmann has accused the trio of interfering with the administration of justice for allegedly ordering deputies not to share their COVID-19 vaccination status and retaliating against him by "kidnapping" defendants from a hearing.

The group has not responded to Kornmann's contempt filing, and the hearing remains scheduled for June 14.