Three organizations representing South Dakota police chiefs, sheriffs and rank-and-file law enforcement officers are joining growing calls for the Attorney General to resign after charges and evidence were released after he fatally hit a pedestrian with his car in September.

"Ravnsborg’s involvement in the death of Joe Boever on September 12th have resulted in a lack of confidence in his ability to effectively carry out his duties as the chief law enforcement officer in South Dakota," the groups said. "We are not commenting on the pending criminal case or impeachment process as we recognize his right to due process." 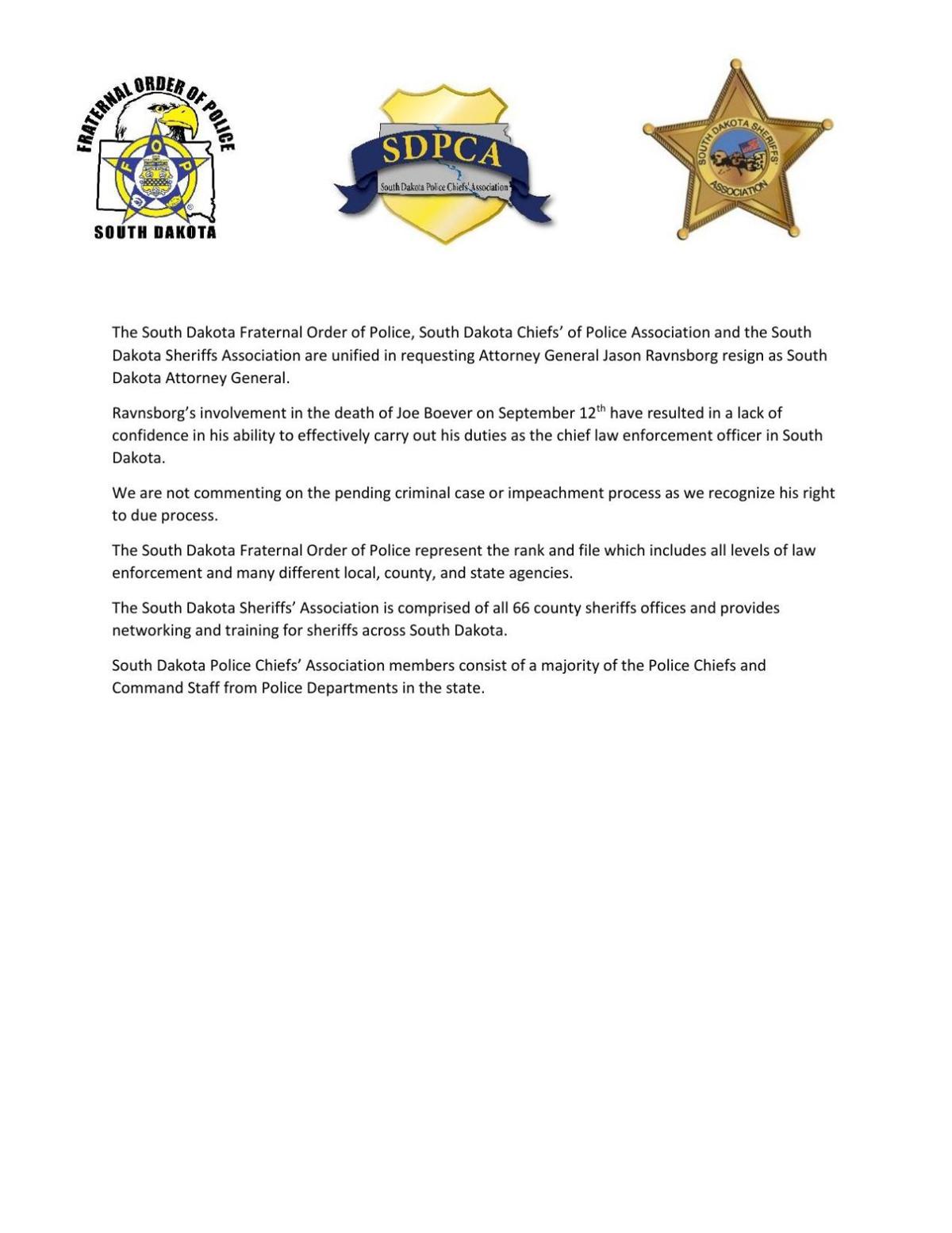 The Sheriffs' Association is comprised of all 66 county sheriffs while the Police Chiefs' Association consists of a majority of the state's police chiefs and command staff. The FOP represents rank-and-file law enforcement across the state

Ravnsborg, 44, was charged last Thursday with three misdemeanors but no felonies after he hit and killed Joe Boever while driving in the shoulder of the highway near Highmore on Sept. 12, prosecutors say.

Others calling for Ravnsborg to resign include Gov. Kristi Noem and the South Dakota Democrat and Libertarian parities.

The South Dakota State's Attorneys Association, comprised of state's attorneys whose offices often collaborate on cases with the Attorney General's Office, is not calling for Ravnsborg to resign.

"As prosecutors, we are always constrained by the facts. At this time, we do not have access to all the facts of this case and believe that any expression of opinion about the disposition of the impeachment effort, the criminal case or the civil case would be inappropriate," the group said in a Friday statement. 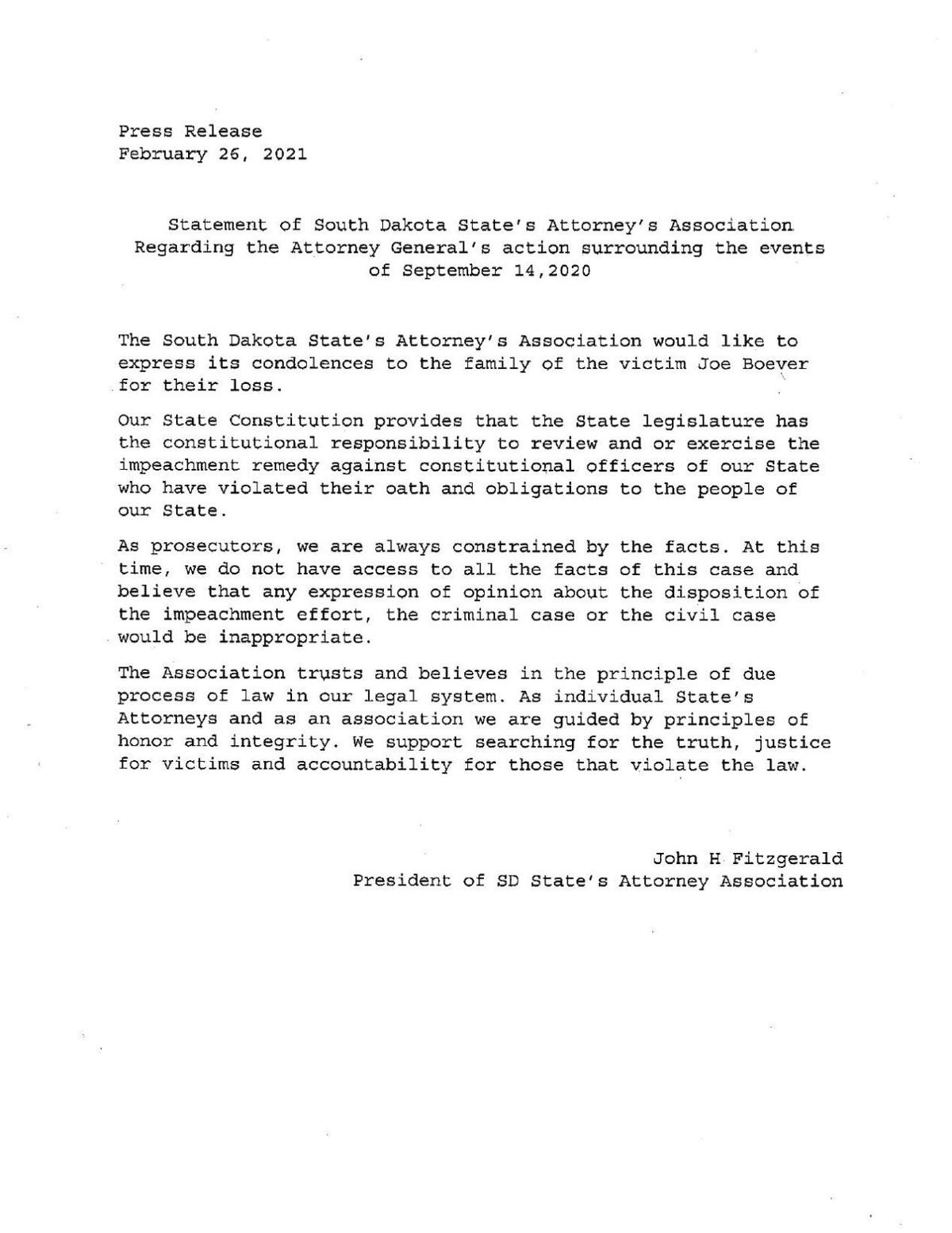 The police chiefs' and sheriffs' associations had previously asked Ravnsborg to step away from his duty of evaluating police-use-force incidents while he was under investigation. The groups will continue to use other evaluators — the Pennington and Minnehaha county state's attorneys — now that he is criminally charged.

This appears to be the only work duty Ravnsborg has stepped away from since the crash.

The attorney general has no plans to resign, his personal spokesman has told the Journal. Ravnsborg's lawyer said he's not available for an interview since he's in transit to South Dakota after being out of town.

Ravnsborg could be forced to leave his office if a bipartisan group of state representatives are successful in their effort to impeach him. A resolution introduced Tuesday afternoon gives two reasons for the impeachment proceedings: Ravnsborg causing the death of Boever and for statements and actions he made following Boever’s death that failed to meet the standard of the Office of the Attorney General.

The impeachment process is currently being formalized, and the resolution will be brought forward in the House next week, according to House Majority Leader Kent Peterson, R-Salem.

Noem said she spent 10 hours on Monday reviewing the case evidence and ordered DPS to release videos of Ravnsborg’s two interviews with investigators on Tuesday.

Noem said reviewing the case drove her decision to call for Ravnsborg to resign on Tuesday after refraining from publicly doing so during the investigation and after the charges were announced last week. She has rejected reports that she privately told Ravnsborg he should resign in the days after the crash.

Ian Fury, Noem's spokesman, did not respond when asked why the governor only started reviewing and releasing the evidence this week rather than in the months before since the secretary of the Department of Public Safety said on Sept. 15 that he would “release the investigative report as soon as it is complete."

Rep. Will Mortenson, R-Pierre, filed the articles of impeachment against Ravnsborg soon after Noem's call for Ravnsborg to resign.

Noem said Thursday morning that she would release more evidence but her plans were halted by the afternoon when the judge overseeing Ravnsborg's case ordered her to stop releasing any more evidence and to delete the two interview videos that were already shared.

The judge did not explain his reasoning but a motion filed by Ravnsborg's defense lawyer argued the videos and any further evidence will prevent his client from obtaining a fair trial. The lawyer also shared that the prosecutor had unsuccessfully tried to stop Noem from releasing the videos on Tuesday.

The videos revealed new allegations about the crash, such as that Boever was walking with a flashlight, crashed head-first through Jason Ravnsborg’s windshield, left behind broken glasses in his car, and then came to rest near the side of the road next to the flashlight that remained illuminated.

The investigators told Ravnsborg that if he had been paying attention, he should have seen Boever before, during and after the crash. They appeared more skeptical than prosecutors about Ravnsborg’s driving and insistence of never seeing Boever.

Ravnsborg is charged with unsafely driving outside a lane and careless driving in relation to hitting Boever. He's also charged with using his phone while driving before the crash occurred.

Ravnsborg, who received a summons rather than being arrested, has not yet been scheduled for an initial court appearance. ​