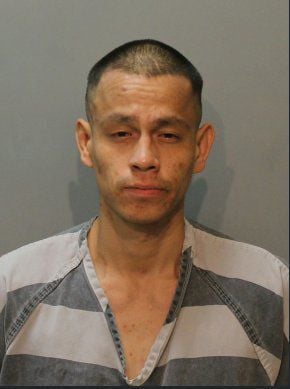 Police and medic vehicles park outside a Rapid City home where first responders found three people with serious injuries from an assault.

The man accused of severely beating three people in a Rapid City house and killing one of them was arrested Thursday afternoon.

Allac "AJ" Dismounts Thrice, a 28-year-old from Rapid City, was arrested around 4:30 p.m. in Box Elder and charged with one count of first-degree murder and two counts of attempted first-degree murder, according to a news release from the police department.

Dismounts Thrice is expected to appear in court on Friday morning for allegedly killing Richard Montanez, a 39-year-old from Rapid City, and leaving two women in “critical condition with life-threatening injuries.”

He faces the death penalty or life in prison without parole if convicted of the murder charge.

"The collective sympathies of the RCPD go out to the family members and friends of those affected by the recent violent events in our city," Police Chief Don Hedrick told the Journal. "We hope members of the community can continue to work together with the RCPD to show that our city is not defined by this type of senseless violence."

Police learned about the assault when someone called 911 around 11:15 a.m. on Thursday to report an attack that occurred inside a home on the 500 block of East Monroe Street, spokesman Brendyn Medina told the Journal.

"Upon arrival our officers found three victims with very serious, life-threatening injuries — injuries consistent with a blunt-force trauma," Hedrick said in a video from the scene.

The two women and one man were taken to the hospital, he said.

“It’s certainly exceptional” for someone to seriously harm multiple people without a knife or gun, Medina said.

"This was not a random act of violence" since Dismounts Thrice knows the victims, Hedrick said.

Hedrick said police learned Dismounts Thrice was at the home during the assault before leaving on foot and Medina said officers went “out scouring the city” for him.

Someone then called 911 around 4:30 p.m. to report a suspicious person entering vehicles and storage sheds on private property in Box Elder, the release says.

"This is an excellent example of high-level collaboration from area law enforcement agencies," Hedrick said of the cooperation between the two police departments and sheriff's office.

Dismounts Thrice was taken into custody and shortly after police learned that Montanez had died, according to the release.

Anyone with information should call police at 605-394-4131 or send an anonymous tip by texting the letters 'RCPD' and the information to 847411.

Law enforcement is still working to identify the suspects who killed four people — three by gunfire and one by blunt force trauma — during three incidents throughout August. A fourth fatal shooting is under investigation as a possible homicide.

"We've been working around the clock in regards to these instances," Hedrick said in the video. "We're asking for help from the public. If you know anything in regards to any of the violence in our community recently, call us."

Willie Whelchel, chief deputy of the sheriff’s office, said people with information about the incidents should call to share it, even if they're not sure it will be helpful. ​

A man and woman accused of killing people with their cars have pleaded not guilty to involuntary manslaughter in federal courts.

Police and medic vehicles park outside a Rapid City home where first responders found three people with serious injuries from an assault.