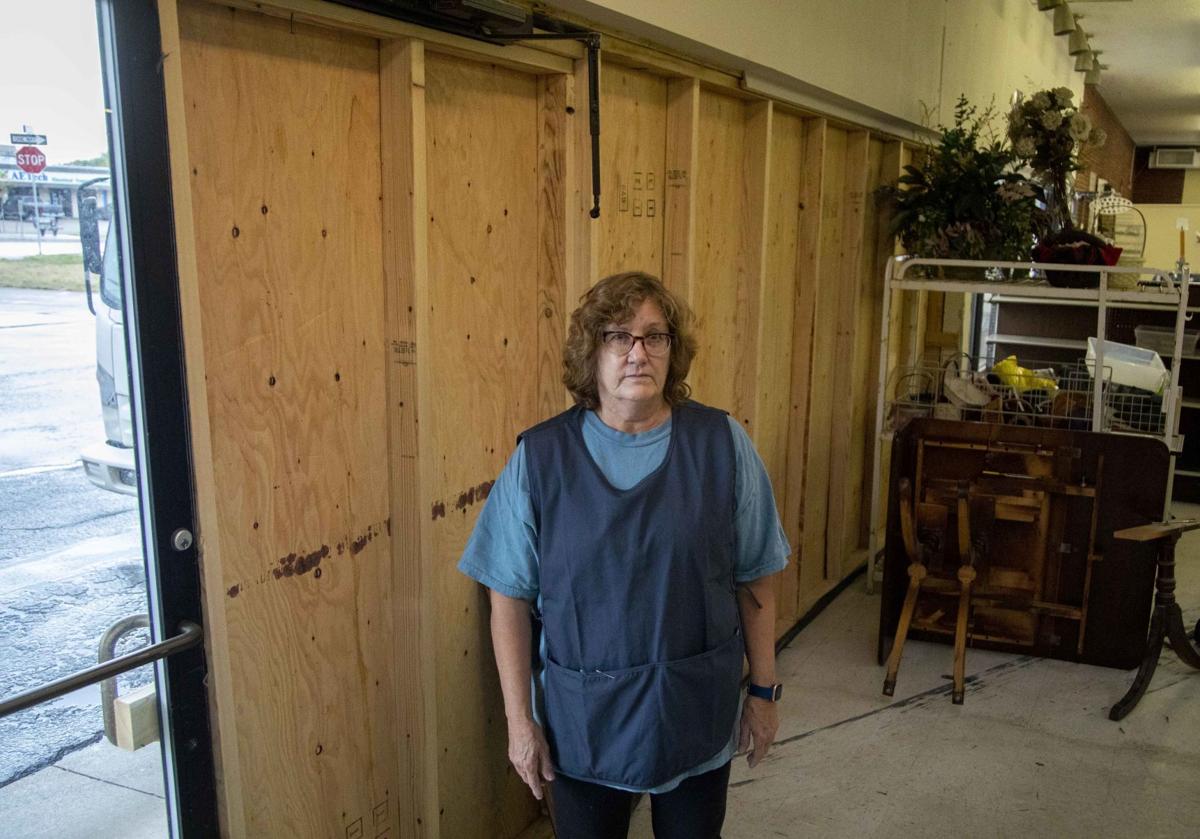 Manager Dorothy Young stands Wednesday in the We Care Thrift Store by a temporary wall where a drunken driver crashed into the store Monday in Rapid City. 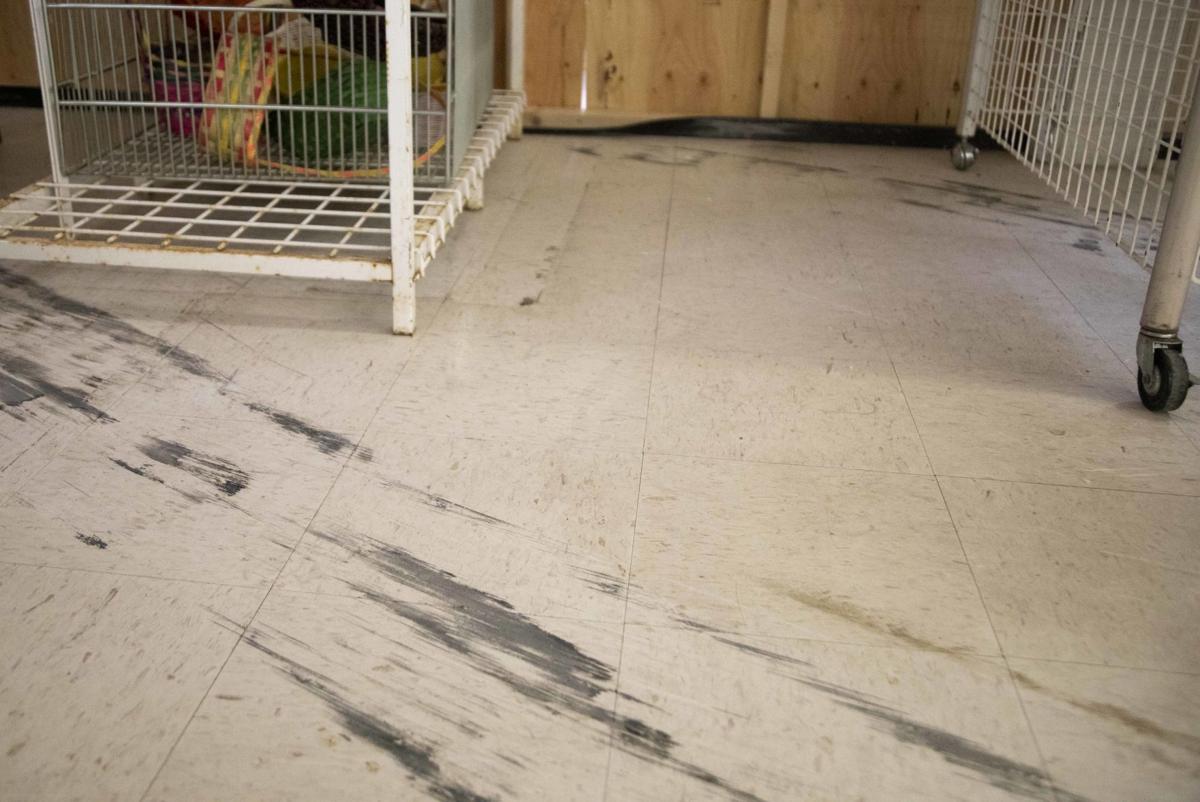 Tire marks are visible Wednesday on the floor of the thrift store. 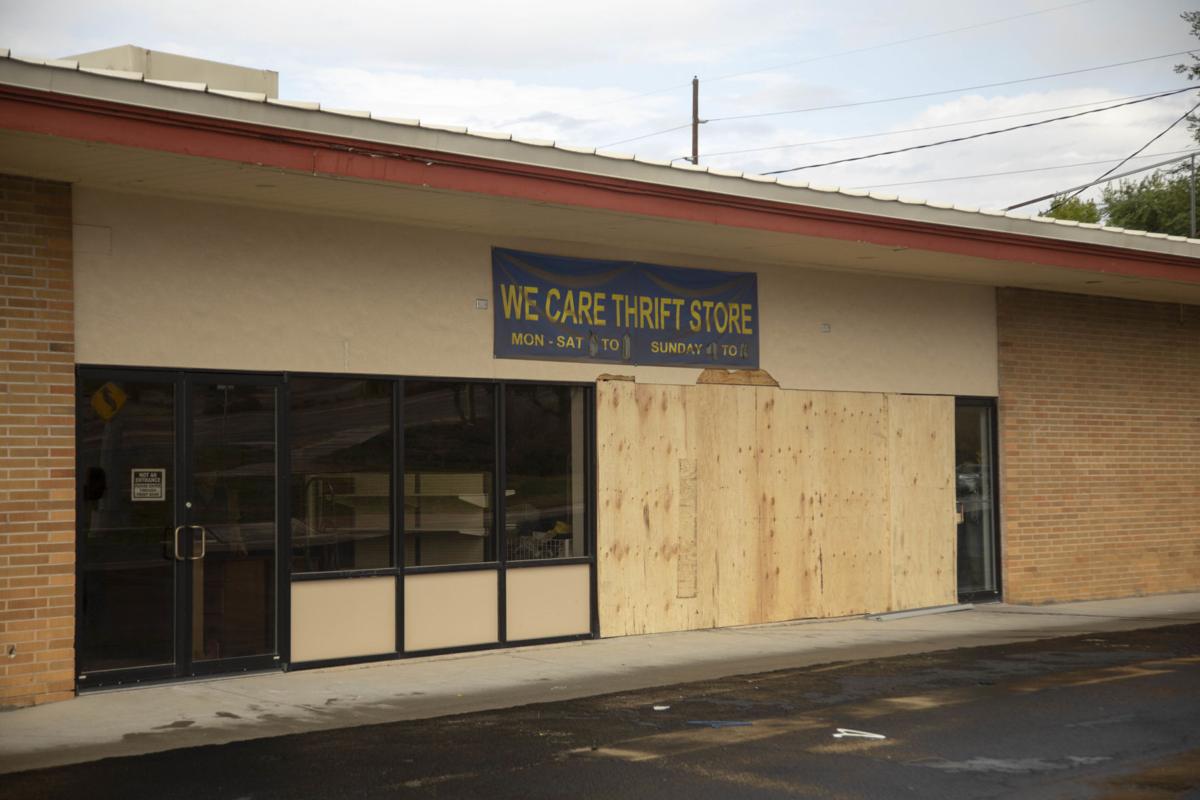 Boards cover the gap in the side of We Care Thrift Store where a drunken driver crashed on Monday morning. 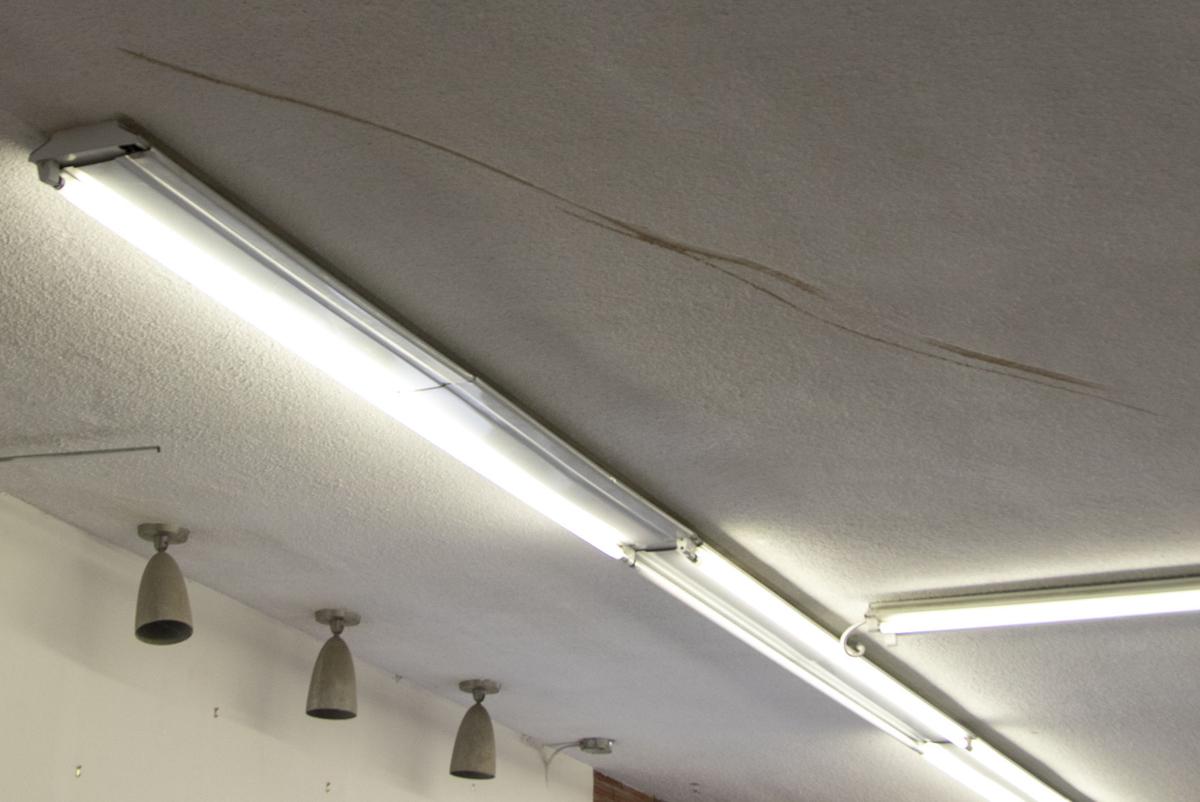 Marks show on the ceiling from lighting fixtures that were dragged by a drunken driver's car when it crashed into the store.

Fifteen minutes after Dorothy Young locked the doors to We Care Thrift Store in north Rapid City after completing a weekly cleaning, an allegedly drunken driver plowed through one of the store's walls in a pickup.

Young, We Care Thrift's store manager, was driving by the store Monday when she saw the truck and its driver stopped by an officer with the Rapid City Police Department moments before seeing the gap in the wall of her store.

"I thought, 'Oh my god', so I made a beeline to the store," Young recalled. "I was in disbelief."

According to the police report, Melissa Wolf Black of Rapid City drove through the wall of the We Care Thrift Store at 401 E. Boulevard North at 11:30 a.m. Monday.

Black was charged with driving under the influence, leaving the scene of an accident, and driving without a license before being transported to the Pennington County Jail.

Luckily for the staff and patrons of We Care Thrift, the store is closed for cleaning on Mondays and was vacant at the time of the crash.

"It didn't seem real," Young said. "It's something we didn't need, but everything happens for a reason. We just haven't figured that out yet. Had the employee and I stayed like we usually do, we might not be talking to you today. She ran right into a shopping area. We must have some good karma from doing something."

Young said at that time during any other day of the week, the store would have as many as 20 people perusing clothing racks.

"People shop clothing racks; that would've taken down some people for sure," Young said of the crash.

Young said Fair Deal Pawn owns the building, but the costs to replace the fixtures and shelving damaged by the truck will come out of the thrift store's pocket.

Volunteers have devoted many hours to cleaning and making repairs to the store since Monday, which will allow the store to reopen Thursday.

"We lost a lot of our shelving. We'll just make due with what we have," Young said. "If anyone has shelving they can donate that would be great. The woman who ran through the wall didn't have any insurance so there won't be anything to get."

A dumpster full of mostly glass and debris had already been filled and taken off site by Wednesday morning, Young said.

"We've had a lot of people reaching out wanting to help. We've had customers call to ask what can I do to help," she added.

Last year the thrift store closed down for three months due to COVID-19 and was remodeled.

"What good that does us now? I don't know," Young said.

The thrift store first opened its doors seven years ago, according to We Care Thrift employee Kathy Ferrigno.

Ferrigno said she and Young worked at another thrift store in Rapid City prior to opening We Care Thrift.

Young said she opened the store at its current location after realizing the need for it there.

"There really isn't anything walkable and a lot of people don't drive in this neighborhood," Ferrigno said. "Our free clothing giveaway that we do helps a lot of people. I think this thrift store has been good for this end of town."

A grandmother’s campaign plants over a million trees in Mexico

Manager Dorothy Young stands Wednesday in the We Care Thrift Store by a temporary wall where a drunken driver crashed into the store Monday in Rapid City.

Tire marks are visible Wednesday on the floor of the thrift store.

Boards cover the gap in the side of We Care Thrift Store where a drunken driver crashed on Monday morning.

Marks show on the ceiling from lighting fixtures that were dragged by a drunken driver's car when it crashed into the store.