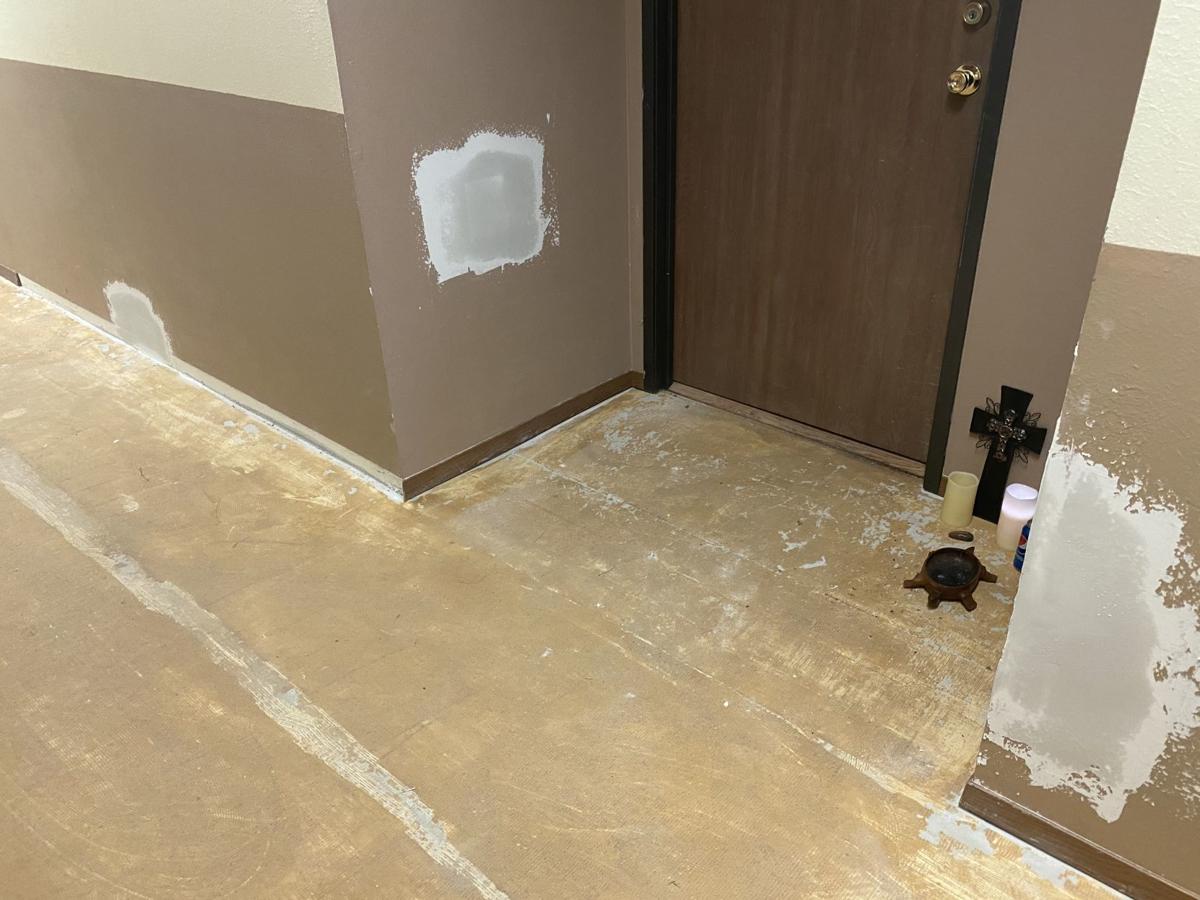 Three spots of fresh plaster cover the walls next to the doorway where David Iron Horse was found shot dead. 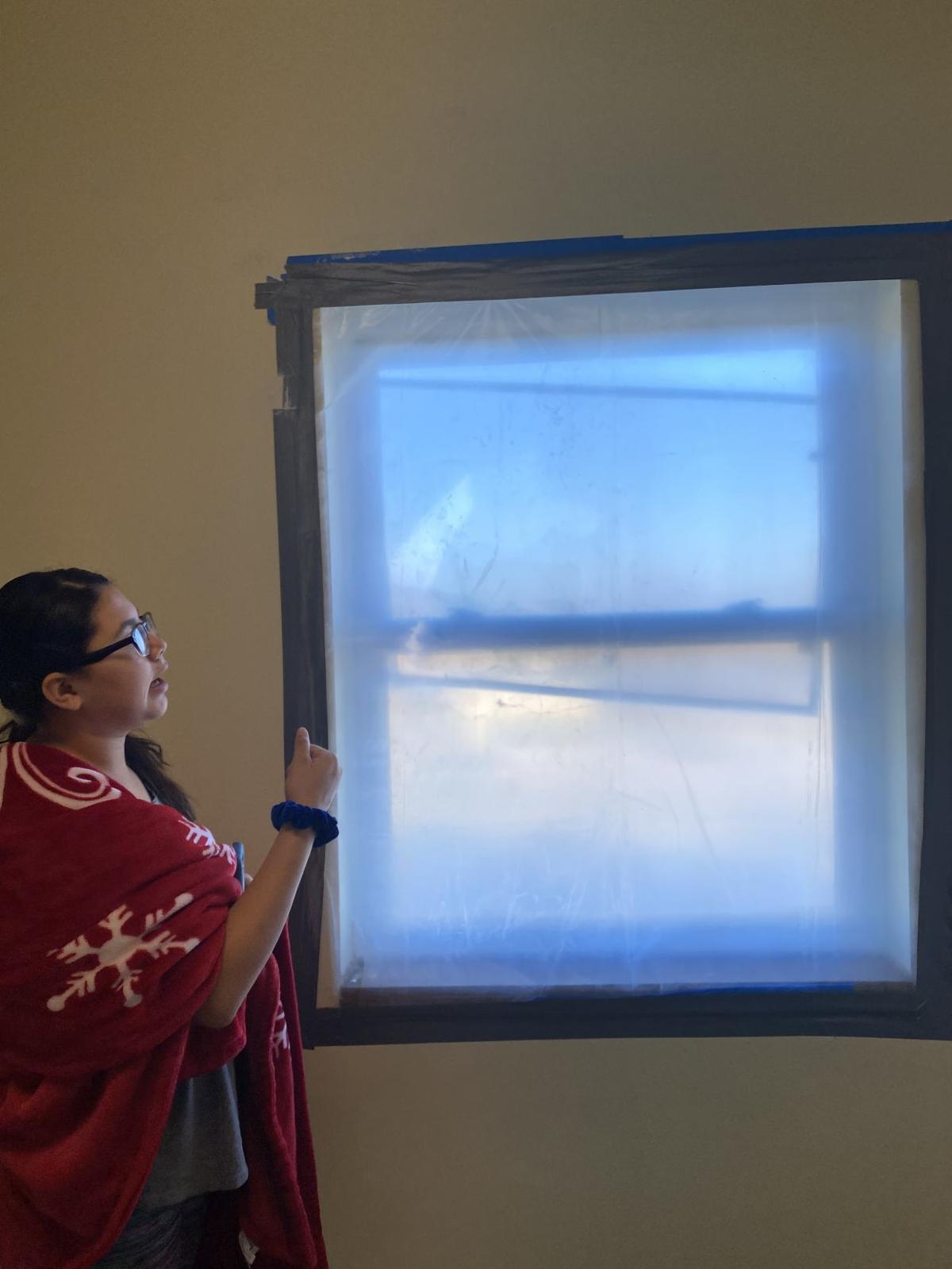 Gianna Patton, 12, points to a window at the top of the stairway that the gunman may have broken while shooting at officers outside the building. Patton's grandfather David Iron Horse was fatally shot outside their apartment. 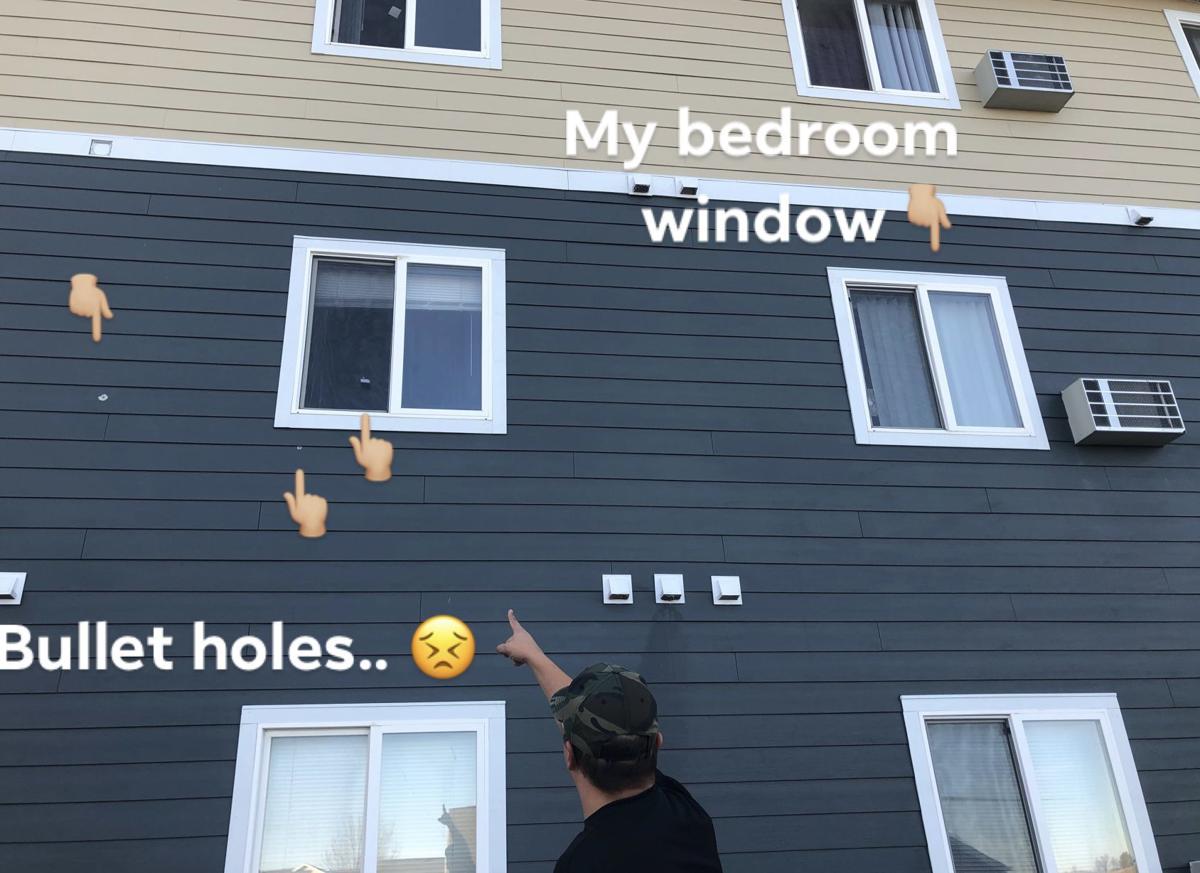 ​Kevin Pederson, Jr. points to the bedroom he shares with his wife and baby, and to three bullet holes coming from their neighbor's apartment. 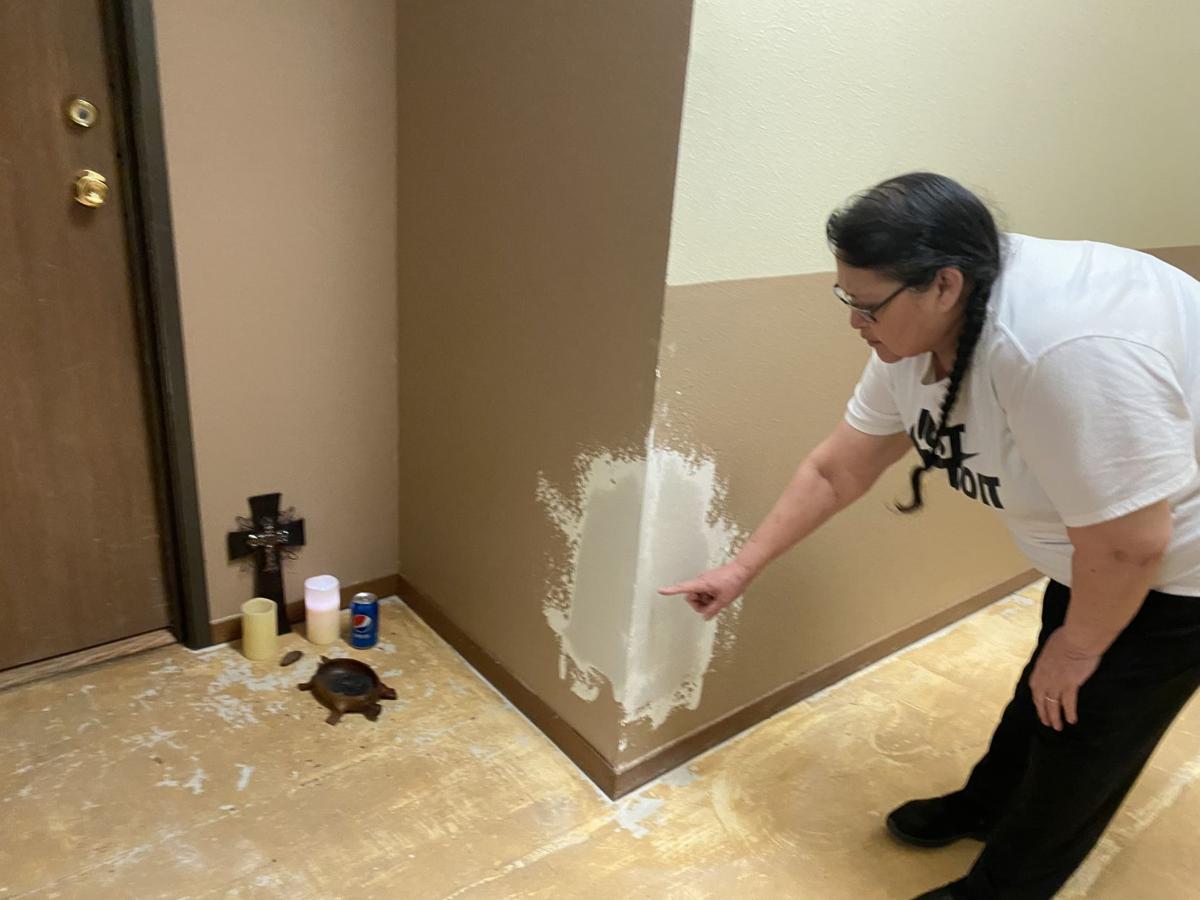 Loveletta Iron Horse points to fresh plaster covering the wall outside her apartment. The carpet has been ripped out of the hallway where she found her husband shot dead.

A bullet-ridden apartment, interviews with victims' loved ones and statements from police paint a picture of a random, terrifying and chaotic shooting that left three people dead Sunday in Rapid City.

"It was like we were in a war zone. It was so, so loud," said Loveletta Iron Horse, who's husband David was shot to death.

"It sounded like a shootout was going on," said Gabrielle Pederson, who lives in the apartment next to the alleged gunman. "It sounded pretty random, it sounded like he was just going to shoot whoever is in his way."

It's "pretty apparent that this guy was out to hurt people," Brendyn Medina, spokesman for the Rapid City Police Department, said when asked if he thinks the gunman was trying to conduct a mass shooting.

"This was an active shooter situation, and the gunman’s actions made it clear that he was intent on harming others," Assistant Chief Don Hedrick said in a previous news release.

David Iron Horse, 64, died from multiple gunshot wounds on the second floor of 851 East Minnesota Street after he was shot by 29-year-old Patrick Alden, according to the news release. Alden, who also shot toward officers and hit a police vehicle, was then fatally shot by an officer who came across him in a stairway with a rifle, the release says. Thomas Trout, 81, died from health issues that were exacerbated by the stress of the shooting and evacuation, according to the release and his wife.

The Sunday afternoon shooting happened in one of the several buildings that make up the Southern Cross Apartments. By Tuesday morning, the carpet on the first and second floors and in the northern stairway had been ripped out.

It's unclear exactly how many bullets were fired, and how many came from Alden versus Officer Garrett Mastin.

Medina previously told the Journal that he doesn't know if Mastin fired at Alden once or multiple times. He also said he doesn't know if Alden had fired at Mastin and other officers while they were in the stairway together. Medina said these are details that the South Dakota Division of Criminal Investigation will investigate.

Tim Bormann, spokesman for the Attorney General's Office which oversees DCI, told the Journal Tuesday that he doesn't know this information off the top of his head. He did not immediately respond to an email asking DCI investigators for this information.

DCI typically releases investigations into police shootings — and the Attorney General announces whether they were justified or not — within a month.

Gabrielle Pederson, 32, said she was out shopping for milk for her 1-year-old son on Sunday afternoon when she received a text from her husband Kevin saying that their next-door neighbor was yelling. She returned to her second-floor apartment around 5 p.m., put her son in his crib next to her bed and started packing for a trip. She then heard a man yelling followed by three or four gunshots coming from the adjacent apartment.

Gabrielle said she picked up her crying baby and 6-year-old daughter and told them to hide in the bathroom. She found Kevin on the porch communicating with police officers about the gunfire. She peaked out the front door, saw her neighbor Olivia Zwetzig, and asked if she heard the gunshots but Zwetzig said she hadn't. Gabrielle's recollection of the conversation mirrors what Zwetzig previously told the Journal.

The couple decided to evacuate because they were afraid the gunman might shoot through the wall into their apartment. Gabrielle said she grabbed extra diapers and a bottle while Kevin held the two children as they cracked open the door. They saw a police officer at the top of the north stairway who told them to go down the stairs. Gabrielle said she never saw the gunman, David, blood or bullet holes as they ran down the hallway and stairs.

Once they were downstairs, Gabrielle said, another officer told them to get away from the building. She said they got inside their car and then heard the fire alarm go off, "a shootout," and glass break before driving behind the garage. Gabrielle said she couldn't tell if the gunfire was coming from one or multiple weapons.

She said her family couldn't immediately return to their apartment since detectives were working through the night, and even though they're allowed back now, they plan to stay with family or in hotels for a while.

Gabrielle said she's "a strong, resilient woman" but is a little nervous about walking up that stairway everyday and who might move in next door. And Gabrielle said her daughter is also impacted by the shooting since she began shaking and crying when she heard a balloon pop while preparing for a New Year's party on Tuesday morning.

The apartment building is usually safe and quiet, Gabrielle said, and she's thankful the officers arrived so quickly and kept them safe.

Gabrielle never met Alden but would sometimes hear him play loud music at night. And she met his siblings when she returned to gather items on Monday.

She said the siblings apologized for what happened and told her that Alden was a Marine Corps veteran who had schizophrenia but hadn't been taking his medicine. They also said he had been drinking on Sunday and their parents were in the apartment during the shooting.

"I realize he’s a person and they lost their brother too," Gabrielle said. He terrified us but "was someone who needed help."

Loveletta Iron Horse, 62, said her husband David was watching football in the living room on Sunday while she and three of her grandchildren were in their rooms. She heard police sirens and the fire alarm go off so she called 911 and the dispatcher told her to stay put because there was an active shooting.

"Then I heard two gunshots," she said.

Loveletta said she and her 15-year-old granddaughter Jessica Patton went to the living room but David was no longer there. When they opened the door he was on the ground with twp bullet wounds to his left chest and stomach. She said police were surrounding David with their weapons and yelled at them to go back inside.

Loveletta said she and Jessica vomited while the family screamed and cried as they hid during the gunfire that followed. She said it sounded like multiple guns were involved.

Once the shooting was done, Loveletta said, officers broke down her door and she could see blood on the ground since they already took her husband to the ambulance. She said she wished the officers spoke more calmly during the incident, and that they had knocked rather than kicked open the door.

An investigator later called her to say David was shot four times, Loveletta said, so she thinks the other two wounds must have been on his back. And she thinks her husband must have gone into the hallway to see what was causing the fire alarm.

Loveletta and a large group of relatives gathered at her house on Tuesday said they don't know anything about the gunman. But Loveletta said she thinks he was the one who pulled the fire alarm, and that he did it to lure people into the hallway.

"I think he was on a suicide mission, the way everything took place," she said.

Loveletta said she and the four grandchildren who live with her will have to move because she visualizes her wounded husband each time she enters the apartment.

"Every time you walk into this house, it reminds you of how he looked just lying by the door and the cops just surrounding him, seeing the bullet holes inside of him," she said as tears fell down her face. "Who would have thought that would ever happen to him?"

Clo Trout, 78, said she and her husband Thomas saw police lights, heard the fire alarm go off and heard several gunshots from their first-floor apartment.

She said three or four officers came to their door to say they had to evacuate. Clo said they couldn't since she uses a walker and Thomas uses oxygen for a lung disease and recently returned from a hospital stay for pneumonia.

But the officers said they needed to leave, brought them their jackets, helped them walk to their truck, and said an ambulance would come meet them, Clo said.

She said Thomas left his truck window open so he could communicate with officers. When she told him to close it since it was cold, he didn't answer.

"I reached over and I knew he was gone," Clo said. "His heart gave out, probably from the shock and the cold air and the wind was so hard on his lungs."

Clo said she waived down medics who tried to revive Thomas. She said the medics and officers were all very kind and helpful, and she's not upset that the officers told them to evacuate.

"They did what they had to," she said.

Clo said the shooting, evacuation and death of her husband was an emotional experience.

"It's pretty traumatic. I hope no one ever has to go through that," she said.

Three spots of fresh plaster cover the walls next to the doorway where David Iron Horse was found shot dead.

Gianna Patton, 12, points to a window at the top of the stairway that the gunman may have broken while shooting at officers outside the building. Patton's grandfather David Iron Horse was fatally shot outside their apartment.

​Kevin Pederson, Jr. points to the bedroom he shares with his wife and baby, and to three bullet holes coming from their neighbor's apartment.

Loveletta Iron Horse points to fresh plaster covering the wall outside her apartment. The carpet has been ripped out of the hallway where she found her husband shot dead.