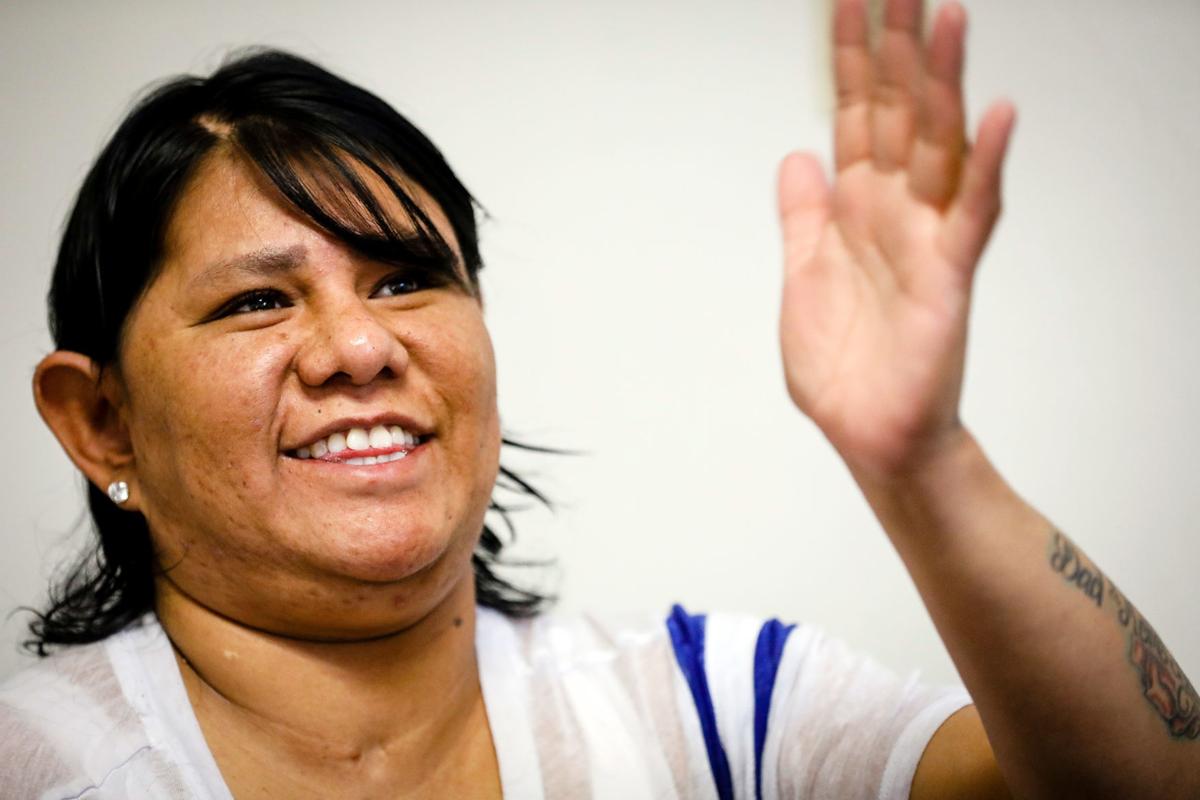 Sheena Between Lodges demonstrates how she can't see her hand after brain damage and surgeries left her without peripheral vision in her left eye. 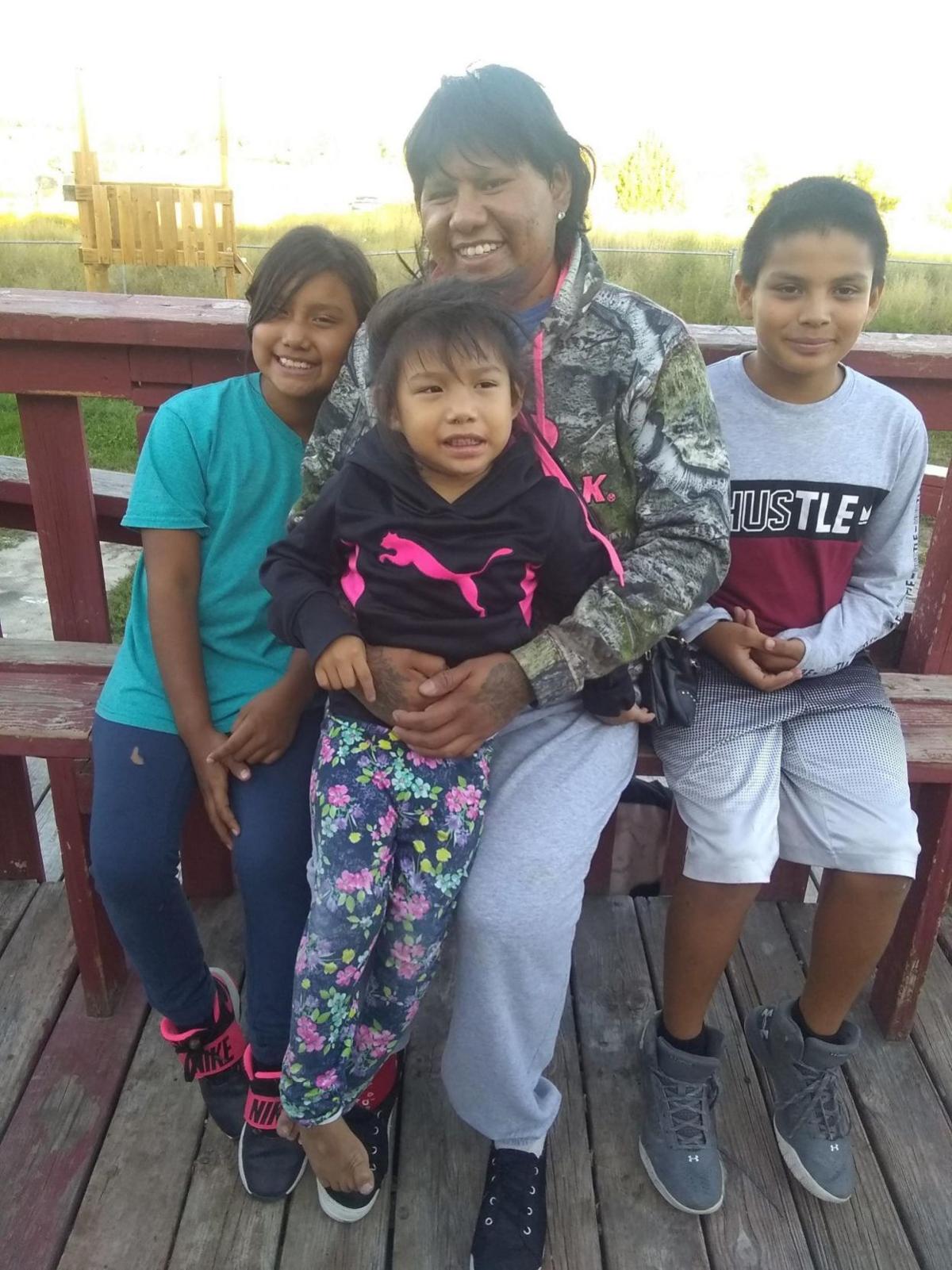 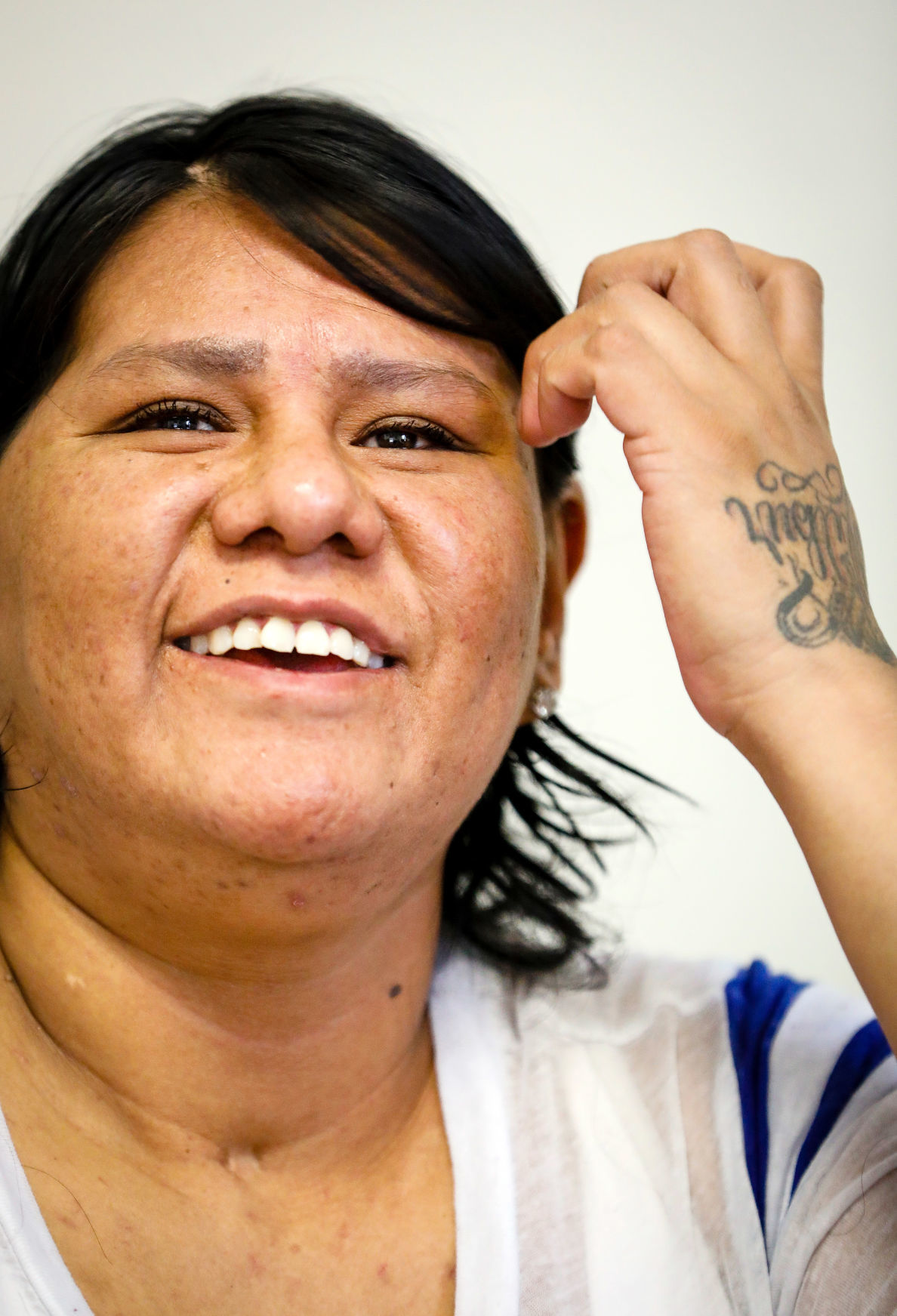 Sheena Between Lodges speaks about her recovery and path forward with her tracheotomy scar clearly visible on her throat. 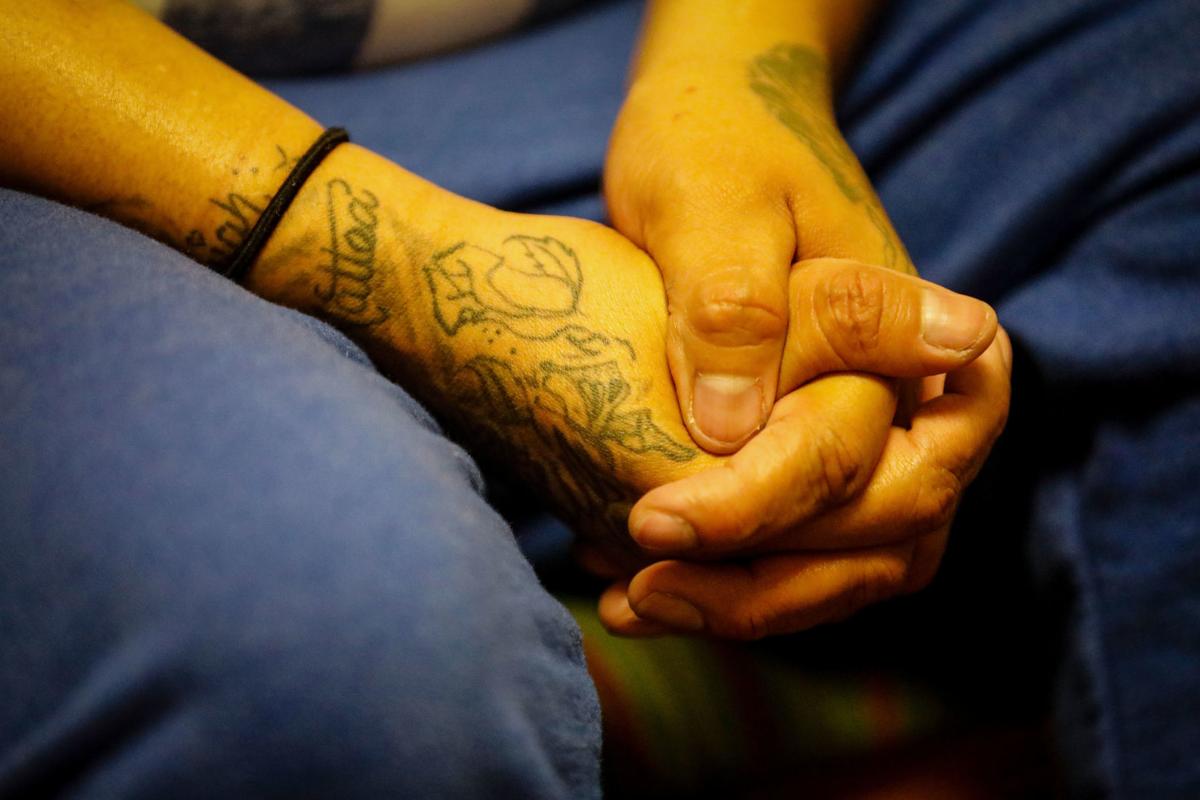 Sheena Between Lodges clasps her hands together while speaking about her recovery. 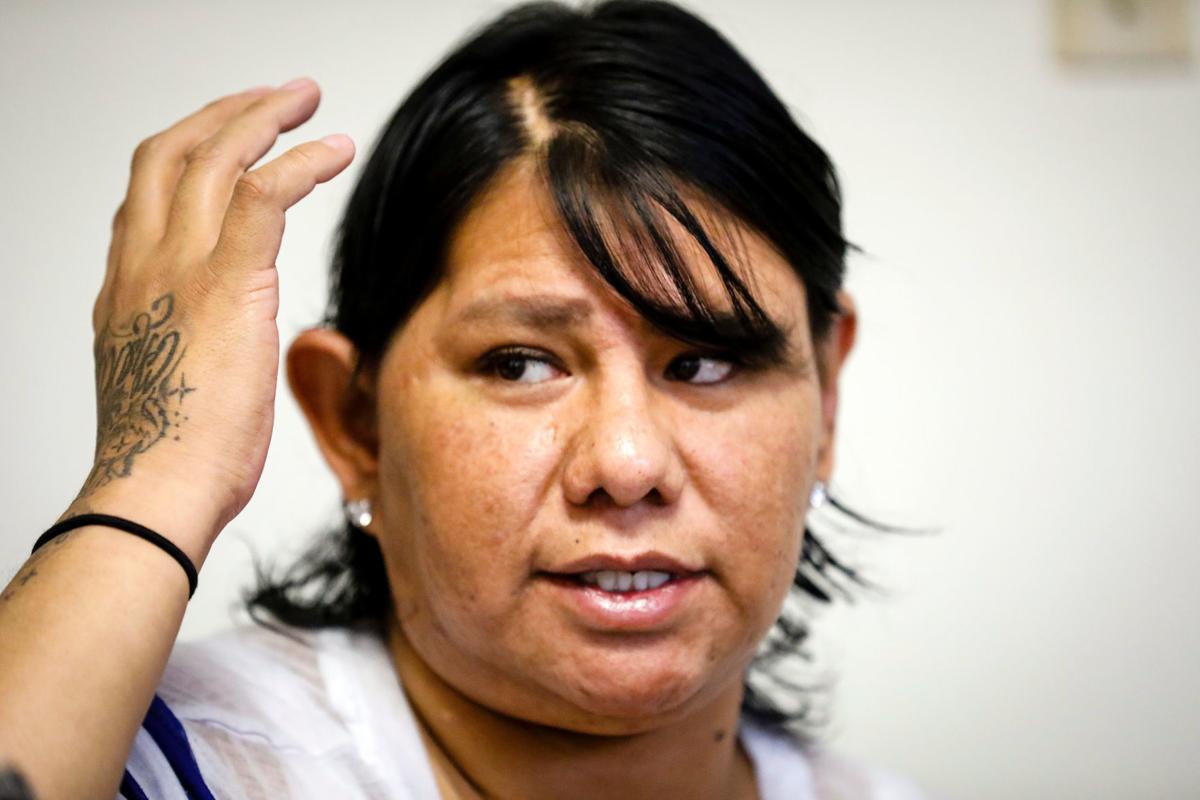 Sheena Between Lodges talks about having a portion of her skull removed to help her brain heal. 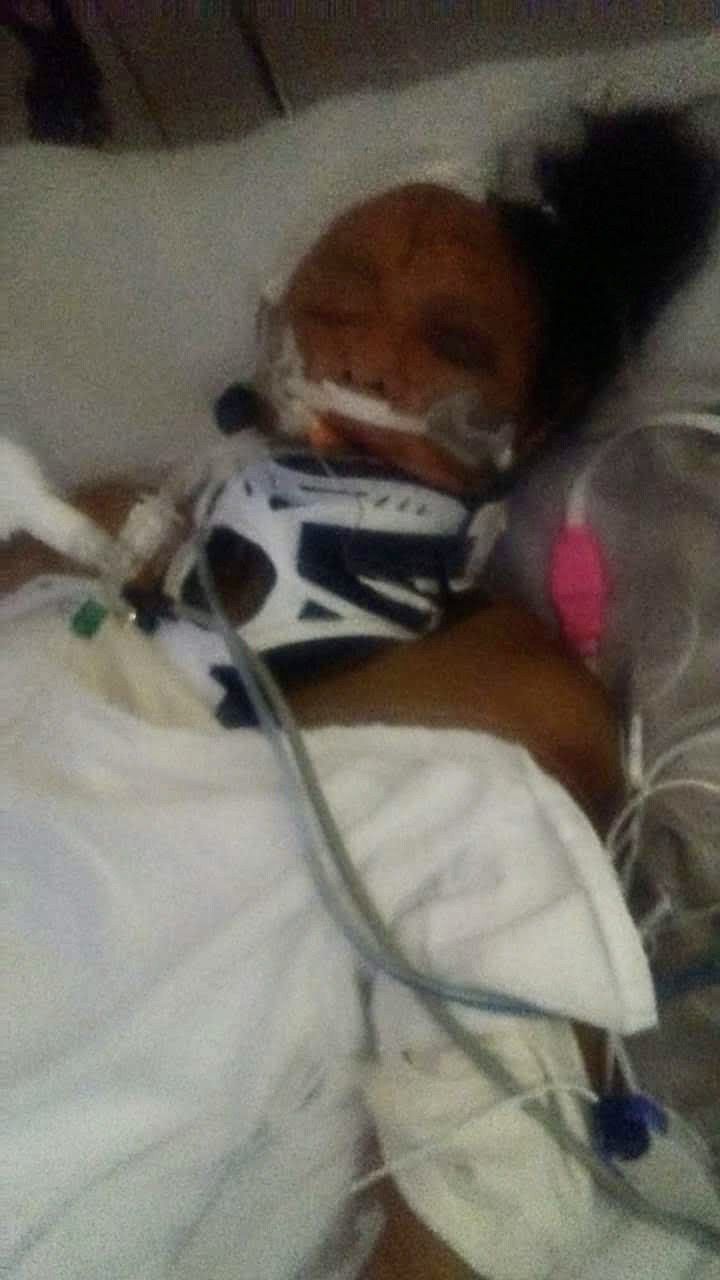 Sheena Between Lodges is pictured in a coma at the hospital. Part of her head was shaved so doctors could remove part of her skull to help reduce brain swelling.

A little over a year ago, Sheena Between Lodges woke up from a coma at the Rapid City hospital not knowing where she was or what she was doing there.

"It was really terrifying," the 33-year-old said. "I had no memory of how I ended up there, why I was in there."

Nurses told Between Lodges where she was while family and detectives told her she was nearly beaten to death. But brain damage caused her to forget those details each time she woke up for the next few weeks.

"I'd get up in the middle of the night and just start crying, just bawling," Between Lodges said during a recent interview in Rapid City.  "The nurses would have to come in and calm me down."

Now, after brain surgeries that removed and replaced part of her skull, physical therapy to re-learn how to write and walk, testifying at a trial where a conviction was later overturned, and lingering memory and vision problems, Between Lodges is moving forward, motivated by her love for her children, support from her friends and family, and a new sober lifestyle.

"I was fighting for my life. If it wasn't for my strong will, my kids, and all of the support and prayers for me, I wouldn't be here today," she said.

The last thing Between Lodges remembers before waking up in the hospital on Nov. 12, 2018, was hanging out at a bar in Oelrichs with her cousin Weldon Two Bulls, ex-boyfriend Gilbert Lakota and Lily Larvie, Lakota's sister.

"After that I don't remember" anything, she said.

Between Lodges said that detectives told her she was found Nov. 5, 2018, in the Pine Ridge home she shared with Lakota after he called 911 to say she was unresponsive. She had been lying there unconscious since Nov. 2 after Lakota and Larvie beat her up, federal prosecutors said in court and documents.

Between Lodges was found with two black eyes, "extensive" head-to-toe bruising and "as near to death" as possible, prosecutor Cassandra DeCoste said at the federal court in Rapid City.

Doctors at the Indian Health Service hospital in Pine Ridge found Between Lodges was having seizures and that her brain was bleeding so they transported her by helicopter to the Rapid City hospital so neurosurgeons could remove part of her skull to drain the blood and let the swelling go down, DeCoste said. Doctors weren't sure if she would ever wake up.

Between Lodges had a traumatic brain injury and was in a coma until Nov. 12, 2018, her family told Indianz.com at the time. She told the Journal that she stayed in the hospital until mid-February 2019 before doing in-patient physical therapy through March.

Physical therapy was "challenging," but "I kept pushing myself every day," she said.

Between Lodges has made a remarkable physical and mental recovery but has some permanent damage. She has a scar on her throat after doctors inserted a tube to help her breathe, no peripheral vision in her left eye, and sometimes has problems recalling memories from both before and after her brain injury.

The memory difficulties test Between Lodges' patience. And they've left her unable to work so she receives disability payments to help support her two daughters and younger brother she's raising in a home she shares with her best friend Dusty LeBeau on the Pine Ridge Reservation.

While DeCoste said in documents and in court that Lakota and Larvie attacked Between Lodges, they were never charged with the crime. But Two Bulls was charged with being an accessory after the fact for allegedly covering up the beating and making a false statement for allegedly telling a detective he was too intoxicated to remember what happened to his cousin.

Defense lawyer Jennifer Albertson said during the March 2019 trial that Between Lodges' injuries may have been from a fall, not a beating, since she was "drunk all the time," and that DeCoste needed a guilty verdict from Two Bulls so they can use him to go after Lakota and Larvie.

But the doctors who treated Between Lodges found that her injuries were consistent with someone who was strangled and beat with a blunt object, court records show.

Between Lodges told the Journal that she testified during the trial but couldn't say what happened due to her memory gap. But she told the jury that Lakota and Larvie attacked her in the past, and that Two Bulls had witnessed and intervened in some of those incidents.

She said she never reported the previous abuse because at the time she thought it would be best to stay quiet for the sake of her and Lakota's daughter. Between Lodges would call her friends and family for help but never reported the abuse to police, a relative said in a November 2018 article on Indianz.com.

After a two-day trial, the jury convicted Two Bulls for making a false statement and deadlocked on the accessory charge. But in a rare move, Judge Roberto Lange overturned the conviction a month later.

Then, in November 2019, Lange dismissed Two Bulls' accessory charge at the request of both Albertson and DeCoste. Lange said DeCoste could re-file the charges at a later date.

"He was supposed to be my blood but yet he chose to have their backs, not mine," Between Lodges said of her cousin's decision to allegedly not admit what Lakota and Larvie did.

But Between Lodges says she doesn't dwell on the fact that no one has been convicted in her case because she never counted on that to happen.

"From the beginning, I knew nobody was going to get arrested ... I've seen it happen before" to other domestic violence victims, she said. "Law enforcement, they fail a lot of women" and witnesses sometimes don't speak up.

But "the truth will come out, they'll get judged someday," Between Lodges said.

Prosecutor Gregg Peterman, who oversees the U.S. Attorney's Office in Rapid City, said he can't discuss the specifics of the Between Lodges case beyond saying it "remains open."

Generally speaking, he said, it's important to remember that suspects can't be forced to speak with law enforcement or testify at trial, and that prosecutors can only charge people if they believe a 12-person jury will find them guilty beyond a reasonable doubt.

He said it's helpful, but not always necessary, when cases have corroborating evidence such as statements from the victim and witnesses, forensics, and video evidence. And he said it can be a "tremendous hurdle" to prosecute cases when victims can't remember what happened.

Between Lodges doesn't have any major plans for the future, she's just focused on living "happily ever after" with her daughters and brother.

"I'm handling it, I'm just moving on forward with my life," she said. "I'm glad to be here with my kids, not drinking, staying sober."

Between Lodges — who divides her life into the "old Sheena" who drank and the sober "new Sheena" — said she didn't need to go through any treatment program to quit drinking, all she needed was to think about her children's future. And she's also cut ties with bad influences in her life and found that being sober makes her happier.

Instead of picking up a bottle to deal with stress, she now listens to music, goes on a drive, calls family members and leans on LeBeau for support.

"She's my rock and she keeps me in line," Between Lodges said.

Between Lodges says she also thinks about all the friends, family and community members who supported her. Julian Bear Runner, president of the Oglala Sioux Tribe, wrote about her assault on his Facebook page while OST Victim Services held prayer circles and walks for her. She's now begun helping other domestic abuse survivors and wants to encourage victims to speak up.

"Girls out there in abusive relationships, they shouldn't be afraid to tell somebody," she said.

Between Lodges said some people tell her she should be afraid to live on the reservation where her alleged attackers — whom she has protective orders against through OST courts — also live.

"I just live my life daily," she said. "I grew up there and they're definitely not going to scare me out of there."

Sheena Between Lodges demonstrates how she can't see her hand after brain damage and surgeries left her without peripheral vision in her left eye.

Sheena Between Lodges speaks about her recovery and path forward with her tracheotomy scar clearly visible on her throat.

Sheena Between Lodges clasps her hands together while speaking about her recovery.

Sheena Between Lodges talks about having a portion of her skull removed to help her brain heal.

Sheena Between Lodges is pictured in a coma at the hospital. Part of her head was shaved so doctors could remove part of her skull to help reduce brain swelling.