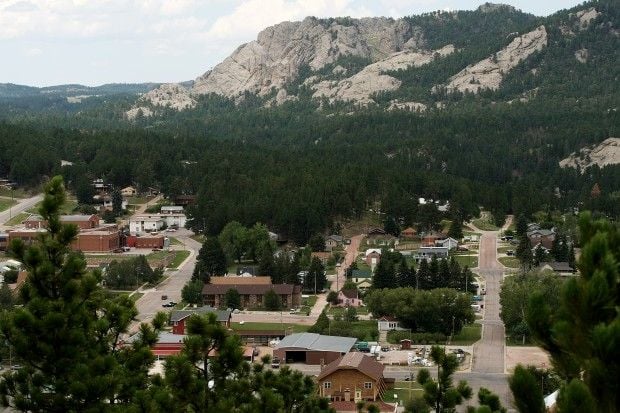 The city of Custer, shown here from Big Rock Park, will soon be home to a new $18 million hospital based on a public-private funding partnership.

The city of Custer and Regional Health are planning to build a new $18 million hospital east of the current hospital.

A new $18.43 million hospital will not only expand health care options for residents and visitors in Custer, but also boost the economic health of the city and the southern Black Hills.

The new 42,000-square-foot hospital will be built through a private-public funding partnership between the city of Custer and Regional Health of Rapid City and will replace the city's aging existing hospital.

“It’s going to be big deal, not just for Custer but for the whole Southern Hills,” he said.

Custer Community Health Services, Inc. now owns the hospital and clinic at 1039 Montgomery St. that is housed in a building dating back to 1962 and leased by Rapid City-based Regional Health.

Carson said the hospital board and the city have been looking at options for revamping or expanding the clinic for several years. Attempts to renovate the current facility spanning more than a decade fell short, leading CCHSI and Regional to begin talking about a possible merger about five years ago.

The negotiations led the city to shift from operating the hospital and clinic, with the CCHSI board overseeing operations.

The city decided to "move to what essentially everybody does, which is look to the private sector to provide that service,” Carson said.

The merger agreement, announced at a Custer City Council meeting last week, means Regional Health will own and operate Custer Regional Hospital and finance all but $4 million of the projected $18.43 million cost of the proposed new 42,000-square-foot facility.

The city will chip in revenues from a city sales tax, capped at a maximum contribution of $375,000 per year, to pay for its portion of the hospital construction, Carson said.

Custer Community Health Services will continue to provide an advisory board once Regional Health takes ownership of the new hospital, to be built just to the east of the current hospital on the south side of Montgomery Street.

The new hospital will provide emergency services as well as hospital and clinic care.

“We are seeing growth in clinic services and we’ll have new physicians joining us in the fall,” said Veronica Schmidt, president of Custer Regional Hospital. “Our current clinic setting will not accommodate growth.”

The new building will feature the same number of beds —11— as the current hospital, but most of the new beds will be in private rooms, not doubled up as they are now, said Regional Health President Kyle Richards.

“We have outstanding providers in Custer and this will give them and our caregivers a better place to practice medicine for our patients and families. It’s just going to be a state-of-the-art facility that we can do a lot of things, from specialties to looking at the future growth of Custer,” Richards said.

Once the new building is completed, the old building will be torn down and the roughly 3-acre site will be returned to green space and deeded back to the city, Schmidt said.

Richards said Regional Health is excited to bolster health care for Custer and the Southern Hills with a new facility.

“This is a culmination of a great partnership between ourselves, the Custer Community Health Services, Inc. board and ... the city of Custer,” Richards said.

The city of Custer, shown here from Big Rock Park, will soon be home to a new $18 million hospital based on a public-private funding partnership.

The city of Custer and Regional Health are planning to build a new $18 million hospital east of the current hospital.