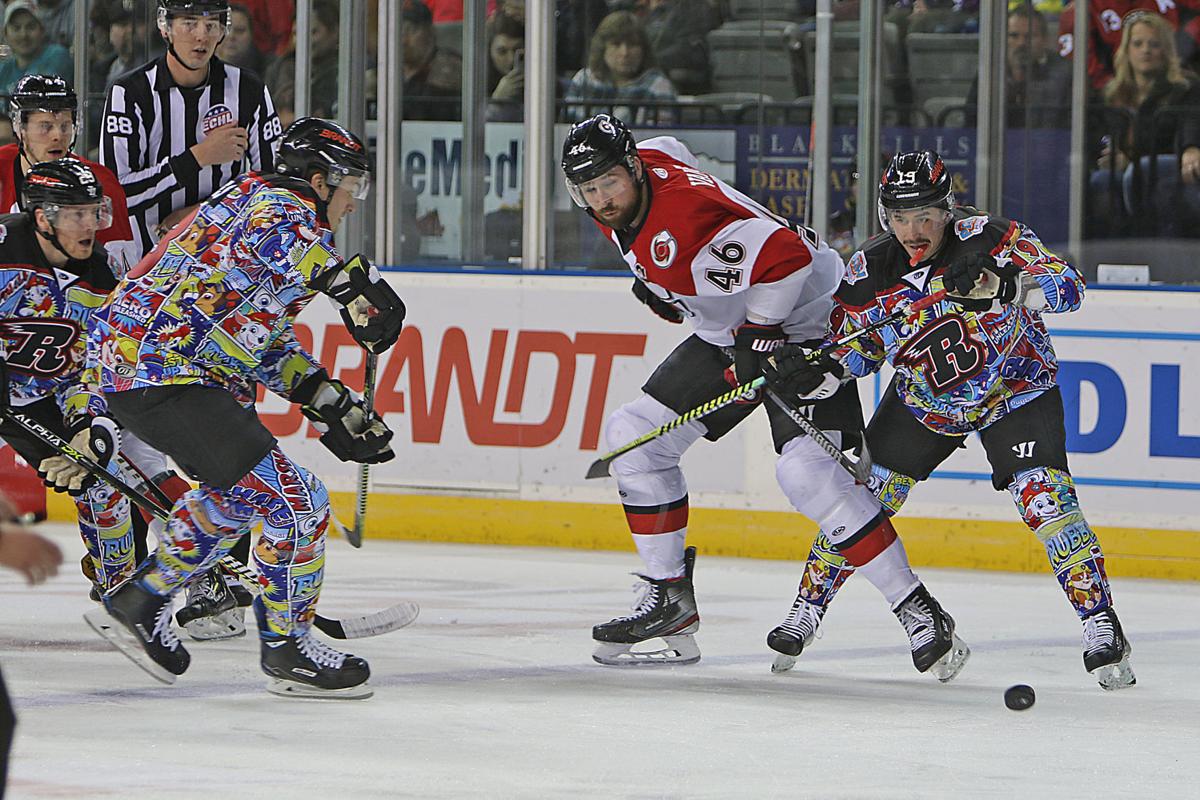 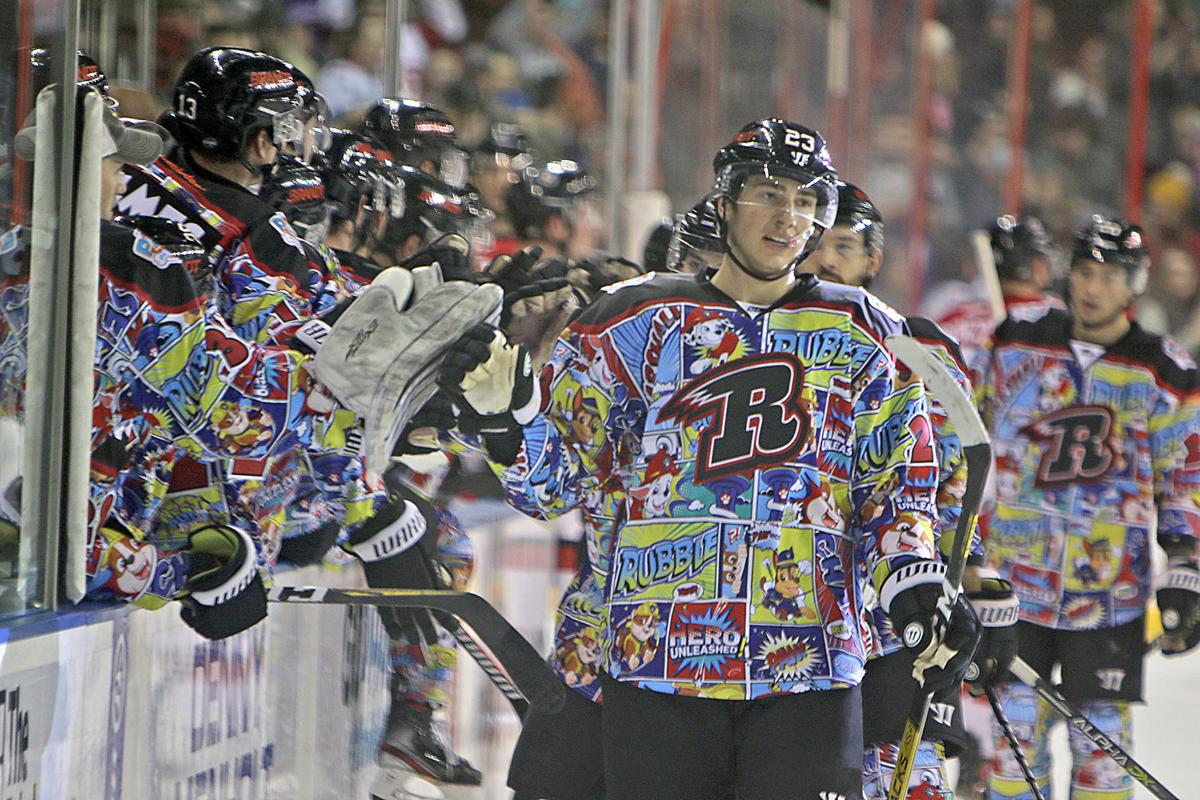 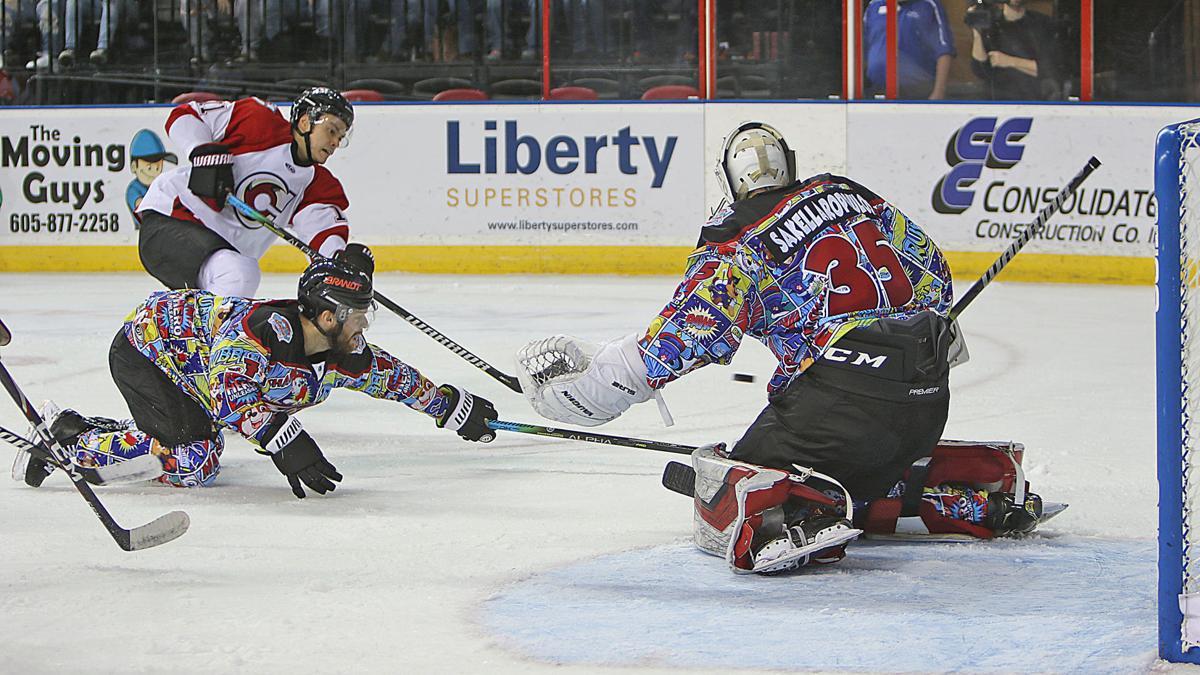 Cincinnati Cyclones forward John Edwardh rifles a shot past the blocker of Rapid City goalie Alex Sakellaropoulos (35) as Rush defenseman Charles-David Beaudion (7) tries to get his stick on the puck against Cincinnati Saturday at the Rushmore Plaza Ice Arena. 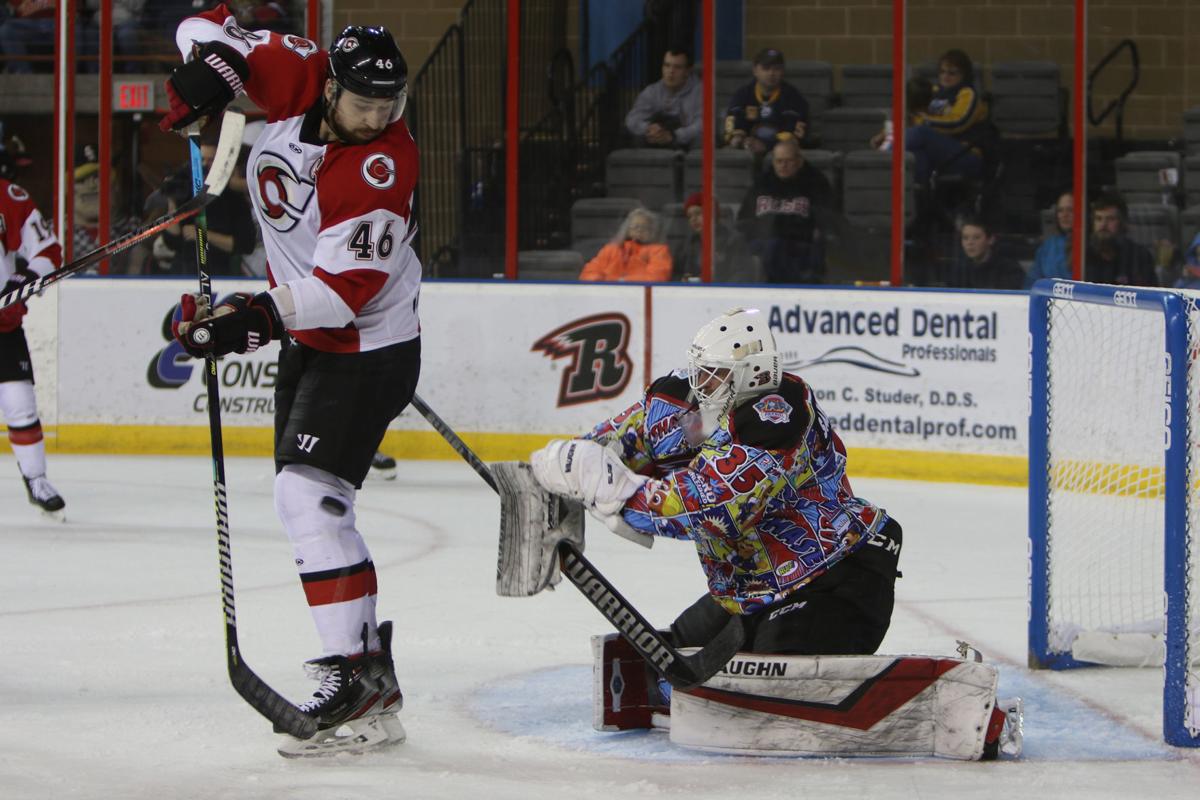 Rapid City Rush goalie Alex Sakellaropoulos (35) gets ready to make a save as a shot on goal whistles past the knee of Cincinnati Cyclones forward Justin Vaive (46) Saturday at the Rushmore Plaza Ice Arena.

Twice this season the Rapid City Rush have rebounded from an opening-game loss to win a three-game series by capturing the final two games.

It was not to be on Saturday night as the Rush fell to the Central Division leading Cincinnati Cyclones 6-2 on their home ice.

And possibly an even bigger loss resulted as well as captain Peter Quenneville went down in the second period by a shot Brennan Saulnier that struck Quenneville in the face before deflecting into the net. Quenneville did not return.

Needless to say, Quenneville's absence from the Rush lineup would be a huge loss in both leadership and offensive firepower.

“Fortunately, I understand nothing is broken, but we won’t yet know the seriousness of the injury,” Rush coach Danny Tetrault said. “I feel bad for Peter with all he’s done to have that happen in a manner like that.”

Cincinnati, a big, physical team, used the body to dominate puck possession in the offensive zone, and to negate Rapid City’s speed and keep the Rush consistently struggling to setup in the Cyclone zone.

A couple of early penalties kept the Rush on their own zone for much of the first period and the Cyclones began to take control of the game late in the period resulting in a Nate Mitton lamp lighter with 7:43 remaining.

And after the Rush drew even (6:24), on a Matteo Gennaro goal slapper from the left face-off circle that deflected off a defender’s stick over the head of Cyclone goalie Michael Houser, Cincinnati added two more tallies later in the period.

Both goals came on rebounds, a Justin Vaive conversion in the low slot. And to add insult to injury, Cincinnati’s John Edwardh tapping in a loose puck in the crease an instant before the horn sounded ending the period.

“That was a tough one right at the buzzer there,” Tetrault stated. “We were scrambling there and it was one of those games where all of the bounces went Cincinnati’s way, but they deserved those bounces because they outworked us in the first period and really set the tone.”

After Cincinnati stretched the lead to 4-1 midway through the second period with a Justin Vaive’s second goal of the night at the 12:31 mark of the second period, Quenneville’s very painfully mannered goal, his 20th of the season — assists to Saulnier and Eric Israel — and fifth of the series following a four-goal outburst on Friday night, narrowed the deficit to 4-2 through two periods.

Though a Rush power play early in the third (17:39) gave their faithful a speck of hope to narrow the deficit, the power play that has been dormant for the past month came up empty.

Cincinnati dominated the remainder of the period adding two more goals in the remaining moments.

“They definitely brought their speed and A game tonight,” Tetrault said. “They wanted revenge, and we had to kill three penalties right off the get-go in the first period, and that killed our momentum. And we didn’t have energy tonight like Cincinnati did. You have to give them credit. They dominated us from start to finish.”

The Rush (20-14-3-0) close out the current home stand next Wednesday night hosting the Wichita Thunder before hitting the road next weekend for games against Indy Fuel on Friday night and a rematch against Cincinnati on Saturday and Sunday nights.

Man detained in relation to his brother's killing near Porcupine

A man was detained early Wednesday morning in relation to the homicide of his brother near Porcupine, according to a news release from the Ogl…

With 11 of 15 elementary schools in Rapid City at or above capacity, larger classes are causing some classrooms to be overcrowded.

Cincinnati Cyclones forward John Edwardh rifles a shot past the blocker of Rapid City goalie Alex Sakellaropoulos (35) as Rush defenseman Charles-David Beaudion (7) tries to get his stick on the puck against Cincinnati Saturday at the Rushmore Plaza Ice Arena.

Rapid City Rush goalie Alex Sakellaropoulos (35) gets ready to make a save as a shot on goal whistles past the knee of Cincinnati Cyclones forward Justin Vaive (46) Saturday at the Rushmore Plaza Ice Arena.