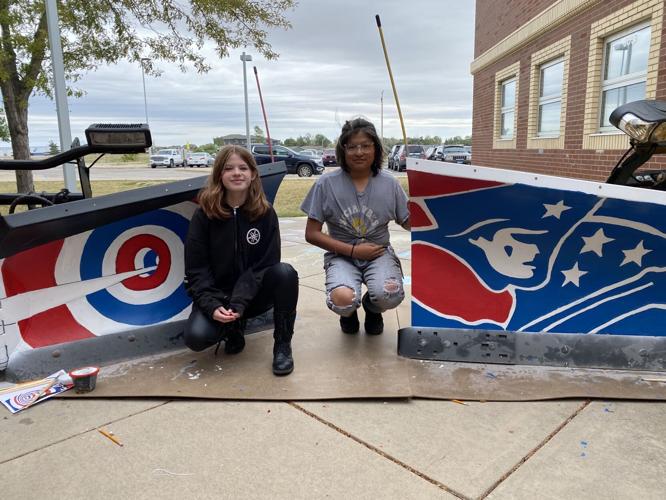 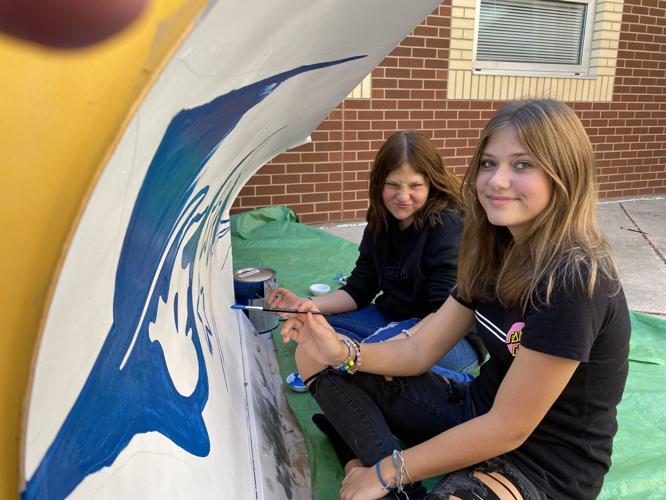 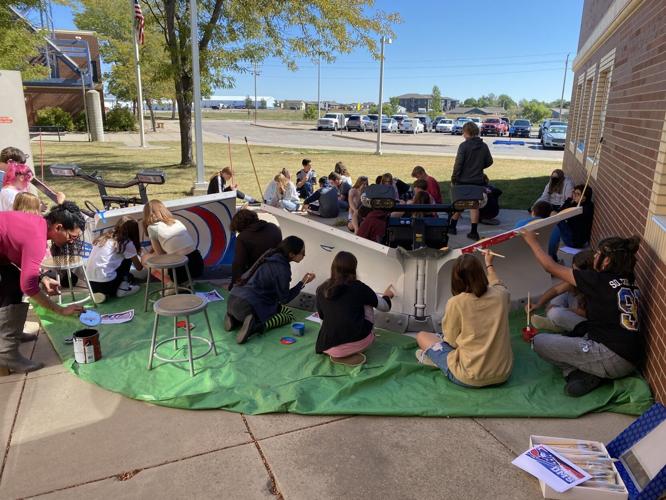 Douglas Middle School students join in painting student-designed art onto Box Elder city plows as part of the district's first-ever "Paint the Plow" project, in partnership with the city of Box Elder. 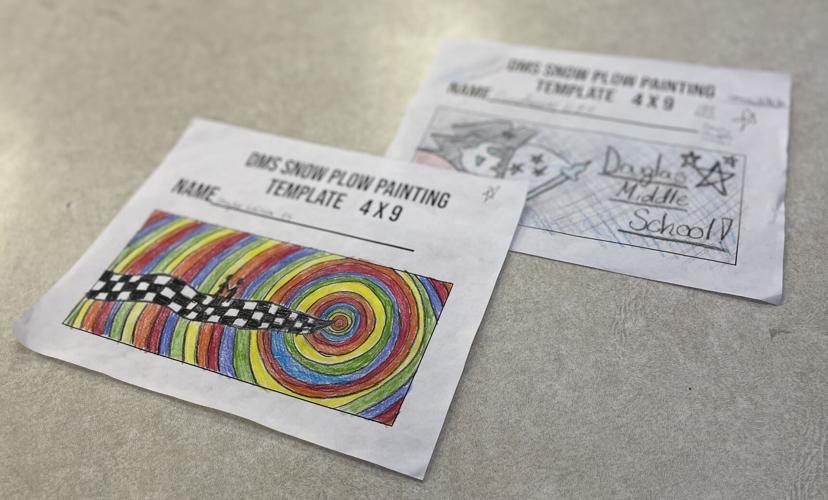 A partnership between the Douglas School District and the city of Box Elder has provided students the opportunity to take their art outside the classroom.

“Paint the Plow” made its debut with the Douglas School District this fall, allowing art students from both the middle school and high school to see their own original designs displayed across Box Elder city plows.

The project came together in about two weeks, with students painting their designs onto the plows in only four days.

Palmer had experience with a similar project in a previous school district, and saw it as a good opportunity to get the kids involved with the community.

For Douglas, it began with a graded assignment. Art students received a blank template the shape of the plows, and free rein to envision their designs devouring snow on the streets of Box Elder.

They were given little direction, Palmer said, other than to keep in mind their designs would be painted across the city’s plows. Palmer and one other art teacher each chose their favorites from their two classes.

For the middle school designs, those favorites came from eighth-grade students ShayLee LaCroix and Demetrius Waters.

For LaCroix, the contest ignited an interest in art she’d never really explored. Art held no sway outside of class for her. She said she was confused when she found out her design was chosen.

Necessity proved the mother of her invention, turning in her design at the last minute. The recognition, however, may have inspired her to tap into her art more in the future, she said.

Waters already had an artistic streak, enjoying drawing on his own time — mostly nature, he said. His design, inspired by the district’s mascot, gave him a platform to display his artistic talent in a way he never had before. He said this project was the first time he’d ever been chosen for anything on this level.

Once the designs were chosen, other students joined in painting the actual plows, completing the task in just four days — just in time for their grand entrance at last Friday's homecoming parade.

“They spent their lunches coming over here,” Palmer said of the students’ efforts to get the plows painted. “They took a lot of pride and put a lot of work into it.”

The city of Box Elder’s role in the partnership was an opportunity to “foster interaction with our residents to educate the community on the different equipment and services related to their municipality,” said Matthew Connor, public information officer for the city.

“Reviewing the equipment and painting the plows provides students with an enjoyable and tangible experience to understand what it takes to maintain city roads and keep the snow cleared,” he said.

LaCroix called the idea of seeing her own design driving around the streets of Box Elder “exciting.” She said she’ll try to stay up on snowy nights during winter break to catch a glimpse of her artwork.

“The reason I do this is to get the kids involved in something real,” Palmer said. “And it also gives them this huge audience that otherwise they wouldn’t have access to.”

The city provided the school district with painting supplies and the plows, giving the students an opportunity to “showcase their artistic talent,” Connor said.

This year was the first for the city and school district’s “Paint the Plow” project, but both expressed a desire to continue.

“We plan on making it an annual outreach event and hope to see it expand from year to year,” Connor said.

Once the snow begins to fall, Box Elder residents can keep an eye for the Douglas colors adorning their city plows. The designs, however, are more than colorful additions to city equipment, or even school pride — they’re about inspiring confidence and self-esteem in the students, Palmer said.

“Because they really do a great job,” he said.

A proposed transitional youth housing project in North Rapid City has stirred up concern about neighborhood safety, but the owners of the proj…

Douglas Middle School students join in painting student-designed art onto Box Elder city plows as part of the district's first-ever "Paint the Plow" project, in partnership with the city of Box Elder.