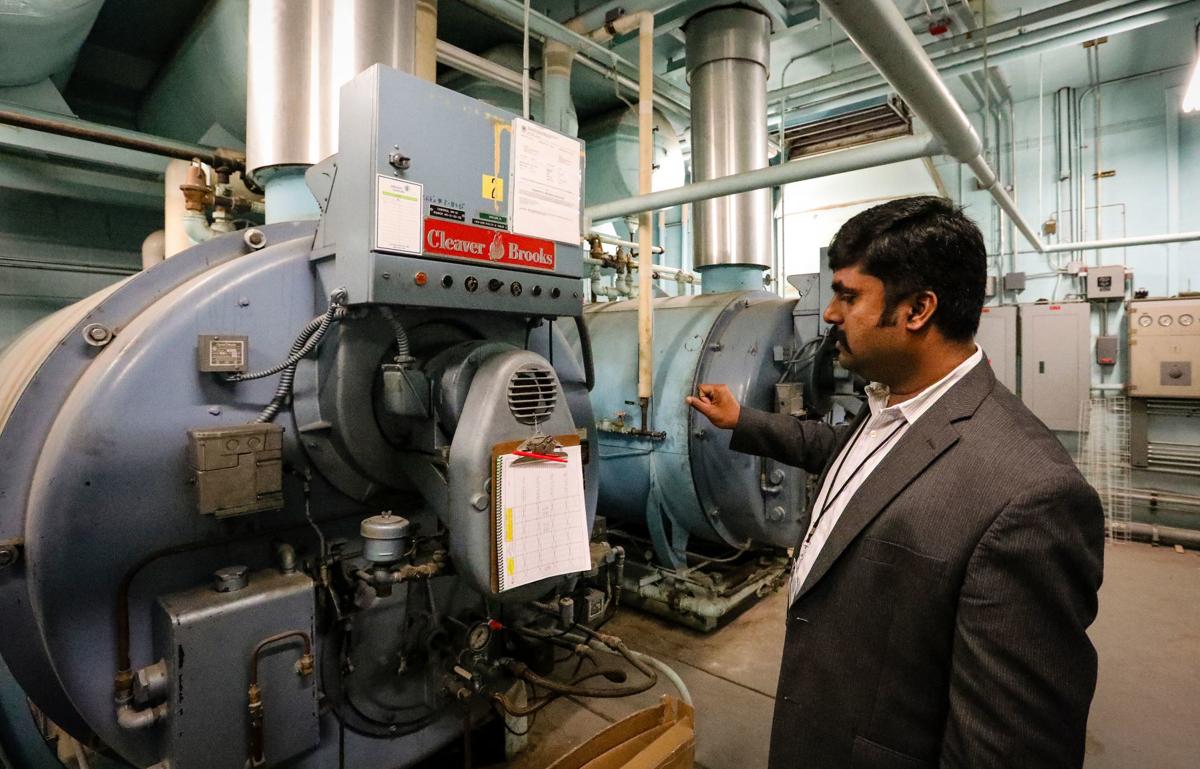 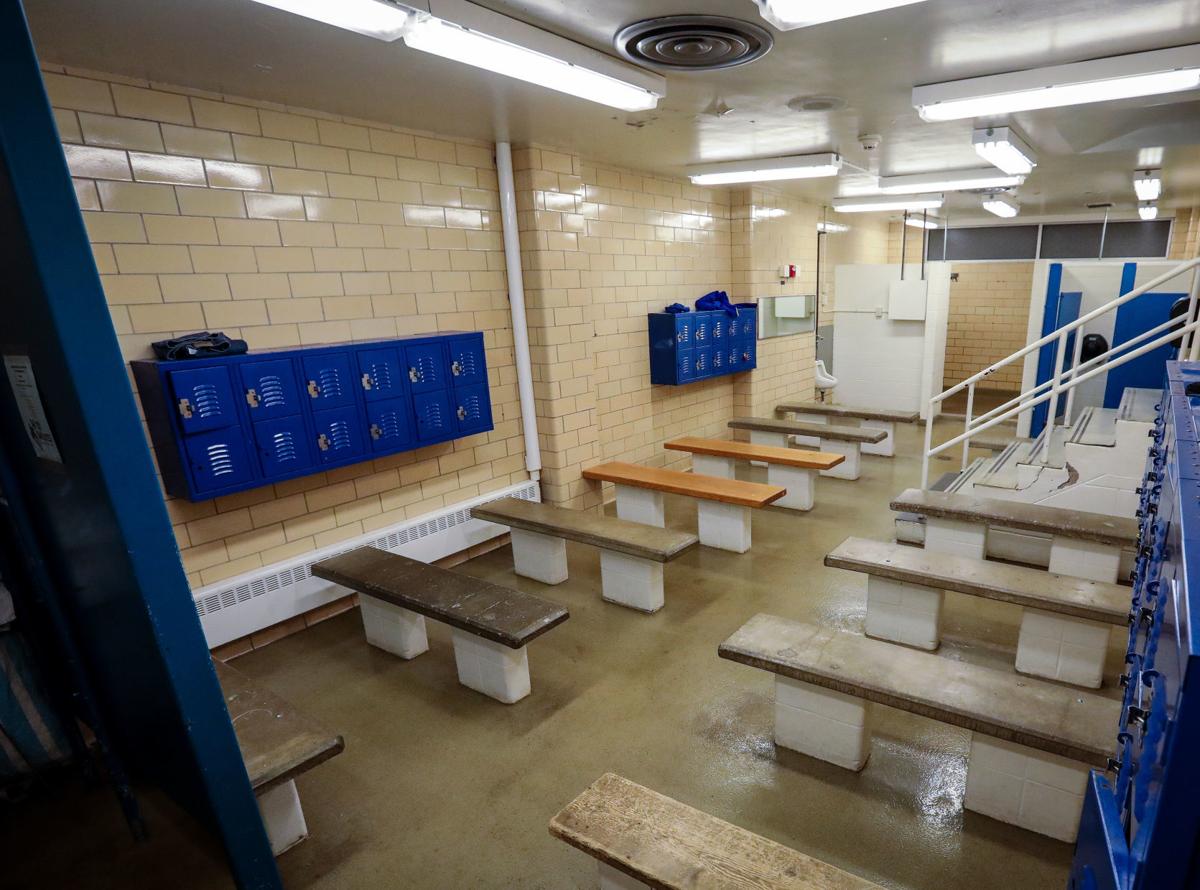 The West Middle school boys' locker room is prone to flooding, according to school district officials. 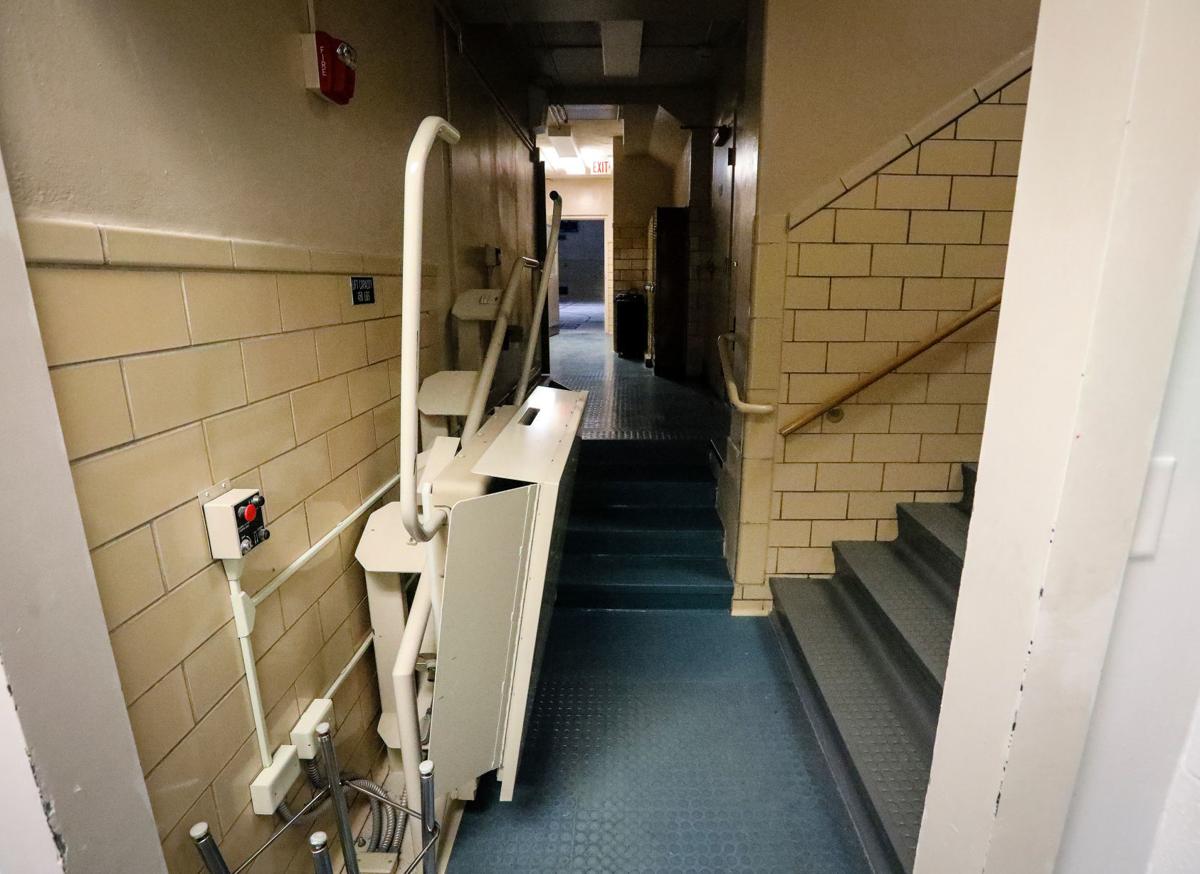 The ADA lift out of the West Middle School gymnasium almost blocks the hallway. 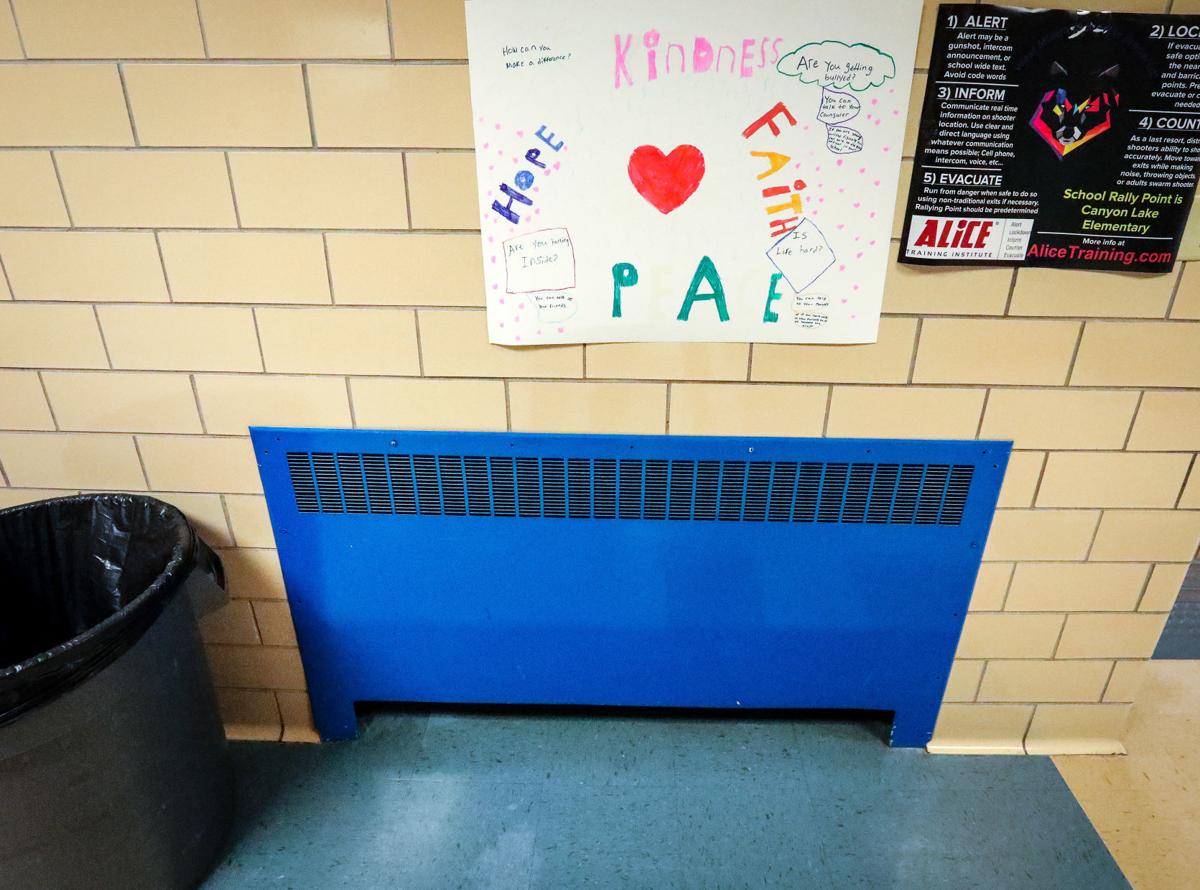 The heating units at West Middle School are all imbedded into the brick and concrete, which makes maintenance expensive and troublesome, according to school officials. 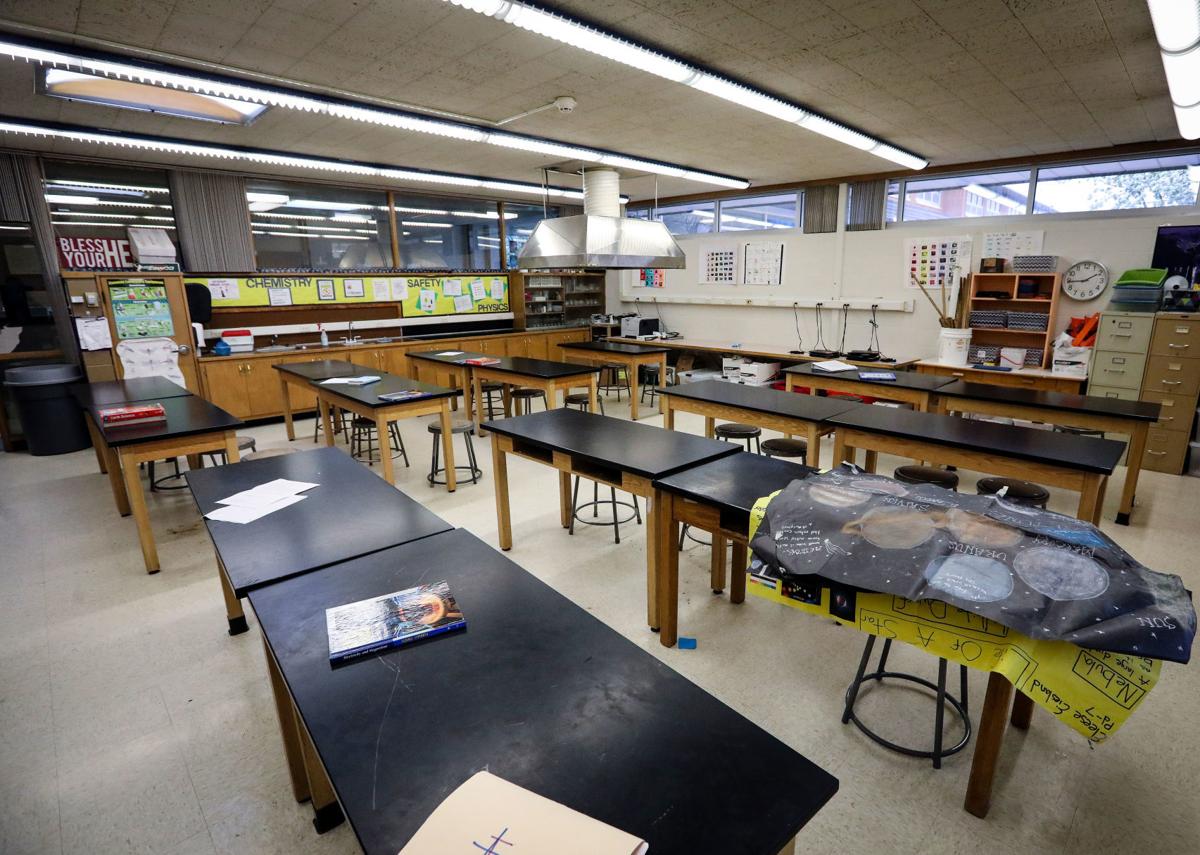 A science room at West Middle School with a single vent hood in the room. 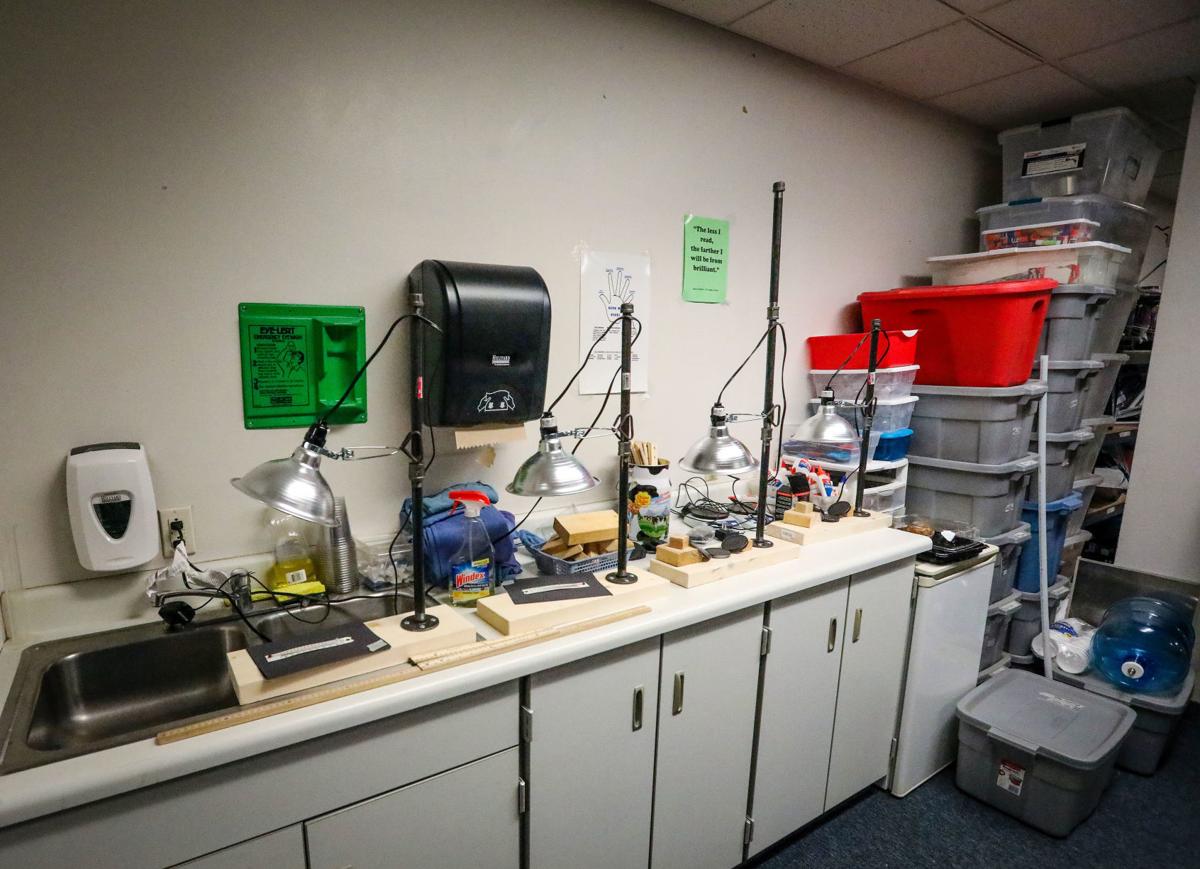 A West Middle School science classroom with such little storage that the teacher has resorted to plastic tubs to store materials.

Editor's note: This is the fifth story in a five-part series looking at the schools that are proposed to be closed under Rapid City Area Schools' $250 million facilities proposal.

When it first opened as a junior high in 1955, West Middle School was attended regularly by an estimated 335 students.

That figure rose sharply in the ensuing decades, with overcrowding concerns arising a mere 20 years later. According to the Rapid City Area Schools, 670 students attended the school this year. It has capacity for 664.

Standing behind the reception window at West earlier this month, Sheryl Dietrich, a member of the office staff, said that enrollment is the biggest difference she sees between the time she spent at the school as a student and today. Physically, she said it is much the same as she remembers it.

“I went to school here and nothing has changed. I graduated in 1975," Dietrich said.

Complaints that faculty, staff and administrators have about West Middle School are not unlike those they have for other buildings: it's old, it's crowded and its classrooms are too small to offer the kind of experience the district wants for its students.

So at some point over the next three to six years, the district wants to rebuild it from the ground up at an estimated cost of $45 million. The project is one of several major proposals that comprise the first phase of a master plan for school facilities.

Phase one of the plan, which includes the construction of three new elementary schools and the closure of three others, would be financed by a $250 million bond issue that would result in a property tax increase. The school-civilian task force that helped craft the plan is expected to deliver its final recommendations to the school board in June.

If those recommendations are approved, the bond issue will be put to a referendum vote that requires 60 percent approval to pass.

Accordingly, he said, support staff at West do not need as much space to do their jobs as those in grade schools do. And while students and specialists may not work from the hallways, as those elsewhere in the district have been forced to do, classrooms at West are still visibly crowded in both the main building and its four annexes.

Like other schools in the district, there are structural concerns in the building due to its age.

During heavy rainfall, it isn't uncommon for water to leak into the building. Principal Dan Conrad said the lone boys locker room, wherein a door leads directly to the outside, is prone to flooding.

Settling, however, is not as big of an issue at West as in other schools.

“We are on better soils in this part of the town. We are almost on rock,” Veluswamy said.

Some inefficiencies are said to be too expensive to address when compared to the cost of rebuilding. The old boilers that heat the school, for example, were said by Veluswamy to be nearly impossible to replace because the pipes they fed into are not compatible with newer machines.

The main office and entry way are also several classrooms away from each other, whereas newer schools often feature vestibules that staff can see directly into before buzzing in visitors. During a visit to West earlier this month, a thunderstorm resulted in a power failure that inhibited staff from buzzing in anyone remotely.

Because the school is poorly ventilated, machines and desks in its wood shop are visibly coated with a light layer of dust. Similarly, acrid odors linger in its chemistry labs even when labs are not in use.

Built more than 60 years ago, West's design also lacks requirements laid out in modern building codes. Its narrow entrance to the gymnasium presents some fire safety concerns, and wheelchair lifts are commonly used throughout the building where accessibility for disabled individuals is difficult.

On the whole, the private study of school facilities commissioned by the district in 2015 gave West's facilities the second lowest score of any other city middle school. Only South, whose facilities ranked worst in the entire district, placed below it.

It is estimated that it would cost $21.5 million to address all of West's most pressing structural problems. But officials have been quick to point out such fixes would do little to advance their initiative for what they call 21st century learning.

Speaking with the Rapid City Journal earlier this month, Veluswamy emphasized a point he has made repeatedly in recent weeks: The facilities plan on the table is not merely about mending old buildings but forging a better educational model for the students who will one day be running the world.

Conrad said that West makes the most of what it has to provide a good education, but students could begin exploring careers and passions that interest them at an earlier age if the school simply had more teaching space and more technology. Other administrators and teachers have said much the same thing about their respective schools.

"We have to give these kids those tools to be successful," he said.

As for what West would look like if it were to be rebuilt, Veluswamy said cues would likely be taken from East Middle School, built in 2012.

With a final report from the facilities task force just weeks away, school officials said last week that proposed tax increases necessitated by the bond issue may not be as high as previously projected. The initial levy proposed was for $2.37 for every $1,000 of a home's assessed value.

But last Thursday, officials said that an increase of $1 for every $1,000 may be sufficient.

School Business Manager David Janak and Tobin Morris, a district financial consultant from the Pierre-based firm Dougherty & Company, said last Thursday that growth they expect the schools to experience should provide enough money to offset the lower levy. But the lower tax hinges on an estimated annual growth of 5.4 percent, a figure that several school board members appeared hesitant to believe wholesale.

Janak and Morris said that there should be enough money in the school's general fund to pay back the obligation even if growth varies from that figure, and that capital outlay funds will be freed up after existing debts are paid off in about 10 years time.

But future schools will still have the ability to increase the tax as they set fit.

The West Middle school boys' locker room is prone to flooding, according to school district officials.

The ADA lift out of the West Middle School gymnasium almost blocks the hallway.

The heating units at West Middle School are all imbedded into the brick and concrete, which makes maintenance expensive and troublesome, according to school officials.

A science room at West Middle School with a single vent hood in the room.

A West Middle School science classroom with such little storage that the teacher has resorted to plastic tubs to store materials.