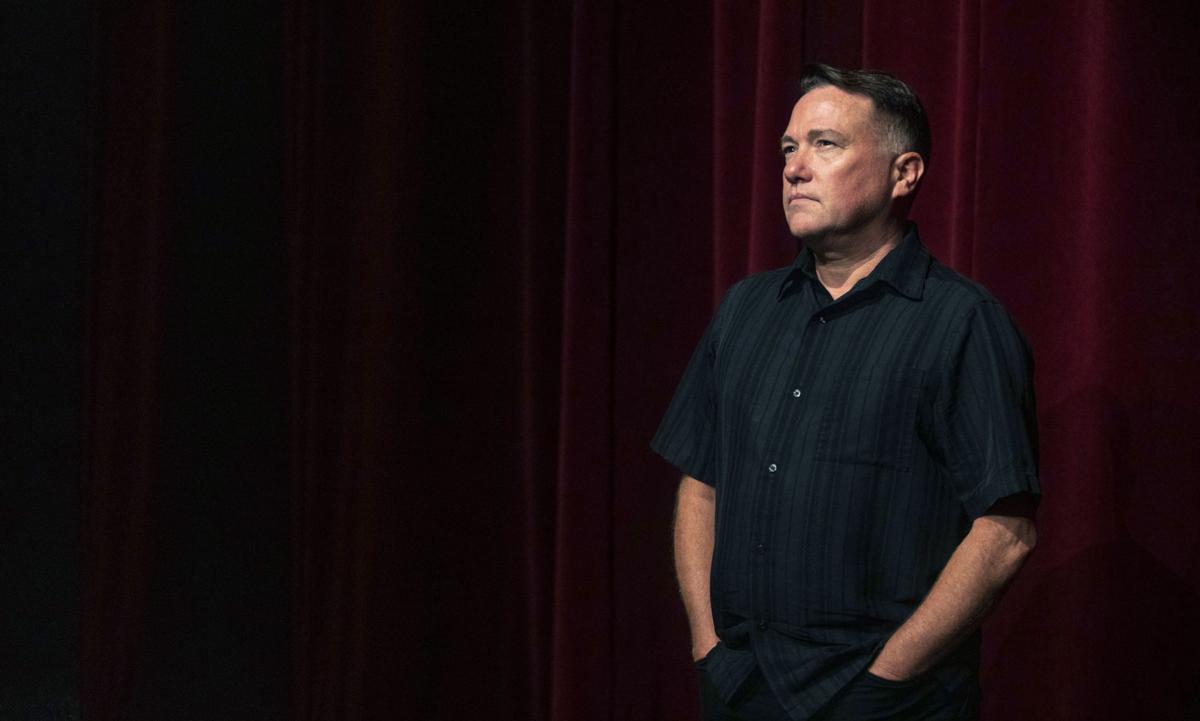 Theatre Department Director Justin Speck stands on stage at Central High School in Rapid City. Twenty years since the attack on the World Trade Center, Speck recounted his experience as an HR manager at H&M in downtown New York City on Sept. 11, 2001. 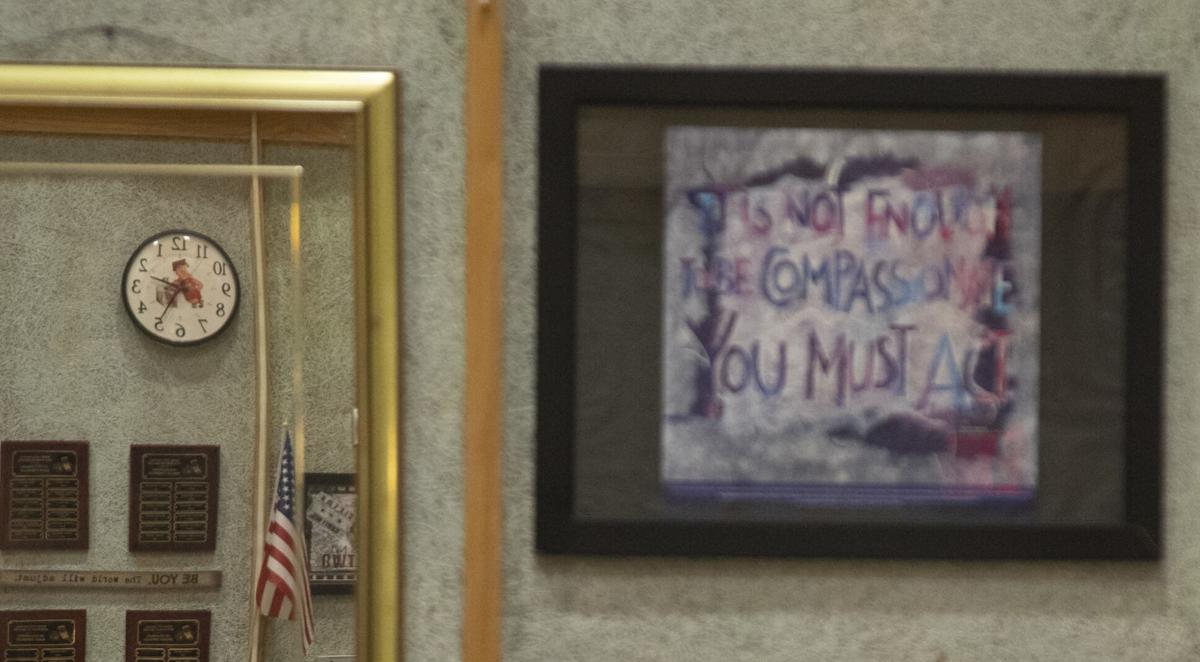 An American flag is reflected in a mirror during an advanced theater production class at Central High School. 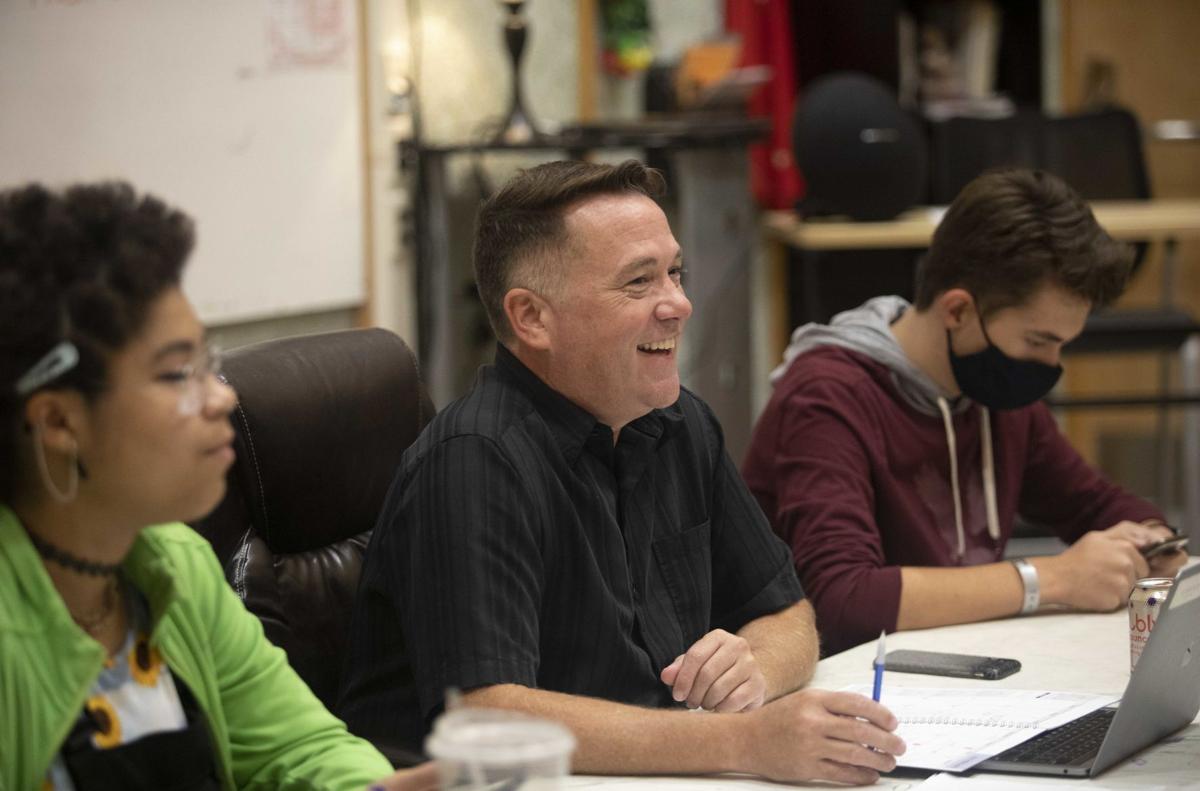 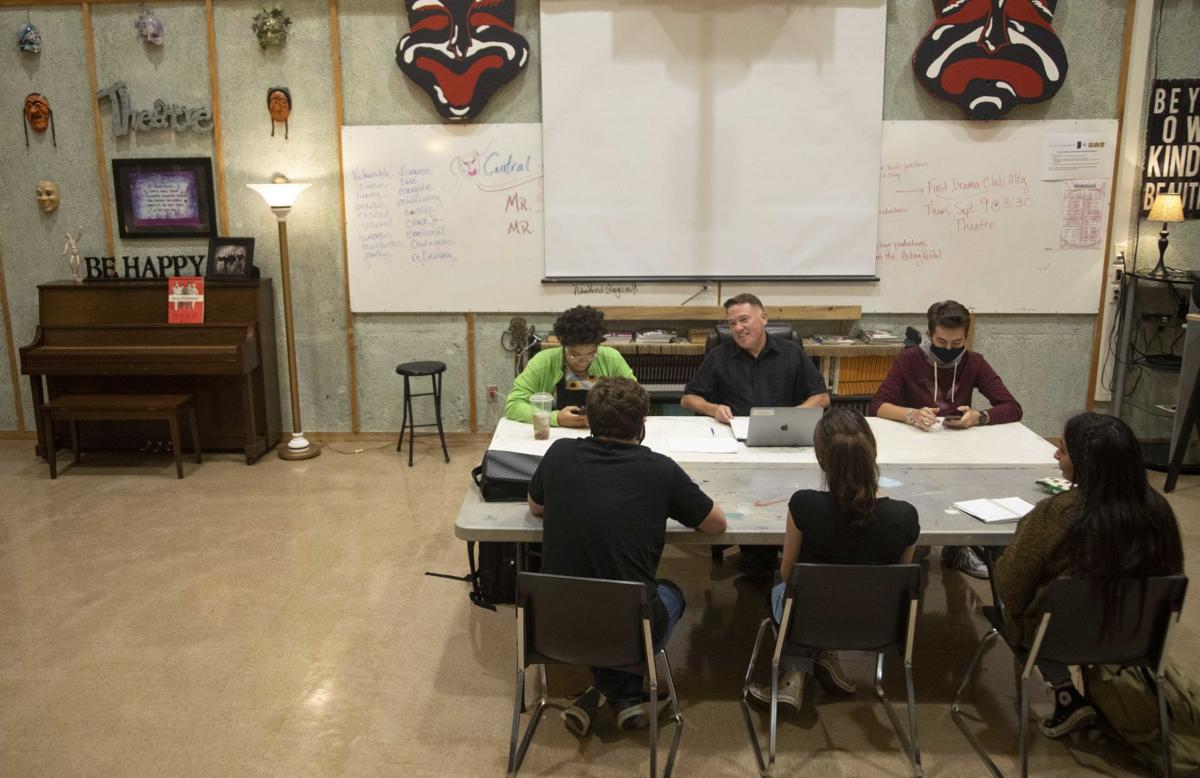 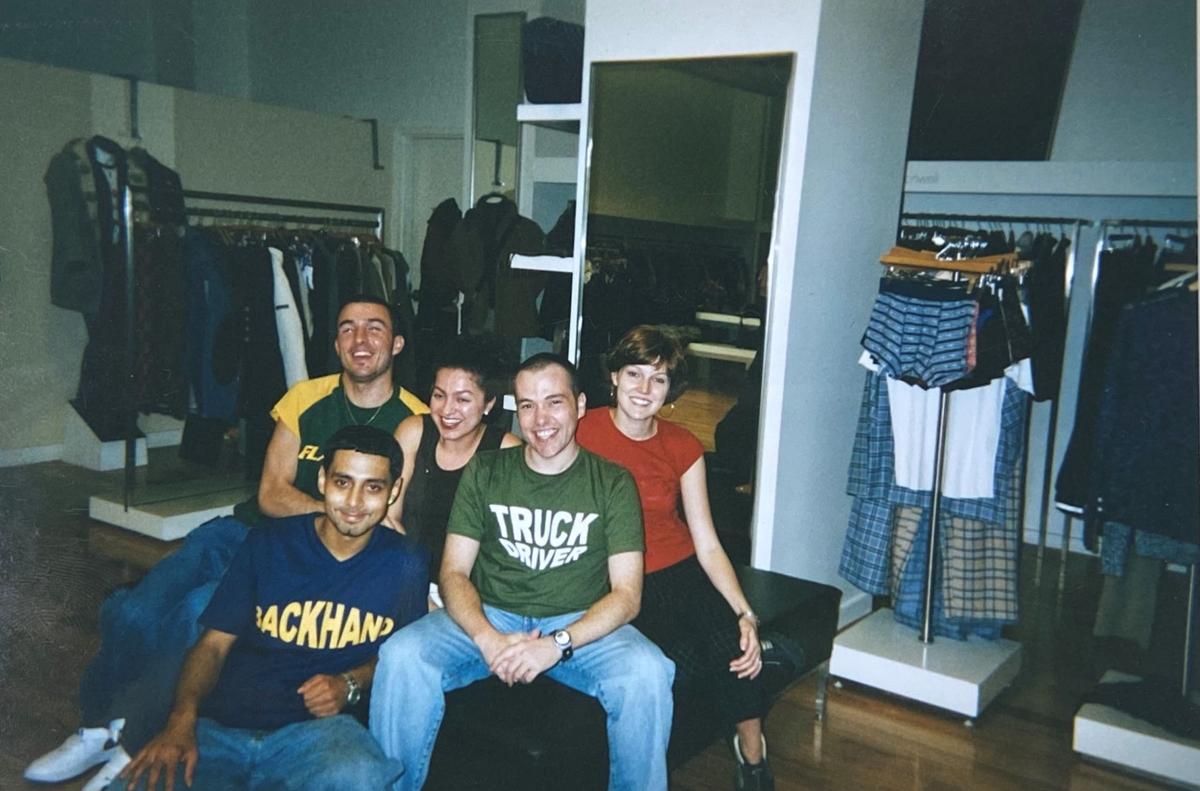 Justin Speck (in the Truck Drive shirt) and his friends and co-workers at H&M clothing in New York City more than 20 years ago. 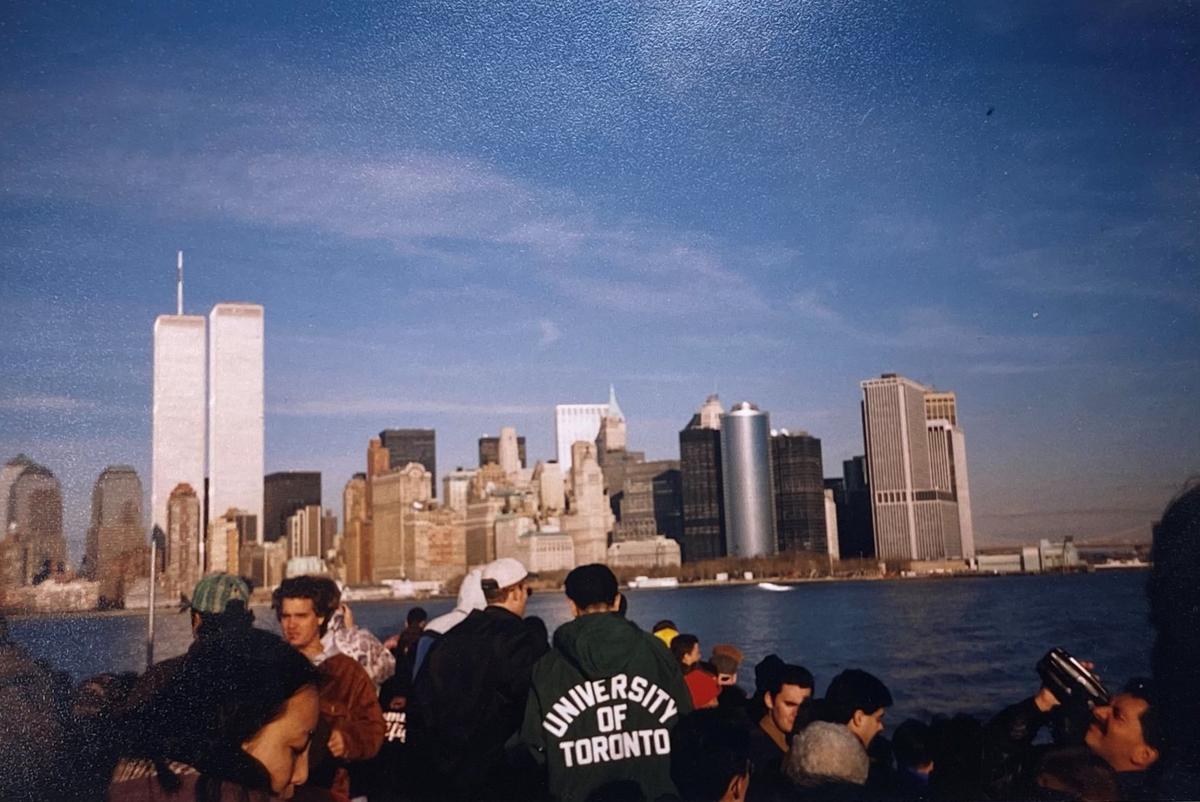 A group of tourists looks across the water to see the World Trade Center buildings. 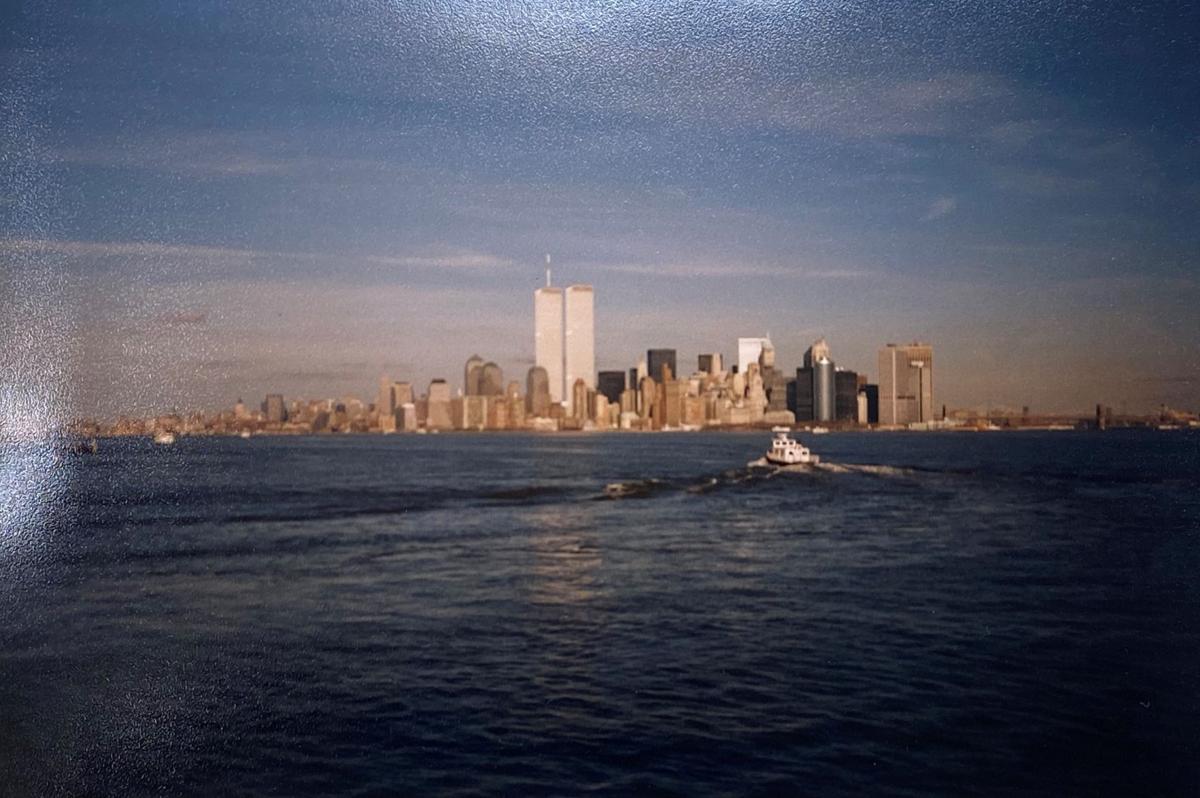 A tugboat heads to shore in front of the New York City skyline showing how the World Trade Center buildings towered over the rest of the city's buildings.

Justin Speck said the Rapid City Central Theatre Department saved him when he was a student. After following his dream to New York City only to become a witness to the worst terrorist attack on America, that same department still saves him every day.

"As a young adult, this place saved me," Speck said. "Not that I thought that I was ever going to do self-harm, but from a kid that loves music and theatre, I was always one of those creative types that loved living outside norms."

No matter what his situation was, the theatre department always gave him a safe space.

"I knew that this classroom, along with the two theatre educators that I worked with, I knew that I was going to be accepted for all the right reasons," he said. "I knew I had a creative outlet. I knew I could express myself with no doubt or fear. And so coming back and being an educator who can control the atmosphere in the classroom, I want it to be that safe space for any kid that comes into my class to be heard, to be listened to, and to be respected."

On September 11, 2001, Speck was not in a safe space. In fact, he was only a few miles from the World Trade Center. Speck arrived at his office a little early on a beautiful, sunny Tuesday morning.

"I woke up really refreshed. It was a beautiful day, not a cloud in the sky, was about 72 degrees there was no wind," Speck recalled. "And I thought, I'm just gonna go into work early. I'm going to take my time and grab a bagel and coffee from my favorite street cart vendor."

About 10 minutes after arriving at the H&M clothing retailers offices where he worked in human relations, a co-worker came into his office to say an airplane had hit one of the twin towers.

Speck immediately tried to make it make sense. He knew there was a lot of air traffic over Manhattan and he remembered when a small airplane had hit a skyscraper before, but none of that explained what he saw when he and some other co-workers made their way into Herald Square with a direct view of the World Trade Center.

They saw the smoke pouring out. The group watched some of the other events unfold on television before the first building fell and workers in Speck's office became part of the mass evacuation to get people away from the danger zone and into Central Park a safe distance away.

"I remember the looks on people's faces. We heard nothing but sirens," Speck said. "There weren't a lot of people screaming or yelling, but a lot of people trying to make contact with family and friends on their cell phones or payphones. There were no taxis running there were no buses running, it was just, thousands of people walking toward Central Park."

He spent the next few hours reconnecting with roommates and H&M employees to make sure everyone was safe. He was thankful that one of his roommates, who would have ridden the subway to the World Trade Center stop that morning, had moved out of state just two days prior to the attacks.

"So, we were watching, much like the rest of the world on television. Then we saw one of the towers fall," he said. "I just remember feeling completely numb, thinking not only was this surreal, but this couldn't be happening here in America in my lifetime. It took every ounce of educated brain cells to process what was happening."

When he was finally able to return to his home, he saw the damage for himself.

"And then finally, one of the trains heading to Queens was open from Grand Central Station. So we walked down to Grand Central Station, got on there and this was probably 8 p.m.," Speck said. "Once it crossed the East River, it comes out of the underground and above ground, and we looked in the direction where ground zero was. And it was just, it was like a war zone, I couldn't believe the smoke and the soot and the ash, and just the sheer devastation of what we were seeing as we were heading back to Queens on the train."

Even the safety of his apartment left him isolated because of the issues with communications in the city.

"We got back to the apartment and tried to send emails and, of course, our internet was still down, our phone lines weren't working," he said. "It took about 72 hours to finally reach somebody back in South Dakota, who could reach out to my family and friends to let them know that I was OK."

The sights, sounds, smells and events of that day left Speck with post-traumatic stress disorder and a strong desire to return to South Dakota.

Speck came home for Christmas only a few months later. During that visit, friends hosted a party. He was surprised to find out that the reason for the party was to present him with a check to cover the cost of him producing an album of music he wrote. "A Cowboy in Gotham City" is the album that came from that gift and his experiences in New York City.

Speck knew Rapid City was home. He was in plays at Central High as a child under the direction of Dale Green. He was taught in high school by Carol Saunders who had studied at Central under Green. When she resigned just before school began in 2002, Speck got a call to take her spot by Rapid City Councilor Pat Jones who was the principal at Central High School at the time.

"The rest is history," Speck laughed. With his 17 years in the role, there have been only three theatre department directors in 50 years at the school.

During Speck's tenure, his department has won top honors in state competitions every year. That generational continuity is part of the reason for that success and also a motivator to continue it.

But more than anything, Central's Theatre Department is a daily therapy for Speck as he deals with lingering effects of PTSD from that fateful day.

"I just have to remember every day why I do this. The students," Speck said. He said when he first took the job at Central, the memories of the attacks were fresh on students' minds.

"Now, none of them were born when it happened," he laughed.

Speck left Rapid City to chase his dreams in New York City and returned after a terrorist attack turned that dream into a nightmare. He still carries the weight of the events of that day, but every day that he teaches students and helps them work through their own issues, he heals a little more.

"They may not have been in New York City during 9/11. But so many of our students are coming to us with backpacks filled with trauma and remorse and abuse and anxiety, stress, all of that stuff," he said. "And part of my job as an educator, I feel, is helping them unpack those things that are weighing them down. So by allowing me to talk about my past experience with 9/11, opens their eyes to saying 'hey, he's human. I'm human too. Here are some things that we can talk about.'"

Theatre Department Director Justin Speck stands on stage at Central High School in Rapid City. Twenty years since the attack on the World Trade Center, Speck recounted his experience as an HR manager at H&M in downtown New York City on Sept. 11, 2001.

An American flag is reflected in a mirror during an advanced theater production class at Central High School.

Justin Speck (in the Truck Drive shirt) and his friends and co-workers at H&M clothing in New York City more than 20 years ago.

A group of tourists looks across the water to see the World Trade Center buildings.

A tugboat heads to shore in front of the New York City skyline showing how the World Trade Center buildings towered over the rest of the city's buildings.