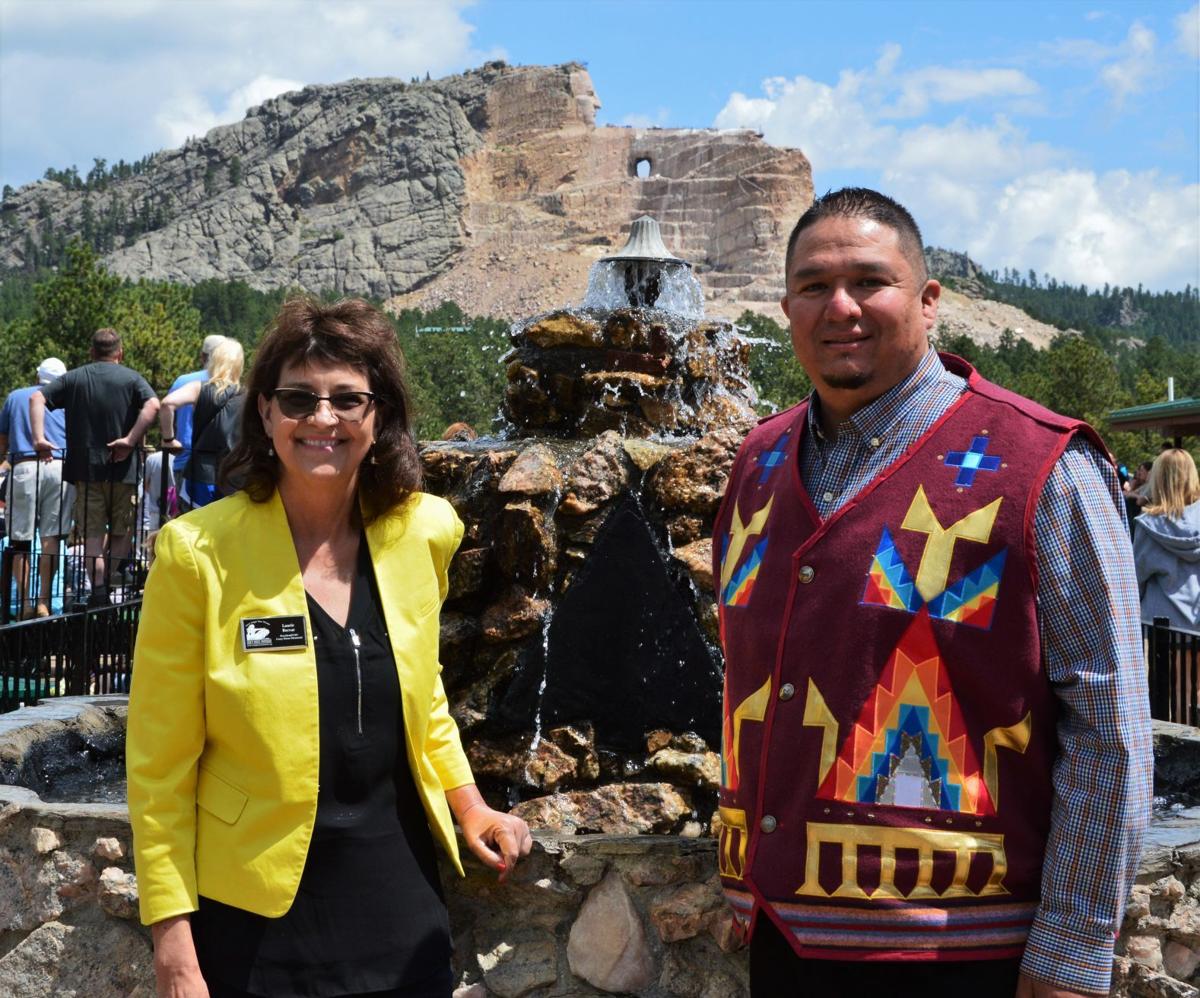 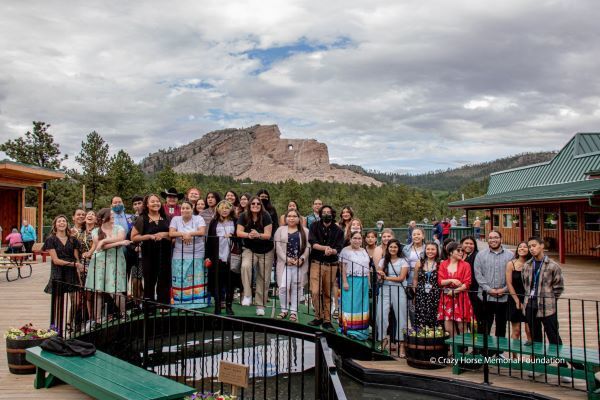 Students from the 7th Gen Summer Program at Crazy Horse Memorial pose in front of the monument.

The Indian University of North America, located at Crazy Horse Memorial near Custer, is hoping to make the transition for Indigenous students preparing to go off to college more successful.

Whitney Rencountre, associate director of enrollment management, said the program aims to prepare students to enter the world of higher education armed with the tools to allow them to be successful.

“We bring [students] here to earn 12 college credits before their freshman year, and then develop a cohort of students that are future young Indigenous leaders and give them the tools to succeed and coach them, even after they complete college, staying in contact and supporting them. And I think that’s really been the big success for our program,” Rencountre told the Journal Thursday.

Closing that gap by teaching students about time management, financial literacy, work habits and life coaching is one of the program’s main goals.

Rencountre said the program is working. Eighty percent of former students that responded to a survey about the program are either in college or have graduated from college.

Once those students begin at their home institution, their professors say they are “amazingly” prepared and have the skills to succeed, such as good time management, study and work habits, Rencountre said.

“Whatever their dream is, we’re trying to help them attain it. It lifts them out of poverty, literally. Education continues to be the great equalizer,” Crazy Horse Memorial Foundation President/COO Laurie Becvar said.

“Traditionally, [Indigenous] family circles were so close. And even still to this day, a lot of our family circles are so close that when somebody leaves, they encounter challenges of being on their own," he said. "One of the successes of the program is our leadership is all Indigenous, and most of us are first generation college students as well.

"So, we help students prepare for the culture shock that they face when they go to college and give them the tools to be able to advocate for themselves and get through the challenging times of being lonesome and away from their family."

Doris Tinsley, the program’s manager of student success and a former student in the Wizipan fall program for upperclassmen, said the Indian University of North America was built for people like her.

Tinsley, who is originally from Long Island, graduated from Virginia Tech last year and came back to work at the university during her gap year before heading to law school.

“Being an Indigenous woman that was in a predominately white institution, going to a predominantly Native environment with all types of representation, students don’t have to go through that culture shock. It’s an Indigenous-led team, built for people like me,” Tinsley said. “The connections I made as a student, I learned about more opportunities for Native students, especially for people like me who want to pursue tribal law.”

The university program’s location at Crazy Horse Memorial calls back to the memorial’s beginnings, and to the Black Hills as a traditionally sacred site for the Lakota, Becvar said.

“I don’t think there’s anything like it in the world, because when you’re learning against the backdrop of the memorial and the story behind not only the Indigenous people but this memorial, I mean, what an inspirational story about never giving up, about having a dream and making your dream happen. That’s why we exist today,” she said.

Becvar said one of the ways the memorial gives back to Native communities is by educating Native youth. The program is not cost-prohibitive for students — tuition and fees, books, and the majority of food and lodging costs are paid by Crazy Horse Memorial.

Students only pay $850 for the eight-week experience, Becvar said. Students have the option to deduct the funds from their internship paychecks, as well as the opportunity to earn back 50% of their food and lodging expenses at the end of the summer.

The summer program is competitive, Becvar said. It accepts up to 32 people each year and usually receives around 75 applications.

For 2021, the program has students from 10 different states and 29 different tribal nations from around the country — from Alaska to Oklahoma to California.

Being around Indigenous students from other tribes helps students learn about other cultures, something they don’t typically get in a public school setting, Rencountre said.

The program’s courses are general first-semester classes, but Indigenous culture is deeply ingrained in all of the coursework. All of the professors are Indigenous, and students read Native literature, study Native art, and go on weekend field trips to sacred sites to learn the history of the land.

“We teach our students that no matter where they are, we need them to be represented, representing their families, their communities,” Rencountre said. “You can see a spark in their eye when they start to realize that they can continue to make their family proud even if they leave their community.”

Rencountre said the program is called 7th Gen because after the Native way of life was effectively destroyed by European colonization, Indigenous leaders prophesied that their people would begin to thrive again in seven generations.

“It was folks like Black Elk that prophesied because of this trauma… it’s going to take seven generations to start to get back to normal, so to speak," he said. "So, the seventh generation is happening now, where our students are the ones that are going to carry new traditions forward in terms of healing, harmony, growth and support."

Miguel Eagle, a student at Oglala Lakota College majoring in Lakota Studies with an emphasis in cultural tourism, is in the Indian University of North America’s upper-level student summer program, after participating in the first-year experience in 2019.

Eagle will be coming back to Crazy Horse in the fall for the Wizipan semester-long program in leadership and sustainability. He said the program is a really amazing experience and changed the trajectory of his college career.

“It was a huge helping hand in taking the stress off of me as a high school graduate going into college,” Eagle said.

The program also helped him figure out what he wants to do with his life after college, Eagle said. He plans to pursue a Masters in Education degree after he completes his undergraduate studies.

“I’m a caring person, I love to be a mentor and teach people. It surprised me this year that I have that in me,” Eagle said. “Being an upper-level student talking to first-years, I came to the realization that I love to help people like that. It amazes me — I didn’t think I’d be interested in that until I came here.”

One of his favorite aspects of the program is the Friday family nights, where students come together after work and class for a home-cooked meal prepared by different groups of classmates to relax and have fun. There is also a series of guest speakers who tell stories about the Indigenous history of the Black Hills and Great Plains.

Last Friday’s program was about the Battle of Greasy Grass, or Little Big Horn.

“A lot of us took a lot of information away from that. It’s empowering aside from just relaxing," Eagle said. "You get to hang out, learn about people’s backgrounds… it’s really a mutual exchange of empowerment from the students and guest speakers."

He said he tries to emphasize to people that the students are not pawns of the Crazy Horse Memorial, just being used for their labor as part of the internship. Eagle said students are learning how to be professional employees.

“I like to look at it at face value… and see how deeply rooted this [program] is in mutual support of Native culture and non-Native culture,” he said. “We’re not just here to make the memorial look good. We’re genuinely taking things back to our homes and communities and applying those [skills] in order to make our communities greater.”

The program is challenging, but Rencountre said most students make it through with the right support and find the experience rewarding.

Many students are not used to getting encouragement all the time from adults or having people believe in them, he said. The program becomes a positive place for those students to change the direction of their lives to the way they want it to go.

“I think it’s important to be able to navigate through the challenges, and staying encouraged through the tough times. I think students develop that while they’re here and even after [they leave],” Rencountre said.

To learn more about the program or to find information about applying, visit https://www.usd.edu/summer-school/crazy-horse.

John Hinckley to be released from oversight

Plant-based chIcken nuggets come to the US market

Plant-based chIcken nuggets come to the US market

Most substitute teachers and substitute support staff at Rapid City Area Schools will receive a pay raise beginning Oct. 1 after the Board of …

Concerned parents on both sides of the aisle turned out in droves for Tuesday night’s Rapid City Area Schools Board of Education meeting. Pare…

Pinedale Elementary School in Rapid City is one of four South Dakota schools being recognized as a 2021 National Blue Ribbon School by the U.S…

‘It’s all we have’: parents express concerns about proposed RCAS policy changes

At Tuesday's Board of Education meeting for Rapid City Area Schools, the Board plans to consider several new policies and adjust or delete wel…

At the Aug. 9 Rapid City Area Schools Board of Education meeting, the Board voted 5-2 not to apply for a $30,000 grant that would help immigra…

Justin Speck said the Rapid City Central Theatre Department saved him when he was a student. After following his dream to New York City only t…

Students from the 7th Gen Summer Program at Crazy Horse Memorial pose in front of the monument.