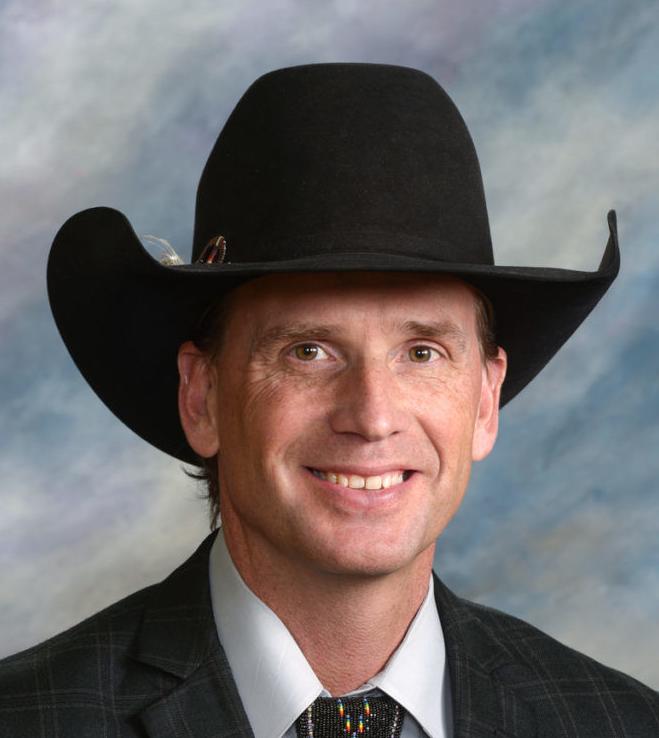 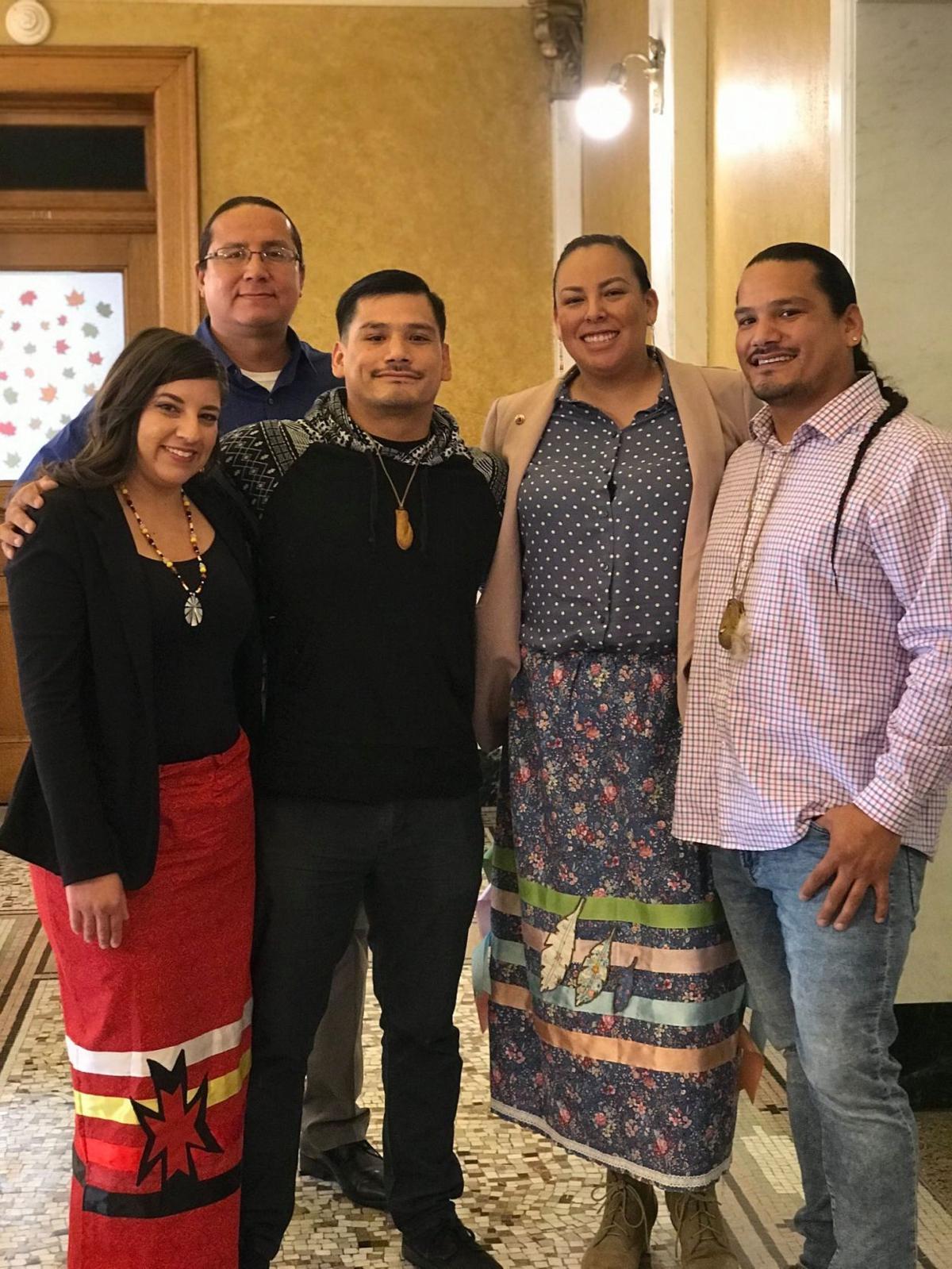 From left: Sarah Pierce, Sage Fast Dog, Kyal Middletent, Cante Heart and Kansas Middletent, all parents and members of the South Dakota Education Equity Coalition, pose at the state capitol in Pierre where they testified about creating charter schools based on Oceti Sakowin values in 2019. 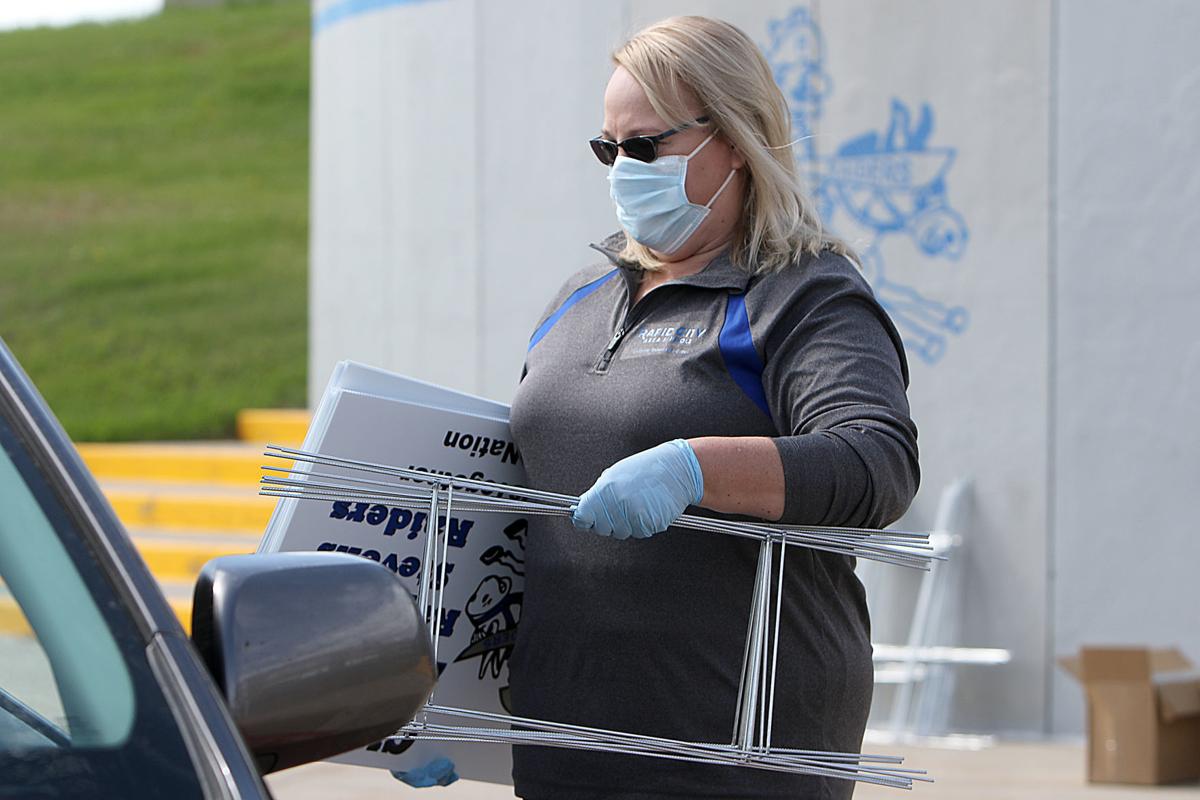 Dr. Lori Simon, Superintendent of the Rapid City Area Schools district, carries signs recognizing the graduating Class of 2020 to a car Wednesday at Stevens High School. Staff from from Rapid City’s public schools and RCAS district staff will be place the signs in the yards of the Class of 2020 from Stevens, Central and Rapid City high schools who were set to graduate Sunday before ceremonies were postponed due to the coronavirus pandemic.

The Senate Education committee could vote on SB 68, the Oceti Sakowin community-based schools bill, on Jan. 26 after proponents and opponents testified for more than an hour on the legislation Thursday morning.

Indigenous education equity advocates have proposed the bill again after it failed in the 2020 session. It aims to create public charter schools in Rapid City and the state based on the values of the Oceti Sakowin, Lakota, Dakota and Nakota people.

Sen. Troy Heinert, the Senate minority leader for the Democrats, said the bill has been 40 to 100 years in the making and that if Simon and other opponents said they could do something like this already, “then where have you been?”

“These people have asked for it, and it never happens,” Heinert, of Mission, said. “They say they can do this, but what makes us think that they’re going to? The only time we’ve had this conversation is because of this bill. They’ve more or less just refused.”

Public schools as they are now are “trying to take Native American kids and fit them in a system that we clearly can see doesn’t work for them,” Heinert said in his rebuttal toward the end of the meeting.

Ten proponents of the Oceti Sakowin schools bill spoke Thursday morning and said Indigenous students don’t have the cultural support they need in public schools to succeed and that the bill offers students and families more “school choice.”

Ross Garelick Bell of the South Dakota Education Equity Coalition (SDEEC) was the first to testify in favor of the bill Thursday morning and said he was also representing the Yankton and Crow Creek Sioux tribes.

Bell said each school would be sponsored by a nonprofit that takes an application to a local school board, which would approve or deny an application within a certain window of time.

From there, the school goes into a contracting phase, Bell said.

The district wouldn’t lose funding for any student who chooses to go to the Oceti Sakowin school “because the students are technically still part of the school district,” he said.

“The money follows the students proportionately as it does with any other school,” Bell said.

Sarah Pierce, lead facilitator of the SDEEC, testified that her two RCAS students left the district to learn remotely at Oglala Lakota County schools and that she knew of at least 130 other families in Rapid City who made the same choice during the pandemic.

“Parents like myself who reside in RCAS have limited opportunities and access for our children to access equitable Lakota language and cultural courses,” Pierce said. “Beyond COVID-19, what happens to those students who wish to access that equitable access to language and culture once schools resume in-person?”

Sage Fast Dog said “Lakota language is on a dangerous route to be extinct within 10 years,” a problem that may be solved by teaching entirely in Lakota.

Sen. Jim Bolin asked at the end of the meeting whether the schools would teach in the Lakota language at all times, including in English classes. Fast Dog argued that Lakota would be the best for students because they could become fluent within four years.

“If you know your language and know the instructional strategies to deliver a language, the kids are going to perform well, and be able to read and write,” Fast Dog said.

Kevin Killer, president of the Oglala Sioux Tribe, also testified in support of SB 68 and said it will help his nation and emphasized the importance of “school choice.”

Matt Kull, a representative from NACA Inspired Schools Network (NISN), also testified for the bill. NISN is a nonprofit that supports leaders in Indigenous communities to develop a network of schools similar to what SB 68 is pushing for, based on the Native American Community Academy charter schools in New Mexico.

Kull said “there’s a clear problem” with education using a metaphor he thought of as a volunteer firefighter: “It’s been a dry season, the prairie’s on fire, and the winds are blowing. That’s how urgent it is. Native students in South Dakota deserve something different now.”

Wizipan Little Elk said in Todd County for every 100 freshmen that enter high school, 10 years later he only sees five college graduates return from that group, so “we are literally creating more jobs than there are college graduates.”

“How in the world are we supposed to build our economy, generate revenue, create jobs and opportunity if our students aren’t prepared for the workforce or to go off to college and come back home?” Little Elk said.

Don Haggar, state director of Americans for Prosperity, said he believes every child should have access to education opportunities that allow them to fulfill their fullest potential, “and we think SB 68 does that.”

Sherry Johnson, tribal education director of the Lake Traverse Reservation in eastern South Dakota, said she would ask the education committee to support SB 68 because the “school choice” it provides “should not be a threat, it should be embraced.”

Helena Brings Plenty, a junior at Little Wound High School who lives in the RCAS district, said she excelled previously at an arts charter school when she lived in Portland, Oregon, with family.

“Public schools did not understand” her needs as an Indigenous student. She also testified that she lacked cultural support within predominantly white public schools in South Dakota and Oregon.

Eight opponents of the bill spoke Thursday morning and argued that the bill is unnecessary because educators could create a magnet school in school districts without legislation and that there are logistical challenges or holes in the proposed legislation.

Simon was the first of the bill’s opponents to testify. She began by saying that “we all share the common goal of wanting to achieve better outcomes for our Native American students.”

Simon said some of the “good progress” made in RCAS is that there was a “significant reduction” in the discipline and suspension of Native students “following an overhaul of our discipline matrix” and new training for teachers.

Once the opposition finished speaking, Heinert called out this portion of Simon’s comments and said “the first thing we heard in opponent testimony was about discipline. (Opponents) didn’t talk about relevance or a new way of learning.”

“While we have made progress, we know there’s a lot of work to do,” she added before proposing the alternative magnet school. She said her experience with magnet schools in Minnesota prepared her to potentially open such a school in Rapid City.

Coy Sasse, business director for the Rapid City school district, followed Simon’s testimony and said there is a “mountain of logistical information” in the bill that hasn’t been worked through yet.

Wade Pogany, executive director of the Associated School Boards of South Dakota, said none of the opponents are opposed to helping Native students, but shared concerns that the bill creates a separate school board governing the Oceti Sakowin school, which he said “is not local control” and the bill creates negative ramifications for school boards.

Diana Miller, a lobbyist for the large school group, said while this is “not an us versus you” situation and that every student means a great deal to every educator, the bill basically creates charter schools and is not the answer, she said.

Rob Monson, executive director of school administrators of South Dakota, said the educational experience that SB 68 is attempting to create “can already happen in South Dakota and is happening in South Dakota” in a Native American school — Oglala Lakota County schools — without new legislation.

Monson said several schools in Sioux Falls — New Tech High School, the Spanish immersion center at Sonia Sotomayor Elementary School, All City Elementary School — are functioning similarly to the proposed Oceti Sakowin schools and were created at the request of district patrons, designed by public committees and approved by the school board.

Sam Nelson, a registered lobbyist for the Sioux Falls School District, said he would point to Monson’s examples of Sioux Falls schools as a resource to people interested in creating Oceti Sakowin community-based schools.

Loren Paul, president of the South Dakota Education Association, said public schools can and should do better to meet the needs of Native American students but there’s a problem with education equity as a whole.

“Our main concern is the bill takes taxpayer dollars out of the hands of the elected board and turns them over to a private entity that is not accountable to the public,” Paul said. “A better approach would be to engage the community as a whole to establish a magnet school. SDEA believes such an approach will allow for the accountability of tax dollars and create a real community dialogue that can have a positive impact system-wide.”

Mitch Richter, representing the South Dakota United School Association, said after the defeat of the 2020 bill he expected the proponents and opponents would meet to work out the issues brought up during the 2020 session, but that didn’t happen.

Richter also argued that students in South Dakota already have “school choice” by way of open enrollment, and that “choice does not guarantee quality.”

From left: Sarah Pierce, Sage Fast Dog, Kyal Middletent, Cante Heart and Kansas Middletent, all parents and members of the South Dakota Education Equity Coalition, pose at the state capitol in Pierre where they testified about creating charter schools based on Oceti Sakowin values in 2019.

Dr. Lori Simon, Superintendent of the Rapid City Area Schools district, carries signs recognizing the graduating Class of 2020 to a car Wednesday at Stevens High School. Staff from from Rapid City’s public schools and RCAS district staff will be place the signs in the yards of the Class of 2020 from Stevens, Central and Rapid City high schools who were set to graduate Sunday before ceremonies were postponed due to the coronavirus pandemic.