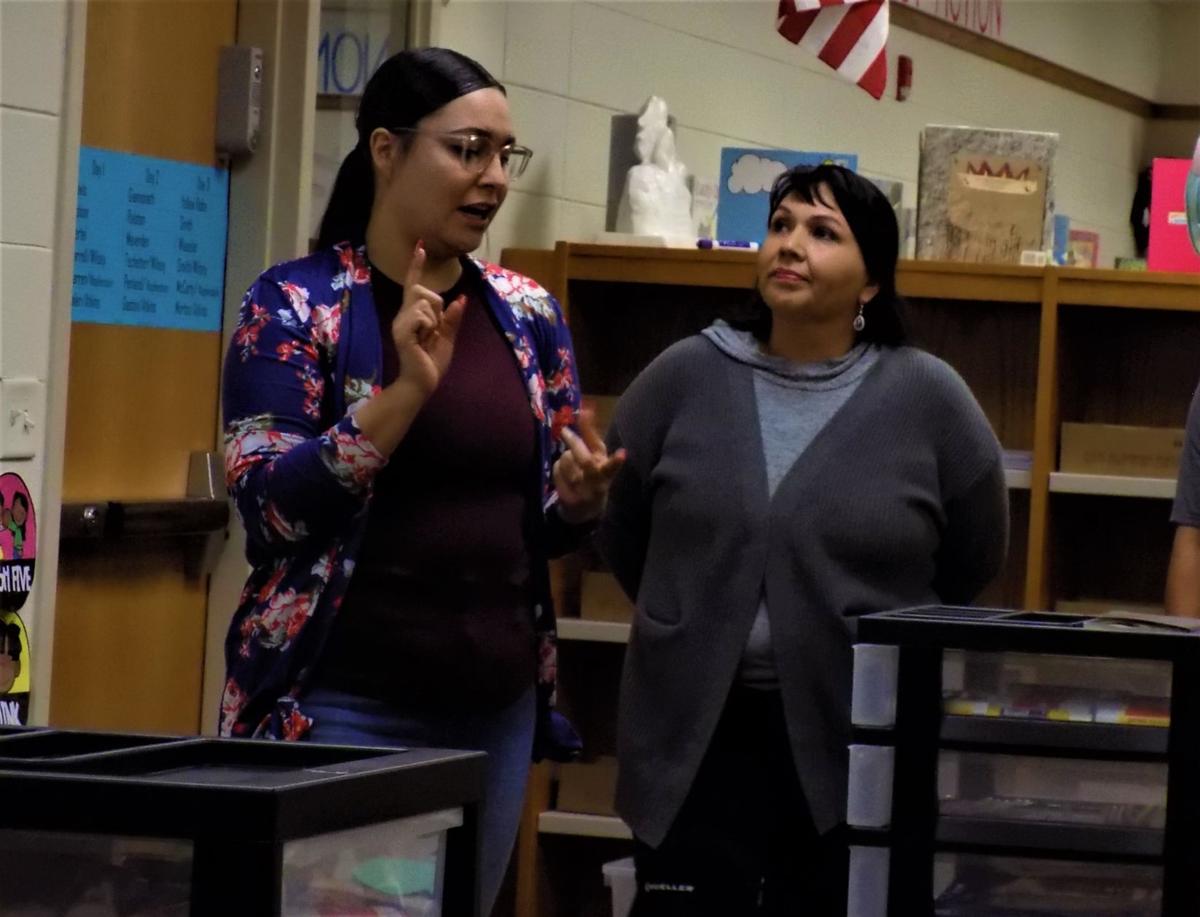 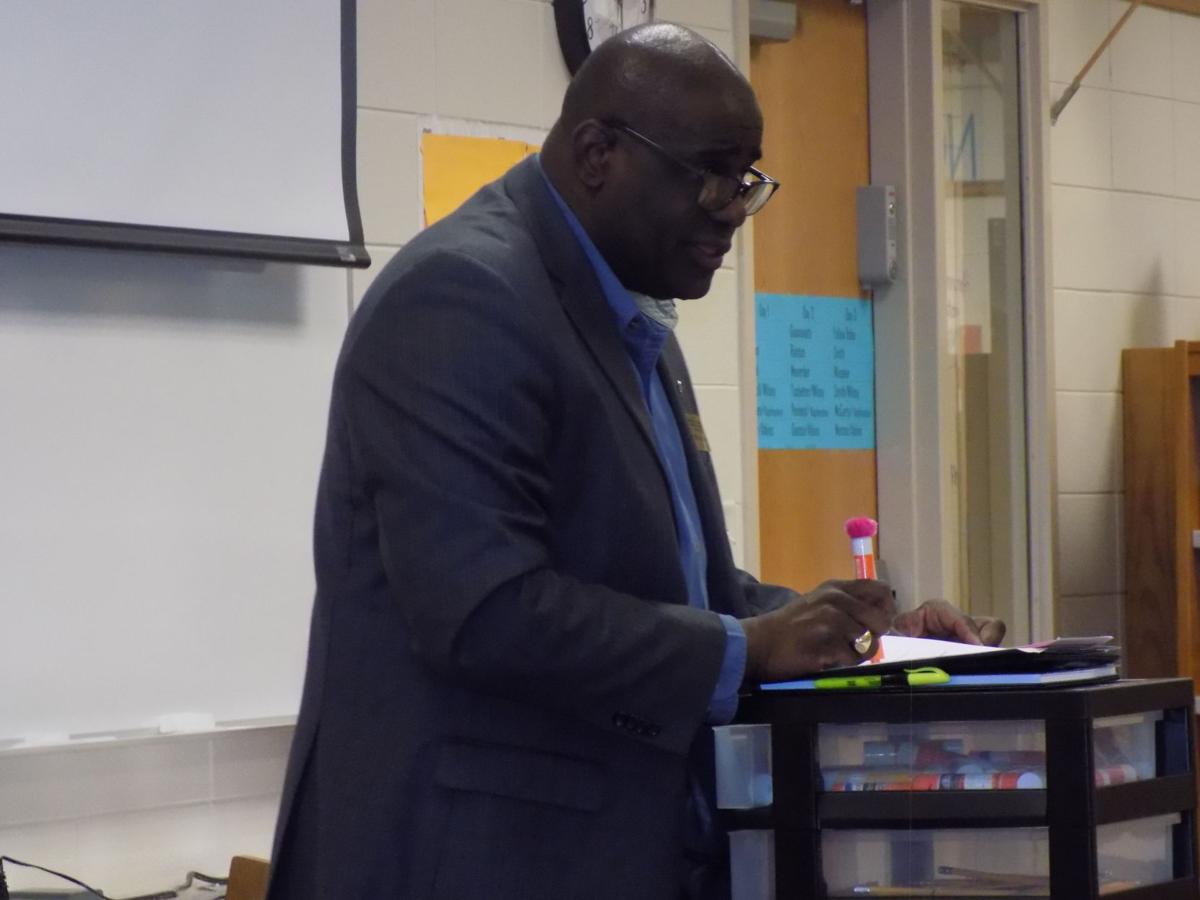 Peering into the educational experiences of Indigenous students, participants shared data and told stories that sometimes led to tears Wednesday evening in a community meeting at General Beadle Elementary School.

They also worked to develop suggestions to present to Rapid City Area Schools officials to address persistent disparities between the educational outcomes of Indigenous and non-Indigenous students.

The RCAS Indigenous Education Task Force facilitated the session in collaboration with the Rapid City Human Relations Commission, a public entity that works in partnership with the Mniluzahan Okolakiciyapi Ambassadors – often referred to as MOA.

The first part of the session was devoted to data revealing deep disparities between the performance of Native and non-Native students in the school district. Valeriah Big Eagle, one of the presenters, later singled out a fact she found particularly alarming.

“There was a 75% attrition rate of last year’s (Indigenous) graduates,” she said. “Why are we losing so many Indigenous children before they graduate?”

Big Eagle, the president of the Title VI Indian Education Parent Advisory Committee, said the attrition rate was determined by following students from the beginning of their freshman year to the end of their senior year. Out of about 350 Indigenous students who were freshmen at the beginning of the 2017-2018 school year, she said, fewer than 100 graduated.

Big Eagle and Amy Sazue, another of the presenters, noted that graduation rates increased dramatically when students participated in the Ateyapi Mentoring Program, an Indigenous mentoring program run by Rural America Initiatives. They noted the need for funding to bolster and continue the program.

Sazue is a parent on the Title VI Indian Education Parent Advisory Committee.

Much of Wednesday’s session involved the sharing of stories. Heather Thompson, the parent of a sixth-grade Lakota student in Rapid City Area Schools, questioned a conclusion about the role poverty plays for Indigenous students.

“I think there’s a misperception that poverty is the cause and sole root of the issues that we have with Native students in Rapid City,” she said.

To make her point effectively, she explained, she’d have to “toot my own horn” – at least in the beginning of her narrative.

“I went to Harvard Law School, and my son’s grandmother went to Yale Law School,” she said. “He has a very stable household, so poverty and instability are not issues.”

She said her son initially received glowing feedback, as a young student, from his teachers. But that later changed as he approached his middle school years. By last year, she said, he’d begun receiving comments about a lack of confidence and a lack of care in his work – the sorts of feedback he’d never received as a young child.

The situation at home, she said, had not changed. But exposure to bullying and other factors at school, she said, had gnawed away at her son’s self-confidence. And that loss of confidence, she noted, carried academic consequences.

Thompson said her son was home-schooled by a Native teacher last year when COVID-19 disrupted the school schedule. The affirmation of her son’s culture, she said, dramatically fortified his academic performance and other facets of his behavior.

Although she acknowledged that she was broaching a wide-sweeping issue with what she called a “case study,” she also underlined the urgency to examine the documented disparities between Indigenous and non-Indigenous students in whatever ways are at hand – through both stories and statistics.

“In the end,” she said, “this is about improving academic performance and graduation rates for our community as a whole so that we address the crime rates, so that we have a more educated workforce, and so that racial tensions will decrease.”

She paused and added, “What we have right now is totally unacceptable.”

During a break in the session, Thompson cited the immersion program at Red Cloud Indian School on the Pine Ridge Reservation as a strong model to help solve the problems she discussed.

Others at Wednesday’s meeting noted the need for Indigenous teachers in the district.

That's a need that Kristen Strissel, the director of human resources for RCAS, emphasized to the Journal earlier this year. In October, she described a Lakota Immersion Pilot program launched in the district this year that includes a full-immersion kindergarten class in Canyon Lake Elementary School, along with a cultural studies component. The class, open to students of all backgrounds, gives children a chance to speak and learn in Lakota.

The Indigenous Education Task Force sparked planning for the program in February, tapping input from Indigenous RCAS parents and students, along with Lakota leaders and elders, the Journal reported in August.

“It’s our hope that we can build on this program year after year,” Strissel told the Journal in October, stressing the need for more Native teachers throughout the district.

At Wednesday's community meeting, teachers, parents, and other community members brainstormed possible strategies and approaches to engage and affirm Native students. Deb Daly, a seventh-grade teacher at South Middle School – and someone who’s taught more than 30 years in the school district – noted the possibility of doing a “talking circle” with students.

And near the end of the session, Malcom Chapman, coordinator of the Rapid City Human Relations Commission, asked participants to write down “the single most important thing that we need to do next to wipe away these disparities.” He later collected the written suggestions from the participants after a public sharing.

One of the participants who spoke out was Omaka Mendoza, an Oglala and Sicangu Lakota seventh-grader who now attends EmpowerED in Rapid City. Mendoza talked about bullying during his comments to the whole group, and afterward he elaborated on what he believes helps a person who’s been bullied – particularly in a situation involving race.

“The teachers should give them comfort,” he said, and let them know “that what (the other student said) was not true, that it was racist, and that they shouldn’t feel bad because they have longer hair or darker skin.”

Mendoza stressed the effectiveness of that sort of precise language in reaching a student who’s been bullied because of race. He said dialogue between students is important, but he emphasized how it feels – as a student – to receive affirmation from a teacher.

“Your teacher is a guide,” he said. “Hearing that from a teacher would be more powerful than just from a student.”

Karen Mortimer, director of MOA and chair of the Human Relations Commission, closed the session with a call to non-Native community members.

For the 12th year in a row, student groups from South Dakota Mines will serve as volunteers on the annual Martin Luther King, Jr. holiday, col…

Before Starr Chief Eagle performed a hoop dance for students at Rapid City High School on Friday, she described the way her dancing draws from…

Center for American Indian Studies digs into documentary, other projects at BHSU

Urla Marcus has hoped for a long time to preserve the voices of area elders in a carefully crafted, artistic format. Now Marcus, director of t…

School board to consider new grading scale at Tuesday's meeting

The Rapid City Area Schools Board of Education is slated to vote Tuesday on moving to a 10-point grading scale beginning next school year. It'…

In the company of her grandparents, Sho-Shanna Piper discovered that history could be nourishing.