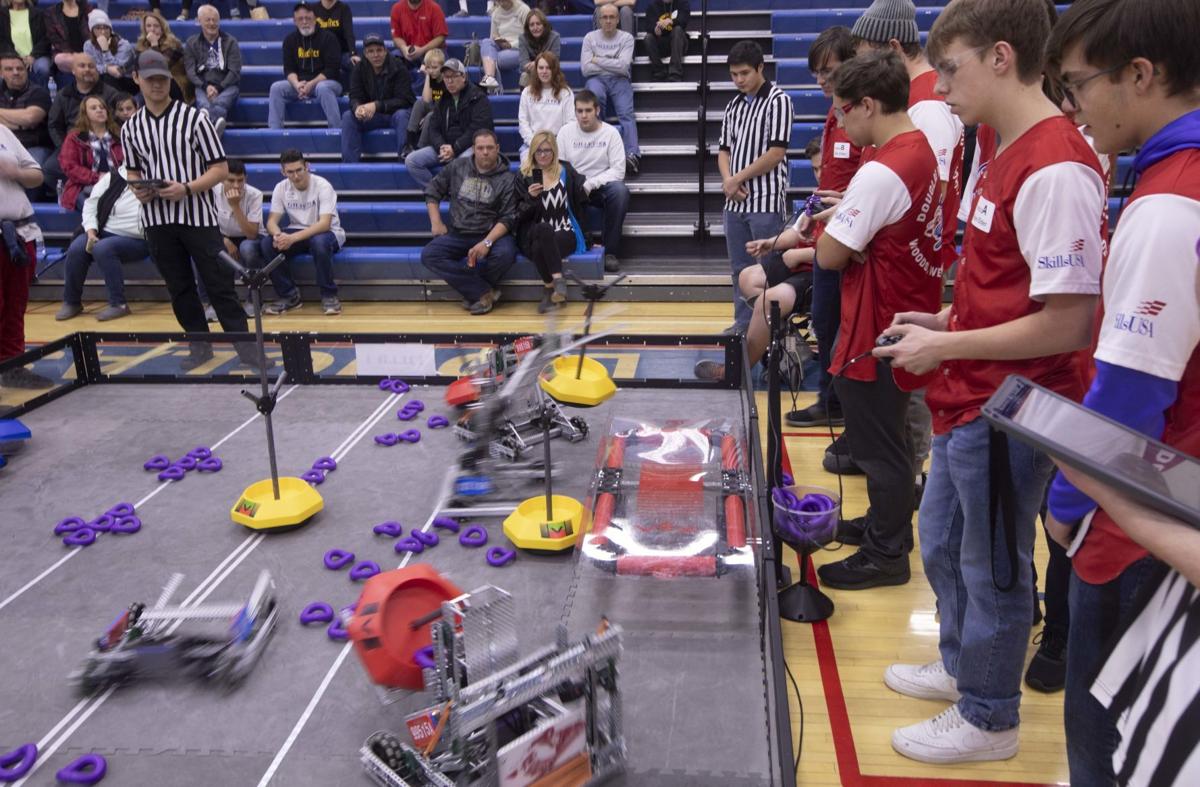 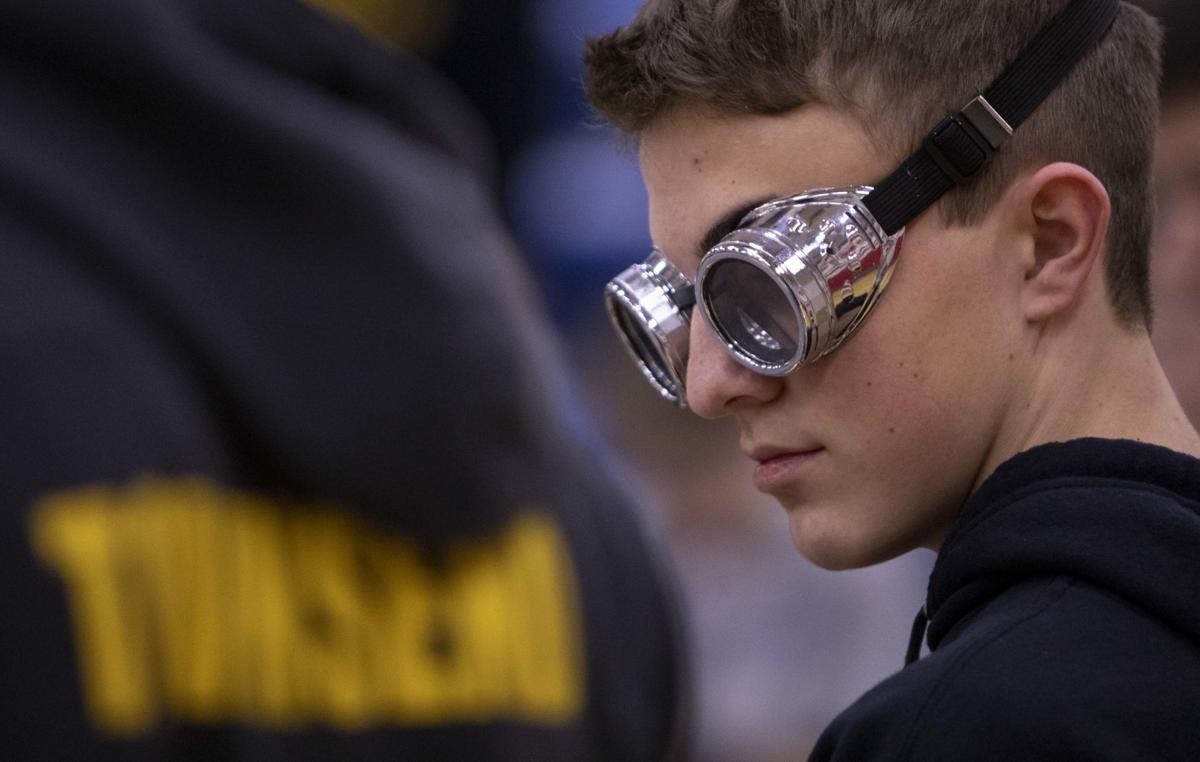 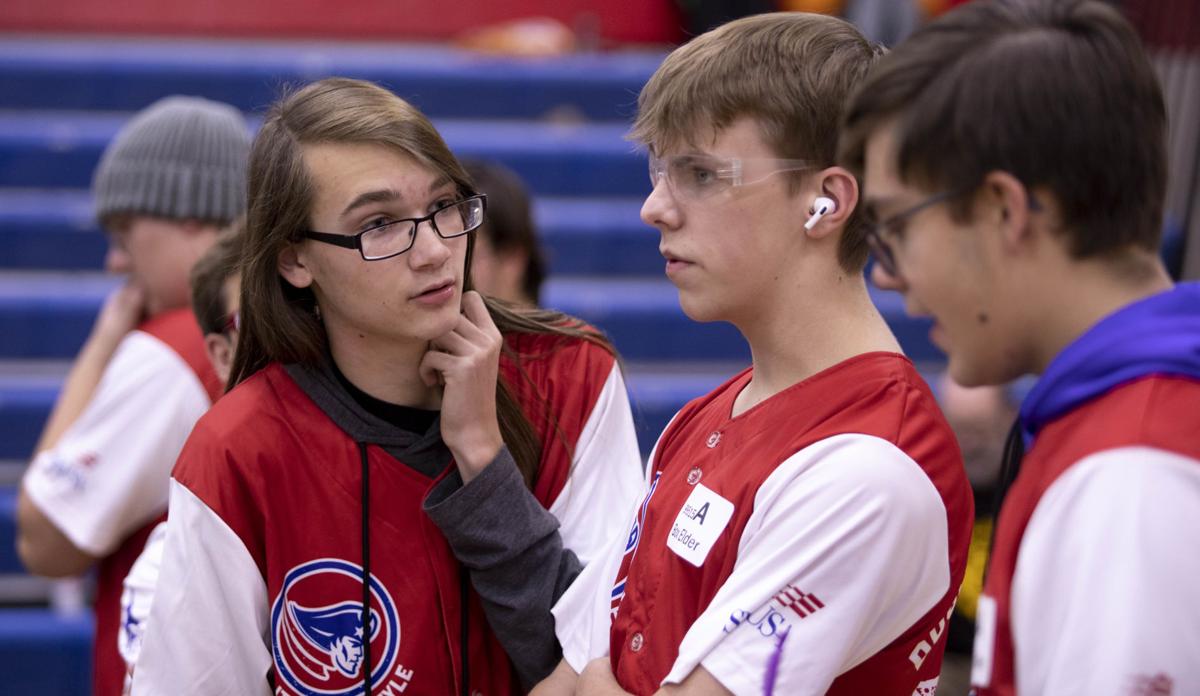 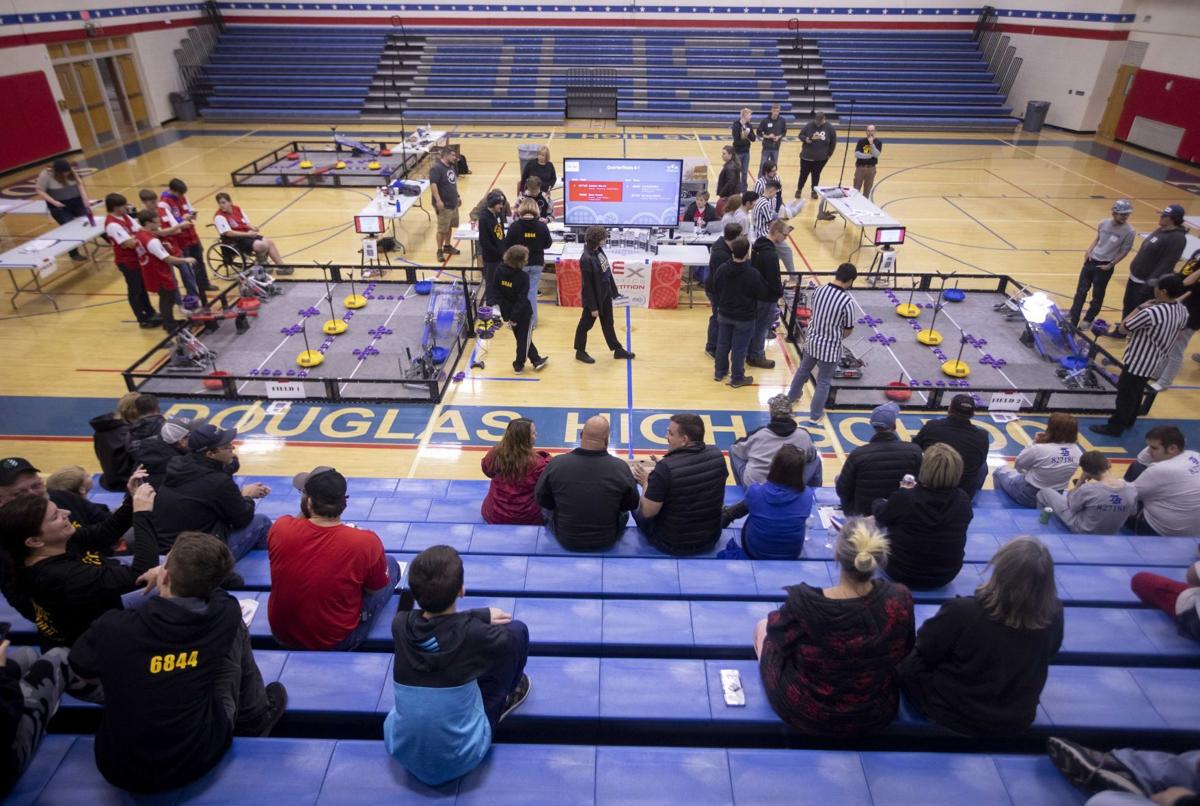 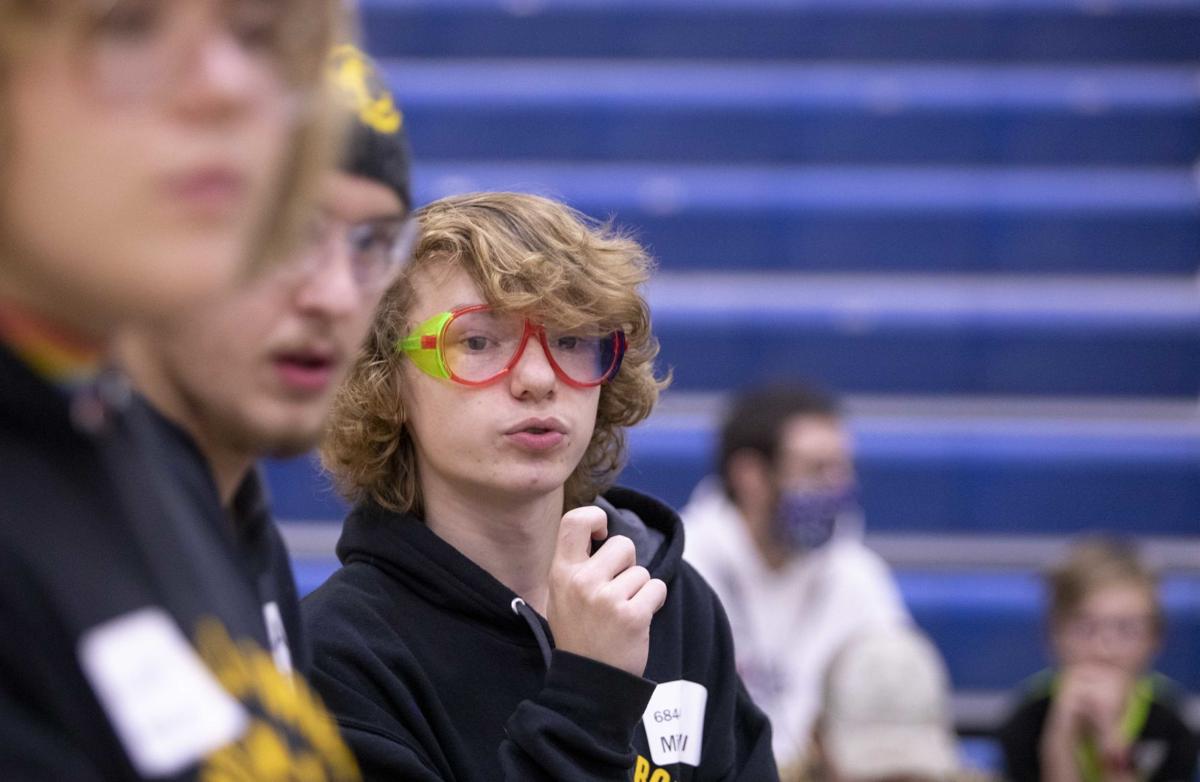 Late in the Douglas VEX Battle on Saturday afternoon, Lilly Schubach made a dash from the Douglas High School gymnasium, where the robotics competition was taking place, to the hallway where equipment had been stored. She returned just a few moments later.

“We were trying to get a new battery because we like to change out the battery almost every single round,” she said. “When the battery starts to die, the robot starts to be sluggish.”

Schubach, a senior at Thunder Basin High School in Gillette, Wyoming, was part of a team called "No Team Name," comprised of high school students from Gillette. The team shared the tournament championship Saturday with the Xylotropics, from Mitchell High School in eastern South Dakota.

Schubach’s maintenance run was among the tweaks and adjustments that characterized a day of heavy thought and quick execution, with 22 area teams competing – and cooperating – with each other. The title-sharing that occurred at the end was by design. One salient characteristic of the VEX competition is that it requires teams to form alliances with each other as they play other teams – or pairs of teams.

The Xylotropics and No Team Name had formed such an alliance.

“The cool part is that they don’t know each other before they come here,” said Beth Schneider, robotics advisor at Mitchell High School. “So they come here and they’re just figuring out who they want to make an alliance with. And when an alliance takes them to a win, that’s amazing.”

The competition yielded several other awards, in addition to the tournament champions.

The Douglas VEX Battle was part of a series of competitions called the VEX Robotics Competition Tipping Point: 2021-2022. The series culminates with the South Dakota VRC State Championship on Feb. 26, 2022, at Douglas High School. It will be the first time the school has hosted the state championship.

The competition contained, literally, many moving parts. Students commanded robots they’d built to snag small rings, drag larger mobile goals, manipulate platforms and perform other tasks to score points. Team members worked with each other, and they stepped across the aisle to work with other teams in their alliances.

Floyd Korzan, a freshman at Mitchell High School and a member of the Xylotropics, said the team worked especially hard on the autonomous phase.

“The first time we ever created our autonomous (system) it was really slow,” Korzan said. “We couldn’t get there fast enough.”

Teammate Connor Axtell, also a Mitchell High School freshman, added: “We cranked up the speed so it could get there before the other robots.”

The two students prepared for the competition with a third teammate, Phillip Schlecke, also a Mitchell High School freshman.

Brody Sturdevant, a senior at Thunder Basin High School, in Gillette, said getting the robot onto the ramp during a match – something that garners points – was among the toughest challenges.

“It was lots of practice, trial and error,” he said. “Most of it was torque and finding the right pace so we didn’t fly off the other end.”

Sturdevant was on “No Team Name,” along with Schubach, Devin Clyde and Jacob Decker. Clyde and Decker attend Campbell County High School, also in Gillette.

Jason Boeding, Career and Technical Education teacher and robotics coach at Douglas High School, noted some fundamental skills that students learn to apply when they study and practice robotics. He mentioned coding, or writing programs for the robots. He also noted the skills of driving the robots and of working with other students.

Boeding said his own interest in robotics began in earnest when he was a student at Black Hills State University.

“I learned how to code there,” he said. “I like how you can take a program and be able to run functions for unique things. You can develop systems with it.”

The whole process of watching an idea – or a code – slip into physical reality can excite students, he explained.

“It’s all about seeing what you build become alive,” he said.

Wyatt Rath, a senior at Douglas High School and among the participants on Saturday, underlined the connections that students develop as they compete.

“I feel like you get a lot closer to your teammates than you do in any other sport,” he said. “You’re more connected. It’s a lot more team-based than any other sport … You need everyone to build the robot and contribute in some shape or form.”

When it comes to the coding part of robotics, Devin Kjellerson, also a senior at Douglas High School and a teammate of Rath, knows exactly what he likes about coding.

“It’s difficult,” he said. “That’s what I like about it. I like it because there’s an infinite (amount) of things you can do with it. I’m learning new stuff every day doing it.”

Cody Rogers, on a team at Lead-Deadwood High School, recalled how his interest in robotics sprouted when he was a child. He noted a seemingly simpler activity, but one he said harbored all sorts of potential for a young child.

“I used to play Legos a lot,” he said, something that led – with the introduction of metal and more complex construction strategies – to the building of robots.

“In Robotics 1, we actually start out with Legos,” Rogers said. “That’s how we learn how to code and build and everything else.”

Rogers’ older sister, Samantha Rogers, was there to support him. Samantha Rogers said she coaches competitive cheer and dance at Lead-Deadwood High School. She touched on a whole different set of skills and pressures in that field.

“In dance and cheer you can’t fix anything in between (sessions),” she said. “You have to stick with what you have, whereas he (Cody) can come back and fix things.”

Stian Olson, one of the judges, is a mechanical engineering student at South Dakota Mines. Saturday’s event, he explained, featured awards beyond the tournament champions for which judges consider things such as the students’ engineering notebook, the judges’ interviews with students, and the judges’ consultations with referees about the students’ – and the robots’ – performances.

Deon Estebo, president of the South Dakota Mines VEXU Robotics Club, served as the head referee on Saturday. He stressed the importance of consistency and noted, in this competition, just how complicated the field of play can be. Small spaces are packed with multi-size objects that end up, after each match, in different spots and possibly strange combinations.

“It’s a lot to track,” Estebo said, noting that two referees observe each playing area. “We split the field in half, so half is covered by one ref and half by the other.”

Throughout Saturday’s competition, Claudianne Moisset, a chemical engineering student at South Dakota Mines, served as emcee. Dexterous during lulls in the action, Moisset seemed to snatch facts out of the air about dinosaurs, soft drinks – and about South Dakota Mines. She noted at one point that the school was founded in 1885, four years before South Dakota became a state.

Moisset also bantered with students, querying them about their robots or about other aspects of their work.

“I really like it when high school kids are excited about STEM,” she said during a break. “Seeing them put all the work in it gets me really excited, and then I try to recruit them to come to the School of Mines. The more excited I am about science, the more I show them (they) can continue doing it in the future.”

Moisset, just a few years older than the students competing, is also looking toward her own future.

As intense as the students’ focus was on Saturday’s competition, they too seemed to be mastering skills that could lay the groundwork – one day in the future – for a much larger endeavor.

The following awards for Saturday's competition are announced at https://www.robotevents.com/:

These gorgeous blue sunsets are very unique to Mars

These gorgeous blue sunsets are very unique to Mars 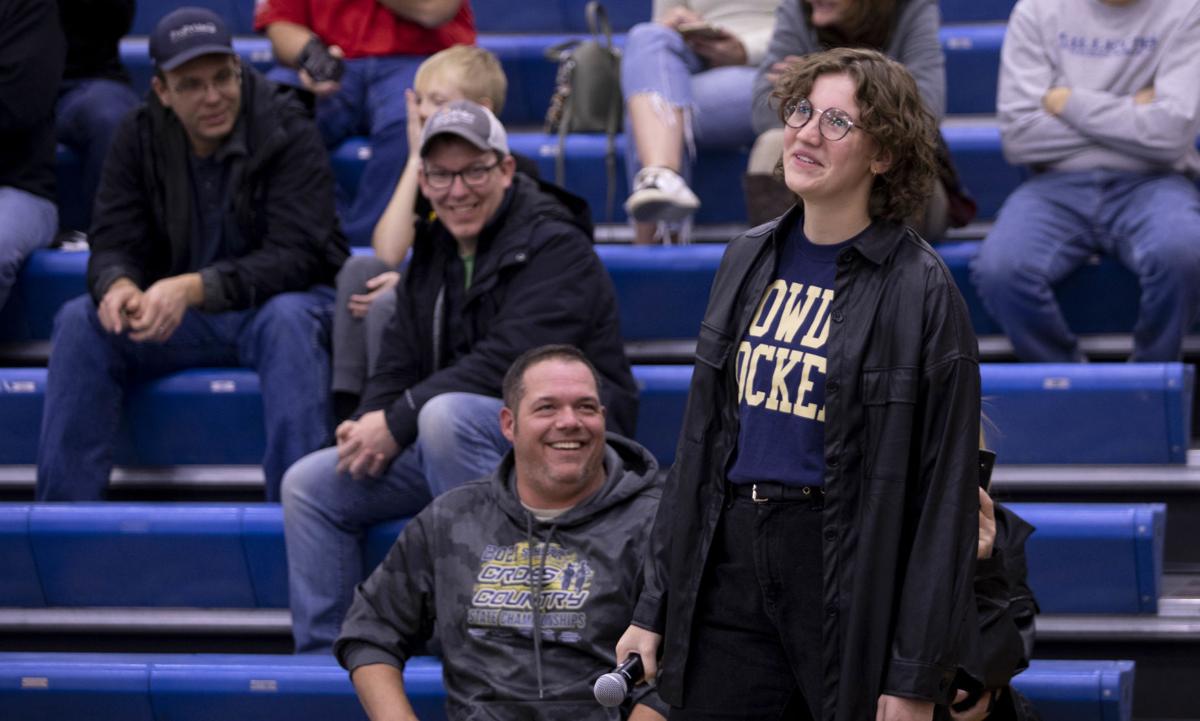 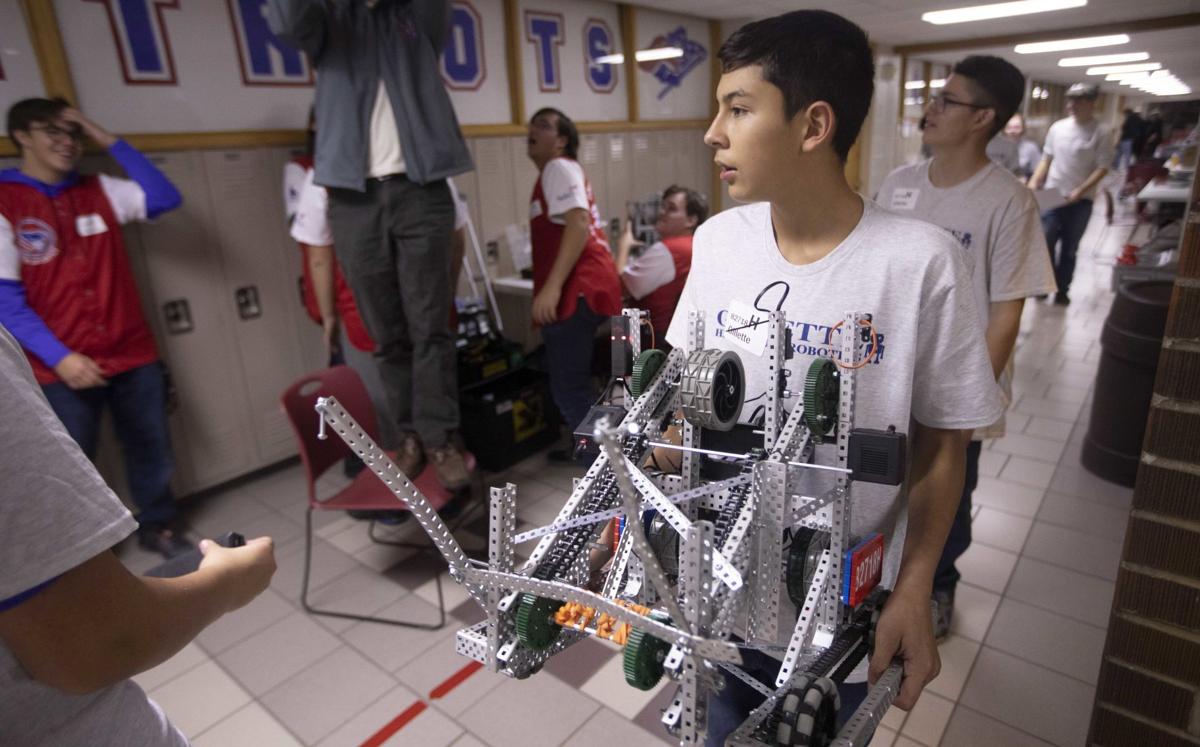 Students prepare to compete in the quarterfinals on Saturday. 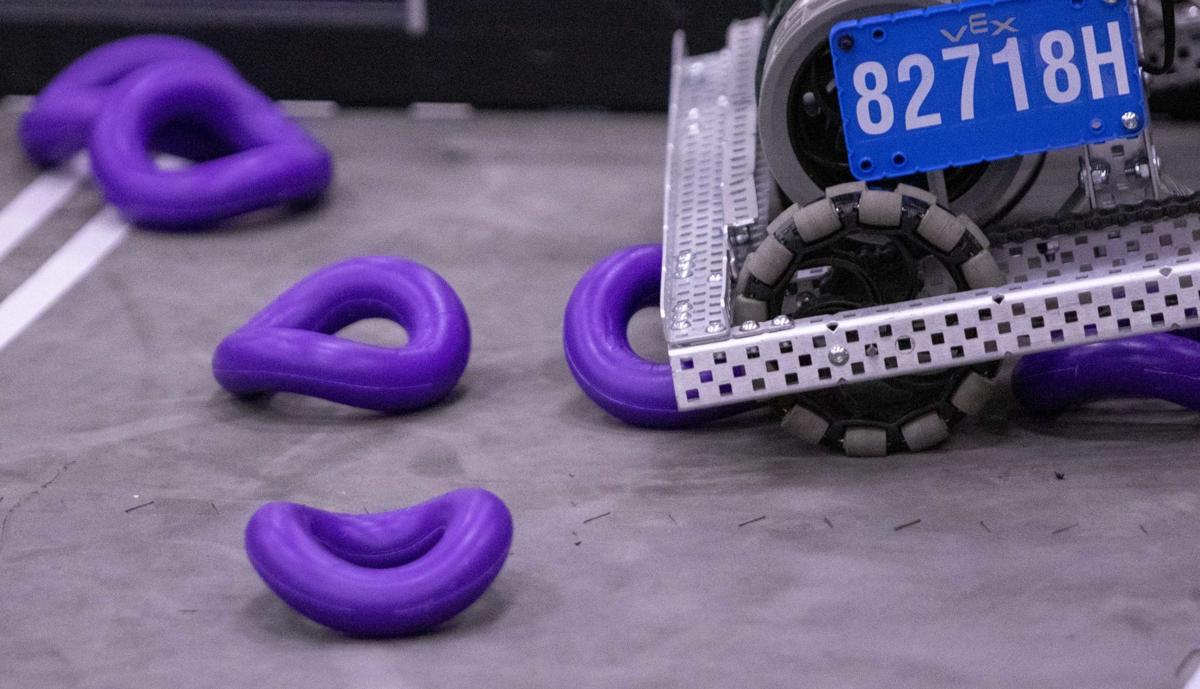 Students compete in the Douglas VEX Battle on Saturday. 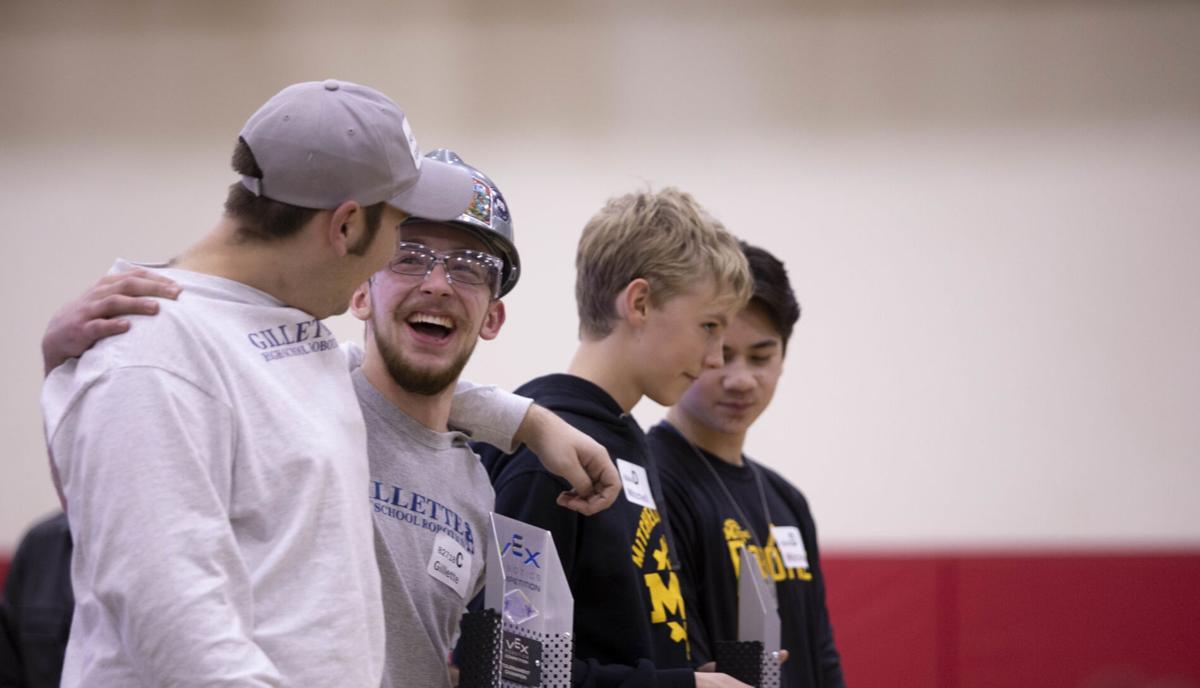