On Monday, Vancouver-based Mineral Mountain Resources notified the South Dakota Department of Environment and Natural Resources that the company planned to resume its exploratory drilling project by the end of this week.

It’s been about a year since Mineral Mountain suspended its drilling operation. From February 2018 to September 2018, the company drilled nine holes to obtain core samples in a mountainous and forested area of the Black Hills just east of Rochford. The holes averaged about 1,000 feet in depth and were plugged with bentonite. 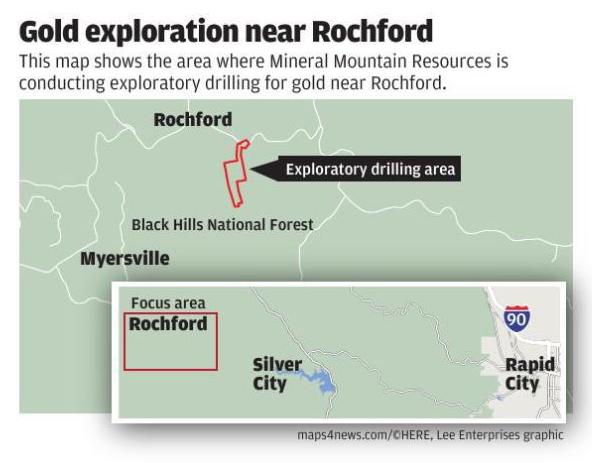 The company has a plan approved by state government to drill up to 111 more holes at 10 drilling sites on privately owned land in the area of the historical Standby Mine.

In a Sept. 19 news release about the next phase of its drilling project, Mineral Mountain struck an optimistic tone.

“The Rochford Project is vastly under-explored and has the potential to host several district scale gold discoveries,” the company said.

Mineral Mountain will purchase water for its drilling project from the city of Lead, according to the DENR spokesman. Water is used in the drilling process to cool and lubricate the drill.

Mineral Mountain announced Sept. 18 that it had solidified its land holdings in the project area by completing a three-year option to purchase nine tracts of 67.45 contiguous acres from G&D Gold Mining Co., a South Dakota corporation, for $500,000 in U.S. money.

The officers and directors of G&D Gold Mining Co., according to its publicly available annual report, are Jim DeLeo, Melissa DeLeo, Mike Mackai, Brandon Mackai and Kristiana DeLeo, all of Minnesota.

“The Standby Mine Property has been held in the DeLeo family for well over 100 years because they passionately believed that an economic gold ore body occurred within the limits of the Standby patents,” said Nelson Baker, president and CEO of Mineral Mountain, in the Sept. 18 news release.

Baker said that if Mineral Mountain finds evidence of enough recoverable gold for a mine, the company will name the gold deposit after Jim and Gina DeLeo’s grandfather, George Beardshear, a mining engineer and the original owner of the Standby patented mining claims.

Mineral Mountain is one of several companies either exploring or planning to explore for gold in the Black Hills.

F3 Gold, of Minneapolis, is working with the U.S. Forest Service on an environmental assessment of that company’s planned exploratory drilling project near Silver City. Wharf Resources, which operates the only active, large-scale gold mine in the Black Hills, has a plan approved by state regulators to conduct exploratory drilling in hopes of extending the life of its existing mine near Lead.

Wharf Mine shows off reclaimed area

Reclamation is nearly complete on a part of the Wharf Mine near Lead that is no longer producing minerals, a mine official said Thursday durin…

Spring has sprung, and it’s time to think about the great outdoors and its resources. I would argue that the most important natural resource i…

Gold search focuses on one long hole near Rochford

A Canadian company searching for gold near Rochford is drilling one long, diagonal hole this fall and winter, according to its top official.

There may be more gold in those hills.