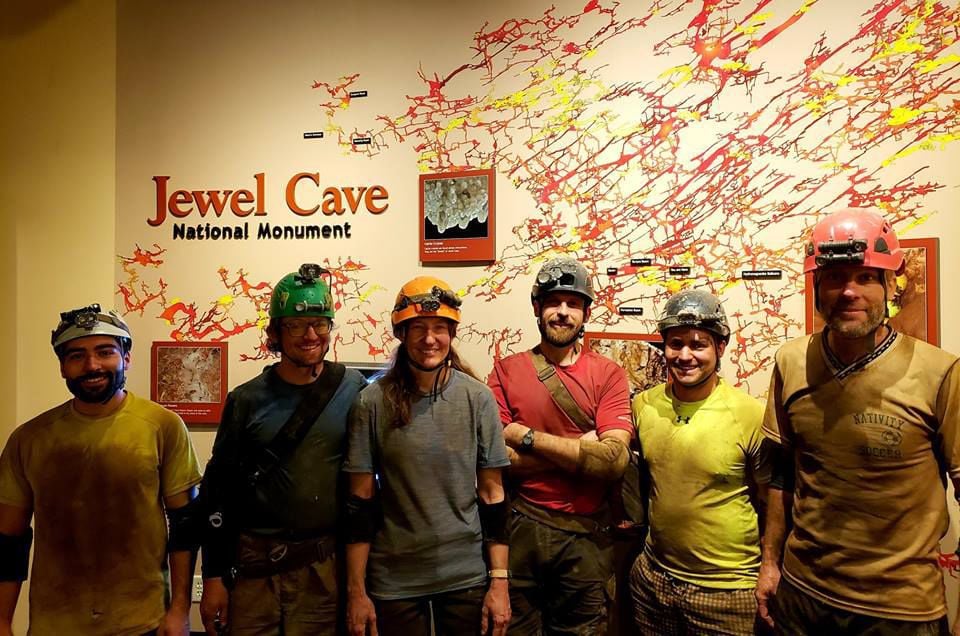 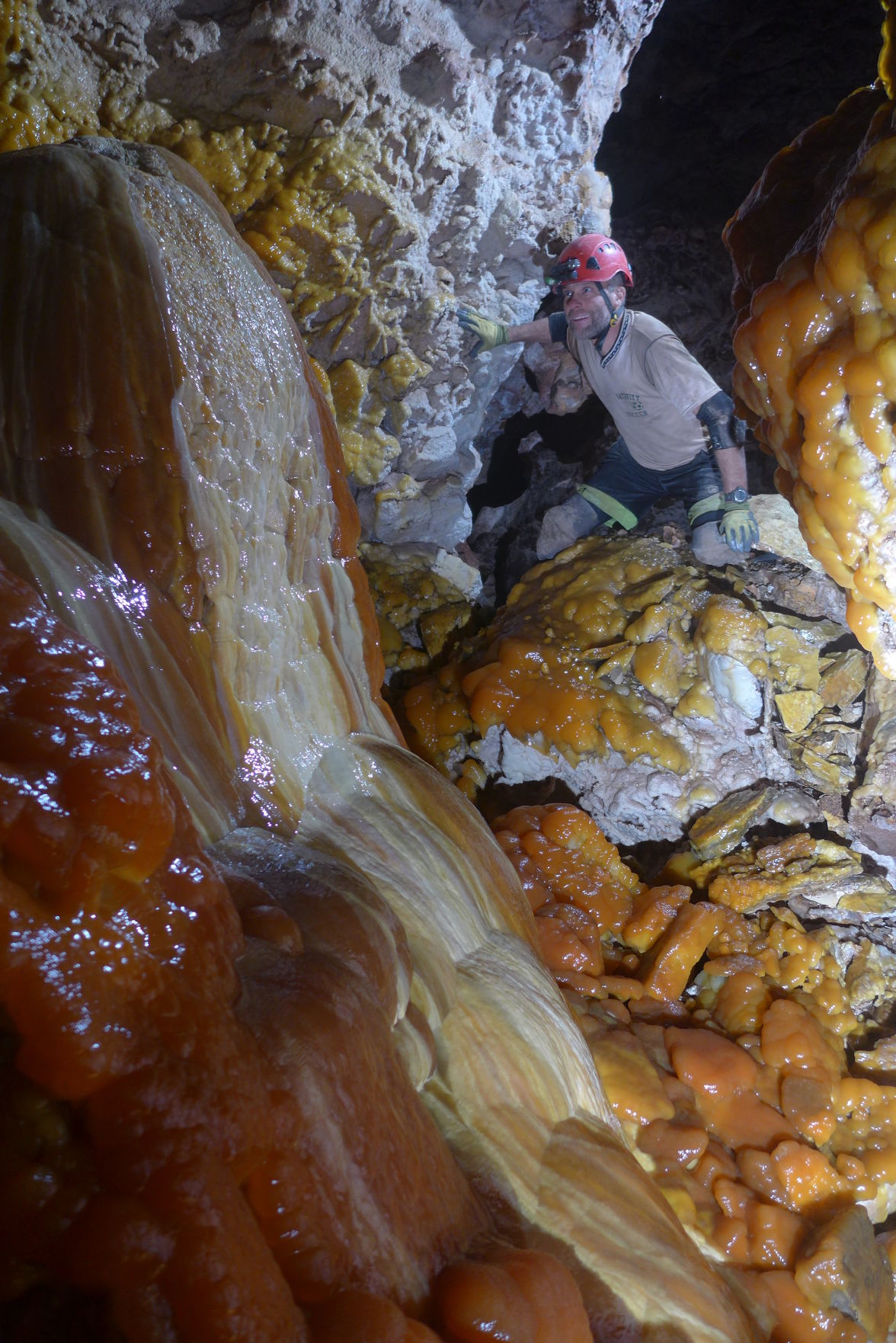 Stan Allison views a large stalagmite discovered by cavers on a Dec. 15-17 expedition into Jewel Cave, during which the 200th mile of the cave was mapped. 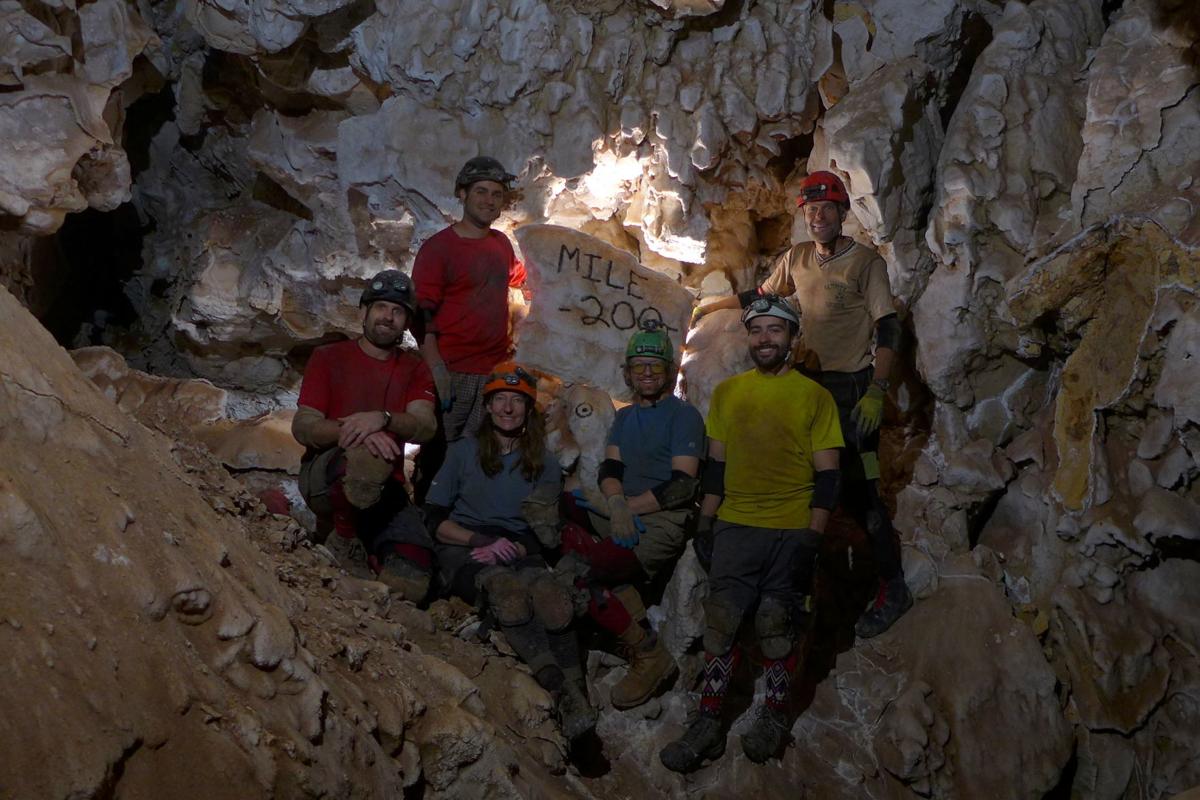 Six volunteer cavers were greeted like returning astronauts Monday night after they emerged from mapping the 200th mile of Jewel Cave and reported the discovery of a stalagmite that could be the cave’s largest.

About 50 people were on hand at Jewel Cave National Monument for a potluck and a celebration of the mapping milestone. The greeting party included 94-year-old Jan Conn, who pioneered the exploration and mapping of the cave with her late husband, Herb, during a 22-year period beginning in 1959.

Tuesday, Jan Conn said it was gratifying to see a new generation of cavers reach the 200-mile mark, and she predicted more milestones to come.

“We were afraid that when we quit the exploration, it would stop,” Conn said. “But I think the exploration has enough momentum now that nobody can stop it.”

The six cavers who participated in the most recent mapping expedition spent three days in the cave from Saturday to Monday. They descended roughly 730 feet below ground and surveyed 3,100 feet of previously unmapped portions of the cave, where nobody had previously set foot.

Jewel Cave, which is 12 miles west of Custer in the Black Hills, remains ranked as the third longest cave system in the world by mapped miles, behind Mammoth Cave in Kentucky (about 400 miles) and the Sistema Sac Actun/Sistema Dos Ojos cave system in Mexico (about 215 miles). Another Black Hills site, Wind Cave, is seventh on the list.

Adam Weaver is one of the cavers who participated in the mapping of Jewel Cave’s 200th mile. Like others on the trip, he has been exploring the cave for many years and is proud to be continuing the project pioneered decades ago by the Conns, who got their start in caving with geologist Dwight Deal.

To explain the appeal of subterranean adventure, Weaver made a celestial comparison.

“We’re mapping passageways, and if the passageway ends and there’s no more passageways off it, then we may go down and make the map of it, and nobody will ever go there again,” Weaver said.

“There’ll be some sediment and you’ll put a footprint in it, and it’s kind of like the moon,” he continued, “because there’s no weather, and that footprint is just there in the sediment and no one ever sees it, and it’s there until maybe 10,000 years go by and the cave air eventually blows it away.”

Continuing on that theme, another of the expedition’s cavers, Christopher Pelczarski, said Jewel Cave is one of the most remote and isolated places a person can experience — perhaps even more isolated, in at least one respect, than space. Unlike astronauts, who can communicate with people on earth, cavers on expeditions deep into Jewel Cave are incommunicado with the world above.

Pelczarski and Weaver are from the Black Hills, as are two of the other members of the expedition, Rene Ohms and Dan Austin. Stan Allison is from Colorado, and Garrett Jorgensen is from New Mexico.

During the expedition, the cavers discovered a giant stalagmite, which they described as possibly the largest ever seen in the cave. It measures roughly 7 feet in height and 5 feet in diameter. The cavers took to calling it “Girth Brooks,” but the official name will be determined by officials with Jewel Cave National monument.

Further trips to map more miles of Jewel Cave and make more discoveries are already in the works.

“The potential for exploration in this cave is almost unlimited,” Weaver said. “The only thing that will limit it will be the limit of human endurance.”

Dark sky areas perfect for stargazing in the U.S.

Dark sky areas perfect for stargazing in the U.S.

The Moon could be hiding water on its rough, bumpy exterior

The Moon could be hiding water on its rough, bumpy exterior

Brett Oleson does not know which of several possible methods his workers will use to get concrete into Jewel Cave for a $4.86 million construc…

A deadly bat disease has been confirmed in South Dakota for the first time.

Michelle Wheatley has been selected as the new superintendent of Jewel Cave National Monument.

Replanting a forest, with 'hoedads' and hard work

The people involved in reforesting the Jasper Fire area have patience in spades — and in hoedads.

A Jewel in the national park system

“This is a small cave,” read the sign outside Jewel Cave.

There may be only one silver lining to the elevator problems that have prevented Wind Cave tours since June.

Stan Allison views a large stalagmite discovered by cavers on a Dec. 15-17 expedition into Jewel Cave, during which the 200th mile of the cave was mapped.