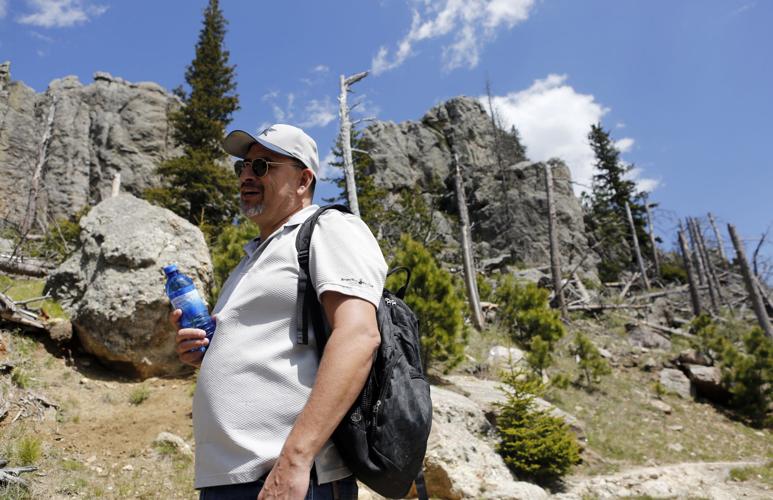 Myron Pourier, great-great-grandson of Nicholas Black Elk, takes a break near the summit of Black Elk Peak during the first hike in 2017 that celebrated the renaming of the peak and a journey that inspired the book "Black Elk Speaks." He'll return to Black Elk Peak on Sunday for the fifth annual commemorative hike. 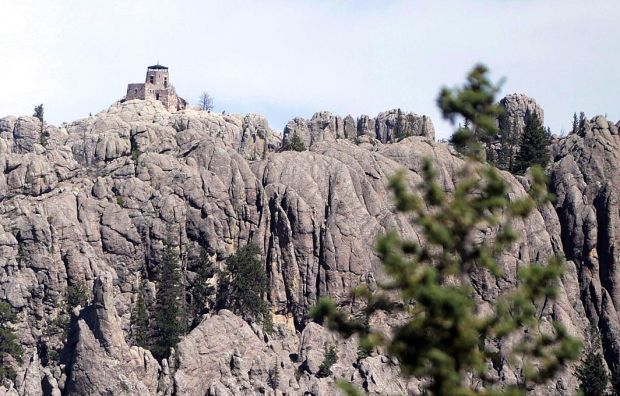 A commemorative hike on Sunday celebrates two milestone events — the renaming of Harney Peak in honor of Lakota holy man Nicholas Black Elk, and a journey that inspired the book, “Black Elk Speaks.”

The public is invited to participate in the hike, which is jointly sponsored by the John G. Neihardt Foundation and Black Elk Legacy. Hikers can meet at 8:30 a.m. Sunday at the Sylvan Lake trailhead. The four-hour hike begins at 9 a.m. and will take place rain or shine.

This fifth annual hike marks two significant anniversaries. Five years ago, the peak’s name was changed to honor Black Elk. Ninety years ago, Black Elk and white poet and author Neihardt traveled to the peak’s summit to revisit the site where Black Elk had boyhood visions about the spiritual world.

In "Black Elk Speaks," Neihardt recounted Black Elk’s story of experiencing a vision in which he was mystically transported to the top of what is now Black Elk Peak. The book has sold at least a million copies and continues to generate interest as a window into Lakota Sioux history and spirituality and as a call for unity among all people.

“This (hike) is an event that we like to get together … commemorating this day when there was a making of relatives ceremony between Indian and white relations,” said Pourier, the great-great-grandson of Nicholas Black Elk.

Pourier is a board member for the John G. Neihardt Foundation, which honors Neihardt as the author of “Black Elk Speaks,” his most famous work. Pourier also works to preserve Nicholas Black Elk’s legacy. He was instrumental in getting the peak renamed, which was a project started decades ago by his grandfather Benjamin Black Elk. Pourier is involved in the effort to get Nicholas Black Elk canonized as a Catholic saint for evangelizing Lakota children and families.

Pourier describes the upcoming annual hike as a time to promote cultural diversity and unity for all walks of life and to pray. Long before the peak was named for Black Elk and before that Harney, it was a sacred place for Native Americans.

“We go up to the top and pay our respects to our culture, not only as Lakota but to all the many cultures that come through this world that made that hike,” he said. “Every year, we pray about peace and tranquility and love and respect for each other. If we as a people can understand that and accept that and reach out and help somebody live today better than they did yesterday, this world would be a better place.”

John G. Neihardt Foundation board member Paul Hammel helped start the commemorative hike. Hammel said Neihardt and Nicholas Black Elk’s journey to the summit and their willingness to learn about each other’s cultures remains relevant and worth honoring.

“We still think the meeting with Black Elk was momentous. Even though this was 90 years ago, this is still a story that reverberates. It’s one culture reaching out to another for understanding,” Hammel said. “We started this hike to commemorate this tremendous collaboration of two people we consider to be great men, and it’s still worthy of doing that.”

In an era when racial tensions are running high in the United States, Hammel and Pourier agree that encouraging people of different cultures to reach out to one another is vital.

“Without understanding, it’s hard to be empathetic or really recognize what challenges each other face,” Hammel said. “Lakota is a very complex culture and their beliefs are so different than the white culture. It is important I think to reach out and try to understand. This is the heart of ‘Black Elk Speaks’ … the Native American side of the story.”

“The (legacy of) Neihardt and Black Elk is all about understanding and trying to reach across a culture divide to tell one culture’s story and share it with the other. I think it’s a more important message now than it was back then,” Hammel said.

“(In terms of) race relations, there’s a lot that’s happened in the last year with George Floyd. There’s a lot that’s happened with Mount Rushmore and fighting for our rights as Lakota people and wanting to be heard,” Pourier said. “This generation of people … we should not be fighting for anything. It should come together by now, regardless of color, regardless of who we are.”

Lead-Deadwood’s Board of Education will consider a policy limiting classroom displays and decorations at its Tuesday afternoon meeting.

Your Two Cents for May 11

In response to the concerned reader who claims “slanted” comments made in Two Cents opinion being “what is wrong" in our society.  Freedom of …

Your Two Cents for May 10

Want to know how to make someone read a book — tell them they can't read it.

A West River legislator gunning for U.S. Rep. Dusty Johnson's job in Congress hopes to tap into a wing of the GOP still smarting over Presiden…

Bans off our bodies rally

Bans off our bodies rally RC

Bans off our bodies rally RC

Myron Pourier, great-great-grandson of Nicholas Black Elk, takes a break near the summit of Black Elk Peak during the first hike in 2017 that celebrated the renaming of the peak and a journey that inspired the book "Black Elk Speaks." He'll return to Black Elk Peak on Sunday for the fifth annual commemorative hike.