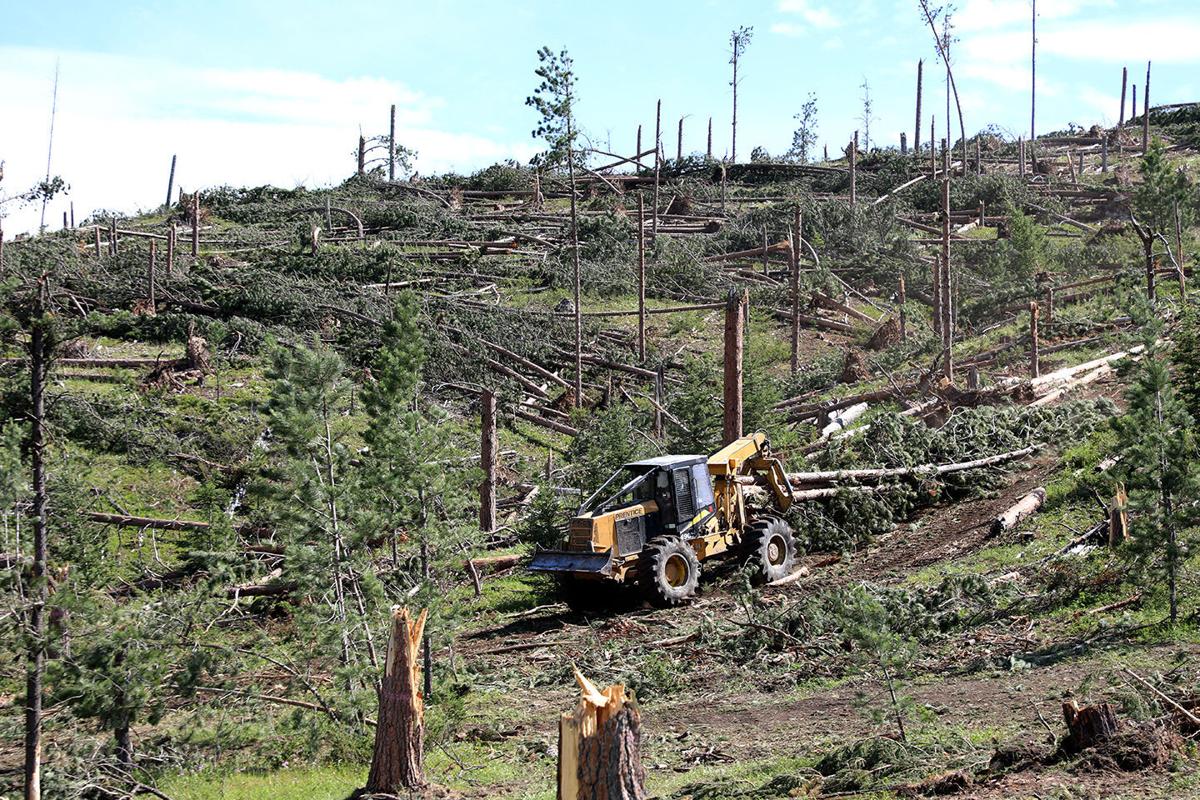 A logger drags timber out of the Black Hills National Forest where three tornadoes ravaged the area this summer. Operations began July 20. 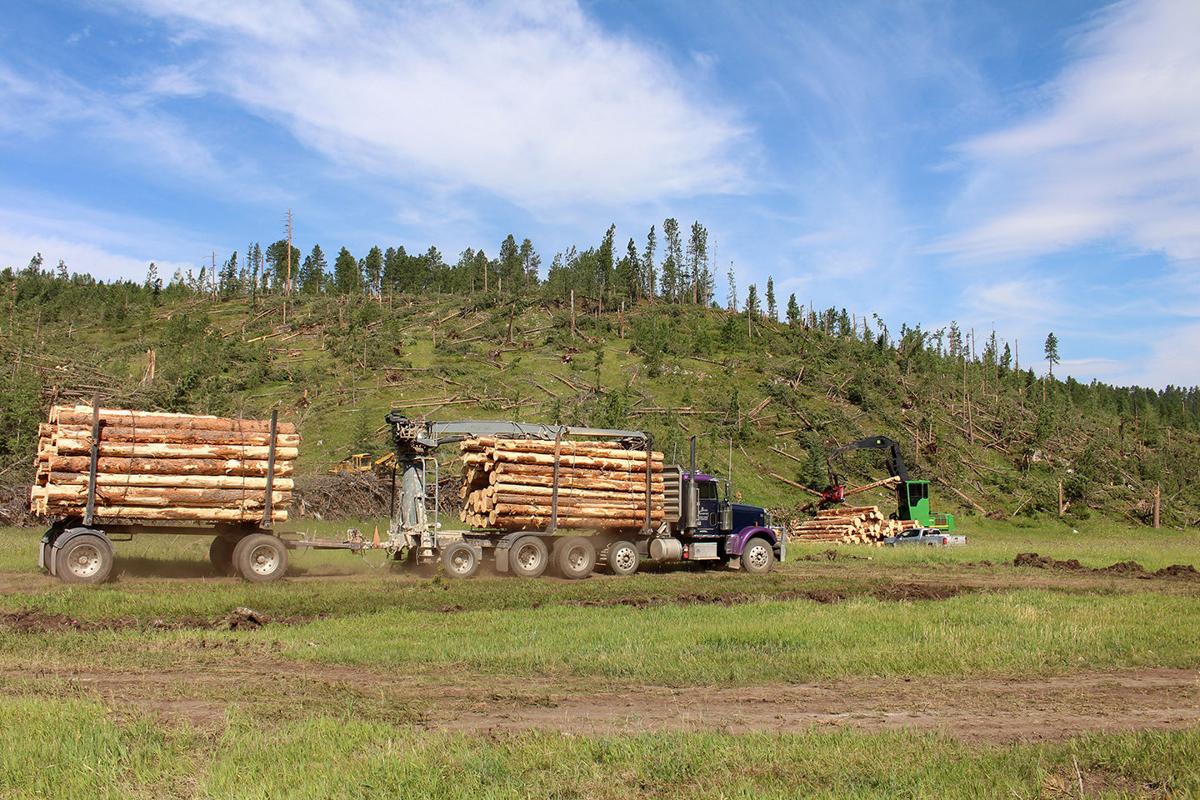 A truck removes cut timber from the Black Hills National Forest in the Spearfish area. 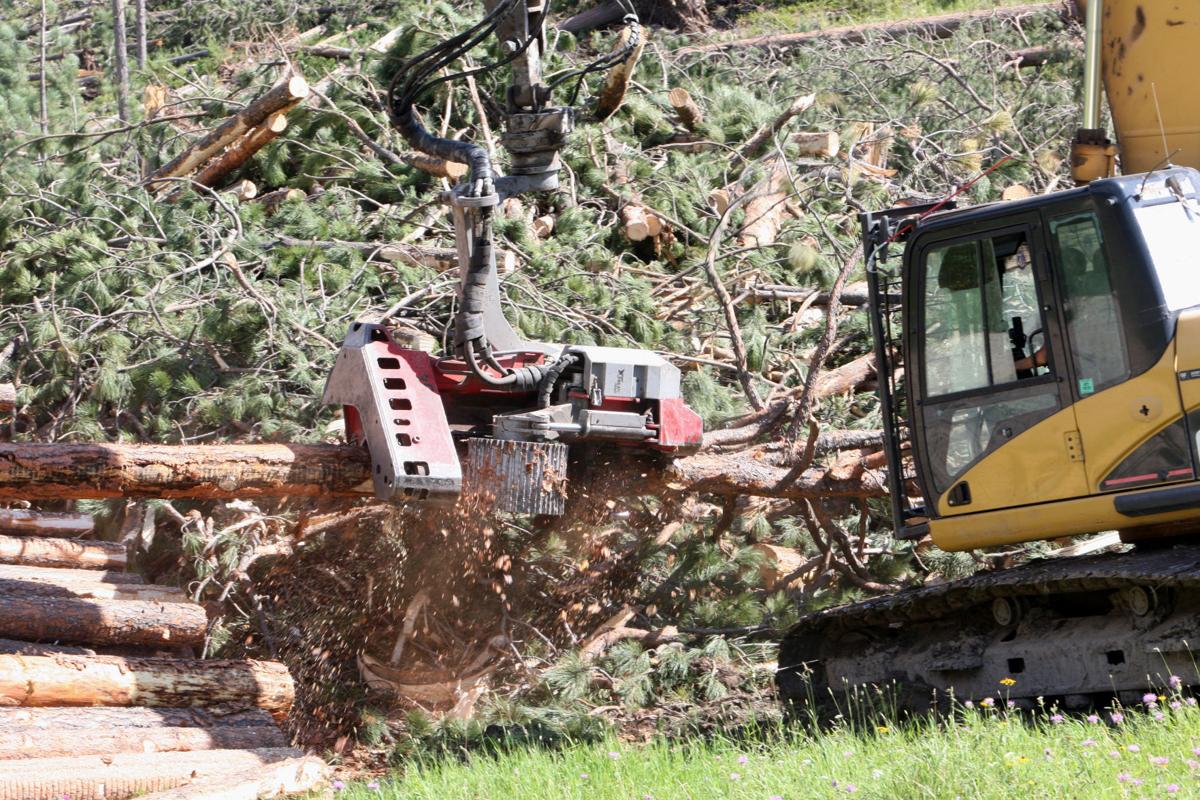 A logger moves a piece of timber in the Black Hills National Forest. Two July tornadoes ravaged about 7,000 acres. Around 2,300 acres will be used for commercial timber.

When Steve Kozel drove down Tinton Road to assess the damage in the Black Hills National Forest from a July 6 tornado, he was 'kind of in awe' looking at the damage.

“You go from a forest that has matured pine trees and to an area where it’s leveled off,” he said. “It’s quite a thing to just think about the power of nature and how natural forces can act upon an environment, and it happens in a short period of time.”

It happened again when the July 10 tornado intersected with the first one’s path and touched down by Tinton near the Wyoming state line and crossed Spearfish Canyon south of Savoy.

For the next few weeks, several companies will continue logging operations in about 2,300 of the 7,000 acres ravaged by storms in the Black Hills National Forest.

Kozel, Northern Hills district ranger for the USFS, said the two July tornadoes intersected with the path of one from 2018.

“Within a four or five square mile box, we’ve had three tornadoes in the last two years,” he said.

The July 6 tornado touched down southeast of Sundance, Wyo., and traveled east. It was rated an EF2, according to the National Weather Service survey. The July 10 tornado snapped and uprooted Ponderosa pine trees and had a wind speed of 105 mph and an EF1 rating.

Kozel said that although he doesn’t have a background in meteorology, he remembers that for all three events humidity was high as well as the temperature and dew point, which can create a rich environment for thunderstorms and tornadoes.

Dave Hintz, meteorologist in charge at the Rapid City National Weather Service, said the Black Hills is accustomed to large hail and strong winds. He said the area averages 12-14 tornadoes every year, although many are “small dancing in the prairie” tornadoes.

“This year proves if anyone had a doubt if (tornadoes) occur in the Black Hills or not, they do,” he said.

Kozel said he’s been with the USFS for 18 years and has restored and recovered landscape after six tornadoes.

Kozel said there’s a six- to eight-week window for commercial-grade timber to be salvaged. He said after that, insects and fungus start interacting with the wood and make it less valuable, although the time table depends on the climate.

“We want to be fairly timely in identifying areas of salvage and make it available for timber purchase,” he said. “In the immediate, a lot goes on and a lot has to be done fairly quickly.”

Only about 2,300 acres will be salvaged. He said the USFS estimates there could be 7,800 timber cubic feet.

The 4,700 acres remaining have a heavy field concentration with downed timber and uprooted trees that could present a long-term fire risk to critical resources, private land and homes.

He said the USFS is working to identify areas to take a more in-depth look at how to cut and pile that timber, particularly in the Spearfish Canyon area.

Kozel said not all of the 4,700 acres will be cleared of downed trees and limbs. There will be some debris left to decompose.

After the July 10 tornado and Kozel and other field workers went out to assess damage and help with safety, he said he was primarily concerned with what happens next.

“It’s the amount of work you have to do fairly quickly and how you go about thinking through it: what you need, what staff assistance you need to accomplish that work,” he said. “You can’t describe seeing something the day before it’s totally leveled, it’s indescribable, the emotional things you go through."

Kozel said most roads are open in the Black Hills National Forest and the main hazard is the amount of equipment and log trucks entering and exiting the area.

He said the salvage should be complete by mid- to late-August or September.

Kozel said the trail system should be open in the next two to four weeks after 10 plus miles are cleared. He said organizations that volunteer with the USFS will help with some reconstruction and moderate to light moving of downed trees and twigs.

A logger drags timber out of the Black Hills National Forest where three tornadoes ravaged the area this summer. Operations began July 20.

A truck removes cut timber from the Black Hills National Forest in the Spearfish area.

A logger moves a piece of timber in the Black Hills National Forest. Two July tornadoes ravaged about 7,000 acres. Around 2,300 acres will be used for commercial timber.