A new report published Tuesday by USDA Forest Service's Rocky Mountain Research Station scientists calls for a 50% to 60% reduction in timber production for the Black Hills National Forest over the next several decades.

The report, entitled "A Scenario-Based Assessment to Inform Sustainable Ponderosa Pine Timber Harvest on the Black Hills National Forest," is a 68-page document based on forest census data taken over a two-year time frame and evaluates harvest level sustainability from a scientific standpoint. 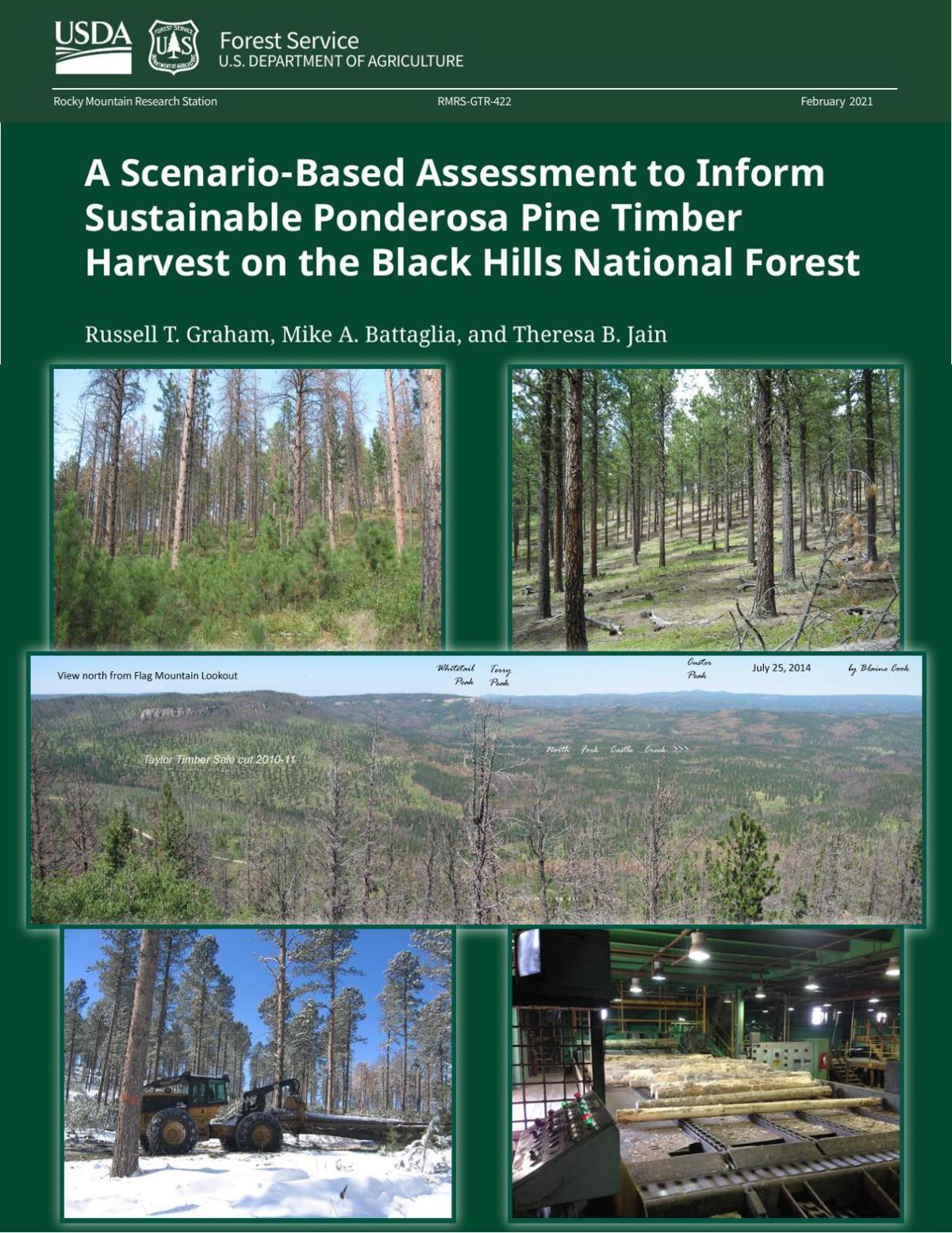 "Since 2000, the Black Hills National Forest (BHNF) has experienced several disturbances that have reduced standing live sawtimber volume which will affect future harvest levels," the report states. "We conducted a quantitative analysis to determine how mortality from these disturbances and potential growth rates will impact short-, mid-, and long-term sustainable sawtimber harvest levels of ponderosa pine on the BHNF."

The scientists made the recommendation following the mountain pine beetle infestation that lasted from 2000 through 2017, killing nearly 9 million ponderosa pine trees in the Black Hills National Forest. Additionally, wildfires burned more than 406,331 acres of land in the Black Hills between 2000 and 2017, although those fires only contributed 0.13% to 0.20% of total annual tree mortality.

"During the last 20 years, the increase in the extent and severity of wildfires burning the forests of the Black Hills in the 2000s and 2010s is reflected in the higher tree mortality rates," the report states.

The USDA's report is clear that it offers scientific information "that can inform discussions concerning future harvest levels on the Black Hills National Forest," but it will be up to the forest managers to make the final decision.

However, one day prior to the public release of the report, Nieman Enterprises announced it will permanently close its saw mill in Hill City, eliminating 120 jobs and 12 contract crews, citing a reduction in timber available in the Black Hills National Forest.

The USDA report issued Tuesday said the primary finding is that the current volume of standing live sawtimber does not support a sustainable timber program at recent rates of harvest, under a wide range of scenarios considering growth and mortality rates.

According to a news release from the USDA, the report along with other best available scientific information can support forest managers, tribes, stakeholders and the public in working together in future forest planning efforts on the Black Hills National Forest.

During the study, a comprehensive review process was used. The news release said scientists, technical and blind peer reviews and an open public comment period produced over 350 comments.

A preliminary draft report was issued in April calling for the reduction in timber production to 70,000 to 115,000 CCF per year, drawing outrage from Pennington County leaders. The Pennington County Commission voted in April 2020 to approve comments to be submitted for the report opposing the change and foreshadowed the closing of the Hill City saw mill.

“We had tremendous input during our comment period, which helped improve the scope and content of the final report,” said Terrie Jain, report co-author. “This resulted in a significant revision from the earlier draft that was presented to stakeholders in April 2020.”

USDA Forest Service Rocky Mountain Research Station will host a free webinar to share the outcomes of the report from 10:30 a.m. to 12:30 p.m. on April 7. The webinar is open for any interested parties to attend. Registration is required to attend the webinar. The link to the registration is as follows:

According to the news release, the presentation will be focused on information about the report and its key findings. The authors will be available to answer questions about the data and analysis, but will not address questions on forest management decisions.