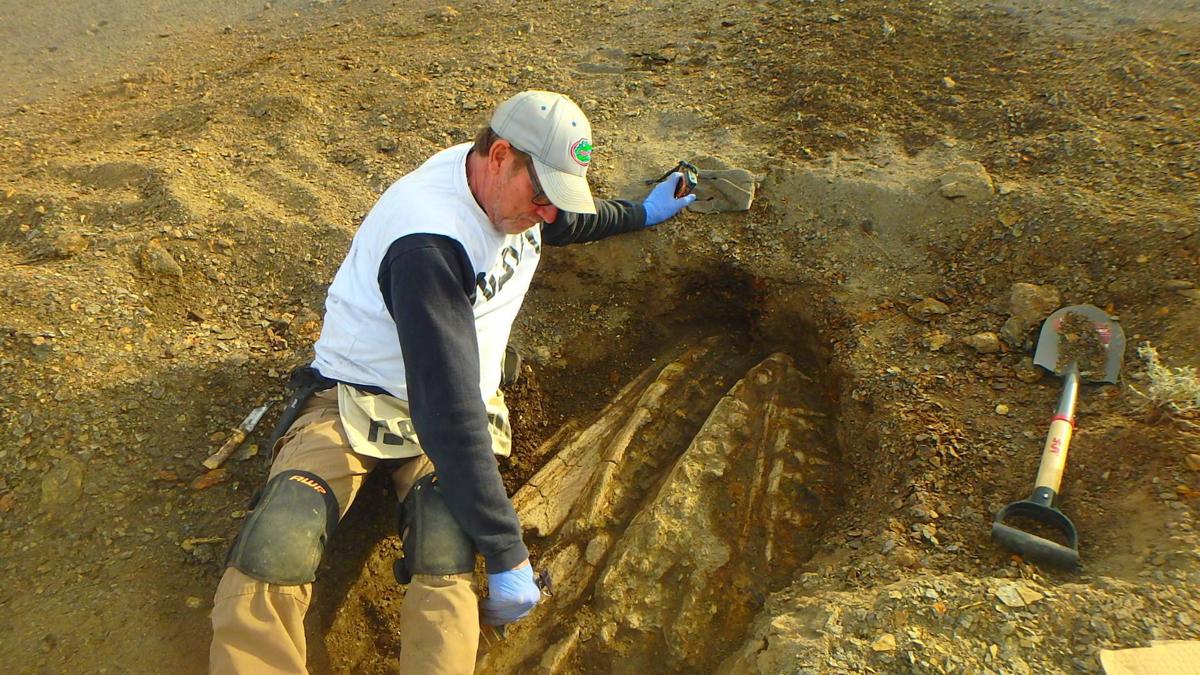 Frank Garcia works at the site where he, his friend and his wife found the skull of a giant ancient marine reptile within the mosasaurus genus. 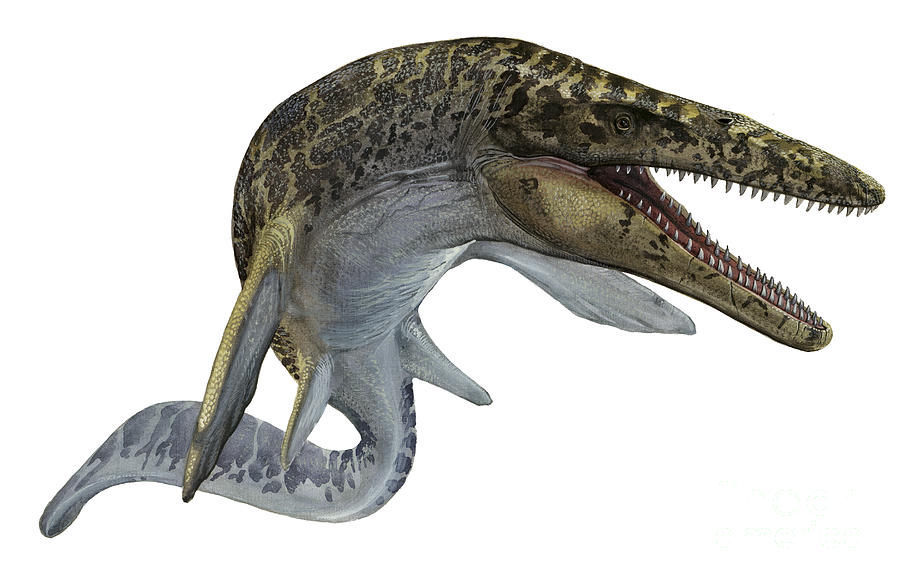 The mosasaurus genus was a completely marine reptile, closely related to Komodo dragons of today, that would have lived between 90 million and 60 million years ago.  It would grow to lengths of more than 40 feet. 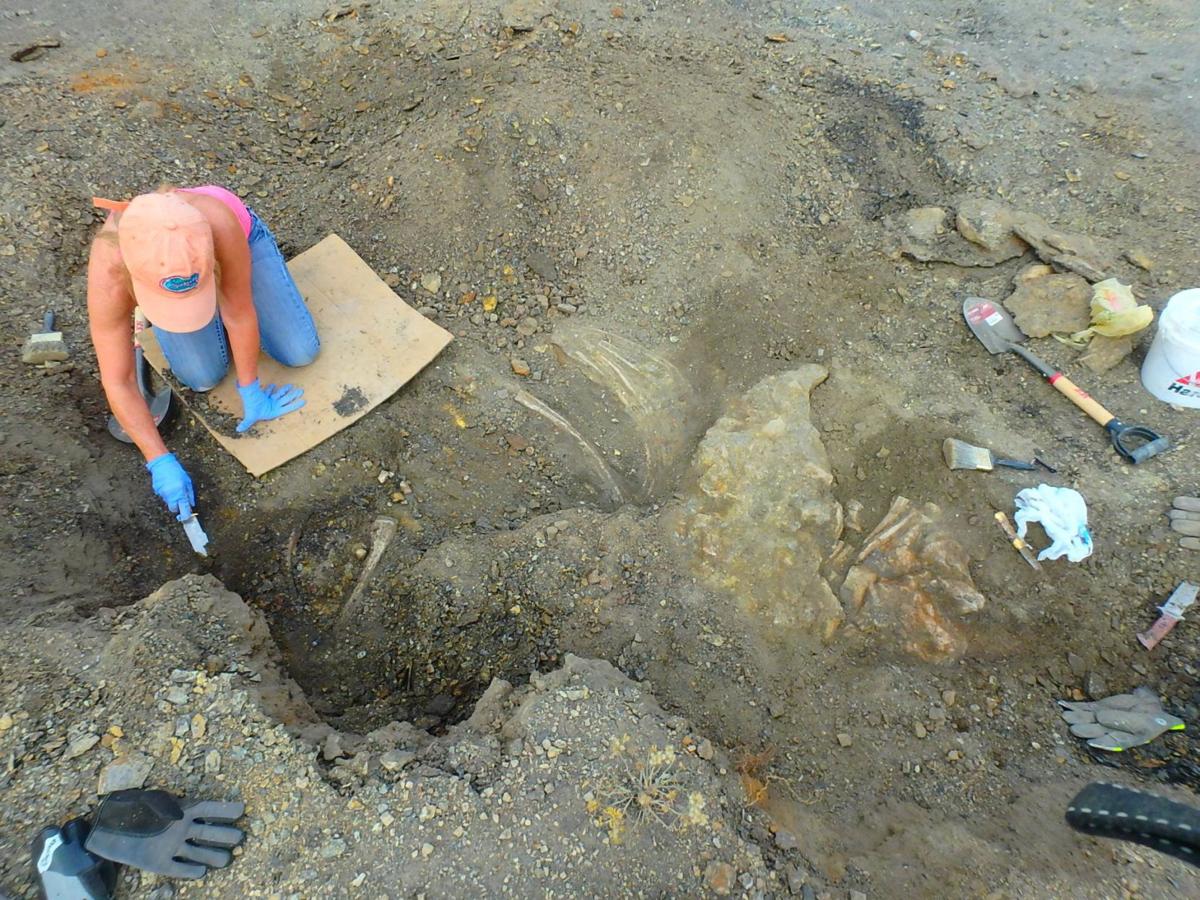 Frank Garcia's wife, Debby, works at the site where they found the fossil of a mosasaur in South Dakota.

When Frank Garcia was only 8, he remembers going to the library in West Tampa, Fla., and opening up a book about dinosaurs. The first page he saw featured a depiction of the massive ancient marine reptile called a mosasaur swimming in deep blue water.

"I saw that and I thought to myself, gosh that is so cool, I sure would like to find something like that some day," Garcia, now 70, said during a phone interview on Friday. "It fueled my passion for paleontology."

In October — more than 60 years since opening that book and after a long career as a world-renowned paleontologist — Garcia finally found what he had been looking for while on a dig in South Dakota.

"It's a dream come true for a child who never grew up," Garcia said with a laugh.

Garcia, his wife, Debby, and his friend Gary Brown uncovered an extremely well-preserved skull of an ancient marine reptile within the mosasaurus genus along with several other pieces of the skeleton.

Peter Larson, president of the Black Hills Institute of Geological Research, called the discovery "very significant." He said other mosasaurs have been found in South Dakota but nothing this complete.

"This looks to be the very nicest one from what I have seen," Larson said, adding that the Black Hills Institute has one partial fossil of a mosasaur. "It's definitely in the mosasaurus genus but it's unclear what the species is."

Larson said mosasaurs are closely related to the Komodo dragon of today but lived only in water. He said they would have been an air-breathing reptile that was carnivorous, could grow to more than 40 feet long and lived more than 60 million years ago.

"From the looks of this one, it's a nice big adult," Larson said.

Garcia moved to Edgemont two years ago after spending a career making significant discoveries in Florida, where he said it eventually got too crowded. Though he had a hand in the discovery of more than 30 previously unknown species of prehistoric animals and his work is featured in museums across the country, Garcia called last month's mosasaur discovery his "greatest thrill."

He wouldn't divulge exactly where the fossil was found but did say it was on private property near the Black Hills, in a Pierre Shale formation. He is afraid other fossil hunters may come bother the landowner if they knew its location.

He and his friend Gary Brown first found vertebra sticking out of the soil while on a fossil hunting mission in late October. They started clearing away the dirt to free the pieces of vertebra and hoping they would find more.

"I figured if I dug down just a little bit in the area, sure enough, we would start finding more," Garcia said.

After a day's work, he came back to the site with his wife the next morning. They sat down and started meticulously brushing away the small pieces of dirt in hope of uncovering more of the ancient reptile.

"As we started to dig, we found ribs and parts of its hand or flipper, all the time I kept thinking if we follow this spinal column, that head has to be here somewhere," Garcia said. "We uncovered more, and I was thinking 'This is the biggest thing I have ever seen.'"

Debby suggested digging under a small bush near where the rest of the fossils were found.

Fourteen inches below the surface under that bush, they found exactly what they were working for. A beautifully preserved, 4-foot long mosasaur skull with two 4-foot long jaws. Garcia figures with a head that large, this specimen would have been more than 50 feet long — about the size of a humpback whale.

The team was able to cast the fossils to protect them and remove them from the site. The skull alone weighed more than 300 pounds.

Garcia said he plans on working with the Black Hills Institute of Geological Research to prep the specimen. "It's going to be gorgeous once it is done," he said.

Garcia said Friday afternoon he plans on donating the find to the Museum at Black Hills Institute in Hill City.

"It was found in South Dakota, so I think it should stay here," Garcia said.

As for the name of the fossil, Garcia plans on calling it Debby, after his wife.

Frank Garcia works at the site where he, his friend and his wife found the skull of a giant ancient marine reptile within the mosasaurus genus.

The mosasaurus genus was a completely marine reptile, closely related to Komodo dragons of today, that would have lived between 90 million and 60 million years ago.  It would grow to lengths of more than 40 feet.

Frank Garcia's wife, Debby, works at the site where they found the fossil of a mosasaur in South Dakota.