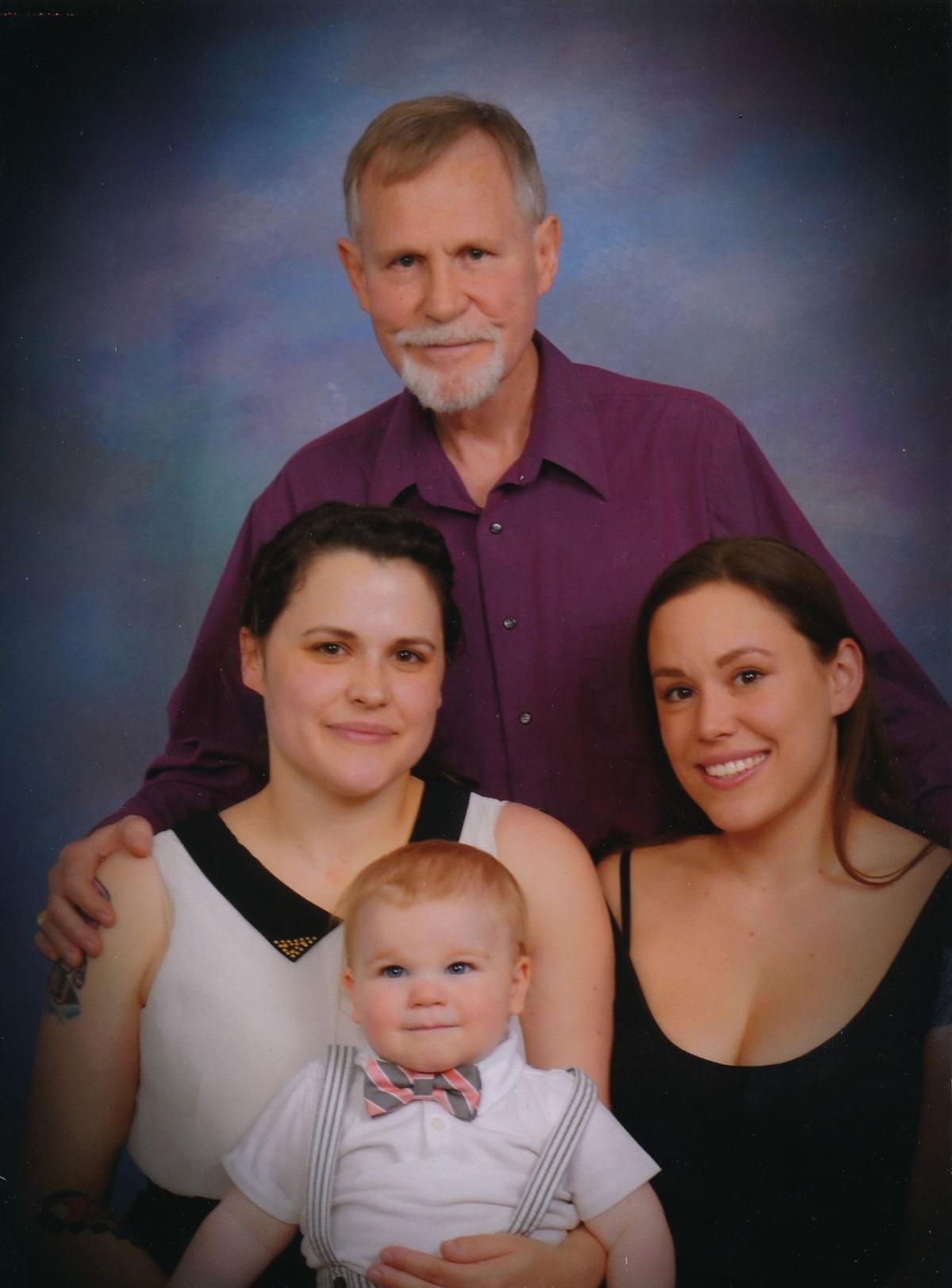 Dan Island poses with two of his daughters, Cathy, left, and Judith, right, as well as his grandson, Alex, in this recent photo. 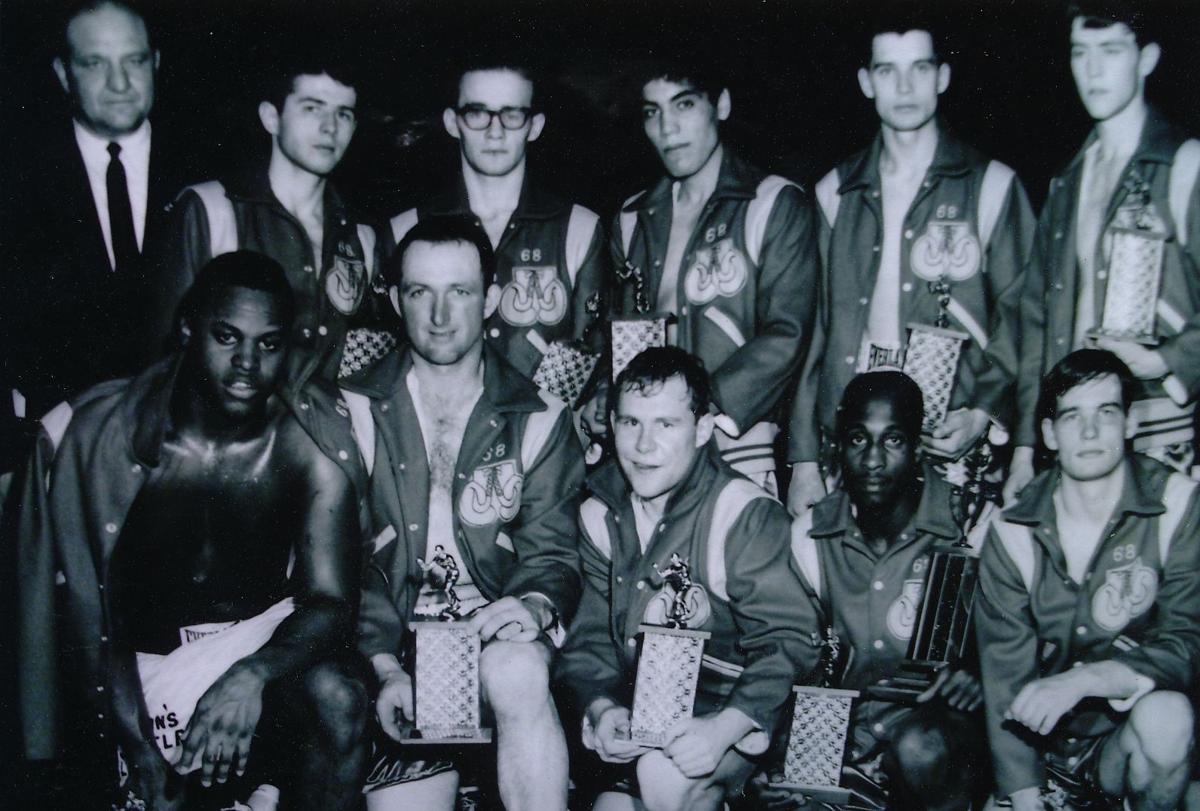 Dan Island, front row center, holds the trophy he won in the 1969 Golden Gloves Tournament in Rapid City. Island later became a coach and led a Rapid City team to the state championship. 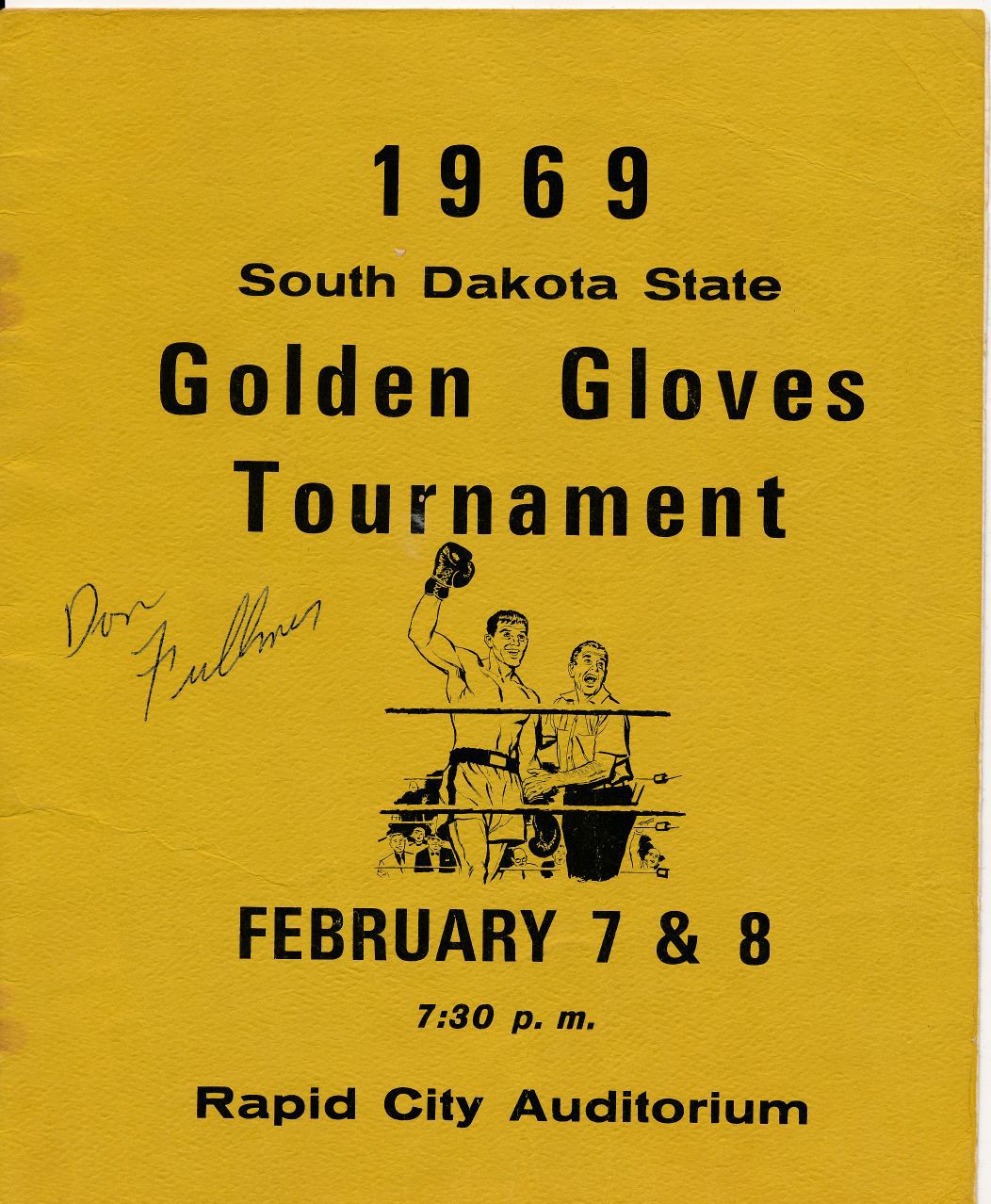 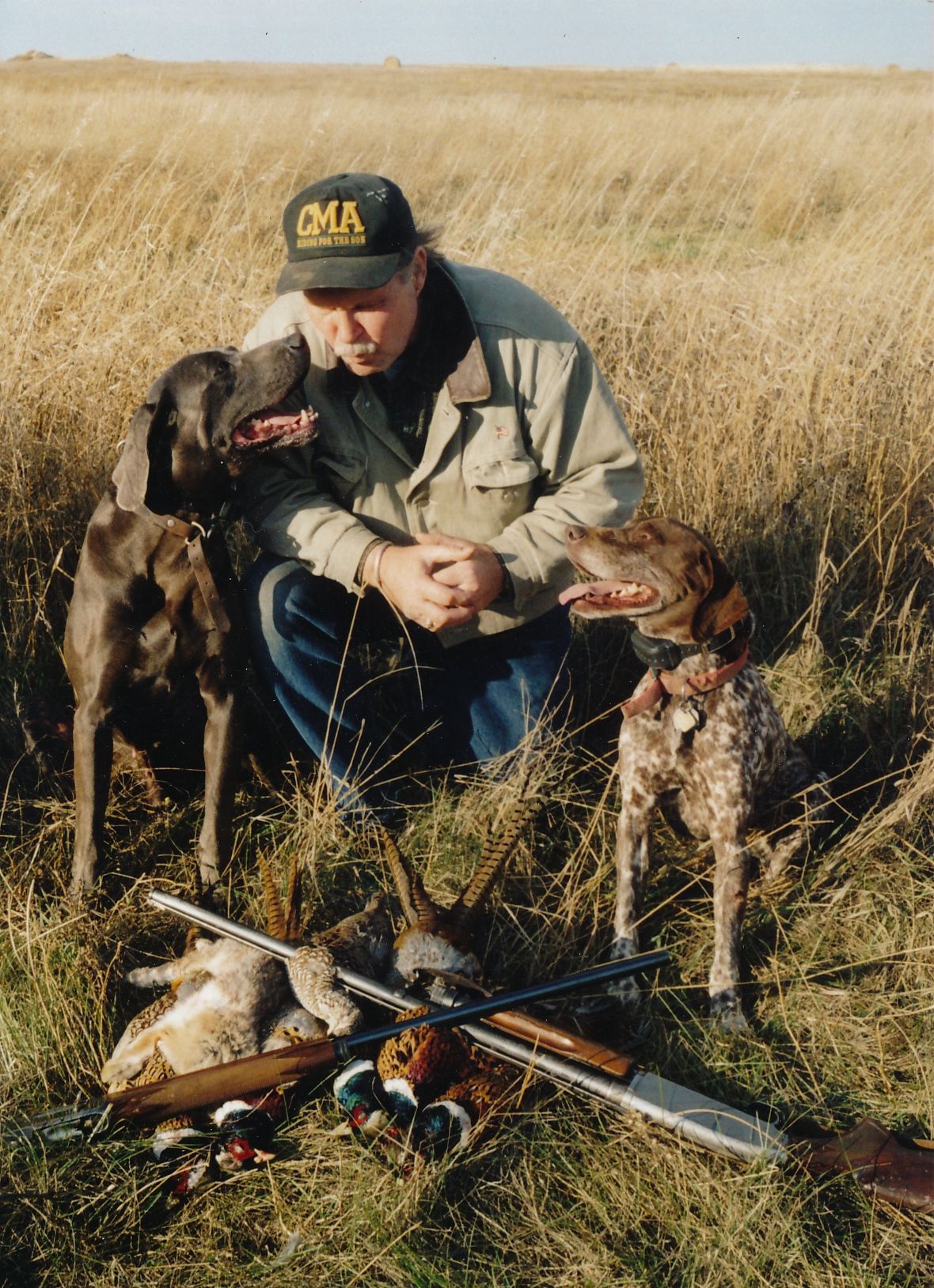 Always the sportsman, Dan Island poses with two hunting dogs and the pheasant he bagged on a fall hunt. 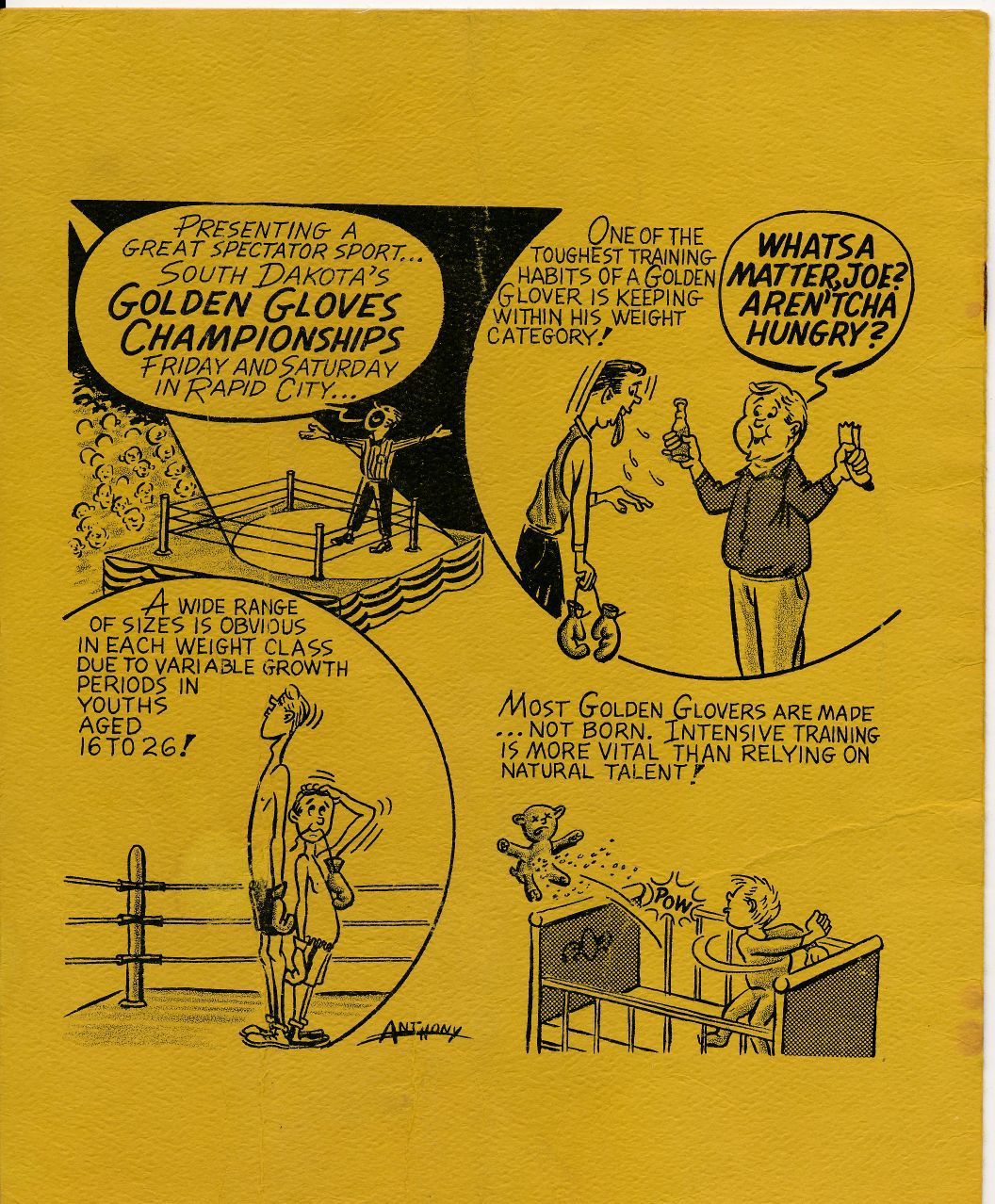 The back of the 1969 Golden Gloves Tournament program.

BEULAH, WYO. | The Parkinson’s has left him a bit punch-drunk these days. And the bone cancer has taken its toll. But Dan Island is still praising the Lord as he ducks beneath the ropes and heads into the ring for his final round in life.

At times a pugilist, entrepreneur, outlaw and evangelist, the 70-year-old Island has lived the kind of life that inspires moviemakers. Filled with tragedy and comedy in equal measure, of jail stints and Jesus Christ, his is a story of a man well-loved and a life well-lived.

As that life nears its inevitable end, Island’s friends are flocking together to express their admiration for a guy who once served time in prison before serving the Lord. In so doing, he changed hundreds of lives — from the homeless and downtrodden to the battered and abused.

Time and illness have slowed the movement and speech of the father of four daughters, grandfather of five and great-grandfather of four. But of all he overcame and everything he accomplished, Island said this week that he is most proud of a special relationship he fostered in midlife.

Long before Island was attracted to the light of the Lord, he took to the ring. A 1963 Rapid City High School graduate, he began boxing early — and with some success. With a wicked right, he became Golden Gloves Midwest Champ, traveling to Omaha and Chicago for matches.

“At that time, he was probably the best boxer in South Dakota,” said lifelong friend Jack Knodell. When Knodell decided he might like to try the sport, Island served as his mentor and coached him to seven Golden Gloves titles. Island also guided a Black Hills team to a state championship in the early '70s.

Knodell said that Island was never one to look for a fight, but the two used their boxing skills, honed over hours punching a heavy bag and in myriad matches, to their advantage outside the ring.

“In the wilder years, we covered a lot of territory, and we cleaned out a few bars,” Knodell said. “We were in a bar in Martin at 8 a.m. one morning, drinking beers, when (a local resident) kicked Dan’s dog. Dan asked, 'Why’d you do that?’ and the guy said a dog didn’t belong in a bar. Well, the fight was on, and the two of us mopped the floor with these five guys. Somebody broke a beer bottle over my head, and blood was running everywhere. Of course, we ended up in front of a judge.”

In 1972, Island started Dan’s Back Porch and B&B Lounge in Spearfish, a bar that still operates today. While drinks were being served downstairs, ambitious boxers trained upstairs.

“All the time I ran around with him and worked for him, it always seemed Dan had such a sharp mind, and he seemed to have a golden touch,” said Ron Underhill, who started as a bartender at the Back Porch, then served as bar manager until Island sold the joint in 1983. “Whatever he got involved in, it seemed to flourish.”

From 1976 to 1984, Island staged the Redwater Revival, an event that started as a weekend kegger at his Beulah, Wyo., ranch, then evolved into a full-blown music festival. Held on the banks of Redwater Creek, former Red Willow Band member Hank Harris, whose group played the Back Porch and the annual festival, said they were memorable.

“These were mini-Woodstocks,” he said. “It was all about peace and love and rock 'n' roll.”

Red Willow, which was often the headliner, generally didn’t take the stage until 2:30 in the morning, Harris said. He credited Island with creating music venues and a festival at which local bands wanted to perform.

“He was one of those guys who treated his bands well, and he always paid well,” Harris said. “Dan was a man of huge charisma. If he had had a bent toward politics, he could have been governor. He just had that personality that would fill a room.”

But, as a sign of the times, friends say Island and his brother, Frank, were caught up in a dark underworld of biker gangs and drug dealing that eventually would spell their demise.

On Sept. 25, 1986, the two brothers were among 13 people indicted by a Rapid City grand jury on federal drug charges involving cocaine, methamphetamine and marijuana. The indictments and the investigation involving the FBI, the IRS, local and state law enforcement agencies and a federal drug task force weren’t announced until late October. By that time, Dan Island had fled the area.

Island remained on the run for a year and a half, reportedly hiding out in Kansas and Oklahoma motels, where some of his friends would send him money and occasionally visit.

“I kept in contact with him, got money to him and even took Bush, his bulldog, to him,” said Knodell, who also served time in prison on drug-related charges.

Childhood friend Lee Madison, a retired firefighter, said he also stayed in touch with Island, but after one phone conversation, he got a big surprise.

“One day I got a visit from the FBI at work, because they had traced his phone call to me,” Madison recalled this week. “I spilled my guts.”

On one visit to Tulsa, Knodell saw Island was reading the Bible and attending church on a regular basis. Eventually, that Christian faith gave Island the strength to return to Rapid City where he turned himself in to authorities in 1988.

Island was released from prison in 1994 and returned to the Black Hills. When he eventually found his freedom, Madison was there to pick him up because, he said, even with all his troubles, he regarded Island as one of his closest friends.

“A man will only count his real friends on one hand and, for me, Dan was one of those guys,” Madison said. “He’s just an exceptional guy. And, when he got out of prison, he was a changed man. He had found the Lord. It was a complete reversal. No longer did you cuss or use the Lord’s name in vain in front of Dan.”

In the mid-1990s, Island learned about a potential job that might be right up his alley. He called Knodell and told him to check out the Cornerstone Rescue Mission, because it was in search of a director and there also might be a job in it for Knodell.

“I got down there and gave him a call and said, 'Don’t bother. It’s filthy. It’s an upside-down mess,'” Knodell recalled. “He came anyway.”

Island moved into the building for several months, established rules, and when funds proved inadequate, first he prayed, then he called the Rapid City Journal and told its editors the town’s lone homeless shelter would soon be closing its doors if donations weren’t forthcoming.

“The money started coming in and Dan made rules for clients, made them make their beds so it looked neat and shiny when they brought people through,” Knodell said. “Between the two of us, we cleaned it up and got the Mission back on its feet.”

Island would stay nearly a decade before ongoing prostate issues caused him to resign in December 2005. Meanwhile, Knodell would serve as a supervisor for 17 years. During his tenure, Island realized clients needed more than a bed — they needed hope for the future. So, he established the Cornerstone Thrift Store to generate funds and give the homeless jobs.

Island also is credited with a women’s and children’s shelter, a wood-cutting business, a foundation, and installing an elevator at the Mission that provided wheelchair access to its basement dining room and upstairs dorm rooms.

“I think how he took the Mission from a mere soup kitchen with a hand-to-mouth budget, expanded it to a true mission with apartments, a thrift center, a VA center, and a women and children’s center,” said Rod Schlauger, a local attorney who served on the Cornerstone's board from 1992 to 2011. “Dan was an example of what we wanted for all the clients — a chance to turn their lives around.”

Jim Castleberry, the man Island made his assistant director even though Castleberry said he couldn’t afford to take the job, eventually assumed the mantel when Island stepped down. He stayed on as executive director through 2014 and is still on the Cornerstone’s board.

“I don’t think we’ve had anyone before or since with Dan’s sense of hospitality and compassion,” Castleberry said this week from Arizona. “… Dan will leave a spirit and a legacy behind that’s almost irreplaceable. We’ll soon lose his presence in the physical. But we won’t lose his spirit or his impact on the ministry or the Cornerstone. It’s embedded in the fiber of what we do.”

Friends of Dan Island will gather Monday at the Sand Creek Trading Post for a celebration of a special man who touched many lives.

The Redwater Revival Revisited starts at 1 p.m. at the establishment commonly known as the Beulah Bar. Those donating items for the silent auction are encouraged to drop them off between 11 a.m. and 1 p.m., when the soiree gets underway with free brats, burgers and salad, and music from some of Island’s top performers from the past.

“It’d be so nice if my uncle Dan has a big smile on his face all day, because he has been getting depressed lately,” said Monica Island-Moss, Island’s niece and caregiver. “He’ll be happy to see his friends.”

BEULAH, WYO. | Friends of Dan Island will gather Monday at the Sand Creek Trading Post for a celebration of a special man who touched many lives.

Dan Island poses with two of his daughters, Cathy, left, and Judith, right, as well as his grandson, Alex, in this recent photo.

Dan Island, front row center, holds the trophy he won in the 1969 Golden Gloves Tournament in Rapid City. Island later became a coach and led a Rapid City team to the state championship.

Always the sportsman, Dan Island poses with two hunting dogs and the pheasant he bagged on a fall hunt.

The back of the 1969 Golden Gloves Tournament program.