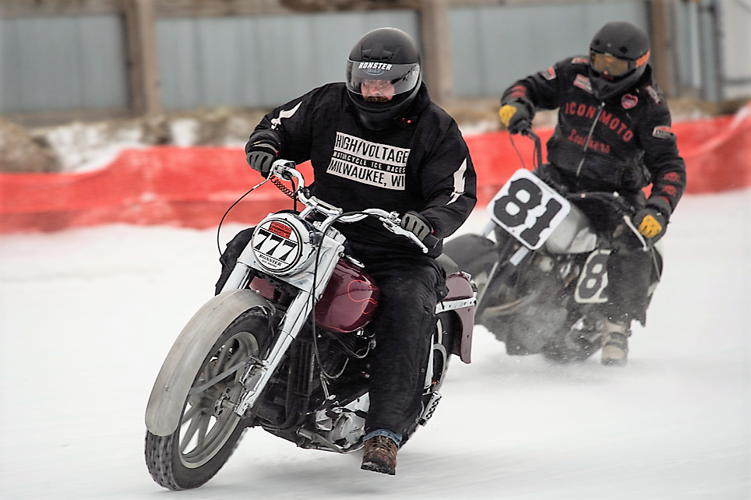 Ron "Ronster" Brefka, riding the No. 777, died Wednesday from injuries suffered in a racing accident Tuesday night in Sturgis. He organized and participated in ice racing events near his home in Milwaukee and was the owner of 7 Metal West, fabricator of custom fenders and other motorcycle parts. 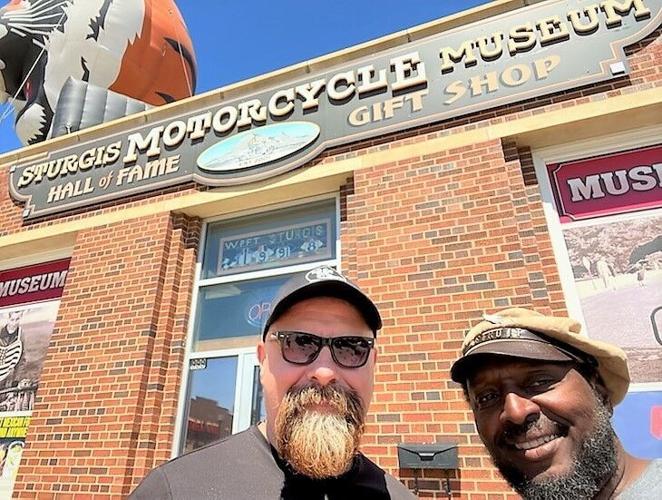 Ron "Ronster" Brefka, 59, left, of Milwaukee, and Randy B. "Detroit" Hayward of Detroit pose in front of the Sturgis Motorcycle Museum and Hall of Fame earlier this week. 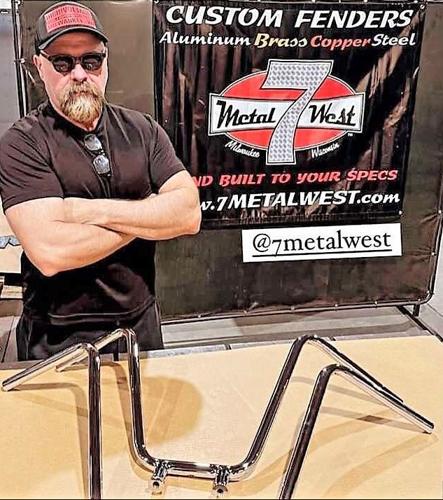 He didn’t let the odds keep him from the sustenance of freedom of the open road, from helping others, or spending time with a legion of friends, made over decades on a motorcycle.

A friend and fellow racer said Brefka, 59, of Milwaukee, was making the most of life when he entered a spectator race at the Flat Out Friday Hooligan Race finals, hosted by the Jackpine Gypsies Motorcycle Club Tuesday night at the J.C. “Pappy” Hoel Short Track in Sturgis.

“I’ve since found out that all Ron talked about was having the opportunity to run at the Jackpine Gypsies,” said Randy B. Hayward, known as “Detroit.”

Sliding through a corner on the hard-packed dirt oval on the sixth-mile, Brefka’s No. 777 Harley-Davidson Shovelhead caught and flipped, throwing Brefka from the bike in what racers call a “high-side” crash.

Rules required helmets and other safety equipment, but Brefka suffered a traumatic brain injury from impact with the track surface, Hayward said.

He was taken by ambulance to Monument Health's Rapid City Hospital, where he died Wednesday morning.

“Flat out Friday is saddened and shaken by the passing of Ron ‘Ronster’ Brefka, who was injured in an on-track incident last night in Sturgis, South Dakota. He was a fellow Milwaukeean, race promoter, racer, and a friend.

"We are going dark and pausing social media while we reflect on what Ron brought to our lives and the numerous threads he wove into our motorcycle community.

"Appreciate your loved ones and let them know what they mean to you. Take care of your friends and savor the time you have together. Hug your racers before they go out on the track. Godspeed, Ron,” the post stated.

Other friends recall “Ronster” as a man who loved every aspect of motorcycling to his core, and turned simple philanthropy into an art form.

He also organized and participated in winter ice races in the Milwaukee area, fabricated custom metal fenders for bikes through his 7 Metal West company and he would go out of his way to assist young builders with their bikes.

“A lot of times he would wouldn’t charge them. He’d pay out of his own pocket,” said Dan “Cabana Dan” Rognsvoog of Sturgis.

All proceeds from ice races, bike shows and other fundraisers he hosted went to the We Care Fund for cancer research at the Medical College of Wisconsin, said another friend, Michelle Perez of Milwaukee.

Perez said Brefka also supported women riders throughout the Milwaukee area, encouraging her to ice-race for the first time last winter, where she placed second in a women’s class event.

“You know, he was always like our No. 1 fan,” Perez said. “He was just very supportive.”

Brefka’s two-wheeled passion never wavered in the face of his own battle with cancer.

In 2016, he was diagnosed with acinar cell pancreatic carcinoma, a rare form of cancer affecting only about 5% of those diagnosed.

Surgery to remove most of his pancreas, spleen and lymph nodes, followed by arduous rounds of chemotherapy and radiation, appeared to keep the disease at bay for four years.

But in 2020, blood tests showed the cancer had returned to his liver. A second surgery cost him a portion of his liver and his gallbladder.

Perez said Brefka had undergone another surgery earlier this year, but was back on his bike within a couple months.

“He has probably raced a couple times since his most recent medical procedure,” she said.

Rognsvoog and his wife, Sturgis Motorcycle Museum Director Leah Whaley, had hosted Brefka and other friends as guests since moving to Sturgis in 2016.

“We have just a good mix of people and he’d always have some type of crazy story that would make everybody laugh, just an all-around good guy,” Rognsvoog said.

Whaley said Brefka and Hayward had enjoyed a lasagna dinner with the other guests before they headed to the races Tuesday night.

“He was an incredibly kind, generous person who loved the sport of motorcycling and everything about it,” she said.

“He loved racing, antique bikes, the sport, the culture, the people, the stories. He was just quintessentially motorcycling,” she said.

“Ron will now be known as a legend. He was just huge in the motorcycle community, especially in Milwaukee, but he had followers from all over the world,” said Perez. “He had an impact on a lot of people.”

Perez said the High Voltage Vintage Motorcycle and Chopper Show will forge on this fall in memory of “Ronster,” who lived with his 97-year-old mother in Milwaukee.

One lasting image, Whaley said, is that of a photo taken of Brefka in the first turn, first lap of Tuesday night races. She is having the photo enlarged.

“You can see the smile on his face from ear-to-ear,” she said. “It sounds trite, but he was doing what he loved.”

There have been no reports of injuries in a Saturday morning shooting, according to the Rapid City Police Department.

The state Department of Public Safety identified a 50-year-old Box Elder man as the person who died last week in a two-vehicle crash.

South Dakota Gov. Kristi Noem was returning from an official appearance in Rapid City in 2019 when she faced a decision: Overnight in the capi…

Your Two Cents for Sept. 27

Once the federal government sends the reservations in South Dakota $5.4 million to fight opioid addiction, do they ever have a deep research t…

Ron "Ronster" Brefka, riding the No. 777, died Wednesday from injuries suffered in a racing accident Tuesday night in Sturgis. He organized and participated in ice racing events near his home in Milwaukee and was the owner of 7 Metal West, fabricator of custom fenders and other motorcycle parts.

Ron "Ronster" Brefka, 59, left, of Milwaukee, and Randy B. "Detroit" Hayward of Detroit pose in front of the Sturgis Motorcycle Museum and Hall of Fame earlier this week.