Rapid City Mayor Steve Allender joined in signing a letter with 15 other mayors of South Dakota’s most populous cities Friday asking residents to wear a mask when physical distancing cannot be maintained but resisted calls from local health care workers to issue a mask mandate earlier this week.

Allender had received a letter from several medical staff members at Monument Health Rapid City Hospital by Tuesday expressing their support and encouragement of an ordinance requiring masks in indoor public places, businesses and mass gatherings.

The group had been asked by Rapid City Council President Laura Armstrong and Dr. Marvin Buehner to give a medical opinion on mask mandates. 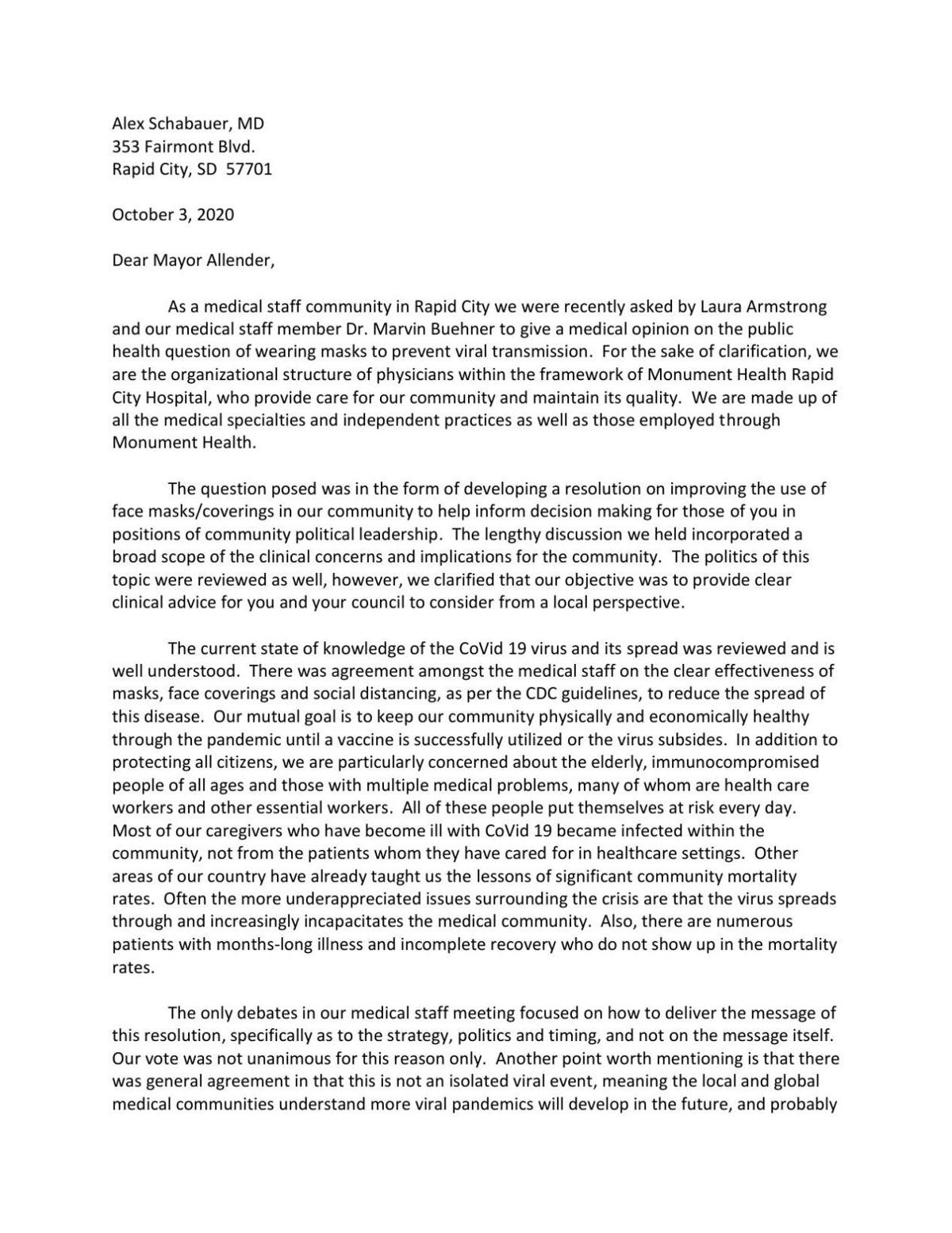 “There was agreement amongst the medical staff on the clear effectiveness of masks, face coverings and social distancing, as per the CDC guidelines, to reduce the spread of this disease,” as stated in an Oct. 3 letter from the group written by chief of staff Dr. Alex Schabauer.

The group expressed concerns in the letter about protecting the elderly, immunocompromised, those with multiple medical problems as well as health care workers and essential workers as reason for a mask mandate.

Rapid City has been subject to a significant rise in the incidence of coronavirus infection, a Sept. 29 resolution attached to the letter stated.

Allender said Tuesday that he had seen the letter and resolution but did not make any mention of moving the group’s urges for a mask mandate forward. He said the city and city council are divided on the issue, and that it would be difficult to enforce.

To enact a mask mandate would require usage of a “very vague, 100-year old statute that gives municipalities the ability to protect against the spread of disease,” he said.

It’s possible the Legislature would revoke that state law in the session in January, Allender said.

“There’s a wholesale misunderstanding of the effectiveness of face coverings,” he said Tuesday.

According to the CDC, masks provide a simple barrier to prevent someone’s spit or respiratory droplets from traveling into the air and onto others, but as the AP reports, the benefits of wearing a mask for personal protection are unclear.

“You rely on others wearing a mask to keep you safe,” he said.

Biden: 'Prepared to compromise' on infrastructure

Biden: 'Prepared to compromise' on infrastructure

Women's sports coalition started by Gov. Noem under fire for misuse of images