SpaceX rocket ship blasts off into orbit with 2 Americans

The latest quarterly reports to the Federal Election Commission show that U.S. Sen. John Thune, R-South Dakota, has a bigger balance in his campaign account than any other member of Congress.

Thune’s balance is $12,525,824. The next highest is $10.79 million held by the campaign account of Sen. John Cornyn, R-Texas, according to a chart published by the Center for Responsive Politics.

Thune won election to the Senate in 2004. In the 16 years since then, he has steadily raised campaign money without having to spend much of it. Nobody ran against him in 2010, and he cruised to re-election in 2016 against a Democratic opponent who raised only $70,500. Thune won’t face re-election again until 2022. 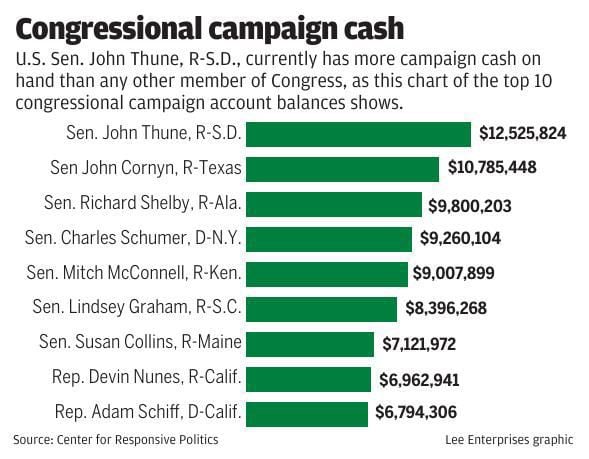 For some perspective on how much money Thune has in his campaign account, consider this:

Sen. Mike Rounds and Rep. Dusty Johnson, both South Dakota Republicans, have big advantages over their prospective 2020 challengers in fundrai…

Pelosi orders impeachment probe: 'No one is above the law'

The “buffalo” listed as an ingredient in some foods marketed for people and pets is actually from water buffaloes, not bison, according to sup…

PIERRE | Less than two weeks after the country was rocked by two back-to-back mass shootings — first in El Paso, Texas, then in Dayton, Ohio, …

PIERRE | As debate on immigration reaches a fever pitch on national stages, White House podiums and family dinner tables, the Dakotas remain i…