Every time the Hill City volleyball team squared off with Belle Fourche this season, they did so with a different head coach.

After the Rangers first beat the Broncs, in straight sets, Lindsy Wathen resigned, leaving athletic director Wade Ginsbach to serve as interim coach while they searched for a replacement. Ginsbach guided them to a four-set win over their Black Hills Conference foe in their regular season finale.

The reins were then handed over to Renae Schneider, who in just her second match led them to a dominant victory over Belle Fourche in the Region 8A final to secure a second straight spot in the Class A SoDak 16.

“I don’t know that that’s ever happened in South Dakota history,” Schneider said of the cycle of coaches.

It’s been a whirlwind of a season for Hill City, or rather a whirlwind of the last month, but despite the carousel of coaches, the resilient group of girls have navigated the rocky course and ended up back in the Class A State Tournament for the second consecutive year and just the second time ever.

Members of the Rangers echoed their teammates’ sentiments on what got them through this unexpected adversity: each other.

“What happened didn’t slow us down one bit, I don’t think,” sophomore Maggie Taylor said. “It made us a stronger team and got us where we needed to be, even though that’s not how anyone expected us to get there.”

News broke on Oct. 19 that Hill City head coach Lindsy Wathen, who guided the program to its maiden state tournament berth in 2020, had resigned sometime prior for still undisclosed reasons and removed two of her daughters from the team. With the majority of their regular-season schedule completed and the postseason only two weeks away, much remained up in the air regarding the future of the Rangers' volleyball squad.

“There were some really hard days or confusing days where we didn’t know what was going to happen,” senior Whitney Edwards said. “But we all just came together and decided we wanted to play still.”

Edwards said a meeting was held following Wathen’s departure where Hill City High School administration left it up to the now 12 players to decide what to do, now without a head coach, with shutting down the season a possibility.

Despite the unprecedented events they had endured and various unknowns ahead of them, Edwards said stopping just couldn’t be an option, and collectively they chose to keep going.

“We were like, we’re just here to play volleyball and have a ton of fun together, so from those practices forward we really had to push each other because we didn’t have our head coach there to coach us,” she said. “We could either just dwell on this or try to move forward and make the most of what we have left, which is some really good talent, and so that’s what we decided to do.”

During this time of uncertainty, Edwards and her fellow seniors organized practices, and by doing so, she said, the team learned more than ever to hold each other accountable, because there was no head coach to do so.

“We always bounced off everybody, and everybody was there for everybody. It was basically the team that had each others’ backs,” junior Karsen Kirsch said. “You never know what may happen, so just rely on your team and who you have in life. That’s really who’s there for you.”

The Rangers continued with their slate of matches as Ginsbach stepped in, and other than a pair of losses in best-of-three sets contests to Nebraska schools in a tournament in the Cornhusker State, they continued to win.

As part of Hill City’s decision to progress with its campaign, a search began to find a replacement head coach, but already two months into the season, pickings were slim.

“Of course, it’s very hard this late in the season to have somebody come and practice at 3 o’clock and get off work,” Ginsbach said. “So, it was a process.”

Schneider was initially brought in to assist Ginsbach with volleyball-related elements like rotations and substitutions, but she eventually took over the squad and coached them to her inaugural win in a straight-sets victory over Lead-Deadwood in the first round of the Region 8A Tournament.

Schneider spent a decade as head coach of Custer. She has also coached basketball and served the South Dakota High School Activities Association as a referee. Her daughter, Marlee, was All-Conference at Rapid City Stevens and helped lead the Raiders to a state championship in 2018 before taking her talents to the University of Sioux Falls, where she is now a senior.

“I knew what had happened and the situation, and thought that’s what was best for the kids,” she said. “I had been around these kids, and I had (refereed) enough Hill City games to know who they are and how they played. I knew that they needed somebody, somebody volleyball sense-wise, to help them.”

Edwards said she and her teammates have grown fond of Schneider with her willingness to prepare them as best as she can.

“She’s been super generous with her time and what she’s putting into us, and how committed she is because she’s constantly watching film and sending us scouting reports,” Edwards said. “We really appreciate her.”

Schneider is not the permanent answer in the Heart of the Hills, however, as she plans to depart the program following the end of the state tournament. Still, Ginsbach said, she’ll nevertheless have an impact.

“It’s very beneficial for the girls. Her knowledge of the game and her ability to see and adjust and game plan is top-notch,” he said. “She’s not coming in trying to change anything. She comes in and just tries to help and modify, and get these girls where they need to be.”

Since Schneider began, the Rangers have yet to drop a set and are winning frames by an average of 11.3 points, including three sets where they surrendered less than 10.

Those performances culminated in a 25-9, 25-17, 25-17 victory over Winner in the Class A SoDak 16 to advance to the Class A State Tournament, being held Thursday through Saturday at Summit Arena.

They celebrated by mobbing each other on the floor following match point, and Taylor displaying the SoDak 16 trophy high above her head for a packed Hill City crowd.

“It was crazy. It was so much fun,” Taylor said. “It was definitely a really big accomplishment of ours, and it definitely made it sweeter than just winning it in a normal season.”

When adversity hit them, they overcame, and the payoff of reaching the same place they were a year ago under more challenging circumstances was that much more satisfying.

“It just showed how strong a team our age can be and how much it can mean in certain situations,” Taylor said. “But overall we grew as a team, it made us even more hungry to win and we just want to be good people.” 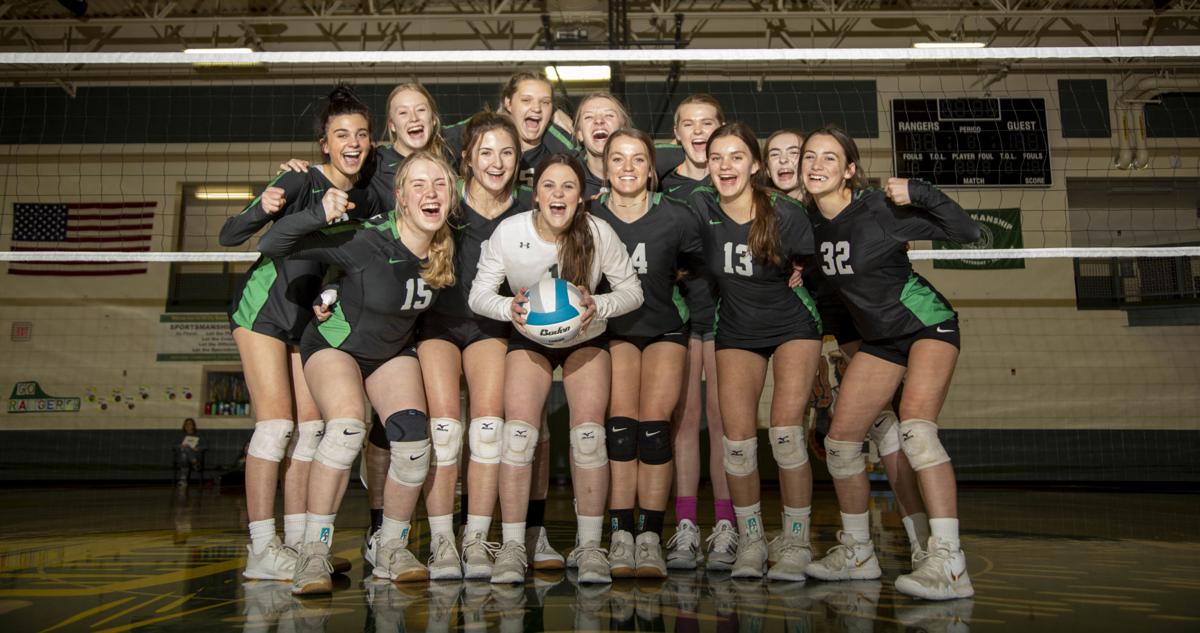 The Hill City volleyball team will face Wagner in the first round of the Class A State Volleyball Tournament on Thursday at Summit Arena. 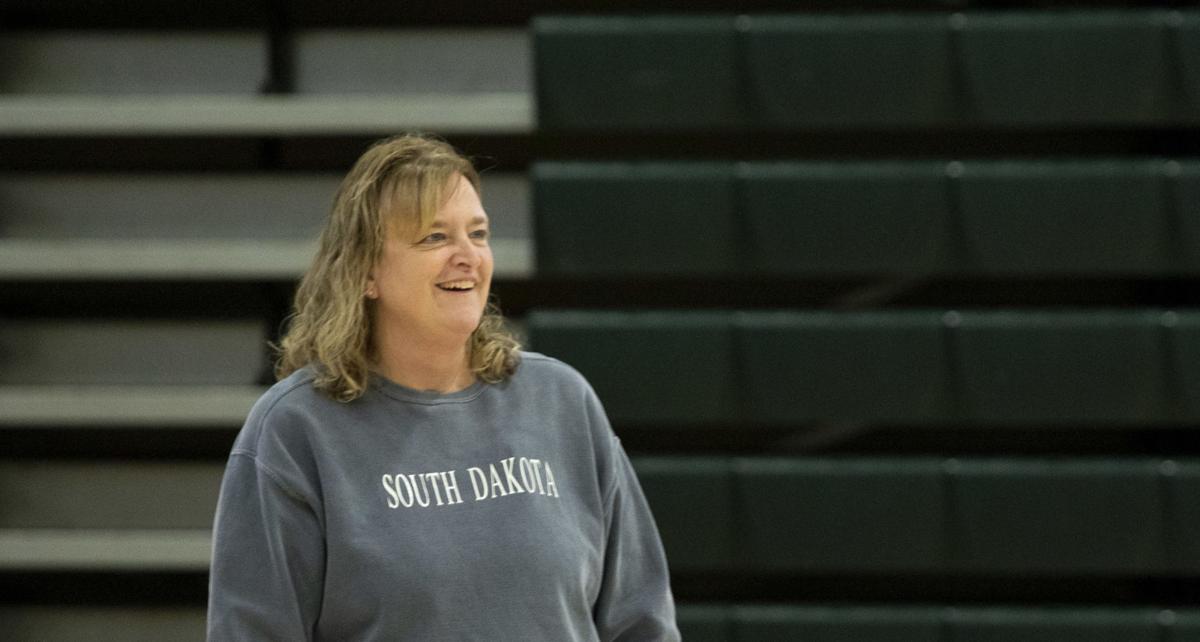 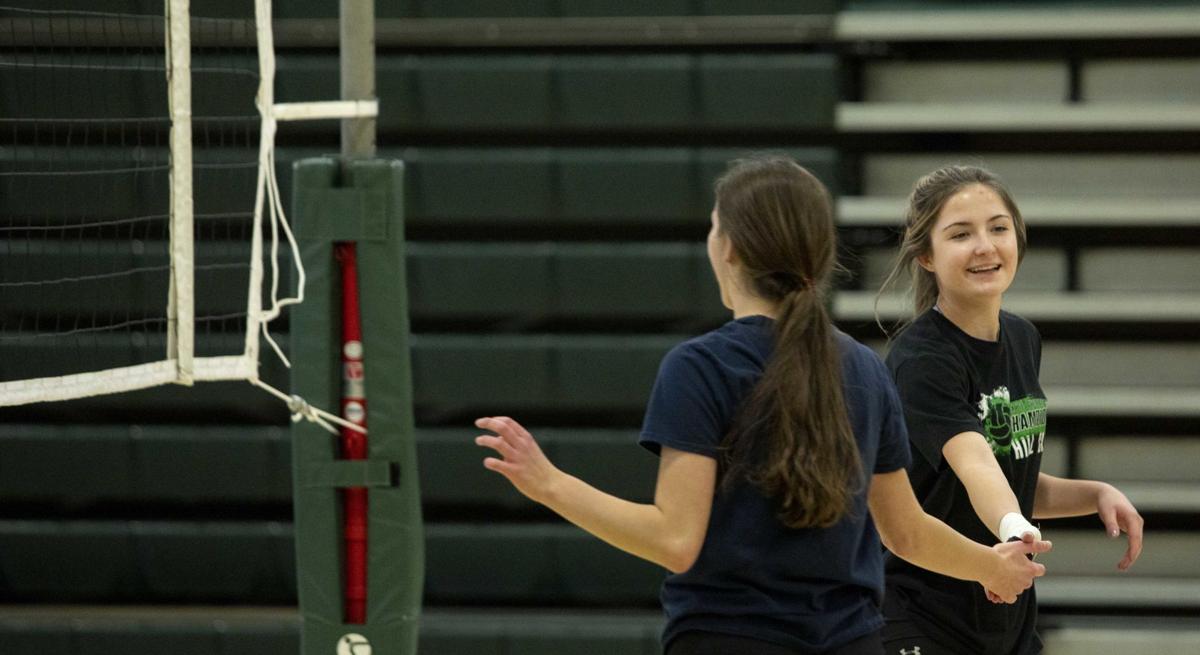 Hill City's Marie Peckosh celebrates a hit with a teammate during practice. 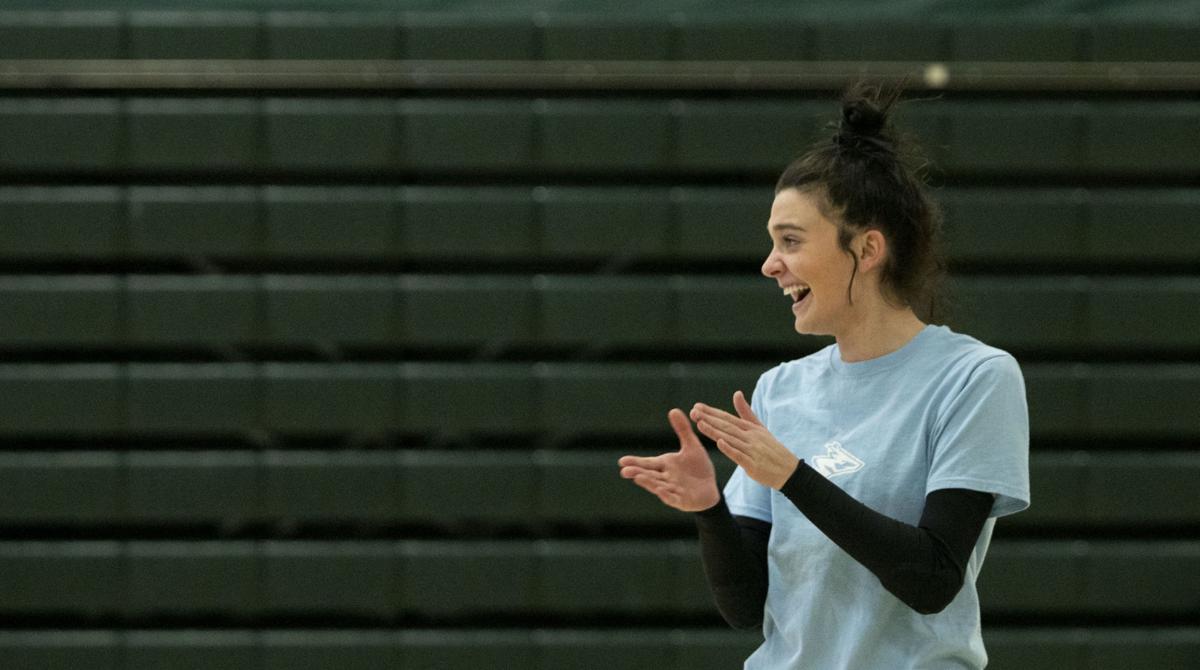 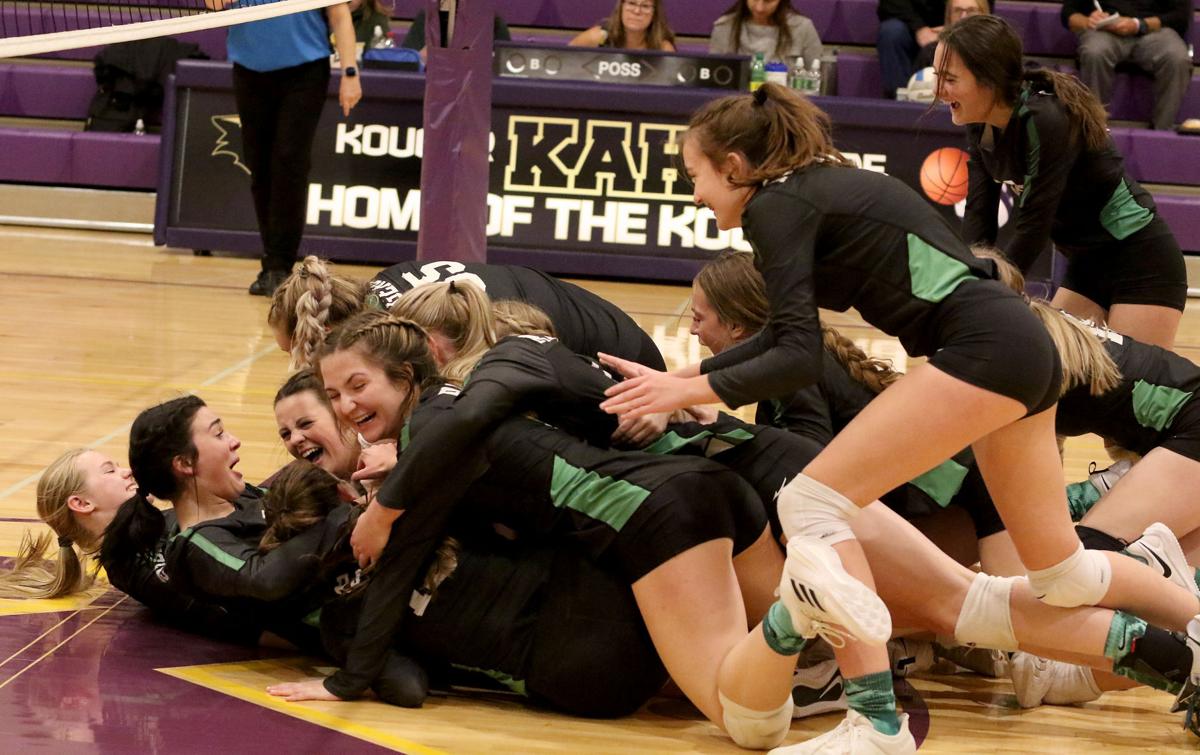 The Hill City volleyball team celebrates its victory over Winner in the Class A SoDak 16 on Nov. 9 in Kadoka. 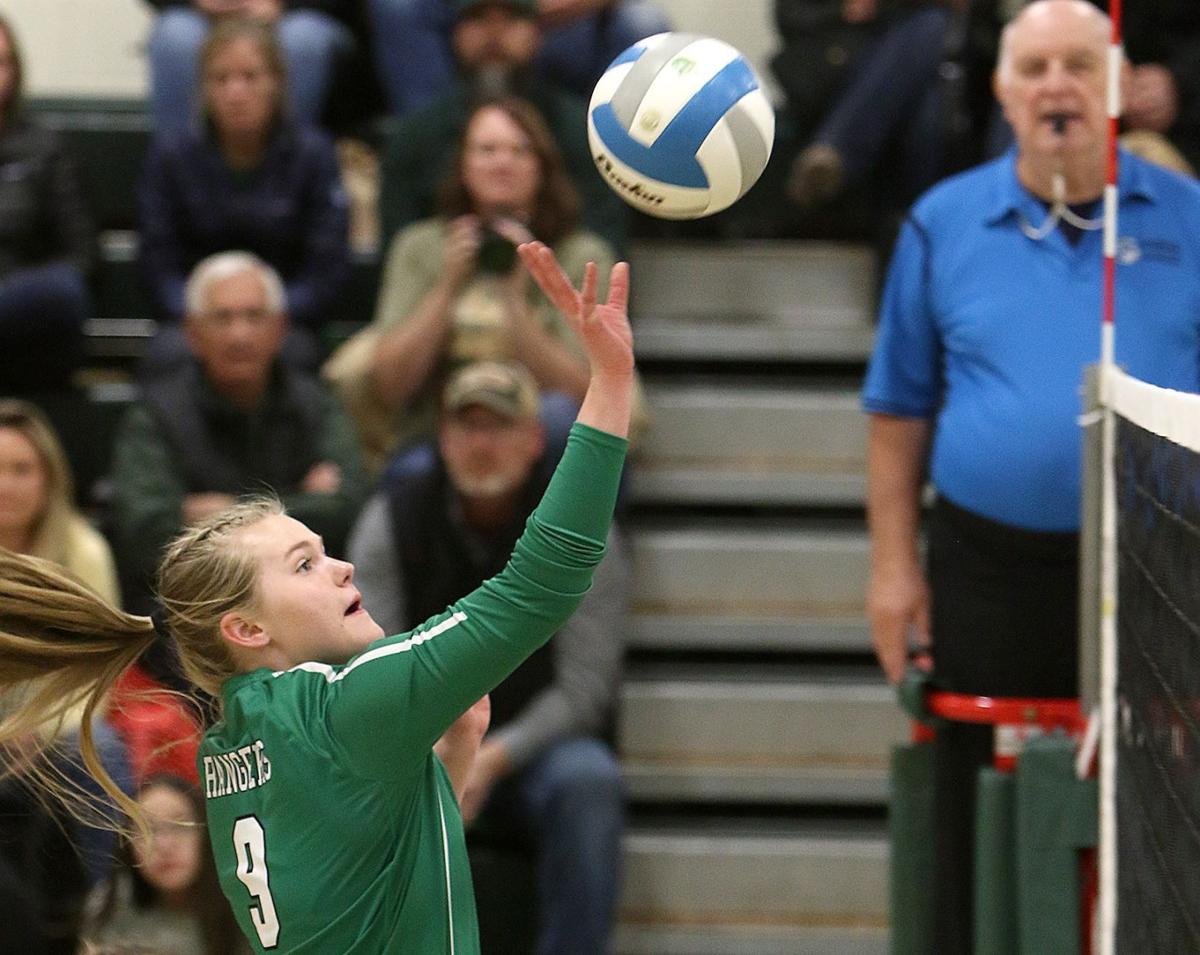 Hill City middle hitter Whitney Edwards (9) tips the ball over the net for a point during the Rangers' three-set win over Lead-Deadwood on Nov. 2 in the opening round of the Region 8A volleyball tournament in Hill City.