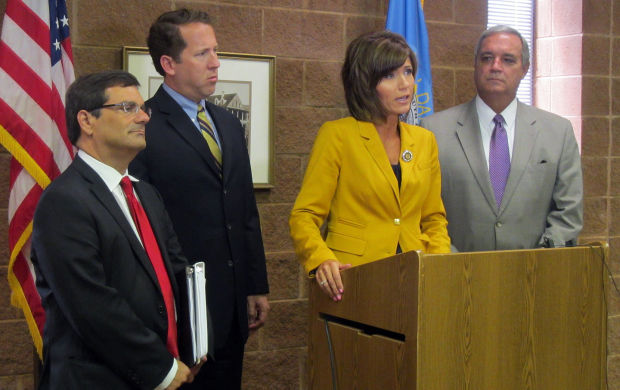 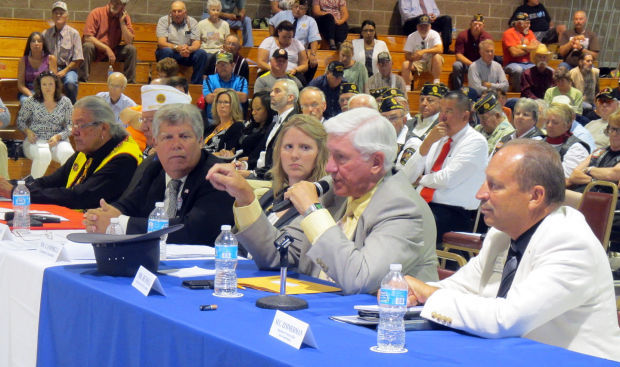 Save the VA Co-Chairman Pat Russell, gray suit, addresses members of the House Veterans Affairs Committee during a hearing at the Mueller Civic Center in Hot Springs. Appearing in support of preserving services in Hot Springs were, from the left, Oglala Sioux Tribe President Bryan Brewer; S.D. American Legion Commander Tim Jurgens; Bob Nelson, co-chairman of Save the VA; Amanda Campbell of Save the VA; Russell; and S.D. Secretary of Veterans Affairs Larry Zimmerman.

HOT SPRINGS | In the battle to keep the Veterans Affairs Hospital open, the local Save the VA committee won a valuable friend at a Thursday Congressional hearing here.

"I can assure you that (U.S. Rep) Kristi Noem and the delegation has gained at least one, if not two, allies to try to come up with a solution," said U.S. Rep. Jeff Miller, R-Fla., chairman of the House Veterans Affairs Committee, after the hearing.

"What a beautiful and wonderful historic facility," Miller said. "This community and that facility have a historic past of taking care of those that have worn the uniform of this nation, and it is our hope that some way, somehow, we'll to find a way to continue that historic history that is held within the walls of that magnificent structure."

For Miller, the day started on a high note. Before the hearing, the committee members toured the hospital, which has served veterans for 107 years. Photos do not do the historic campus justice, Miller said.

Miller's enthusiasm for the campus and the interest Bilirakis and Smith expressed were encouraging, according to South Dakota American Legion Commander Tim Jurgens of Milbank. Noem has advocated for the continuation of services ever since the Veterans Affairs announced its intentions to realign the Black Hills Health Care System and reduce services in Hot Springs.

"It's very clear that the representatives also want to keep that hospital facility open," Jurgens said. "I think we all came away encouraged by what went on today."

Appearing before the committee to advocate for the continuation and upgrading of services in Hot Springs were Jurgens; President Bryan Brewer of the Oglala Sioux Tribe; South Dakota Secretary of Veterans Affairs Larry Zimmerman; and Save the VA Committee members Bob Nelson, Pat Russell and Amanda Campbell.

Campbell asked for the immediate removal of DiStasio.

"What has happened in Washington, D.C., in the last few months is exactly what needs to happen in the Black Hills," Campbell said, accusing the officials of negligent management, a lack of integrity, poor and manipulated data, bad decisions based on the poor data and agency inertia. Her comments drew a resounding cheer from the crowd that filled the Mueller Center.

Each of the four committee members had the opportunity to question DiStasio and Julius, who frequently said they did not have the requested information with them.

In a press conference after the hearing, Miller conceded that it was difficult to get a straight answer out of DiStasio. Miller even referred to the VA audit that concluded schedulers for the Black Hills system were told to list shorter-than-actual waiting times for appointments requested by veterans.

That internal audit points to poor leadership, Noem and Miller made an emphatic point that leadership needs to be held accountable.

The VA officials’ lack of preparation surprised and disturbed Noem. When asked pointed questions about such matters as patient numbers, Native American veterans served and costs to refurbish the facility, DiStasio and Julius often waffled before promising to “get back to the committee” with the information they did not have with them.

“Frankly, I am offended that Black Hills Health Care didn’t bring the numbers with them. They had nothing to show,” Noem said after the hearing. “Save the VA had all its data and answered every question asked them."

Many of Smith's constituents rely on the Hot Springs facility for their health care. Smith said it is disturbing that veterans' objections to reducing services in Hot Springs and moving many of those services to Rapid City are not being heard. Major decisions are being made using data that is skewed, he said.

"The proposal simply does not make sense," Smith said.

Save the VA Co-Chairman Pat Russell, gray suit, addresses members of the House Veterans Affairs Committee during a hearing at the Mueller Civic Center in Hot Springs. Appearing in support of preserving services in Hot Springs were, from the left, Oglala Sioux Tribe President Bryan Brewer; S.D. American Legion Commander Tim Jurgens; Bob Nelson, co-chairman of Save the VA; Amanda Campbell of Save the VA; Russell; and S.D. Secretary of Veterans Affairs Larry Zimmerman.