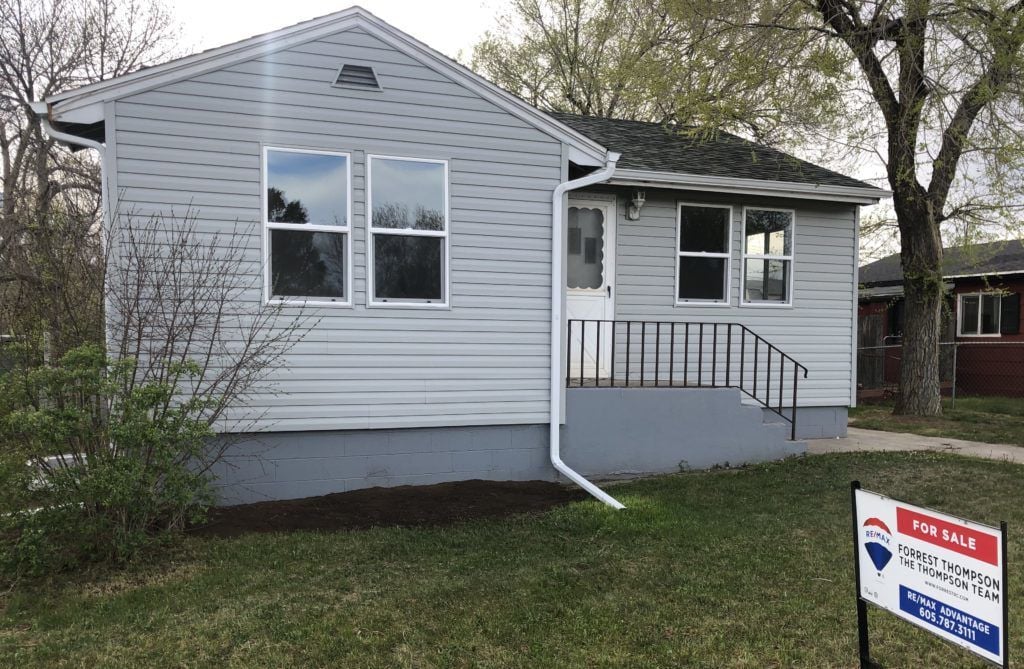 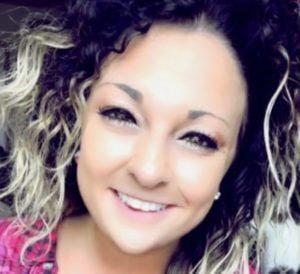 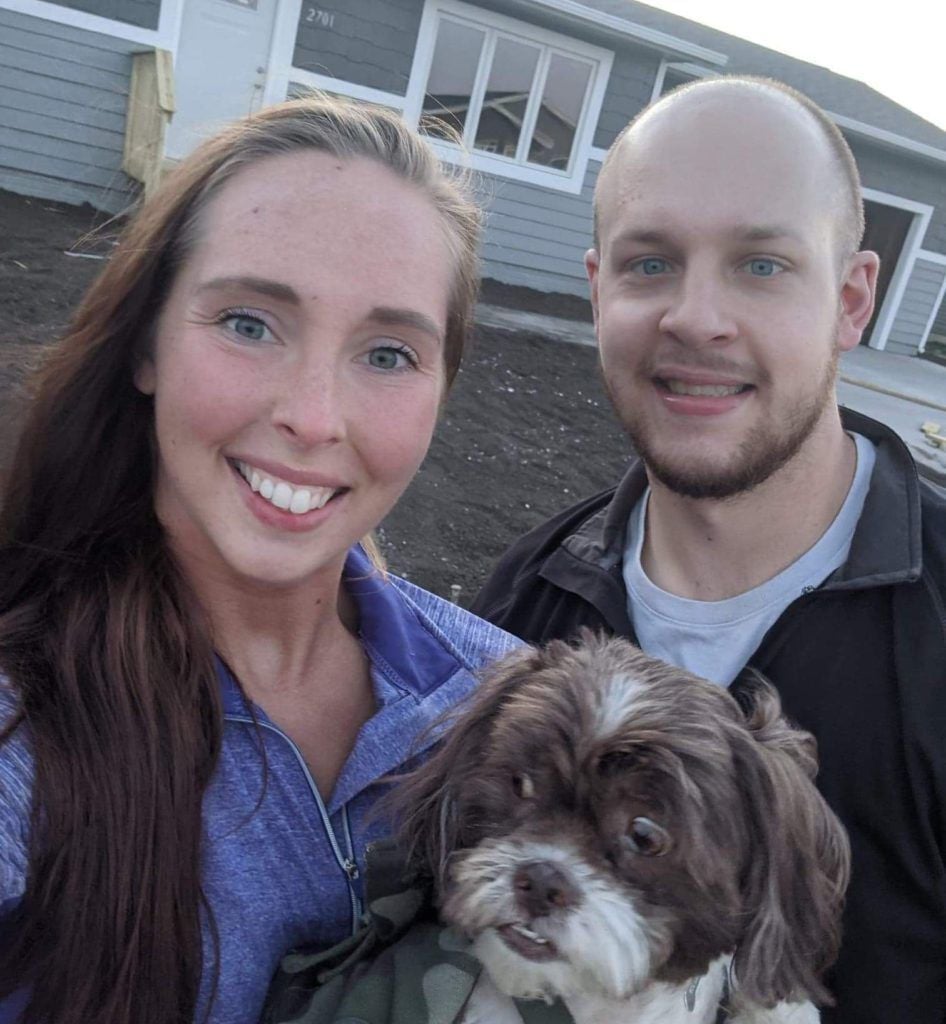 Macy Trautman and her boyfriend, Adam Christensen, were finally able to purchase a house in Sioux Falls after being outbid on three different houses. 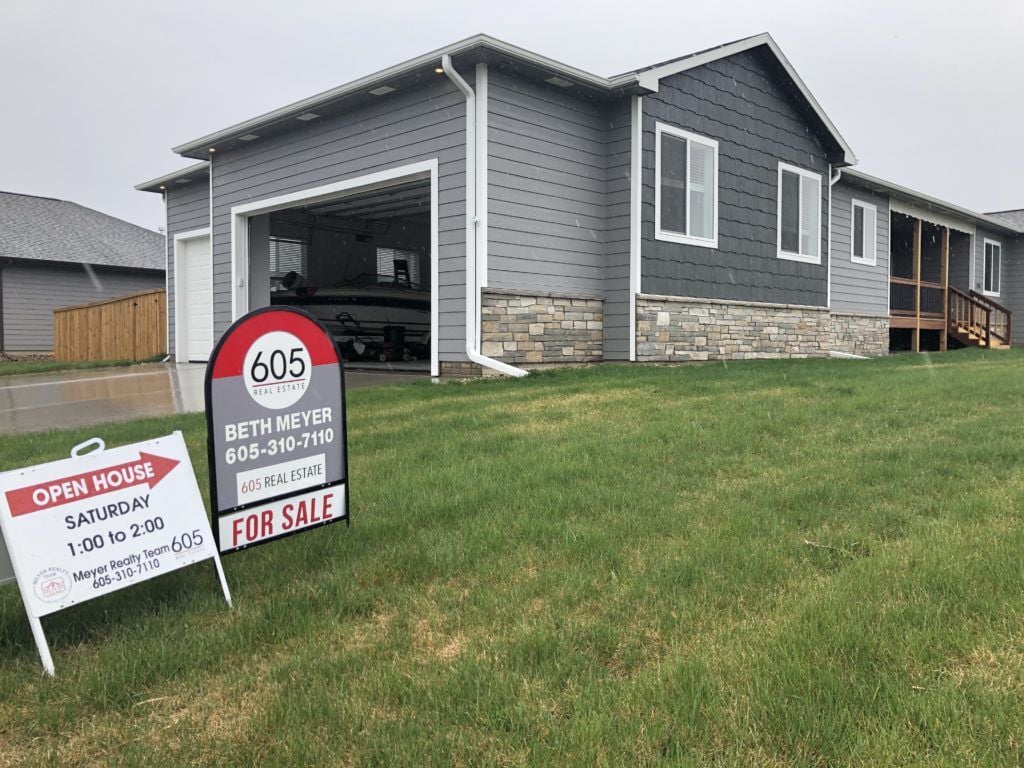 This home for sale in northern Sioux Falls was priced at $470,000 in early May. Open houses for homes in the $200,000 price range have drawn dozens of potential buyers amid a seller's market with low inventory.

Historically low interest rates, out-of-staters, limited inventory and higher construction prices for new homes have made for a frenzied housing market that has put homeownership further out of reach for some South Dakota residents.

The competitive housing market is leading to a range of outcomes often seen in coastal states but rarely in South Dakota.

First-time homebuyers or those looking for properties at an affordable price have found themselves in bidding wars with others willing to pay $20,000 to $60,000 above a list price. Offer prices are being driven up by high demand from out-of-state residents moving to South Dakota for work, the lifestyle or because they approve of how the state operated during the pandemic. Some South Dakota homes are selling in less than two days.

“I’ve been in real estate for 33 years and I’ve never seen it like this,” said state Rep. Roger Chase, R-Huron. “A lot of people want to move here.”

The frenzied market is pushing up home prices and making it more difficult for low- to medium-income residents to achieve homeownership. The $45,000 average yearly income in South Dakota cannot compete with the purchasing power of a six-figure, out-of-state salary.

As a result, the rental market is impacted as well.

“All of this demand doesn’t seem to be able to be fed with home purchases, so it’s going to the rental market,” said Bryan Achbach, director of the Pennington County Housing and Redevelopment Commission.

Many of the major complexes the coalition uses in Rapid City are at 100% capacity with waiting lists, which is not normal, Achbach said. The commission’s clientele has had trouble finding units to rent and existing renters are seeing rents rise rapidly, Achbach said.

“Families are being put in a really tough spot for circumstances that are really out of their control,” he said.

The strong seller’s market is putting an emotional strain on potential buyers, especially those trying to achieve home ownership for the first time.

Eilish O’Toole of Sioux Falls thought 2021 was the right year for her to buy a home.

Her rent was becoming high enough to equal a mortgage payment and O’Toole, who works for Lutheran Social Services and helps former inmates transition back to society, wanted a yard for her son to play in.

O’Toole, 25, got pre-approved for a low-interest FHA loan in January and initially started looking for a home on the west side of Sioux Falls. She expanded her search into downtown and eventually into eastern Sioux Falls as houses in her price range of around $200,000 were snatched off the market.

The first house she looked at was put under contract by another buyer just as O’Toole pulled in the driveway for a tour. Her agent then texted her at 8 p.m. to alert her of a showing for another house. When O’Toole arrived, 30 other people were walking through the property, one of the few homes left in her price range. O’Toole put in bids well over asking price on four houses but was out-bid each time.

O’Toole eventually gave up the search and signed a lease in a new apartment. She didn’t want to stay in her current apartment, where rent was increasing by 18% and beginning to charge separately for utilities. The new apartment wasn’t easy to find either, she said.

“I think everybody must be moving to Sioux Falls,” she said. “Apartments were [renting] before I could pick up an application.”

Housing availability and affordability are concerns in every South Dakota county, said Rep. Chase, who will chair a legislative summer study to identify how the state can help communities strengthen their local housing market. The first meeting is scheduled for June 9 in Pierre.

The seller’s market among real estate in South Dakota is part of a nationwide trend.

Available housing inventory in the U.S. hit a record low 1.03 million units at the end of February, according to the National Association of Realtors. The number of homes on the market in March was 52% lower than in March 2020, according to realtor.com.

First-time buyers Miranda Dingus and her husband competed against 22 other offers on a home. Before they bid on one home, 66 other people had already toured the property.

Macy Trautner, 24, and her boyfriend were looking to move out of metro Sioux Falls, but homes in the surrounding towns were selling too fast and too far out of their price range. One house the couple toured in Harrisburg had sold the day after it went on the market for $30,000 over the asking price.

Another home they were interested in started receiving bids in the first hour of an open house. The first-time homebuyers ended up purchasing a home that had been damaged in the 2019 floods and hope to move in in June once repairs are completed.

Beth Meyer of 605 Real Estate warns her clients they may have to act fast and put in multiple bids before getting a contract. In the first weekend in May, she had 40 people look at a $260,000 home. This time last year, she considered an open house successful if it attracted six potential buyers.

Some sellers are using the extra cash they get for their homes to construct a new home, a prospect that is costly due to high prices for construction materials.

Those trying to build are seeing anywhere from an 18% to 80% hike in material costs, especially in lumber, because of production shutdowns during the pandemic. On the national level, the price of lumber reached an all-time high of $1,359 per thousand board feet, according to Fortune Magazine.

Last year, lumber for a house would cost Sioux Falls area builder Mike Schlapkohl about $30,000 on average. This year, prices are averaging more than $52,000, a 73% increase. Other construction material prices are also rising, especially those manufactured in parts of the country that shut down for longer periods of time during the pandemic, such as California. A lot of resin used to make PVC and OSB pipes is brought in from Texas, where a February deep freeze halted manufacturing.

“The mills shut down and were not producing material, but the demand stayed the same or went up,” Schlapkohl said.

Schlapkohl, who has been a builder in the area for about eight years, said the spike in lumber prices hasn’t deterred people who want to build.

“Everyone I’m working with just sold their house for $60,000 to $80,000 more than they would have normally, so they’re not too concerned about higher cost in lumber,” he said.

In February, there were building permits authorized for 1.68 million privately owned new housing units across the country, according to the U.S. Census Bureau, 17% above February 2020.

Costs for materials to build homes in the Governor’s House Program have gone up about 19%, said Lori Moen, chief operating officer for Grow South Dakota. Governor’s houses are affordable homes built at the Mike Durfee State Prison in Springfield for low- to medium-income families.

The income levels of some new entrants into the homebuying population have also made it harder for low- to medium-income people to afford a home, said Nacasius Ujah, a finance professor at South Dakota State University. More millennials with more spending power are entering the housing market, further driving up prices and reducing inventory of moderately priced homes, he said.

The average cost of a home has also increased over the past decade. According to Zillow, a single family home in South Dakota on average cost about $161,000 in 2012; this year the average is $253,000.

“In our rural communities, the housing stock is short to begin with,” she said. “Families who live in those communities are finding it difficult to find housing they can afford and that’s suitable for them."

Lemmon, population 1,200, straddles the border of North Dakota and South Dakota and is also seeing strong interest from of out-of-state homebuyers.

Cathy Evans, Executive Director for Lemmon Housing and Redevelopment Commission, said she recently received a call from a California resident looking to purchase a home in Lemmon next year.

“In the past year, I’ve gotten lots and lots of phone calls from people needing housing,” she said. “If I have a house come open, people know about it in five minutes.”

“There are people wanting to move here, but there’s no housing for them to move into,” she said.

The Black Hills National Forest Recreation Management will host the annual half-price season pass sale for the 2022 season on Dec. 3.

Macy Trautman and her boyfriend, Adam Christensen, were finally able to purchase a house in Sioux Falls after being outbid on three different houses.

This home for sale in northern Sioux Falls was priced at $470,000 in early May. Open houses for homes in the $200,000 price range have drawn dozens of potential buyers amid a seller's market with low inventory.