Jerry Penry knows South Dakotans might be disappointed to hear that their tallest mountain is 11 feet shorter than they thought, but he can't help it.

When he learned that the popularly accepted elevation of Black Elk Peak (formerly known as Harney Peak) is based on surveys from the late 1890s, Penry, a professional surveyor from Nebraska, was compelled to undertake a new effort with modern technology.

“We’re living in an era of precise measurements,” he said, “and to have something out there that still relies upon something of an imprecise nature, it’s almost a disservice to the way we say that we can measure things.”

In September, Penry and six team members spent two days of their own time and resources producing what might be the best-ever measurement of the elevation of Black Elk Peak.

The team determined that the highest natural point on the peak — excluding the stone-built fire lookout tower that sits atop it — is 7,231 feet above sea level. That is lower than the 7,242 feet listed on the bronze plaque at the summit, but still high enough to be the tallest mountain in the state. The team also determined that the highest man-made point on the peak — the tip of the lookout tower’s lightning rod — is 7,262 feet.

The effort had its beginnings in the curiosity of Black Hills photographer Paul Horsted of Custer, who has published a series of books pairing historical photographs of scenic and historic sites with his modern images of the same sites.

Horsted came across an article about Black Elk Peak by Black Hills pioneer Valentine McGillycuddy, who in 1875 made the first recorded summit of the mountain. Today, the spot where the lookout tower stands is considered the highest point on Black Elk Peak, but in McGillycuddy’s article, he said the highest point was a natural spire that stands about 100 yards south of the tower site.

Horsted wondered if McGillycuddy was right, and his quest for answers led him to Penry, a land surveyor from Denton, Neb., who spends much of his free time using surveying techniques to answer historical questions.

Penry began digging through historical surveying records and noticed that Black Elk Peak’s published elevation had changed little since surveyors pegged it at 7,240 feet in the late 1890s.

“So I knew that if it was still showing basically that elevation today, nobody had checked it,” Penry said.

Further research failed to unearth any modern surveys of the peak’s elevation. Penry grew excited about the opportunity to conduct a new survey with technological tools that were unavailable in the late 19th century.

In those days, Penry said, surveyors in the Black Hills used an elevation benchmark at a Deadwood railroad depot as the starting point to calculate peak elevations using vertical angles, triangulation and other aspects of trigonometry. The benchmark was set by railroad officials who recorded the rise and fall of elevation as they laid tracks across the country.

But there was another underlying problem all along, according to Penry, who researched the old surveying efforts and discovered that the 1890s estimate of 7,240 feet was erroneous. He does not know how the early surveyors produced the mistaken number, but he knows that when he calculated the elevation of the peak using the 1890s benchmark as his starting point, he arrived at 7,227 feet.

That number should have been the starting point for future adjustments to Black Elk Peak’s elevation, but it wasn’t.

“They just kept applying their adjustments to the same wrong number,” Penry said.

To set the record straight, Penry and Horsted set out for Black Elk Peak in September with a trove of tripods, GPS instruments, notebooks and other equipment. Other members of the team included Penry’s wife, Jenny Stukel Penry; Horsted’s wife, Camille Riner, and daughter, Anna Marie Riner; Kurt Luebke, a professional surveyor from Montana; and rock climber Daryl Stisser of Custer.

Over two days, the team collected data from atop and below the peak for their own analysis and for analysis by computers at the National Geodetic Survey.

Coincidentally, the expedition happened about a month after the U.S. Board on Geographic Names changed the name of the mountain from Harney Peak, which was inspired by the late Gen. William Harney, to Black Elk Peak, for the late Native American holy man Nicholas Black Elk.

Horsted's question about the true high point on the mountaintop was answered, although perhaps not definitively, when Penry determined that the spire south of the lookout tower is about 2 feet lower than the rock under the tower.

Horsted has taken to calling the spire McGillycuddy Peak and remains open to the possibility that it might have been the taller of the two points when Valentine McGillycuddy made his climb in 1875. Horsted’s study of old photographs indicates that some of the spire’s rocks may have fallen or been pushed over since then, making it difficult to determine how high the spire once was.

The rock under the lookout tower also has been altered. It was blasted with dynamite to accommodate the first tower construction in the early 1900s, and Penry estimates that about 1 foot of rock was obliterated.

The past elevations of either point might never be known definitively, but Penry is confident that his new elevations are the most accurate ever established for the various points on Black Elk Peak. Even so, he does not plan to push for changes to signs, publications or websites where the peak's elevation is listed. That’s partly because Penry undertook the project only to satisfy his own curiosity, and partly because there is no formal process for requesting such changes.

Currently, the publications and websites of government agencies are maddeningly conflicting. The datasheets of the National Geodetic Survey, which seem to be the most official source, say Black Elk’s Peak elevation is 7,244 feet. But the U.S. Geological Survey’s National Map says 7,191 feet, while the same agency’s Geographic Names Information System says 7,211 feet. The Black Hills National Forest, which has Black Elk Peak within its boundaries, says 7,242 feet, as does Custer State Park, which contains a popular hiking trailhead that leads to the peak.

A change in the elevations published by the U.S. Geological Survey is anticipated as the agency carries out its ongoing 3D Elevation Program. The program collects high-quality light detection and ranging data, also known as lidar, from aircraft equipped with sensors to detect reflections from a pulsed laser beam. That effort, which is spreading across the nation in eight-year cycles, has not yet reached western South Dakota.

Anyone wanting more information about the Penry-led Black Elk Peak elevation survey can find it on his detailed website, penryfamily.com/harneypeak/main. It includes historical documents, modern and historical photographs, images of pencil-written field notes and more.

Like a scientist defending a theory, Penry said he welcomes efforts to duplicate or disprove his results. He is confident in his work, and he has an endorsement from David Doyle, the retired former chief geodetic surveyor for the National Geodetic Survey.

Doyle said Penry and the other members of his team are representative of the kind of exacting persistence that is often required of surveyors. The team’s improvement on earlier surveys of Black Elk Peak is also reflective of the continuum of professional surveying, which grows ever more precise as technologies and techniques improve.

It's the allure of perfect accuracy that pushes sleuths such as Penry out into the field, Doyle said.

“It’s chasing the truth, if you will, and you may never actually get there," Doyle said. "But you’re always in a quest to make it the best it can possibly be.”

Paul Horsted will present a free program about the Black Elk Peak survey project at 2 p.m. Saturday, Jan. 7, at the Custer County Library Annex, 447 Crook St. in Custer. The program is sponsored by the Custer County Historical Society and is open to the public.

Jerry Penry has bad news for another one of South Dakota’s highest points. 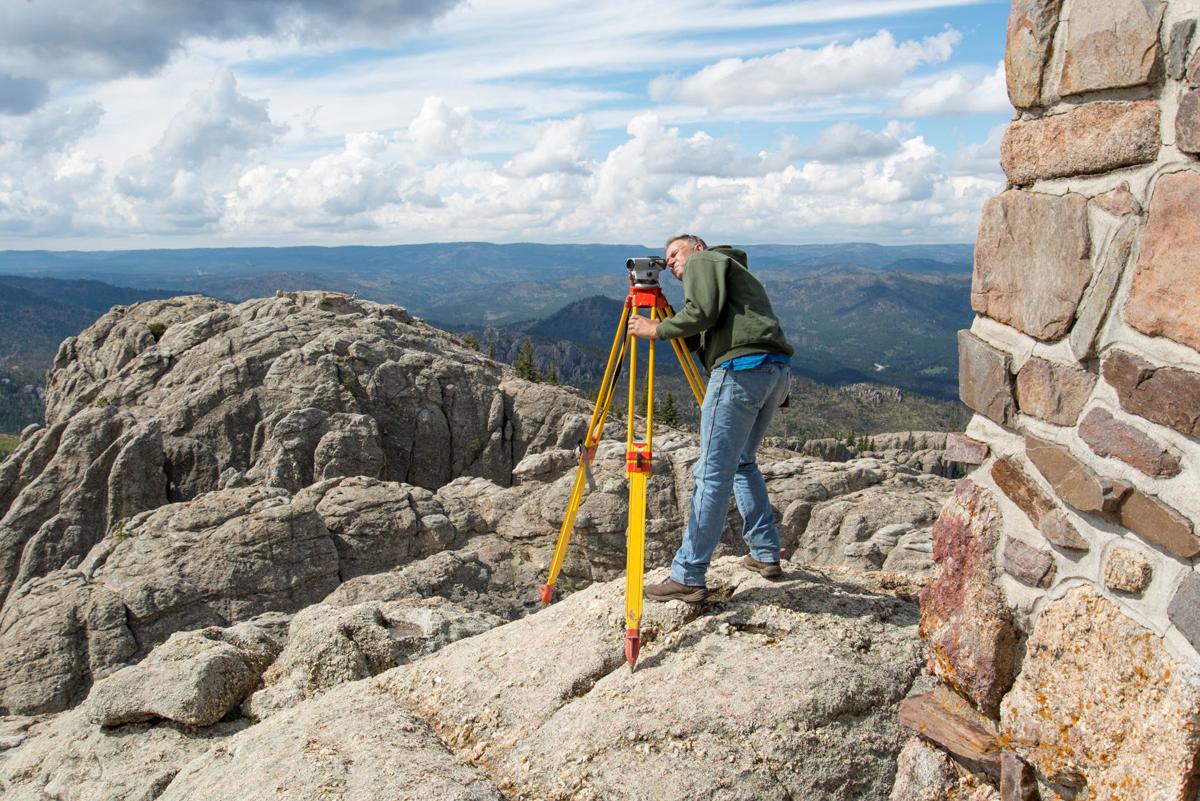 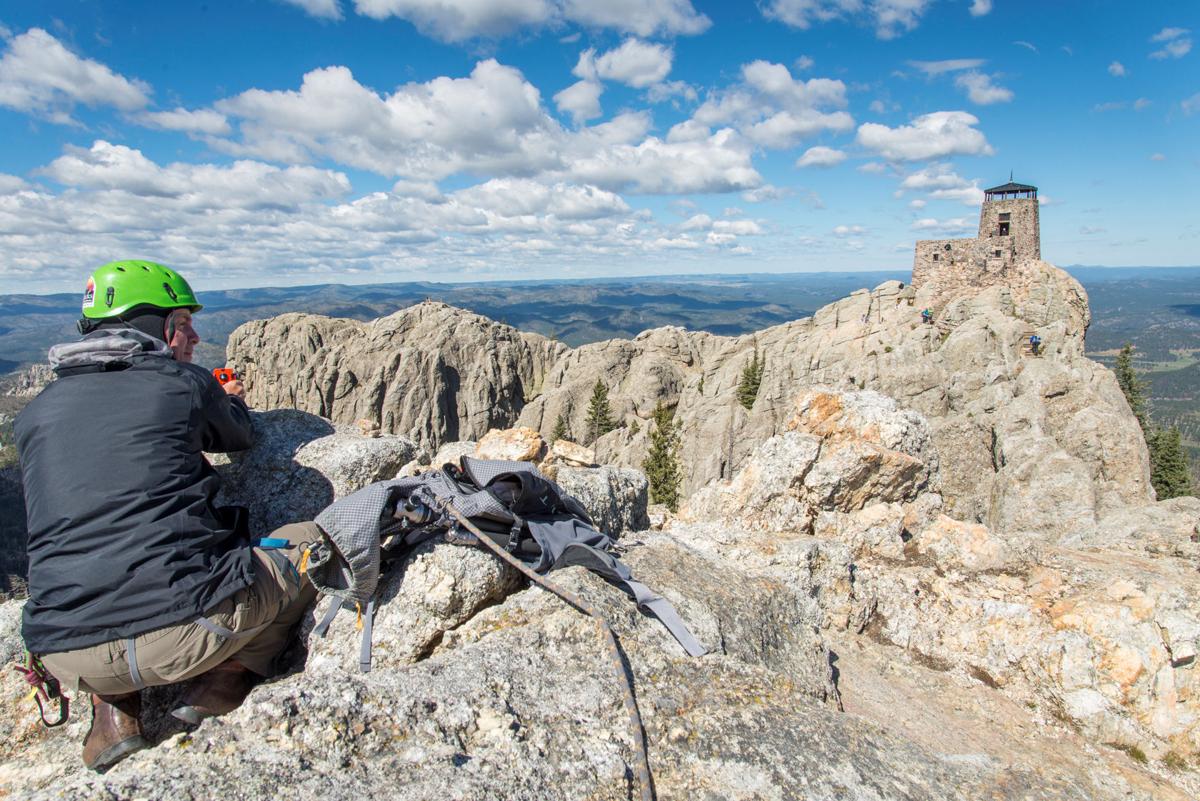 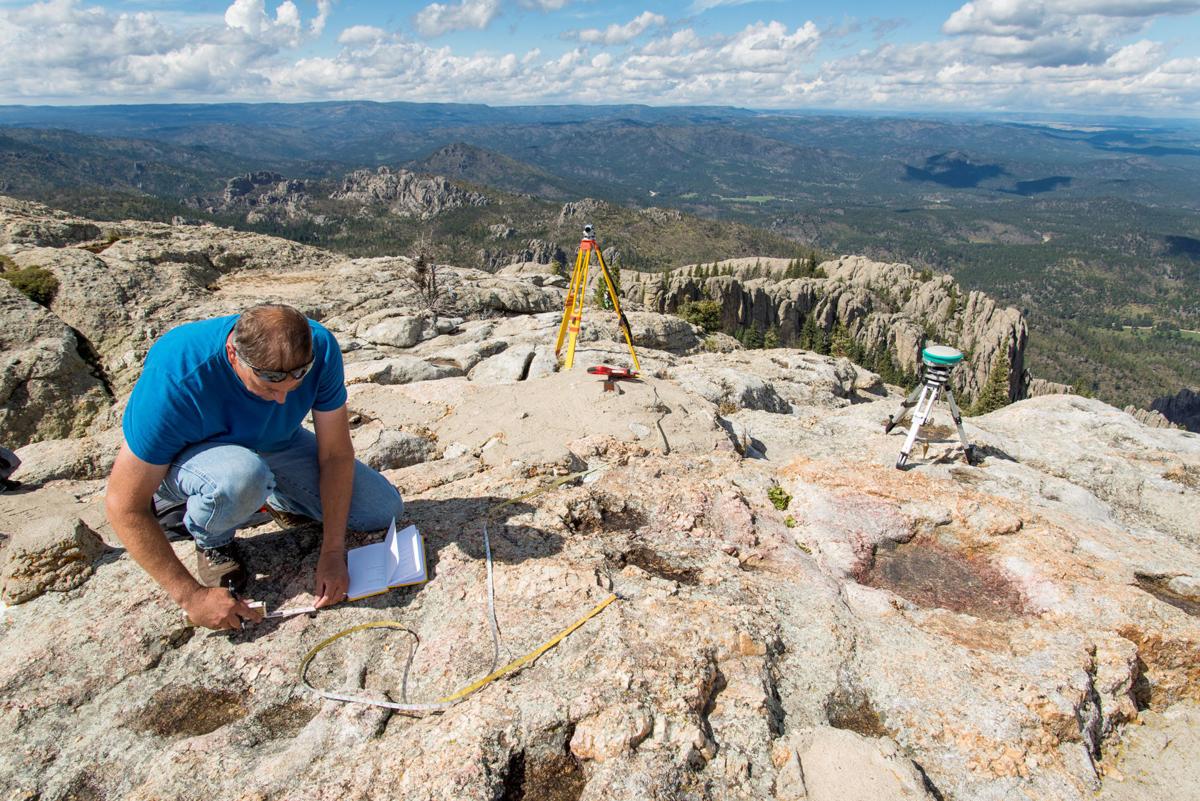 Jerry Penry measures the diameter of the drill hole at the center of the former Airway Beacon Tower on Black Elk Peak.