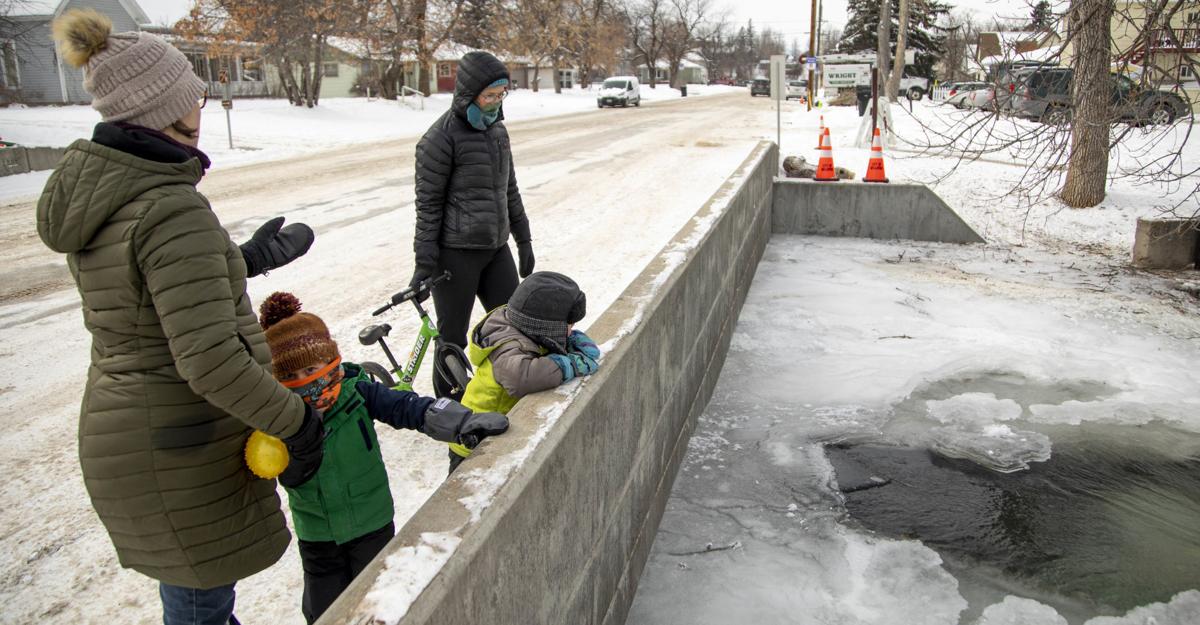 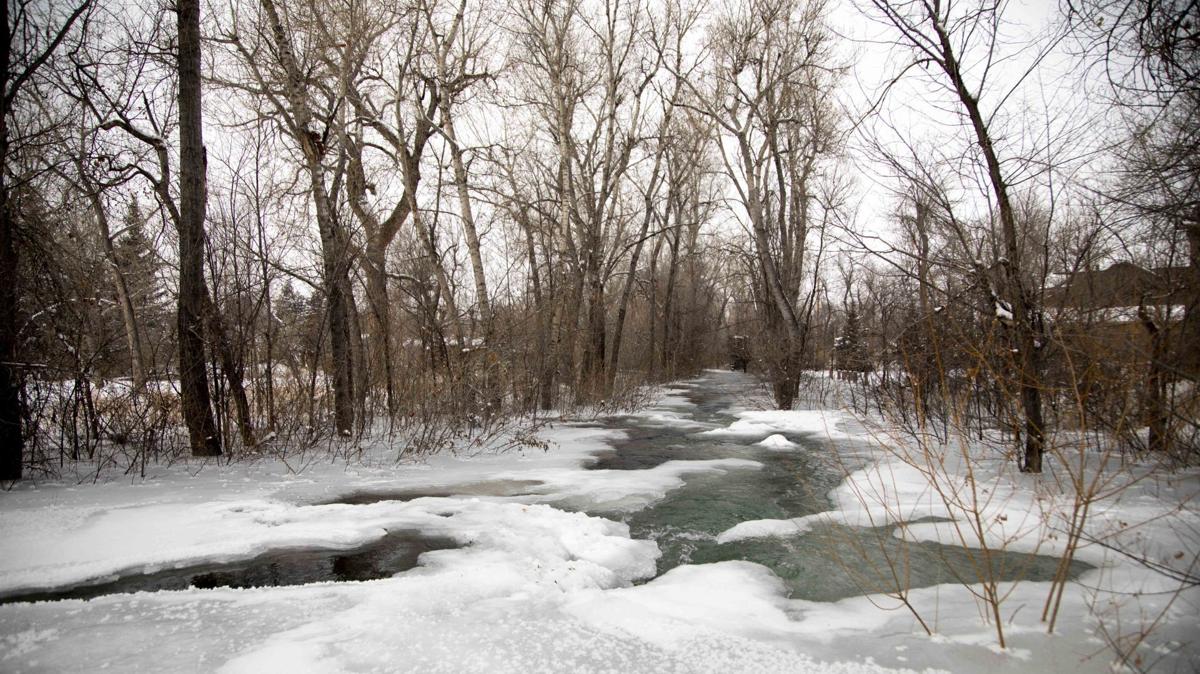 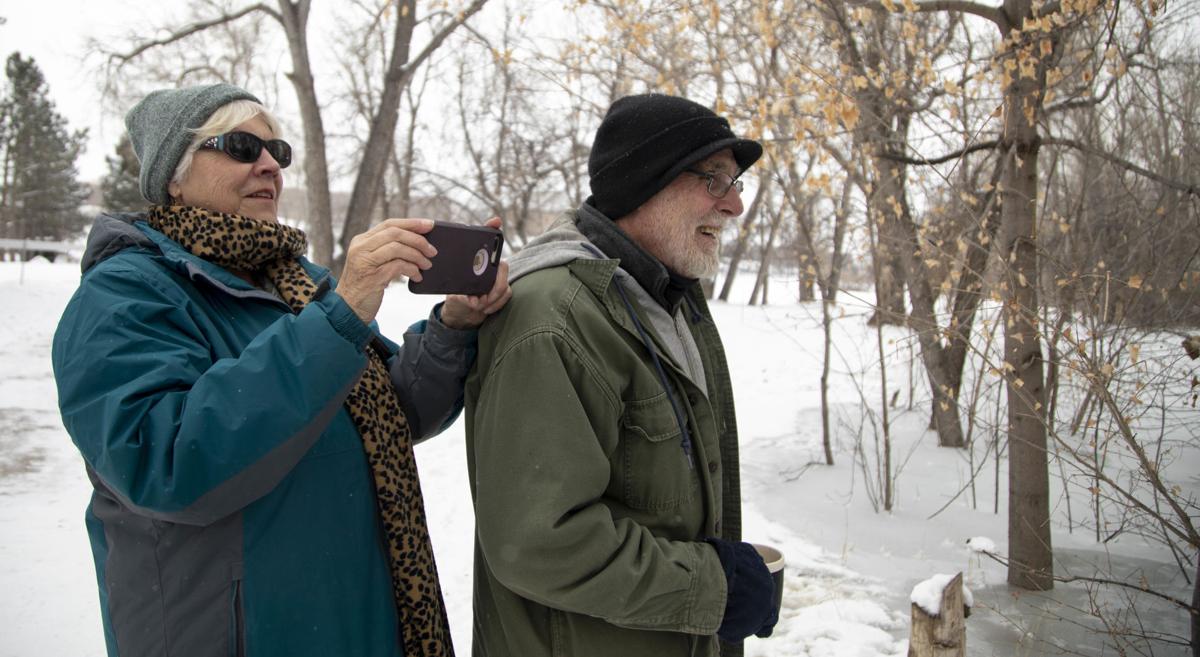 Nan and Gary Steinley of Spearfish look at Spearfish Creek where minor flooding occurred on Tuesday. "We were just curious," Nan said. "We wanted to see what happens with this particular creek because it's so different, you know, freezing from the bottom up." 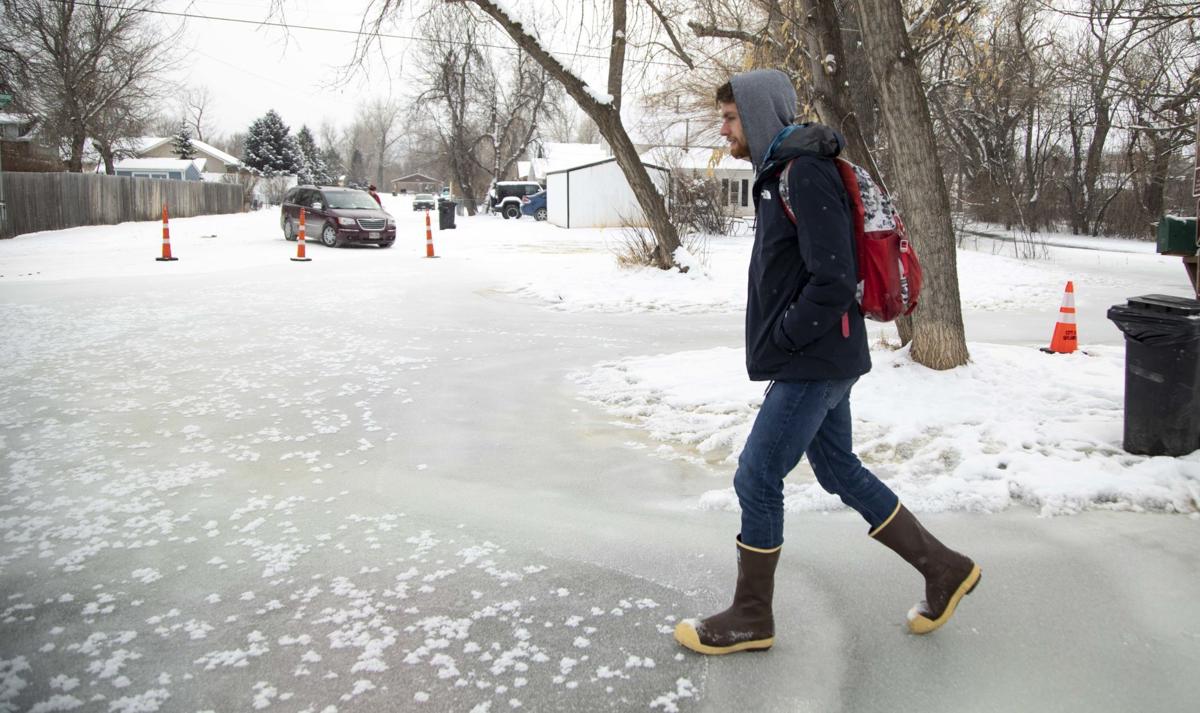 Black Hills State University student Keith Osowski makes his way back from campus near Spearfish Creek on Tuesday in Spearfish. 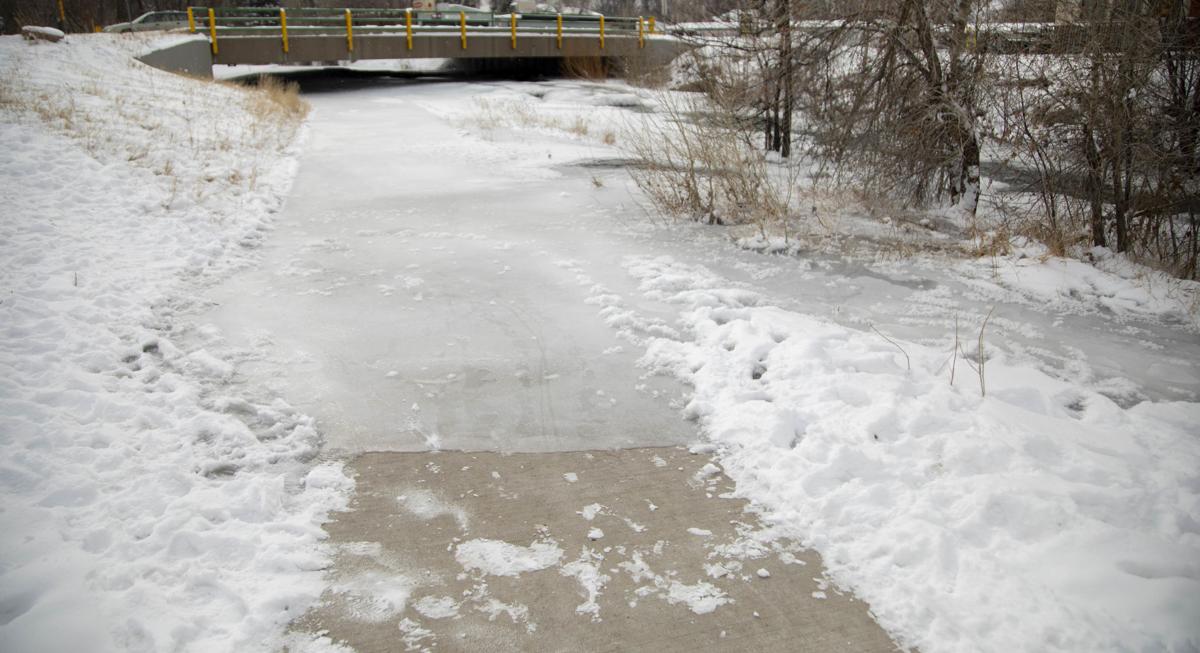 Ice covers the walkway that goes under Jackson Boulevard in Spearfish. 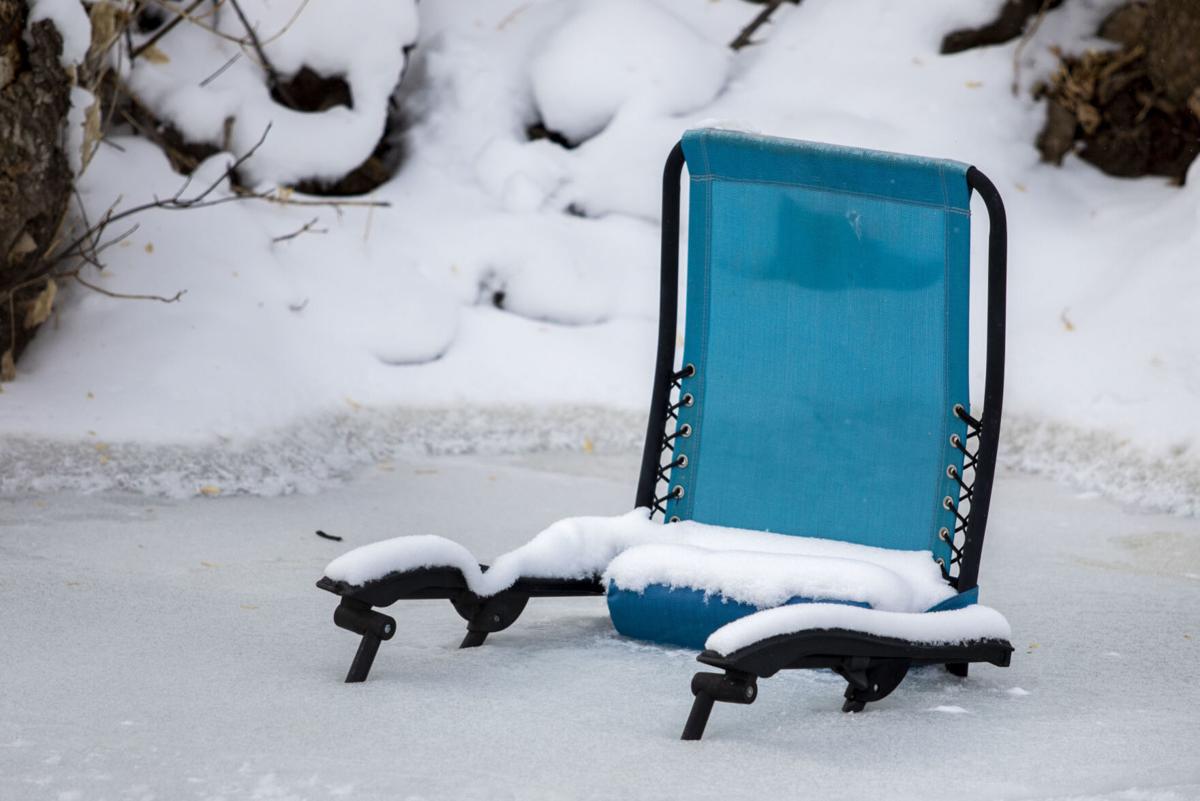 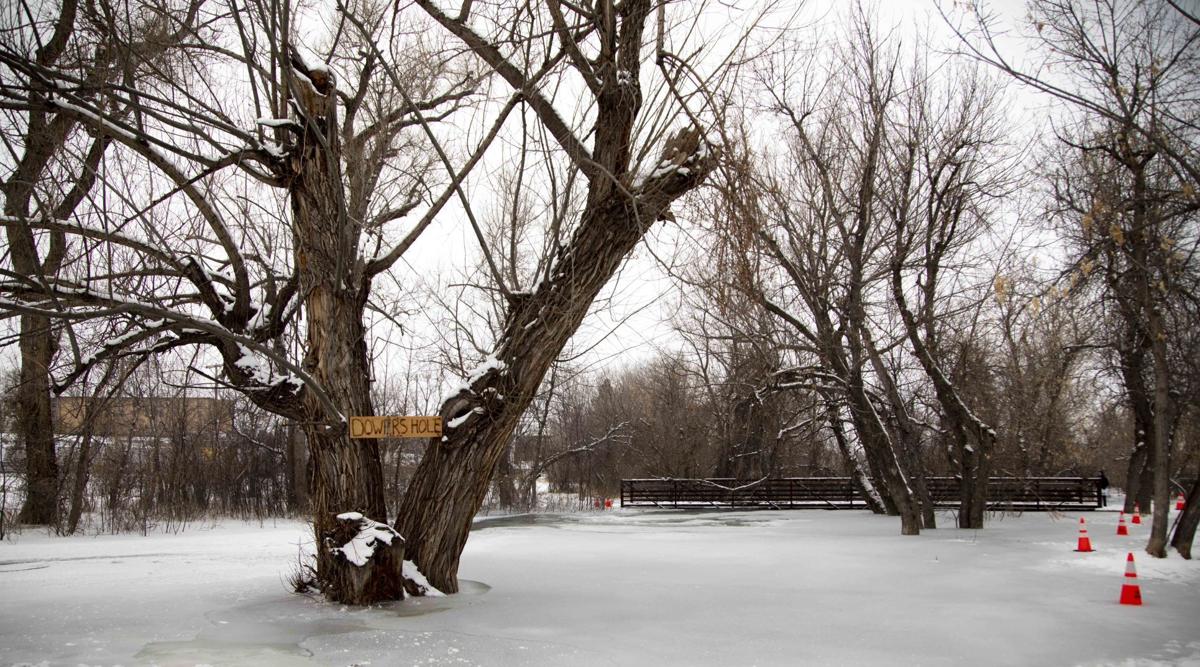 SPEARFISH | An unusual winter phenomenon is causing Spearfish Creek to freeze from the bottom up, pushing water out of the creek bed and prompting the National Weather Service to issue a flood advisory until 11 a.m. Friday.

"As we have endured this long cold snap, there are several areas of the recreation path and streets that are currently impacted by ice. Please avoid these areas and use caution anywhere along the creek where there is ice out of the stream path," a statement from the city said.

Spearfish Public Safety Director Pat Rotert told the Journal Tuesday it is a fairly common occurrence in the city during extended periods of cold weather.

"When we get a really long snap like we've had for the past 10 days, we see this," Rotert said. "Back in 2008, we had worst than this where water was getting up into these areas. Hopefully, as temperatures start to come back down, we'll see this abate and get back within the banks."

The National Weather Service said Tuesday morning that an ice jam was causing minor flooding due to the recent cold snap that has featured temperatures well below zero since Thursday throughout the Black Hills.

"Typically when this occurs, minor flooding occurs near Third Street, along North Ames Street, around Nash Street, around Rushmore Street and impacts most of the creek crossings and several areas of the recreation path," the National Weather Service said in the bulletin.

Areas that will experience flooding include Spearfish Creek downstream to the Red Water River in north central Lawrence County.

City officials are warning residents to not walk on ice that is near or on the creek bed.

"The ice is unstable and there are areas where you could fall through," a statement from the city said. "As we get out of the more severe temperatures these conditions should begin to abate."

The minor flooding is not expected to cease until Friday when temperatures in Spearfish are expected to reach just above the freezing point for the first time in 15 days. Records from the National Weather Service show the last time Spearfish recorded a daily high temperature above 32 degrees was Feb. 4.

How many of us can say we have never, ever drifted onto the shoulder of the highway we were driving on? Those who have never done so may cast …

Nan and Gary Steinley of Spearfish look at Spearfish Creek where minor flooding occurred on Tuesday. "We were just curious," Nan said. "We wanted to see what happens with this particular creek because it's so different, you know, freezing from the bottom up."

Black Hills State University student Keith Osowski makes his way back from campus near Spearfish Creek on Tuesday in Spearfish.

Ice covers the walkway that goes under Jackson Boulevard in Spearfish.