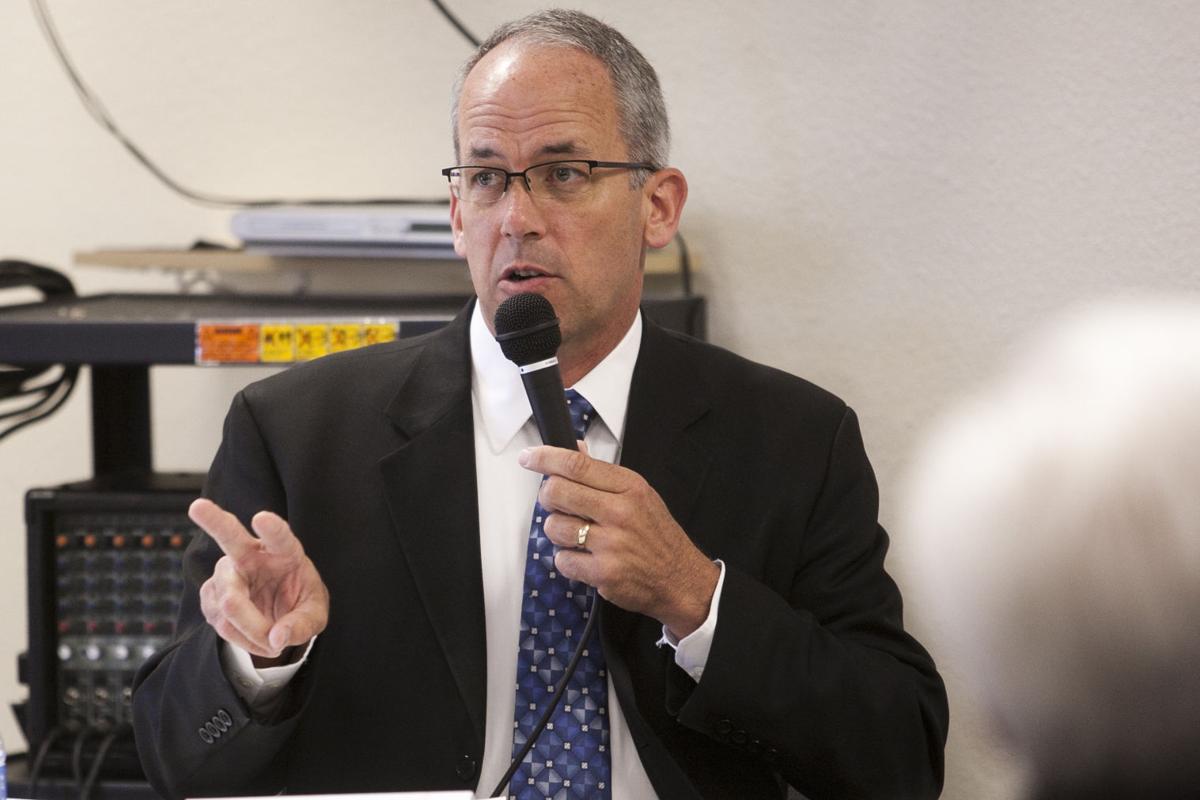 In a Friday debate, Rapid City mayoral candidate Steve Allender responds to a question on how to solve the problem of the homeless in Rapid City. Allender debated incumbent Mayor Sam Kooiker. 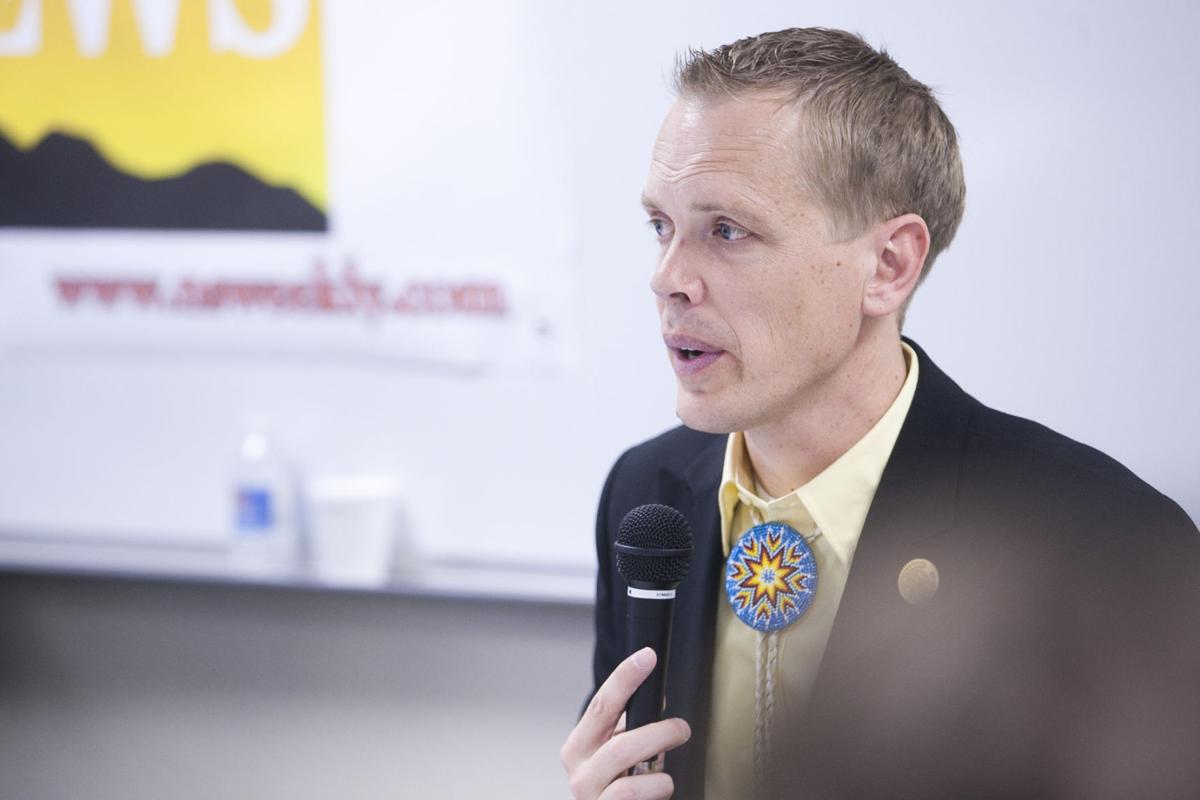 Rapid City mayoral candidate Steve Allender admitted Friday during a debate that he engaged in racially charged “insult humor” with co-workers two decades ago while he was a police officer.

“I’m not a racist,” Allender told a crowd of about 50 people, largely Native American, crowded into a classroom at Oglala Lakota College in northern Rapid City. “I am a human being, though.”

Allender is challenging Mayor Sam Kooiker, who is running for a third term. The election is on June 2.

In his group of co-workers between 1990 and 1993, Allender told the crowd, everyone participated in what he described as friendly ribbing. He stopped participating in 1993, he said, when he learned that fellow officer Glen Yellow Robe, a Native American, was tape-recording the interactions. Allender said Yellow Robe had earlier introduced racial jokes to the group and made everyone else comfortable with it.

In the Native Sun News, a weekly newspaper in Rapid City, Yellow Robe is quoted as telling a different story from the one Allender told on Friday. The article quoting Yellow Robe specifies racial slurs and insults that Allender allegedly directed at Yellow Robe and others. The article did not include a response from Allender.

The Friday debate was sponsored by the Native Sun News.

Kooiker criticized Allender’s response to the racial allegations and kept Allender on defense for much of the 1½-hour encounter.

“I always wonder what someone hopes to accomplish by making racial slurs and jokes,” Kooiker said. “And if it’s a way to cope, then I would recommend instead to start fishing, camping or coin-collecting.”

On a related issue, Kooiker condemned Allender’s previously published criticism of Kooiker’s star-patterned bolo tie, which Kooiker wore during the debate. In an interview published in April by the Dakota Free Press blog, Allender was quoted as saying Kooiker’s use of the tie “tokenizes” Native Americans.

Kooiker said Friday that the tie is a gift from a Native American friend and he wears it because he loves and respects Native American culture, adding in reference to Allender, “We could have a future mayor who doesn’t.”

Allender said the tie is one of several ways Kooiker tries to reap political gain from Native American symbols.

“If it’s a good tie, wear it all the time,” Allender said. “Wear several of them. Not just when you show up to a Native American event.”

The two disagreed sharply over a question about unsolved investigations into Native American deaths.

Allender said officers under his direction regularly tended to the unsolved cases by running fingerprints periodically and offering rewards.

Kooiker said that while Allender was chief of police, Allender failed to create the cold-case unit that Kooiker requested. Allender’s successor, current Police Chief Karl Jegeris, has since created the unit.

Several times in the debate the audience made subtle noises that seemed to express approval of Kooiker statements. After the debate, several Native American audience members interviewed by the Journal said they support Kooiker and are bothered by the racial allegations against Allender.

Allender did go on offense at times, including a portion of the debate when he accused Kooiker of parroting “buzzwords” and pushing failed approaches to solving Native American problems.

“I would be more excited about that kind of thing if there were some results to point back to and say, ‘This is really working, we’re on the right track.’” Allender said. “The fact is, we don’t know what track we’re on.”

Allender said he has new ideas, like a campus approach to combat Native American homelessness. He said the approach has been pioneered in other cities and is predicated on gathering services into one place to provide shelter, addiction counseling and other assistance in an intensive program. Allender said he has spoken to investors willing to support “tiny houses” as shelters to get homeless people off the streets.

Kooiker defended his record on Native American issues and reeled off a list of projects completed during his tenure, including the establishment of a polling place at Lakota Community Homes; returning some former Native American boarding school and hospital land parcels within the city to tribal trust status; and the creation of Willow Park in North Rapid, where the Native American population is especially high.

But the allegations about Allender’s past shadowed all other topics. He acknowledged that he would not vote for the person he was 25 years ago, but he told the audience they’d be getting a man with 25 years of maturing experience if they vote for him.

“Whatever we’ve done up to this point, we’re still a community that’s being divided. And it’s not being divided because I told inappropriate jokes 25 years ago in the workplace,” Allender said. “There’s no excuse for that. I was wrong for doing it. But I stopped doing it in 1993. We have to move together forward, hand in hand, looking out the windshield and not the rearview mirror.”

Kooiker said that as someone whose gait is affected by cerebral palsy, he can relate to Native Americans who might be upset about Allender’s past.

One dead, one injured after crash on icy road near Piedmont

One man is dead and another seriously injured after a rollover crash Tuesday night on an icy road in Meade County.

In a Friday debate, Rapid City mayoral candidate Steve Allender responds to a question on how to solve the problem of the homeless in Rapid City. Allender debated incumbent Mayor Sam Kooiker.