In the air and underground, Brits honored in Rapid City
Share this
1 of 2 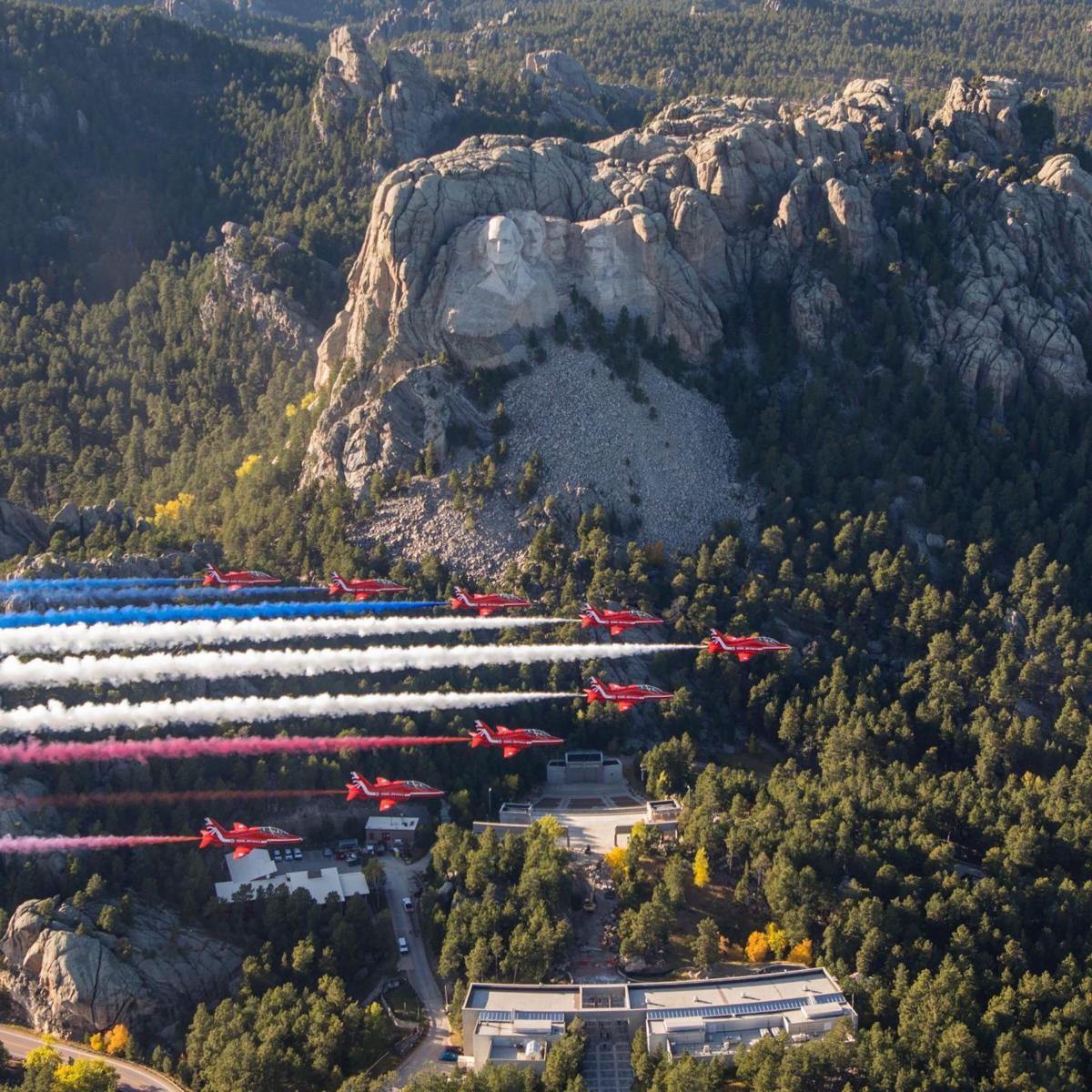 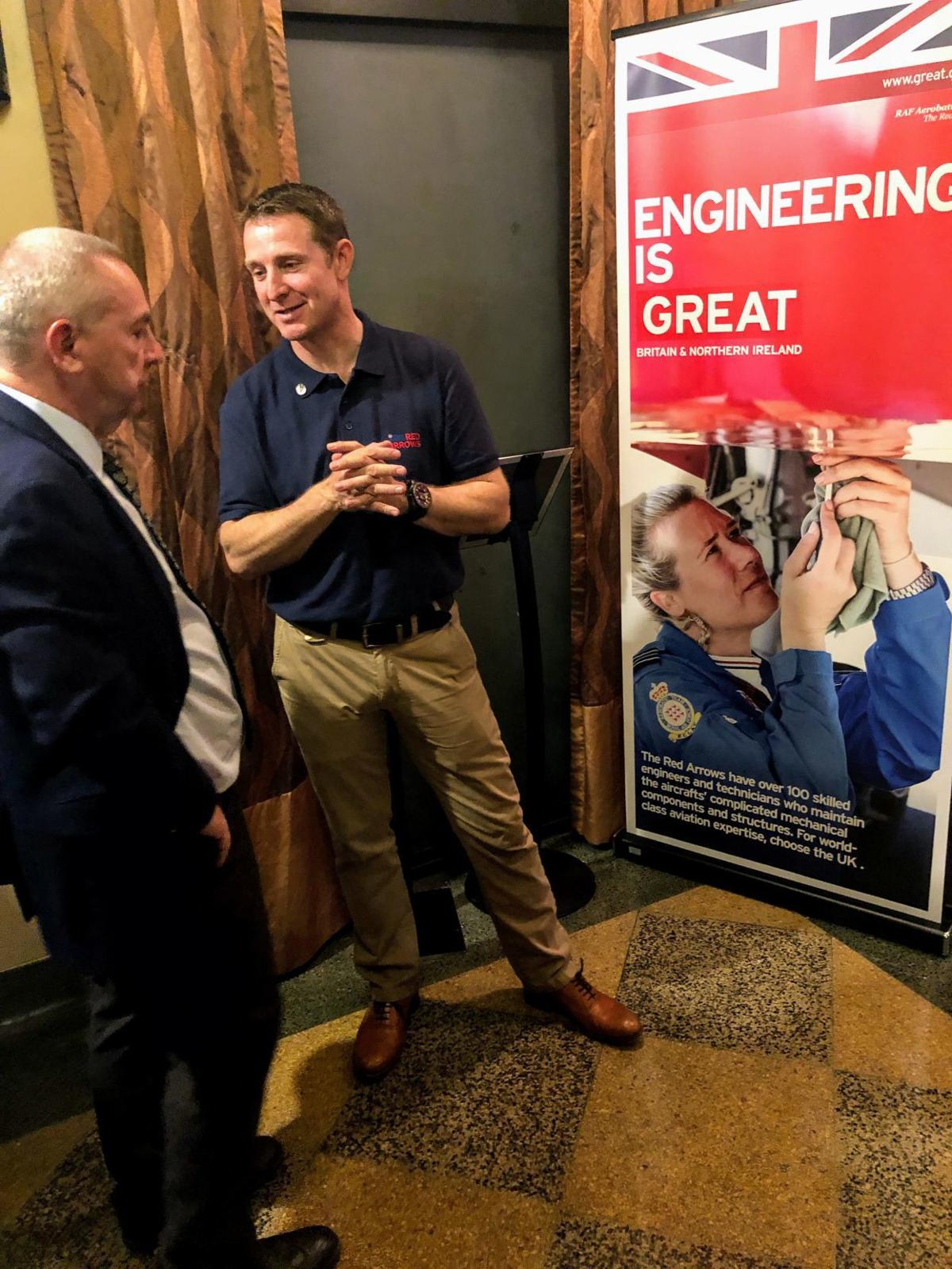 British air power and science were feted Tuesday in Rapid City, where talk of aerobatic jet maneuvers mixed with discussion of a deep underground science experiment.

An evening reception was conducted at the Vertex Sky Bar on top of the Hotel Alex Johnson for several sets of honored guests, including the Royal Air Force’s Red Arrows Aerobatic Team, a British diplomat and a group of U.S. and international scientists associated with the Deep Underground Neutrino Experiment (known as “DUNE”) that will be installed in the former Homestake gold mine at Lead.

The reception capitalized on a brief visit by the Red Arrows, who had a layover Tuesday night at Ellsworth Air Force Base en route to the United Kingdom while finishing an 11-week tour of North America. The tour has included appearances at air shows, business receptions and educational events with children.

On Tuesday afternoon, the Red Arrows flew in formation near Mount Rushmore, leaving behind a picturesque trail of red, white and blue smoke.

Another view of our flypast of Mount Rushmore today - what a privilege to have opportunity to visit this #US landmark as part of #RedArrowsTour.
Video by Sgt Ashley Keates. pic.twitter.com/rOtnZljHvb

The brief British presence in the Black Hills was a preview of things to come, according to Nigel Lockyer, director of Chicago-based Fermilab, the lead agency for the DUNE project.

“There will be lots of Brits in South Dakota when the experiment starts being built,” Lockyer said during a brief speech at the reception. “It’s going to be lots of fun having them here.”

Deputy Consul General Maria Rennie, of the British consulate in Chicago, said 125 scientists from 16 institutions in the United Kingdom are participating in DUNE.

“The work that you’re doing here is so interesting, and it’s so globally relevant, and for that reason it encourages international collaboration,” Rennie said.

In 2017, the British government agreed to make $88 million worth of contributions to DUNE. Lockyer said Thursday in a Journal interview that total international commitments to DUNE are currently worth about a half-billion dollars, and he hopes it will reach $1 billion. Those contributions will be paired with U.S. contributions that could ultimately reach several billion dollars.

Work to prepare for a massive excavation nearly a mile underground at the former Homestake mine is already under way. Huge caverns will be carved to house the DUNE experiment, which could be up and running by the late 2020s.

The experiment’s aim is a better understanding of the abundant but little-understood subatomic particles called neutrinos. A beam of neutrinos will be shot through the earth from Fermilab in Chicago to a set of liquid-argon detectors that will be installed 4,850 feet underground at Lead, where they will be protected from cosmic rays and other surface interference.

Goals of the experiment include studying the mass of neutrinos, gaining a better understanding of neutrinos' role in the universe, and perhaps even gleaning new insights into black holes or exploding stars by detecting neutrinos escaping them.

Lockyer said there is international interest in the project because it will be the best place in the world to study neutrinos. Scientists in the neutrino field want to be associated with the best facility, so they are requesting funding from their own governments to conduct research at DUNE.

Fermilab welcomes the international cooperation, because it enables a bigger, better and more ambitious experiment.

“When that basic science is allowed to advance with everybody working on it, it moves faster,” Lockyer said.

LEAD | For the past 17 years, shovels, safety goggles, tramway cars and other remains of the defunct Homestake gold mine lingered in a closed-…

Back to the Underground: Fourth-generation family member to work underground in Lead

There’s a helpful way to conceptualize the science experiment that is being prepared deep underground in the former Homestake gold mine, Fermi…

Ellsworth bombers fly to Saudi Arabia and back

Multiple B-1B Lancers took off Thursday from Ellsworth Air Force Base near Rapid City and flew to Saudi Arabia, according to the Air Force.

LEAD | Deep under Lead during the next several years, scientists hope to witness a game of cosmic, subatomic billiards.

Fearing the effects of a potential federal government shutdown on funding for an underground science facility in Lead, the facility's oversigh…