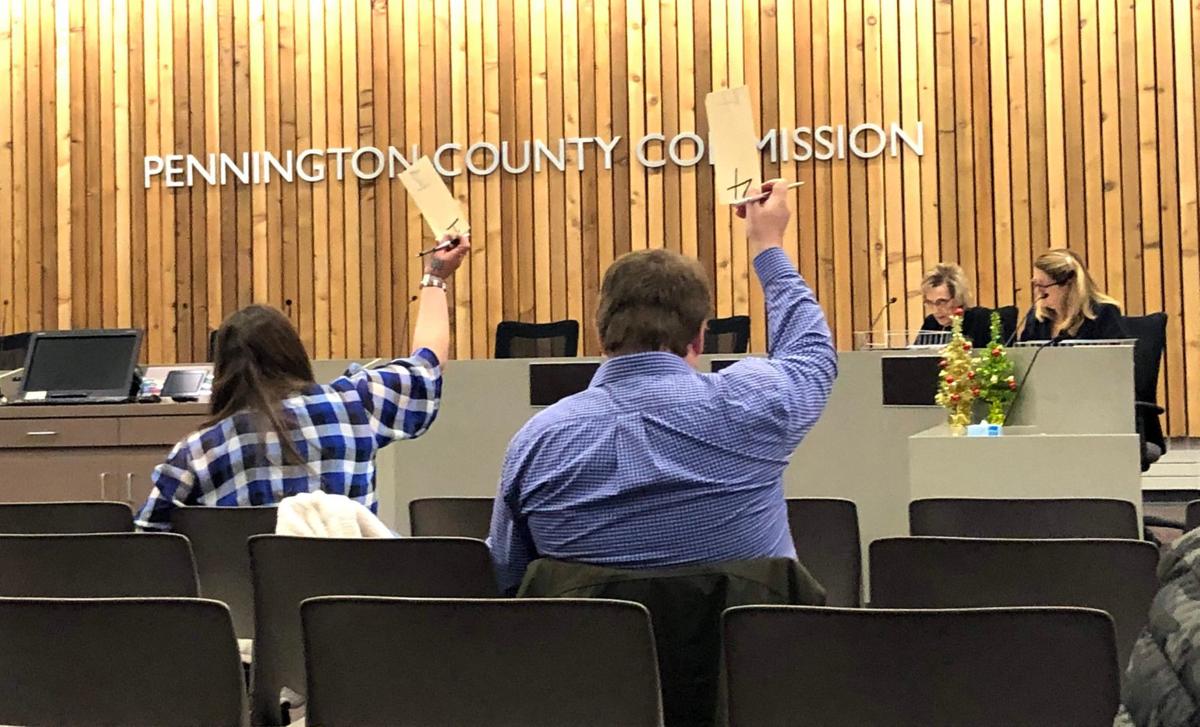 Bidders raise their cards at the Dec. 16 tax-certificate sale in Pennington County's Administration Building in Rapid City, while Treasurer Janet Sayler and her chief deputy, Annette Brant, preside over the sale. 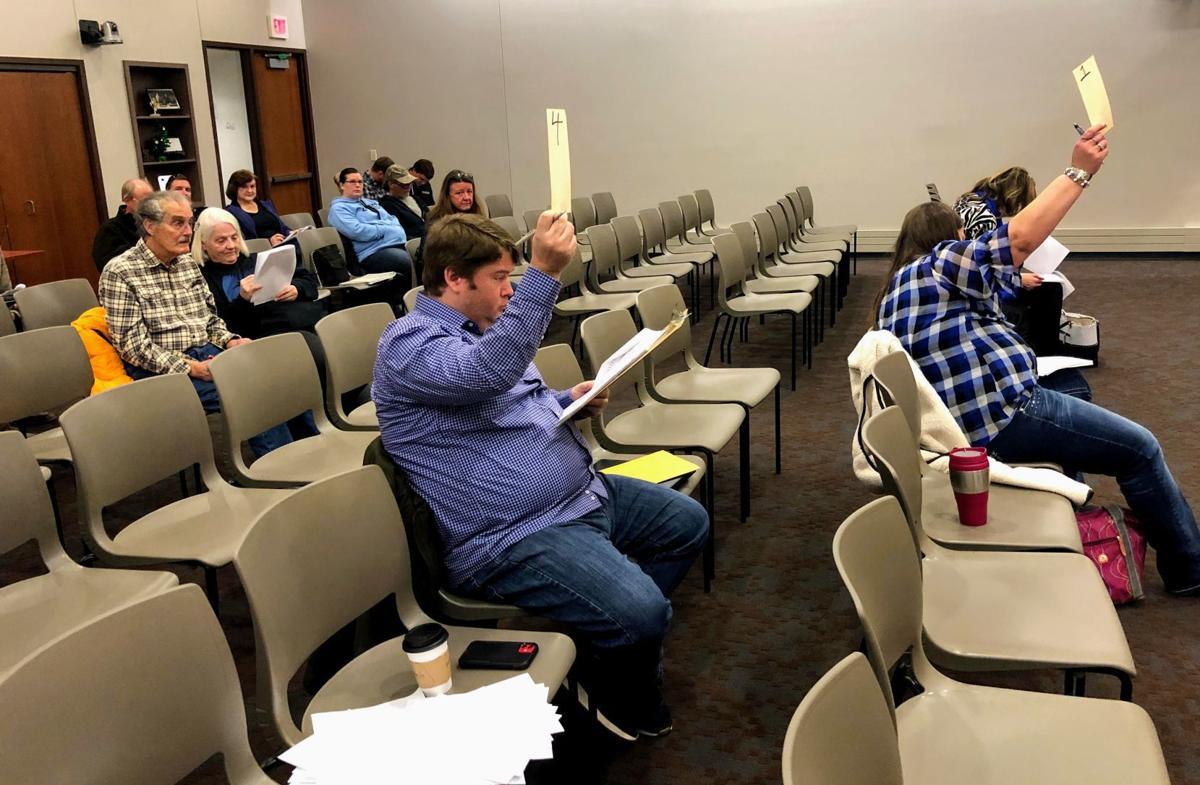 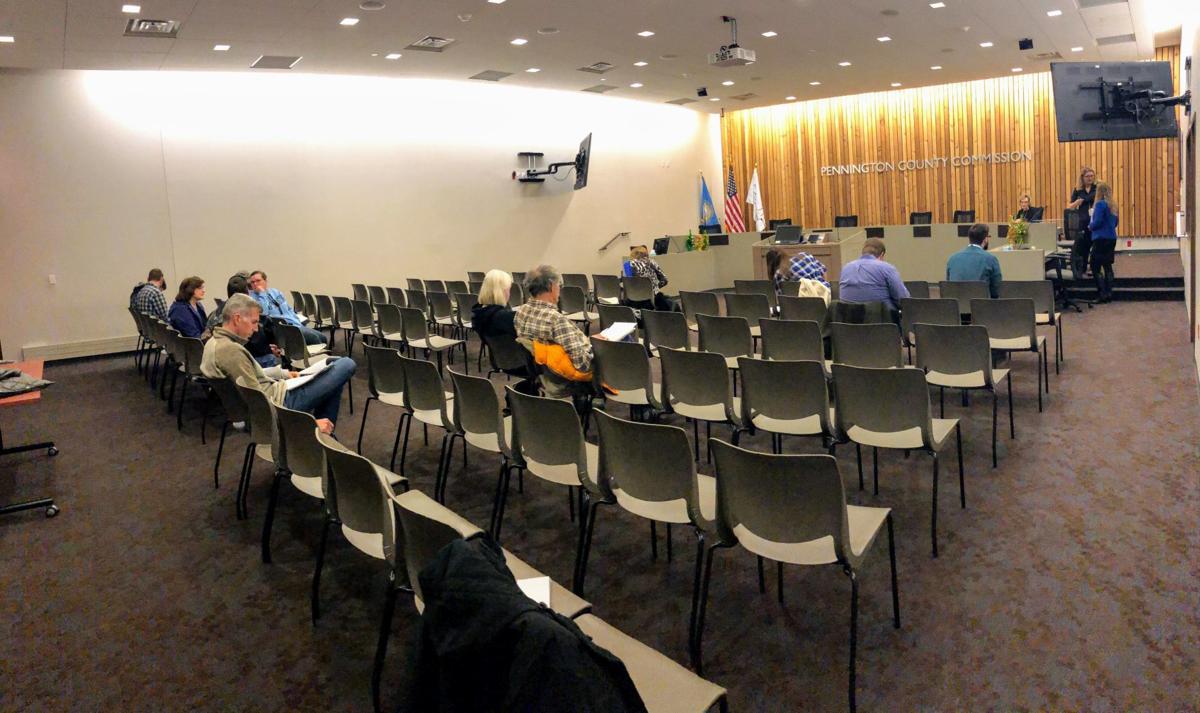 Pennington County raked in $1.2 million recently at a peculiar kind of auction.

It happened on the third Monday in December. Eleven registered bidders fanned out among the rows of chairs in the County Commission Chambers at the Administration Building in Rapid City. County Treasurer Janet Sayler and her chief deputy, Annette Brant, presided from the dais.

At the appointed hour, Sayler read the first legal description from a list of 681 properties.

Nobody raised a bid card.

Sayler recited five more legal descriptions before a card shot up. It was bidder No. 1, and nobody offered a competing bid. The auction’s first sale was made.

By the time the auction concluded several hours later, Sayler had read all 681 legal descriptions one by one, and the county had made 382 sales.

But the buyers hadn’t purchased any real property. They had acquired pieces of paper known as “tax certificates.”

Pennington County is among the South Dakota counties that choose to conduct a tax-certificate sale each year. It’s a method of collecting delinquent property taxes.

The process begins in November, when the Treasurer’s Office sends notices to property owners who haven’t paid their taxes. In early December, the office publishes a list of the delinquent tax bills that still haven’t been paid.

At the auction — always on the third Monday of December — the county offer up a tax certificate for each of the delinquent bills. This year’s auction drew registered bidders from Nebraska, Oregon, Rapid City, Hot Springs and Keystone.

Buying a tax certificate is a little like becoming a short-term lender. It involves an outlay of money with the hope of a future payback, plus interest.

The purchaser of a tax certificate has to pay the delinquent taxes immediately, and remains on the hook to pay the property’s next three years’ worth of taxes.

Meanwhile, the delinquent property owner has a chance to pay up. If that happens anytime in the three-year window, the holder of the tax certificate gets his or her money back, plus interest of up to 10 percent per year. That’s the desired and typical outcome for most tax-certificate investors.

If the property owner fails to pay up within three years, the holder of the tax certificate can start a legal action to take ownership of the property. But that requires investments of time and legal fees that many tax-certificate investors would rather not expend; thus, few situations progress that far.

The benefit for the county — and for other taxing entities that depend on the county’s collection efforts, such as cities and schools — is the influx of delinquent tax revenue paid by tax-certificate investors on the day of the auction. That money might otherwise take several years to collect, bit by bit, from the delinquent taxpayers.

At the auction, many lower-dollar tax certificates fail to elicit bids. That’s because the county charges a fee of 10 percent, with a minimum of $10 and a maximum of $50, on every redeemed certificate. Buyers could therefore lose money on a low-dollar certificate if the property owner pays up before enough interest accumulates to cover the fee.

At the Dec. 16 sale, the 299 certificates that went unsold accounted for a total of $127,769.82 in delinquent taxes — an average of about $427 (after three years, the county can take action to seize and sell those properties).

The 382 certificates that sold accounted for a total of $1,197,303.80 in delinquent taxes, for an average of about $3,134. Those certificates were split among nine buyers.

Competitive bidding abounded at Pennington County’s Dec. 16 auction, and some certificates sold for as low as 4.5 percent interest, which aggravated some veteran bidders. Several times, grumbles of “let ’er have it” ended a round of bidding, and whispers could be heard among some bidders about the competency of a rival.

Sayler, the county treasurer, said such commentary is unusual and might cause her to issue warnings against it next year.

"This year was the liveliest I've ever seen it," Sayler said.

One of the bidders, Tom Beckius, of Maxon LLC in Lincoln, Nebraska, said the tension in the room was caused by the more aggressive bidders.

“The sale is large enough for everyone to be able to invest their money in a way that maximizes our returns,” Beckius said. “But some people would rather buy the entire sale than be willing to share, so that’s where the conflict comes from.”

Beckius is a commercial real-estate broker and land developer. In addition to those activities, he invests in tax certificates — sometimes called tax liens, or tax-lien certificates — through Maxon LLC. The company sends buyers to sales in multiple states and also buys certificates through online sales, which some counties offer.

Maxon LLC is part of a broader industry of tax-certificate investors. The industry has a trade group called the National Tax Lien Association.

“There are large corporations and even national banks that invest in tax certificates,” Beckius said. “It’s everybody from the biggest investment companies in America, to a mom and pop who want to invest their dollars and make a decent return.”

Somebody who counts himself among the latter group is Kent Knock, of Rogue River, Oregon. He is a retired chemist with a degree from the South Dakota School of Mines & Technology and a sister who lives in Rapid City. He’s been buying Pennington County tax certificates for many years as a way to grow his retirement account.

Like Backius, Knock was perturbed by the low bidding at the Dec. 16 auction.

“It looks like enough people have figured this out so that it’s not profitable for me to come from Oregon to do this activity anymore,” Knock said afterward.

Yet it also sounded like he might have a hard time staying away. He enjoys studying the other bidders and forming opinions about their motivations and strategy. That atmosphere is part of the allure of a tax-certificate sale.

“In addition to the interest, you get a little bit of entertainment,” Knock said.

“A tax sale, no matter where it is,” he said, “is always full of characters.”

Some tax notices sent out recently by Pennington County were misprinted, the Auditor's Office announced Tuesday.

Bidders raise their cards at the Dec. 16 tax-certificate sale in Pennington County's Administration Building in Rapid City, while Treasurer Janet Sayler and her chief deputy, Annette Brant, preside over the sale.