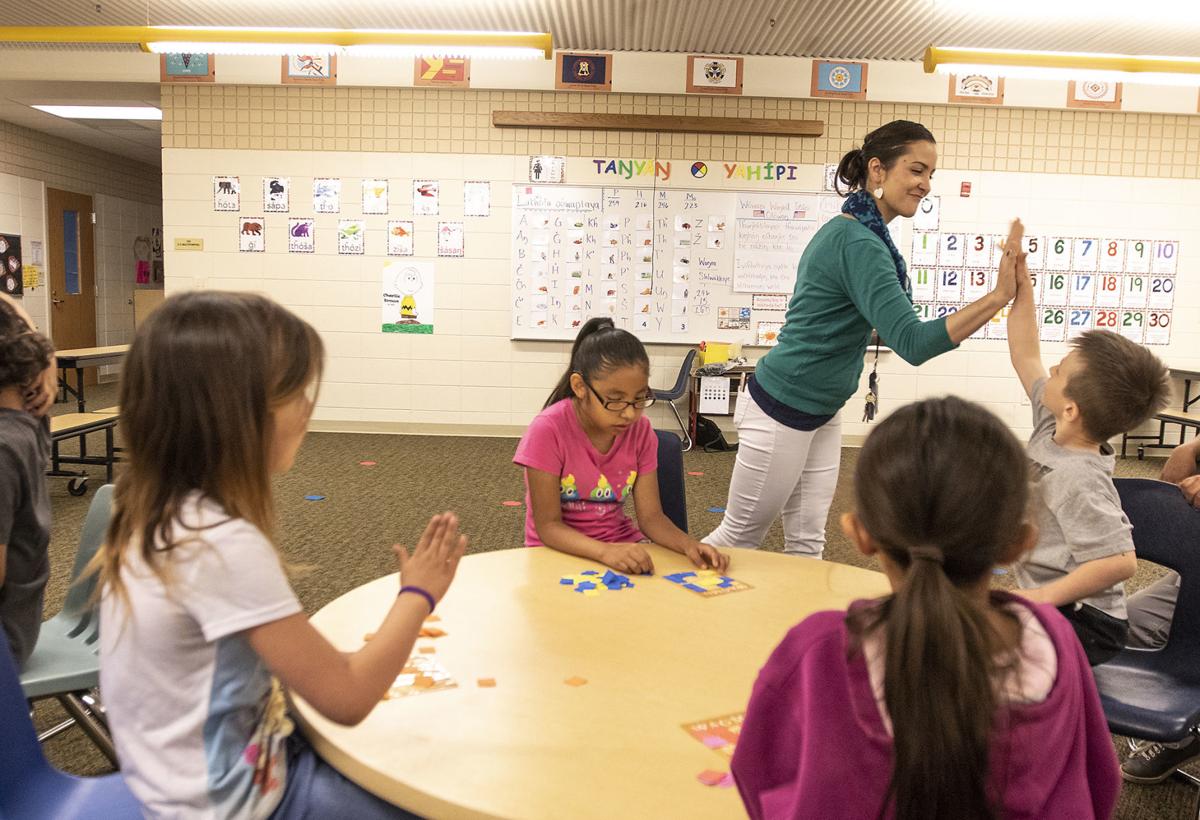 Savannah Greseth leads a Lakota immersion class at General Beadle Elementary School on Thursday. The class of second-graders comprises Native American and non-Native students and meets once every four days. 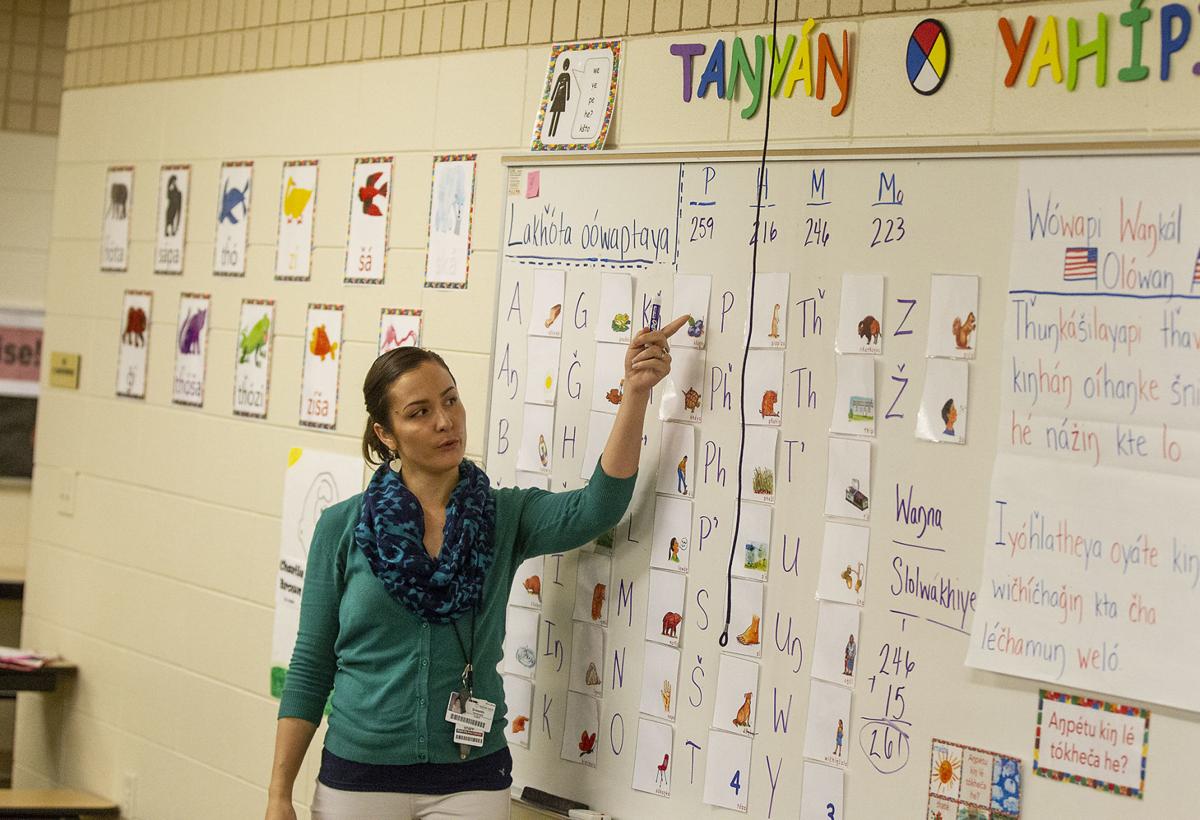 Greseth leads students in reciting the Lakota alphabet at the beginning of a class on Thursday. 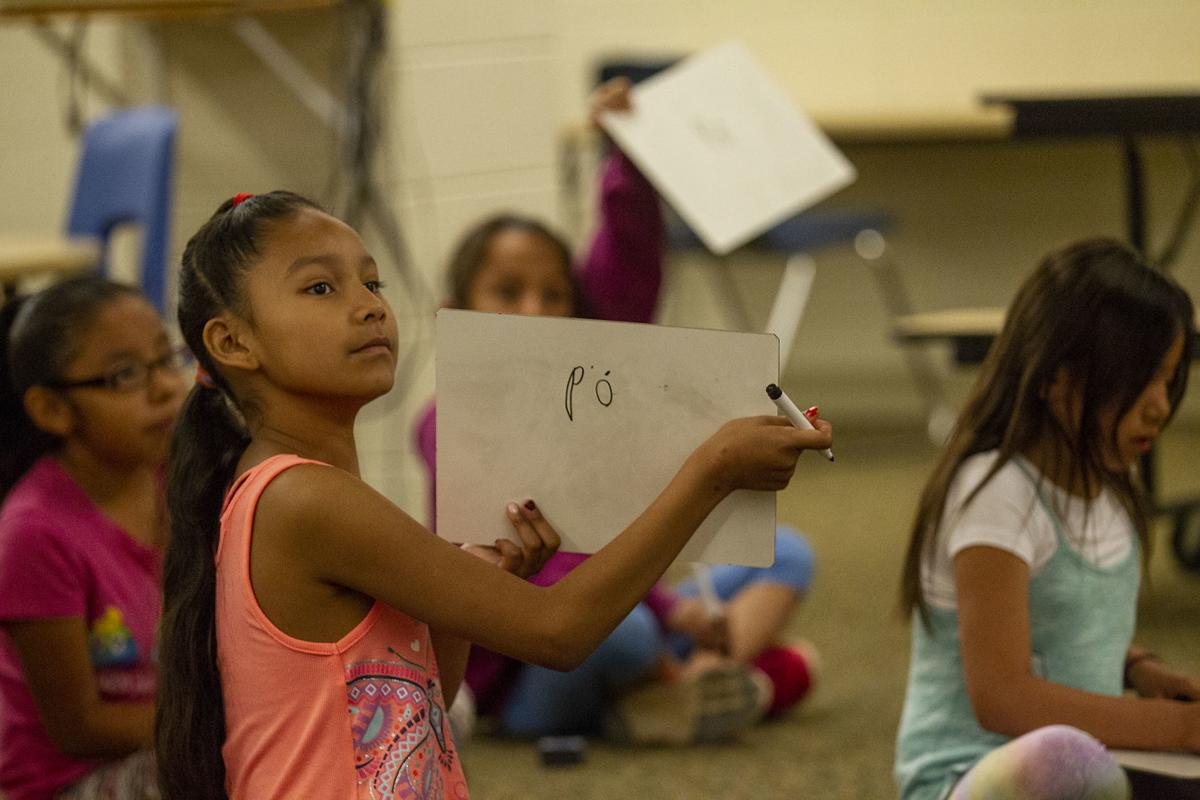 Students use erasable boards to write letters from the Lakota alphabet. 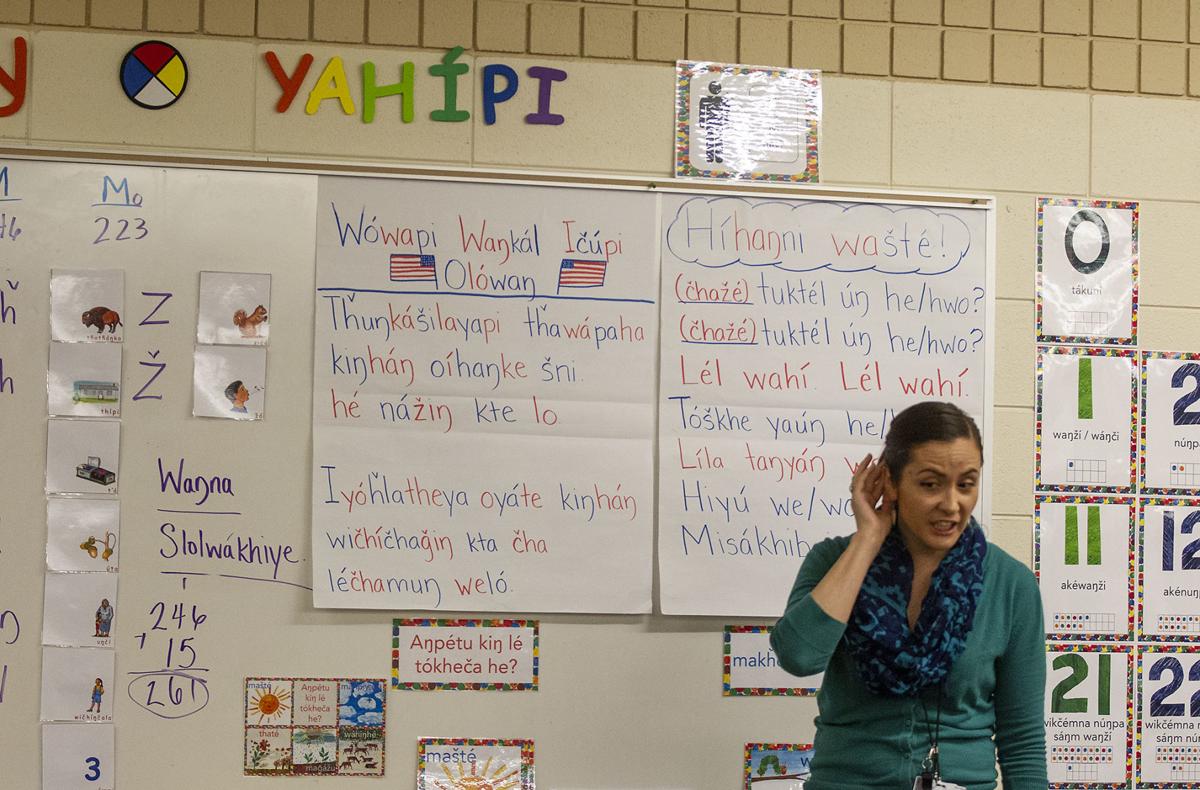 Greseth begins the class by counting to 15 in Lakota with the second-grade students. Greseth sees the class once every four days. 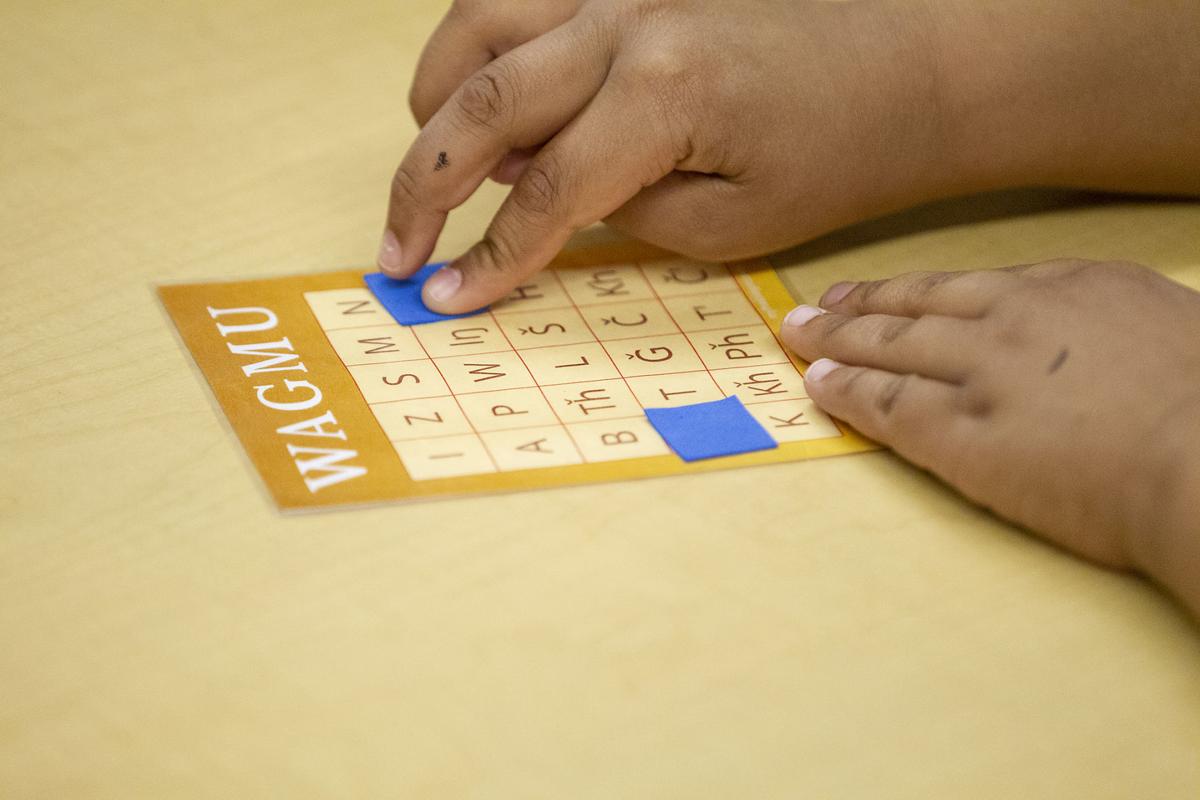 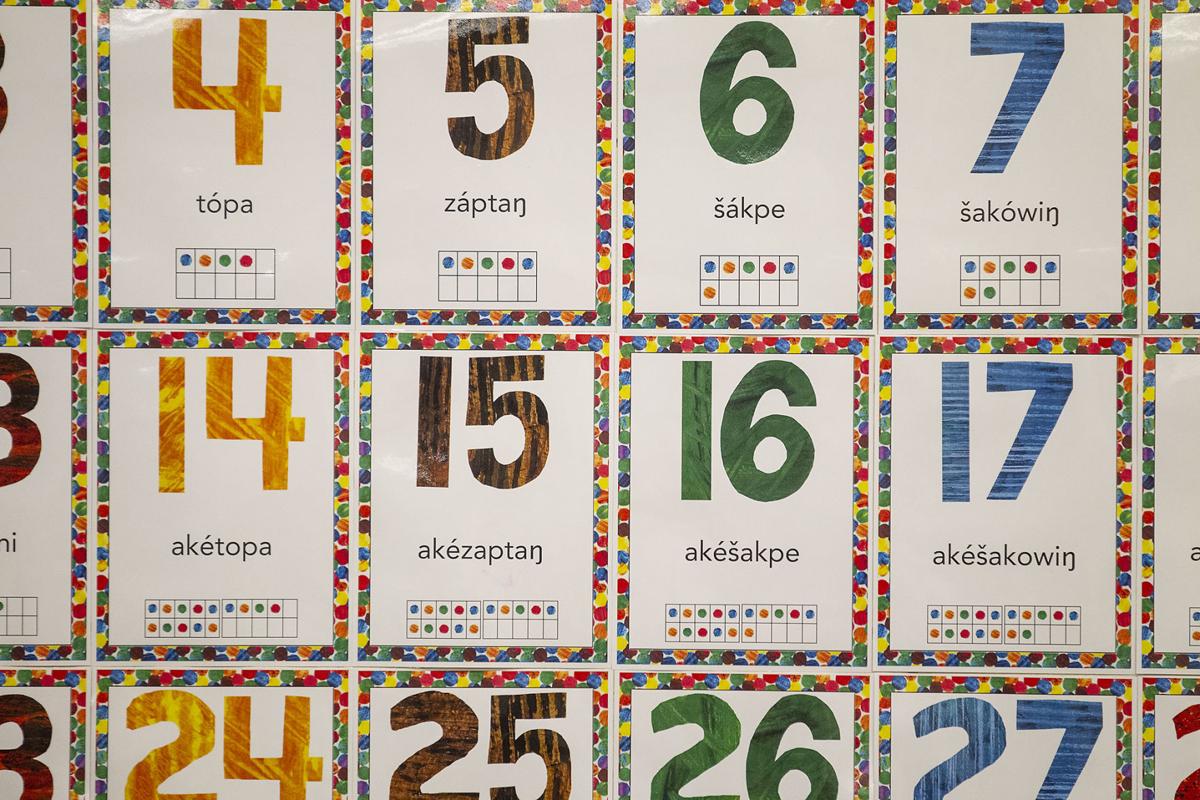 Numbers with their names in Lakota are displayed on the wall of Greseth's teaching space.

The children speak in Lakota. Their teacher, Savannah Greseth, walks the aisles of seated second graders, counting to 15 with them. "Wanji, núnpa, yámni." Only when she prepares a short video does a child speak up in English.

"Can I turn off the lights?" asks a student.

"Huh," or "yes," Greseth responds. The student scampers up to hit the lights, and the video starts. Children softly pat hands on the carpet and sing along with the teacher on the screen, who sings Tȟawápaha Olówaŋ or the "Lakota Flag Song."

So opens the Lakota Immersion class at General Beadle Elementary School in Rapid City. The class is a year old. Next year, Greseth will move to full-time with her own classroom. But there's nothing new about speaking and singing in Lakota.

Around a poster of Charlie Brown pasted on the hallway space of the converted classroom, flags of the nine Sioux nations in South Dakota line the wall. Sometimes the kids point up to tell Greseth which tribe their family comes from. The class comprises Native American and non-Native students.

"They get a sense of pride that they get to share their background knowledge," said Greseth. "Some kids have said 'Lakota' is their favorite class."

Most don't come from Lakota-speaking homes.

"Some will come in knowing a word or two."

After the movie, the white boards come out, and Greseth sounds out letters.

The children scribble "Ys" on the boards and hold them up for approval.

Next, the children move to BINGO or WAGMU. It's a game Greseth invented.

"It just has the right amount of letters and," she claps her hands, indicating syllabic stress, "bin-GO and wag-MU."

"Same amount of squares. Nothing too special."

Students can enroll in Lakota language at many colleges from the University of South Dakota to Sitting Bull College. On Pine Ridge, students learn Lakota, too. The Lakota classes offered in public schools in Rapid City include an elective at North Middle School and a language class at Central High School. But when Sarah Pierce took over last summer as the city's director for Title VI, which funds education programs for Native American students, she wanted to implement language programming more regularly at the elementary level.

"I knew all about her expertise in this and asked if she'd be willing," Pierce said.

Both Pierce and Greseth are enrolled Oglala Lakota. Pierce grew up near Rockyford and took Lakota at Red Cloud Indian School (where she met Greseth), but she envies the instruction students at General Beadle receive from Greseth.

"They're learning the foundation of the language," Pierce whispers, while the student sound out letters with their teacher, who uses non-verbal cues such as opening her eyes wide when a student's answer surprises her.

Greseth loves language. She received degrees at Sisseton Wahpeton College and Black Hills State University and a Lakota Language certificate from Oglala Lakota College. At Central High School in Rapid, she also took French and Spanish. But her study of Lakota — she's learned from teachers and elders at language programs from Pine Ridge to Standing Rock — began at age 6.

"My unci, or my grandma, she speaks some (Lakota), but she went to the boarding school so not a whole lot," Greseth said.

Boarding schools, as part of assimilation, forbade and punished children speaking in their native language. Today, Lakota is considered "critically endangered." The Lakota Language Consortium in 2016 reported that 2,000 first-language speakers were alive, down two-thirds from a decade earlier.

But at General Beadle, and many schools, efforts are underway to preserve the language. It's more than just learning the diacritics and glottal stops (which creates a popping sound), but values.

"We learn the values of wówačhiŋtȟaŋka, or respect, and wóčhaŋtet’iŋze, or courage, and what that looks like from a Lakota lens."

"Lakota is a world language," Greseth said. "And it should be valued as such."

Lakota has no official orthography, so Greseth uses what she calls "user-friendly" spellings from the Lakota Language Consortium. Materials come packaged with games on the iPad, flash cards, and laminated posters of animals with names highlighted.

This summer, preparing to teach Lakota full-time in the fall (she currently spends half her day in the Jobs for Graduates program at North Middle School), Greseth plans to deepen her curriculum with traditional Lakota stories. She said her own children are even learning, slowly.

The other students sit four to a table and reverently wait the next sound.

Students who have the "g" sound quickly place markers over the letter.

At the end of class, high school seniors arrive in their graduation gowns to high-five students for the annual graduation walk, trotting past the sign Greseth had posted on the wall of her makeshift classroom: "Tanyán Yahípi."

"It means 'welcome,'" Greseth said. "Literally it says, 'It's good that you're all here.'"

Savannah Greseth leads a Lakota immersion class at General Beadle Elementary School on Thursday. The class of second-graders comprises Native American and non-Native students and meets once every four days.

Greseth leads students in reciting the Lakota alphabet at the beginning of a class on Thursday.

Students use erasable boards to write letters from the Lakota alphabet.

Greseth begins the class by counting to 15 in Lakota with the second-grade students. Greseth sees the class once every four days.

Numbers with their names in Lakota are displayed on the wall of Greseth's teaching space.