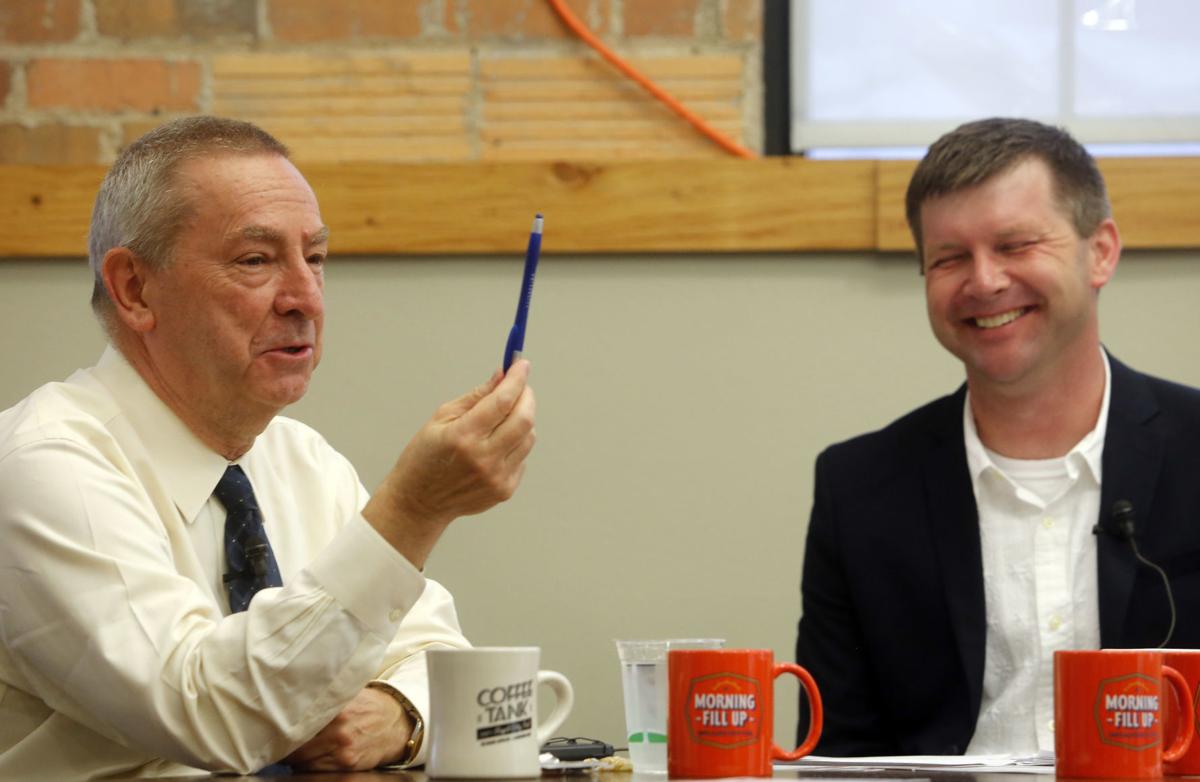 Nigel Lockyer, left, director of FermiLab in Batavia, Illinois, talks with Matt Ehlman, co-founder of The Numad Group, during Friday's installment of the Morning Fill-Up speaker series at The Garage in downtown Rapid City. 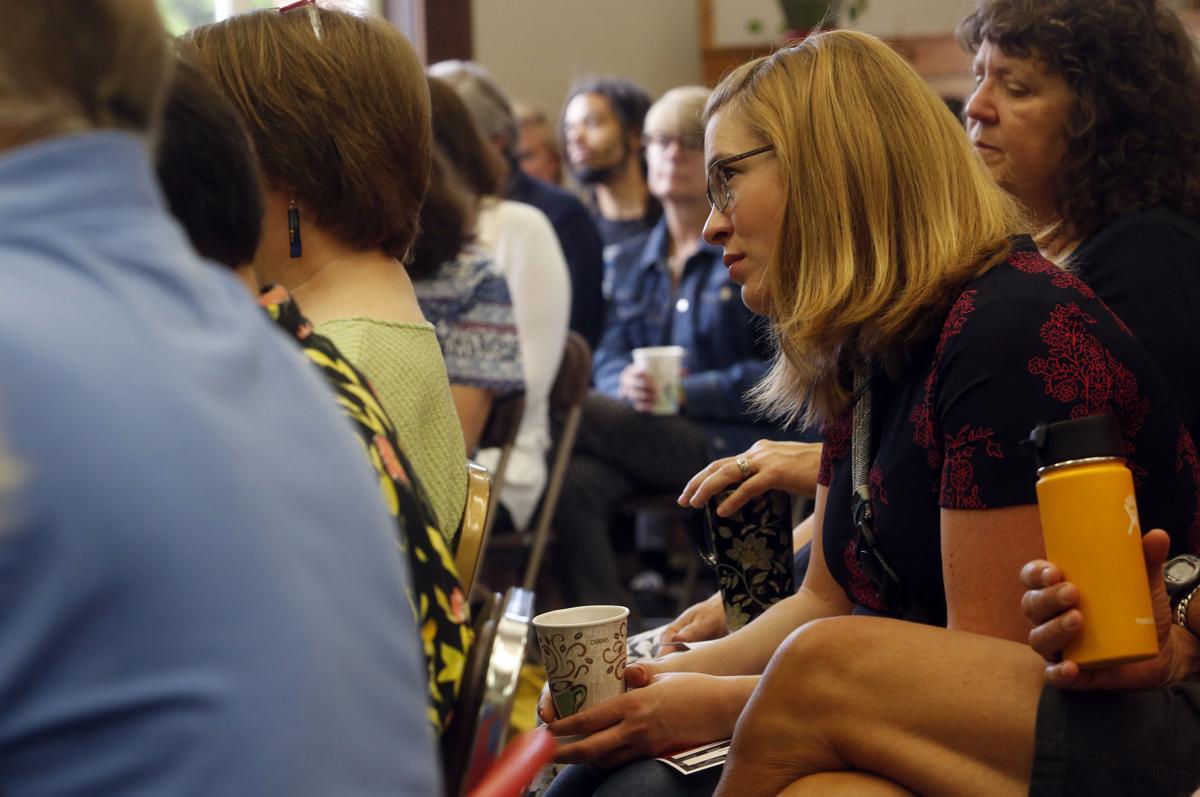 Audience members listen to a public conversation with Nigel Lockyer, director of FermiLab. 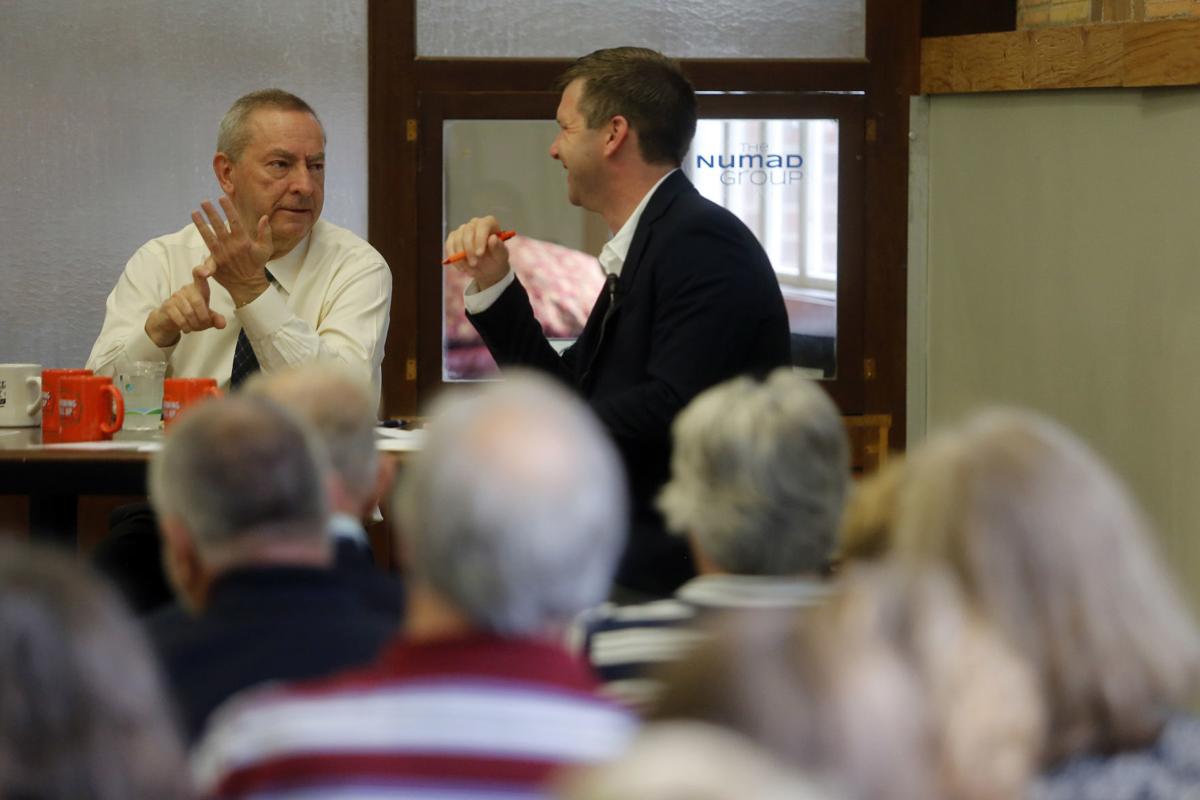 There’s a helpful way to conceptualize the science experiment that is being prepared deep underground in the former Homestake gold mine, Fermilab Director Nigel Lockyer said Friday in Rapid City.

“Particle accelerators,” he said, “are basically microscopes. They allow us to look at small things.”

In this case, the particle accelerator is at the Fermilab in the Chicago area, and the small things — the very, very small things — are neutrinos, which Lockyer said are a million times lighter than electrons. Beams of neutrinos will be shot 800 miles through the earth from the accelerator at Chicago to giant detectors underground in the old mine at Lead, giving scientists a chance to "look" at the mysterious particles.

Lockyer, a particle physicist, was the guest Friday morning for Morning Fill-Up, a free public speaker series sponsored by The Numad Group and The Bush Foundation and hosted at The Garage co-working space in downtown Rapid City. The event was held one day prior to Neutrino Day, a full day of neutrino-themed public activities in Lead.

The experiment Lockyer spoke about is known as the Deep Underground Neutrino Experiment (DUNE). It will be housed in the Long Baseline Neutrino Facility (LBNF), which will have its South Dakota component at the Sanford Underground Research Facility (SURF) in the former Homestake mine. It’s a billion-dollar international collaboration, and it’s described as the largest particle physics project ever built in the United States.

When the experiment is ready to begin in 2026 or 2027, Fermilab will shoot a beam of neutrinos at a downward angle through the ground. The neutrinos will pass through the earth, without the need for a tunnel, and will reach a maximum depth of about 30 miles before ultimately reaching a gargantuan set of liquid-argon containers that will be 4,850 feet underground at the old Homestake mine in Lead. Placing the containers deep underground will protect them from cosmic rays and other above-ground interference.

The argon will act as a detector, allowing scientists a better-than-ever opportunity to study the mass of neutrinos (which is unknown), to probe the role of neutrinos in the universe, and to perhaps even detect neutrinos escaping an exploded star or black hole, among other potential research outcomes both anticipated and unanticipated.

Why is it important to study neutrinos? Lockyer had a helpfully simple explanation for that, too.

“The world is made out of this stuff,” he said. “There’s so many, they must be important.”

Neutrinos are fundamental particles, which means they cannot be broken down into smaller bits. They are the second-most abundant particles in the universe, after photons (light particles). Lockyer said neutrinos pass unnoticed through matter all the time — a trillion of them pass through a human thumbnail every second, he said. The DUNE experiment will use liquid argon to detect neutrinos, because a neutrino yields a distinctive signal when it bumps into an argon atom’s core.

Before the experiment can begin, about 800,000 tons of rock must be excavated from deep in the Homestake mine. That rock will be carried out of the mine by a conveyor that will dump it in the Open Cut, a pit left over from the Homestake mining era that is 1 mile wide and 1,250 feet deep. The giant argon containers — consisting of four modules, each as tall and wide as a four-story building and nearly as long as a football field, with a collective capacity of 70,000 tons — must also be assembled.

Lockyer said the experiment will place Lead and the Black Hills in rarefied scientific air.

“You’re going to be sitting in the middle of something unique happening in the United States and the world with the neutrino experiment,” he said. “It’s going to take a number of years to get built and start, but it will be the epicenter of something important in science. It will bring people from all around the world to this region.”

Fed up with DC? It's 'our fault as voters,' speaker says in Rapid City

After watching collegiality decline in the nation's capital during his decades of work there, Stephen Ryan has some tough love for the people …

LEAD | For the past 17 years, shovels, safety goggles, tramway cars and other remains of the defunct Homestake gold mine lingered in a closed-…

In the air and underground, Brits honored in Rapid City

British air power and science were feted Tuesday in Rapid City, where talk of aerobatic jet maneuvers mixed with discussion of a deep undergro…

Nigel Lockyer, left, director of FermiLab in Batavia, Illinois, talks with Matt Ehlman, co-founder of The Numad Group, during Friday's installment of the Morning Fill-Up speaker series at The Garage in downtown Rapid City.

Audience members listen to a public conversation with Nigel Lockyer, director of FermiLab.