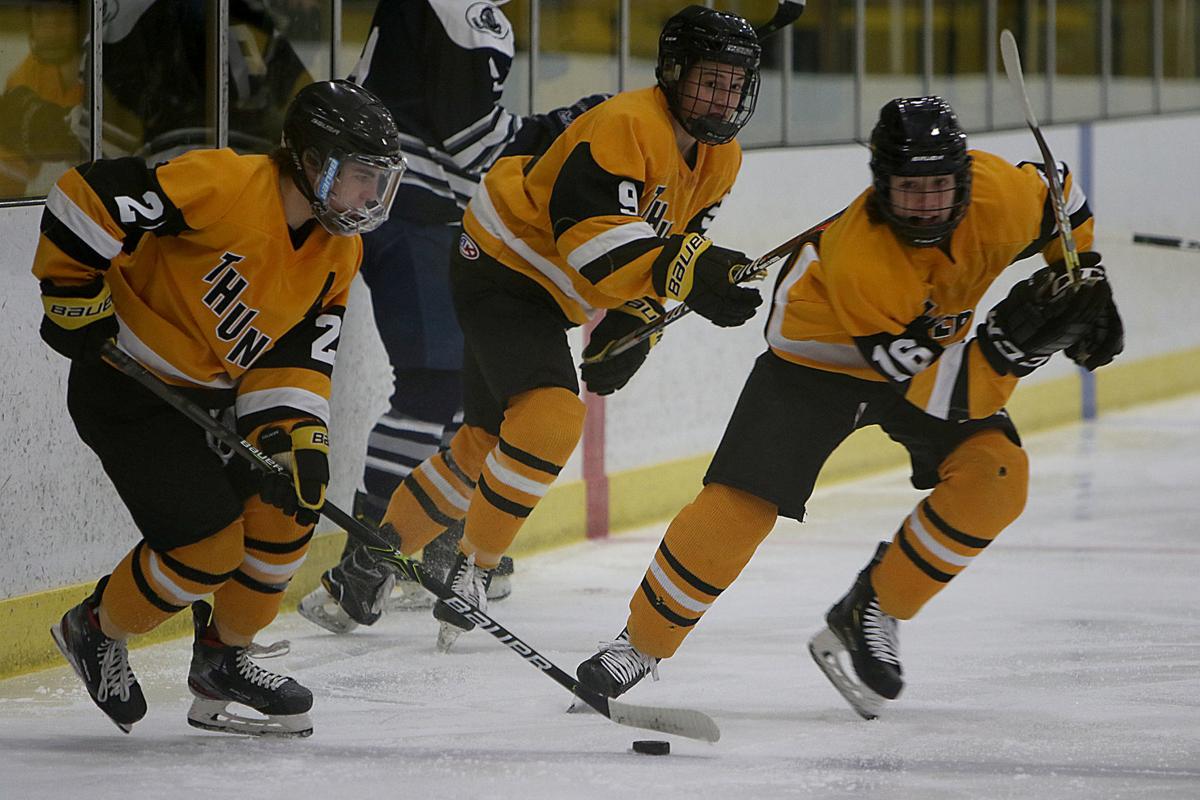 Rushmore Thunder forward Derrick Brown Jr. carries the puck into the Mitchell Marlins’ defensive zone as Miles Retzer (16) and Kael Delzer (9) charge into the play during their SDAHA boys hockey game against the Mitchell Marlins on Sunday at the Thunder Dome in Rapid City. The Thunder scored three quick goals and went on to beat Mitchell 5-3. 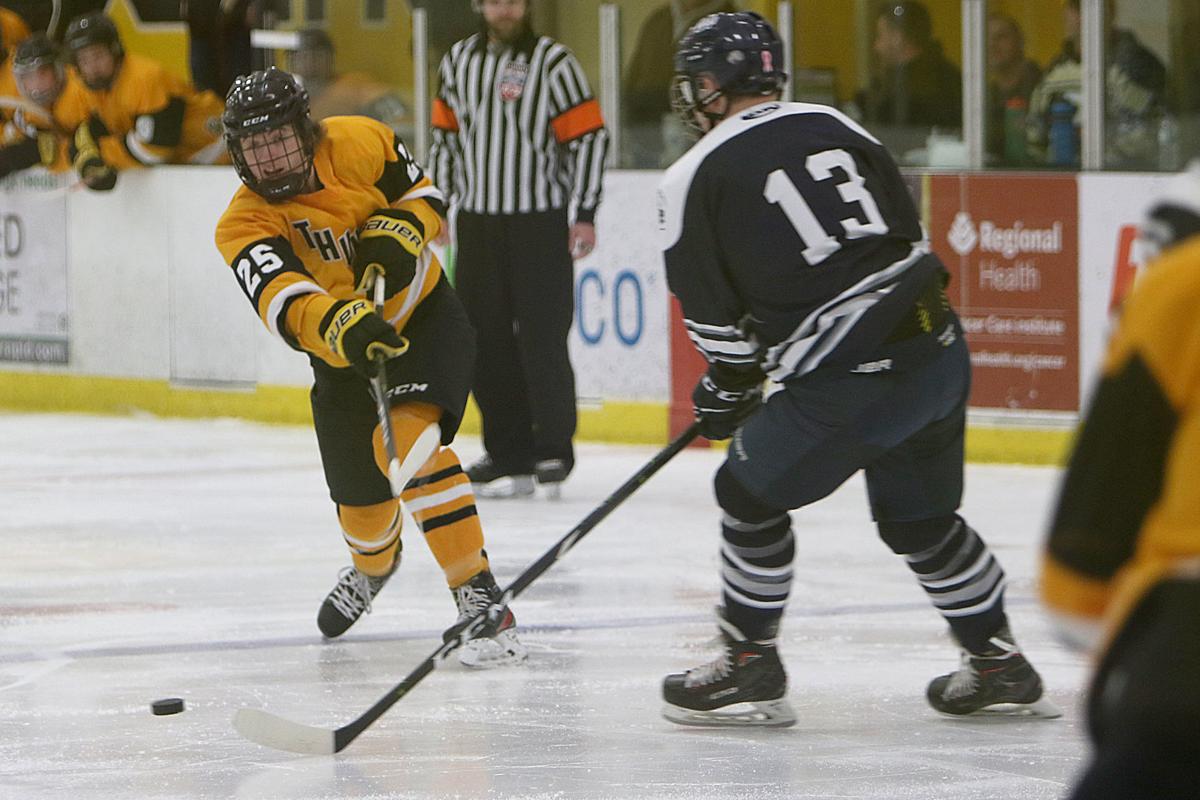 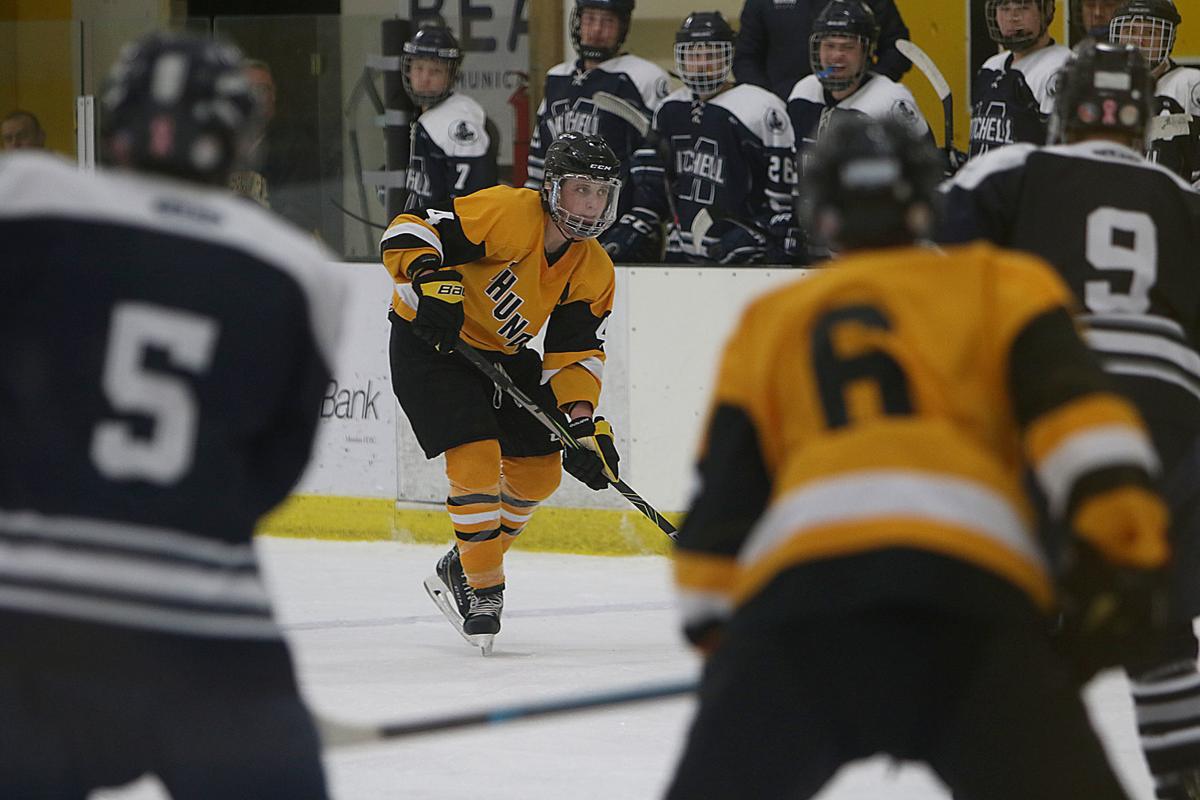 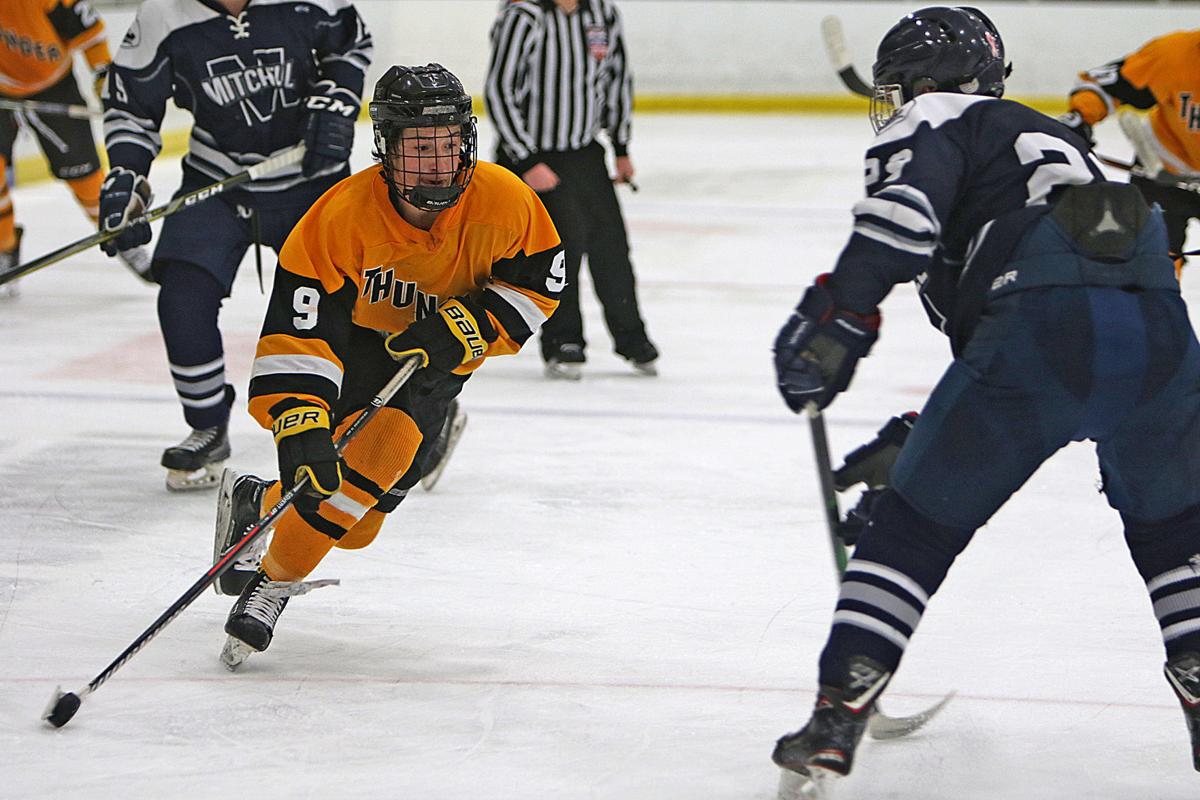 An early flurry proved to be the difference maker as the Rushmore Thunder jumped out to a quick lead, withstood a Mitchell Marlin late first-period comeback and controlled the game thereafter in posting a 5-2 win in South Dakota Amateur Hockey Association boys hockey action Sunday afternoon at the Rushmore Thunder Dome.

Stinging from a home ice overtime tie with the ninth-place Marlins on Saturday night, the third-place Thunder came out flying, lighting the lamp three times in the first 5:17 of play.

Derrick Brown Jr., ignited the scoring blitz with his third goal of the season on the very first Thunder rush. Set up by a crisp crossing pass from Kael Delzer on a 2-on-2, Brown drilled a wrister inside the far post 43 seconds into the contest. In addition to Delzer, Miles Retzer earned a helper as well.

Just 1:29 later, Retzer lit the lamp, his second goal of the year, bouncing the puck off a defender from behind the net. Delzer and Seth Stock assisted.

Three minutes later, Delzer added his first goal of the game to his two assists converting a 3-on-2 opportunity to put the Thunder up 3-0, with assists to Retzer and Stock.

“We came out hard today, moved the puck well and put the puck on net. Last night’s tie really sparked a fire under us and we got at it early today,” Kael Delzer said. “On the first goal we got a nice uncontested shot, the second one we were grinding behind the net and then on my goal I was able to find the top corner.”

The ease of the early success, however, came at a price. Being overly aggressive in the offensive end resulted in being caught up ice on three occasions, two of which Mitchell converted into breakaway goals - one by Nickolas Robinson and the second by Eric Biggerstaff - to close the gap to 3-2 through one period of play.

While conceding that positioning played a role, Thunder coach Brendon Hodge pointed out that, due to injury and illness, only four defensemen suited up and double-shifts took a toll.

“We only had four defensemen today, so they were playing tired at times," Hodge said. "But I have to give credit to Mitchell. They played well today and had a great hockey weekend. There were a couple times where you are sitting there going ‘Oh! Oh!’ but though the guys were tired they were trying their best.”

Three Rushmore penalties following the two Marlin goals may have been attributable to weariness as well.

“I tell the guys that if it’s a good hard-working penalty, just go to the box and we will kill it,” Hodge said. “If it’s a selfish penalty those are the ones that end up in the back of your net, so we talked about in the locker room. The guys came out in the second and third periods and played solid hockey.”

Though the Thunder were playing solid positional hockey and passing well, Delzer’s second goal of the day - and his ninth of the season - at the 5:36 mark restored the Thunder's two-goal lead.

“That goal was a big goal for us,” Delzer said. “If they had scored, it would have been a tie game. So to build the lead again really helped us for the rest of the game. Seth (Stock) has a low hard shot from inside the blue line and I had my stick out and tipped it in.”

A Duncan Chisolm power play goal, his third goal of the season on a blast from the right point, extended the Rushmore advantage to 5-2. Mitchell's short-handed goal late in the second period closed out game scoring, as neither team scored in the third period.

“Four of our starters sick with the flu and we had to pull up some guys from the JV to help us out, so we had to fight through that,” said defenseman Seth Stock, a constant presence on the ice. “Coach told us after the first period that he was very proud, but that we couldn’t let up off the gas pedal, and we kind of mellowed out and did our responsibilities on the ice. We moved the puck very well today, connected the dots and got the W.”

Goalie Abraham Partridge picked up his sixth win of the season staving off 23 of 26 shots.

Not always pretty perhaps, but a big win nonetheless before the Thunder (6-1-1-1) take to the road next weekend meeting Huron at 7 p.m. MST Friday night and a pair of games at Yankton at 6:30 p.m. Saturday and 12 p.m. Sunday.

U.S. Attorneys in Rapid City have dropped two criminal cases that involved the same FBI agent who's been transferred to another office.

The Rapid City Police Department is searching for the suspect or suspects who stabbed two men Saturday night, according to a news release.

The armed robberies of a hotel and convenience store Wednesday evening may be linked to the same suspects, according to the Rapid City Police …

Rushmore Thunder forward Derrick Brown Jr. carries the puck into the Mitchell Marlins’ defensive zone as Miles Retzer (16) and Kael Delzer (9) charge into the play during their SDAHA boys hockey game against the Mitchell Marlins on Sunday at the Thunder Dome in Rapid City. The Thunder scored three quick goals and went on to beat Mitchell 5-3.