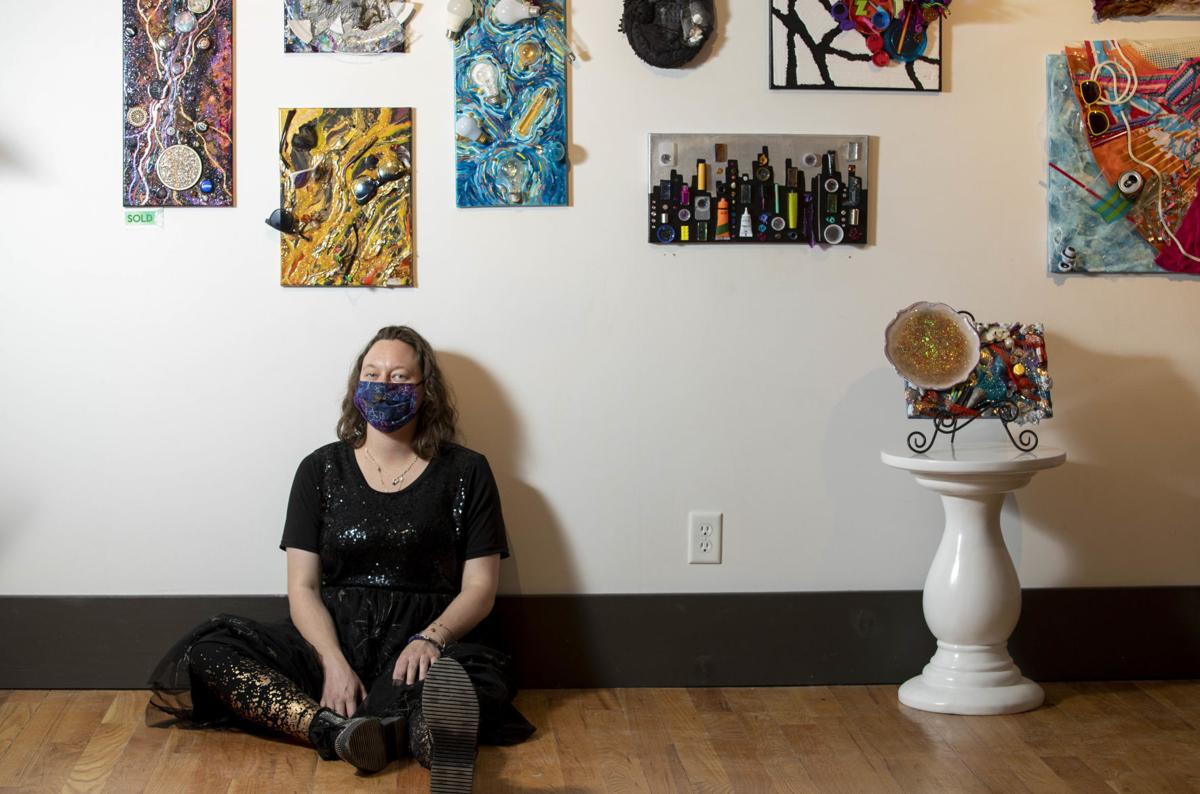 Savanna Schara sits by pieces of art she created from recycled materials for her art show titled Avant-Garbage at Hippie Haven on Thursday in Rapid City. Schara's show opens Saturday and will be on display until April 24. 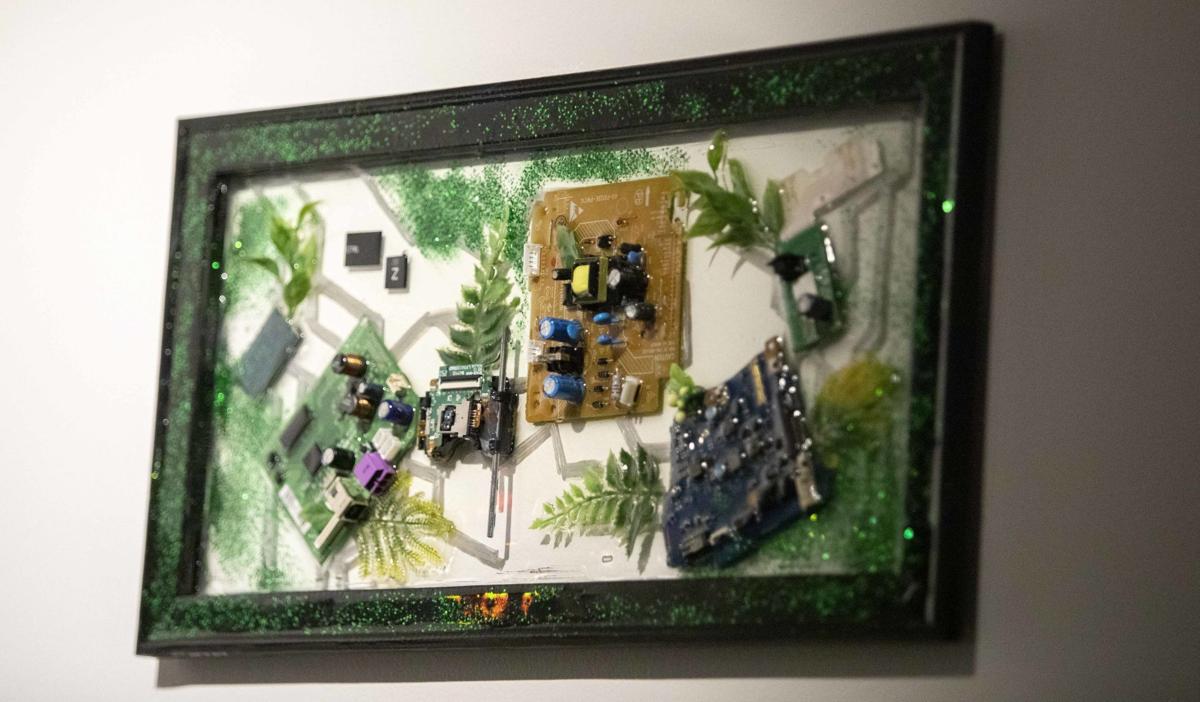 A piece titled "Circuited Energy" is made from pieces of circuit boards. 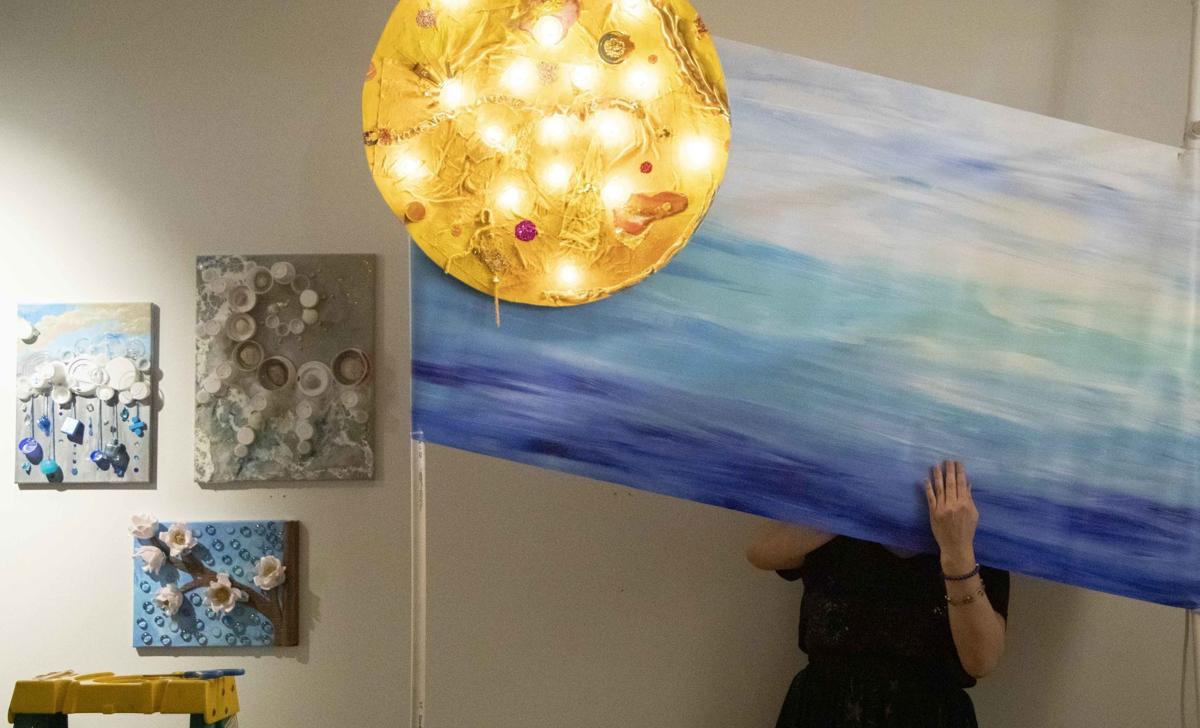 Savanna Schara sets up an Instagram booth for her art show. 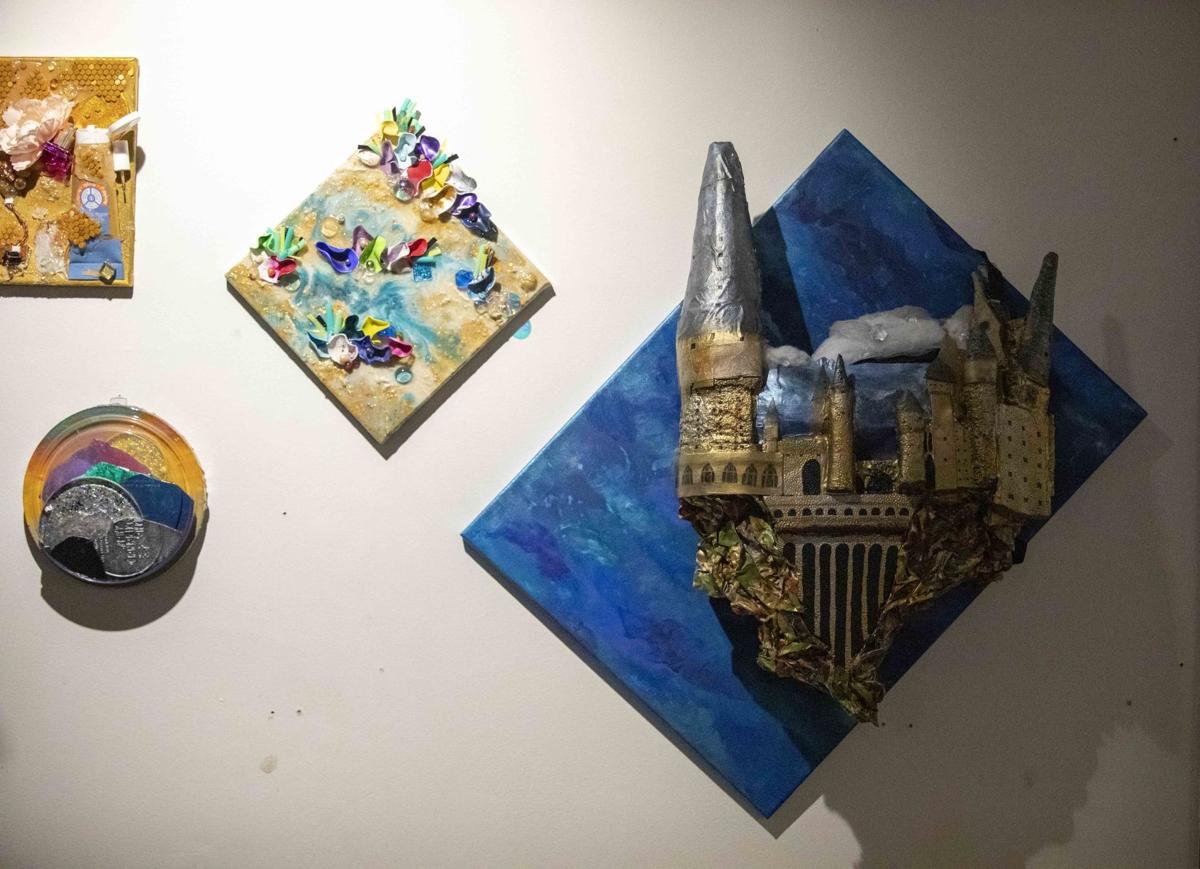 Savanna Schara's art is made from recycled materials.

Avant-Garbage will be on display through April 24 and can be viewed during store hours, 10 a.m. to 6 p.m. Monday through Saturday. The show will close with a demonstration by Schara about transforming aluminum cans into a butterfly craft, and a drawing to win a piece from the Avant-Garbage collection.

Schara's exhibit incorporates items that are no longer functional into each art piece. Empty plastic bottles, bent sunglasses, broken dishes and more are used in 49 artworks in the collection. Avant-Garbage is whimsical but carries a deeper message. The Rapid City artist said she wants to raise awareness about humans’ impact on the Earth and how they treat the planet.

Schara is a graphic designer who works in Ellsworth Air Force Base Support Squadron’s marketing department. She’s also a hobby photographer and multimedia artist who launched her own website and blog, Crazy Pants Creative. Schara’s mixed media depiction of historic Rapid City adorns an electrical box at the corner of West Boulevard and Main Street, and her work was included in the 2020 Community Art Show at Matthews Opera House.

Schara’s experiments with garbage art began about a year ago, when a co-worker offered her some CDs to paint on. Schara began breaking the CDs and incorporating them into her art. Her friends and family now know that if Schara finds something interesting in their garbage, she’ll take it for a future art project.

“At this show, I’m going to dedicate it to my garbage collectors,” Schara said, laughing. “My mom and my sister have saved garbage. I have all my co-workers saving garbage.”

She uses an assortment of plastic items, which require an estimated 450 years to decompose in a landfill, along with objects that may not be as well known for being pollutants.

“I like to try to focus on things that are less common like light bulbs. You use them every day, but you don’t throw them away every day. You don’t think about them going to a landfill because you don’t use as much of them,” Schara said.

Putting garbage into art started as a creative challenge. Schara's art evolves as she educates herself about pollution.

“It turned into learning about the waste I put into the world and … how I can put it into art so it doesn’t go to landfills. I learned how long things last in landfills. That’s such a devastating thing to learn,” Schara said. “With all the things I’m using as art, I’m researching to see where it ends up after people use it.”

Many pieces in the Avant-Garbage collection are inspired by the Great Pacific Garbage Patch, a conglomeration of litter in the north Pacific Ocean.

“That’s an area in the sea where all of the waves trap garbage together and it’s really hard to get to, and I reference that in a lot of my pieces. There’s a lot of ocean feeling because of that specific information I have learned,” Schara said.

For the Avant-Garbage show, Schara chose to conserve paper by putting her artist’s notes and explanations about each artwork online. Viewers can use a QR code to access more information about the art. Schara also is setting up an Instagram photo booth at the show that lists facts about garbage. The public is invited to take photos in the booth and physically put themselves into the art, she said.

The Rapid City Police Department is investigating an unattended death after a woman's body was found last week on Maple Avenue.

A woman was transported to the hospital Wednesday morning following a car crash at the intersection of Quincy and Fifth streets.

Your Two Cents for April 28

Money talks. We know for sure as RC area sellers are selling homes at astronomically high prices to out-of-state buyers, not giving the local …

Your Two Cents for April 29

Savanna Schara sits by pieces of art she created from recycled materials for her art show titled Avant-Garbage at Hippie Haven on Thursday in Rapid City. Schara's show opens Saturday and will be on display until April 24.

A piece titled "Circuited Energy" is made from pieces of circuit boards.

Savanna Schara sets up an Instagram booth for her art show.

Savanna Schara's art is made from recycled materials.