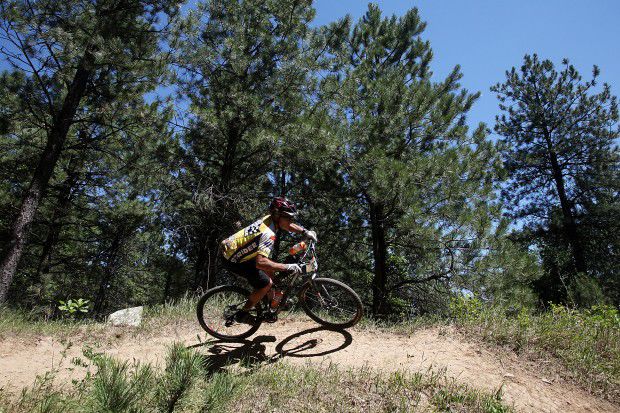 Todd Fenster races in the Black Hills Back 40 in 2012. The race will likely not happen this year after U.S. Forest Service officials did not approve their use permit. 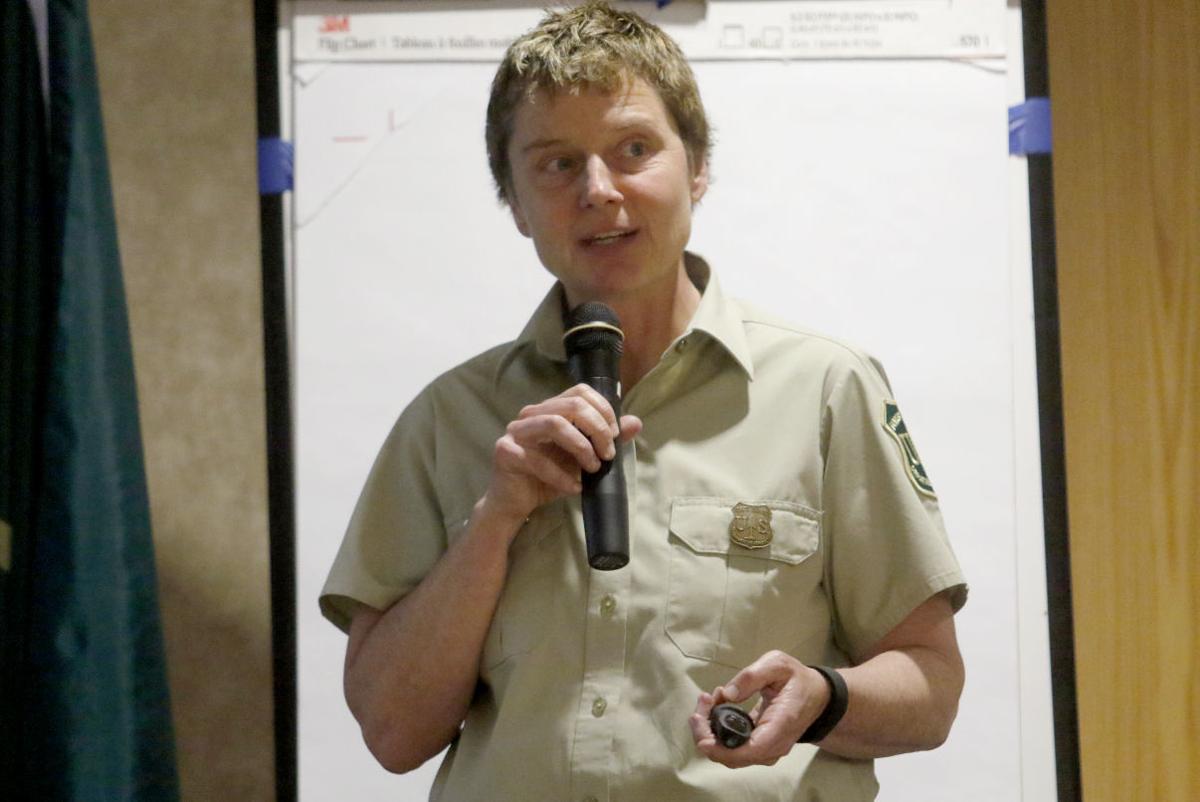 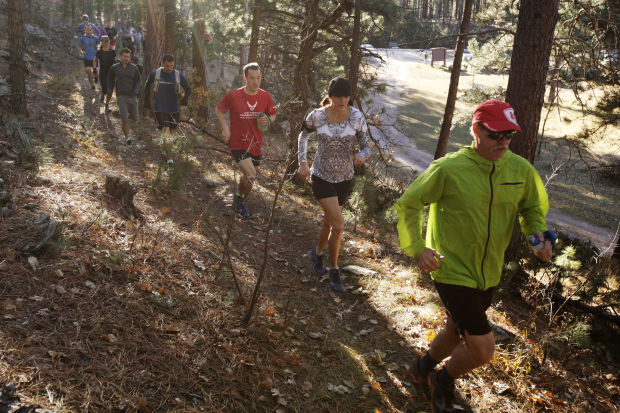 Some trail running races in Black Hills National Forest are having to be changed or canceled after failing to get permits from the forest service.

Some long-standing mountain bike and trail running races — including the popular Black Hills Back 40 and Victoria Secret race held by the Black Hills Runners Club — are being canceled or are left in limbo after officials from the Black Hills National Forest Mystic Ranger District did not approve or changed some special use permits this year.

Organizers of the races say they are trying to work with the Forest Service to make sure those races happen, but acknowledge some races may need to be canceled.

Race directors say they are being told the races can't happen on trails that aren't within the Forest Service system. But Forest Service officials say active timber operations are happening in some race areas and event locations may need to be changed if they want to proceed.

Ruth Esperance, the district ranger for the Mystic Ranger District, said when the Forest Service realized that some of these recreation events were overlapping with active timber work they began working with groups to change race locations.

Esperance said it would be a safety issue with logging operations going on during a race, and since the Forest Service has a contract with timber companies, they couldn't change their logging plans for a race.

She added that while the denials are mainly due to safety concerns, she acknowledged that groups operating races on unauthorized forest trails is a bad idea.

"When we have a timber sale in that area, there is no reclamation work that takes place to non-system trails after that operation is done," Esperance said.

That means if a non-system trail was damaged during logging operations, the logging company would not have to restore that trail to the original condition, she said. Conversely, if damage took place on a sanctioned trail, reclamation efforts of the trail would take place.

"It would be ideal to move people to system trails because there would be a guarantee down the road that those races could take place every year," she said.

Esperance noted that some permits for races were approved on non-system trails this year. "But I do think there needs to be respect for the resource, and I don't think illegal trail building is appropriate."

Those prosecutions, according to the letter, could result in penalties of up to $10,000 in fines and six months in prison. The Forest Service then put up signs closing one popular but unauthorized trail near Johnson Siding called The View Trail.

Mountain bike groups decried the letter, but some hope emerged a month later when Black Hills National Forest officials expressed support during an advisory board meeting for the development of an evaluation process for proposals to make new trails through the forest.

That relationship appears to have soured again with the denial of the race permits.

"We felt like we were moving in a good direction with them, and then we were blindsided by some of the moves they made," Jacobs said.

It was a "complete and utter surprise" when the mountain biking and trail running community found out some permits were denied, Jacobs said.

Groups were encouraged after recent constructive conversations with Black Hills National Forest Supervisor Mark Van Every, and the Forest Service seemed to be working well with groups on a new set of trails near Sturgis at Dead Man Gulch. That trail system is in the Northern Hills District.

"We thought we were really heading in a good direction and then this happened," Jacobs said Friday. He hopes all parties can come to the table and work out plans for this year and the future.

Jacobs said the Black Hills Back 40 Mountain Bike Race and trail running race permits were denied this year, and other races are left scrambling with condition changes to permits.

The Back 40 is a single-track mountain bike race that benefits The Cornestone Rescue Mission and Pennington County Search and Rescue, and takes place near Victoria Lake Road west of Rapid City. Race director Phil Busching said the race may be dead for future years also since it is held on trails that the Forest Service says are not authorized.

"The whole purpose of the Back 40 when we created it was to make a very difficult race that would reach into remote areas," Busching said. "Make it an epic race with a vision, one you were grateful to finish."

He said it would be difficult to try and regroup and find a new course on sanctioned trails this close to registration time.  In the past five years, that race has raised $75,000 for various nonprofits in the Black Hills.

"The Forest Service needs to take the lead in helping the local community to design and create trails for the community to use instead of leaving them to their own devices and actually vilifying the people who are creating trails because nothing is getting done," he said.

Busching is calling for a non-motorized trail plan to be developed with all the stakeholders in the Black Hills. "You design them, we build them," he said. Esperance said more work is being done with groups so a comprehensive plan can be developed.

Another race that is having permitting problems this year is the Tatanka 100, a 100-mile race from Mount Rushmore National Memorial to Sturgis on the Centennial Trail.

Kevin Forrester, who helps organize that race, and said it has been been a struggle to get the section of the trail approved through the Mystic Ranger station.

"We have a district ranger who is trying to flex her muscles and must have some sort of vendetta against non-motorized trail users," he said.

Esperance denied holding a vendetta and said she "upholds her responsibility to manage the forest for all users."

The Tatanka 100 on the Centennial Trail crosses all three Black Hills National Forest ranger districts. Forrester said getting approval from Hell Canyon and Northern Hills for this year's race was "painless," but the Mystic Ranger Station was a different story.

"They’ve fought us every inch of the way, and we’re using a system trail," Forrester said.

Because the Takanta 100 has a five-year special-use permit, the race will still happen this year, though Forrester said Mystic Ranger Station officials are trying to change some of the conditions they originally approved the permit under.

One of those conditions is to take out the wooden ride-over gates that mountain bike groups built on the trail where it meets a fence. The raised wooden structures allow mountain bikers to easily travel over them, while livestock are unable to cross.

Esperance said there was a condition in the original permit that those gates be taken out after the race and reinstalled every year for the race.

"Livestock producers love them," Forrester said of the gates because some trail users can leave gates open, allowing livestock to escape. "They made us tear these things out that they didn't have to pay a nickel for."

"At this point we haven't been able to obtain a permit from the Forest Service for the Victoria Secret race as it's not all on system trails," the post said. A separate race is trying to be worked out by the group on the Centennial Trail to take its place. The Thunder Run, another longstanding trail race, was rerouted this year because of permitting problems on the original trail.

Esperance said there is more work to be done to repair the relationship between recreational users and the Mystic Ranger District, but she doesn't believe problems are insurmountable.

"It's a fallacy to think that everyone is going to get everything they want,"Esperance said about the issue. "We are open to listening and working with all the different user groups."

Want a trail in the Black Hills? New process created for proposals

Recreational trail advocates who have been frustrated by a lack of new trails in the Black Hills National Forest now have a way to make proposals.

Todd Fenster races in the Black Hills Back 40 in 2012. The race will likely not happen this year after U.S. Forest Service officials did not approve their use permit.

Some trail running races in Black Hills National Forest are having to be changed or canceled after failing to get permits from the forest service.