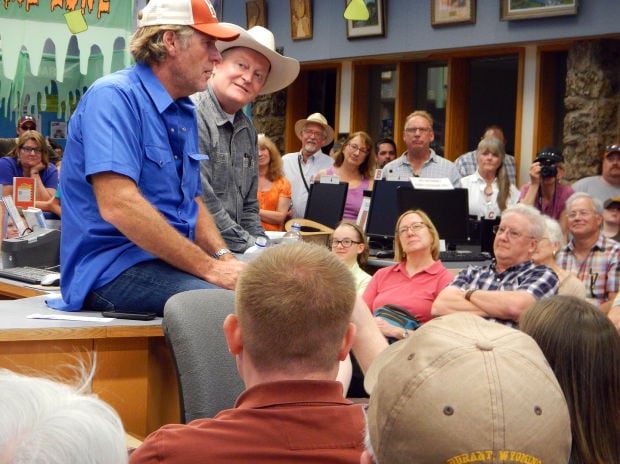 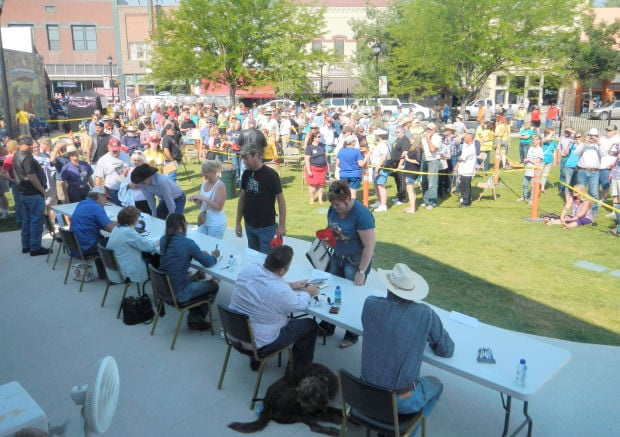 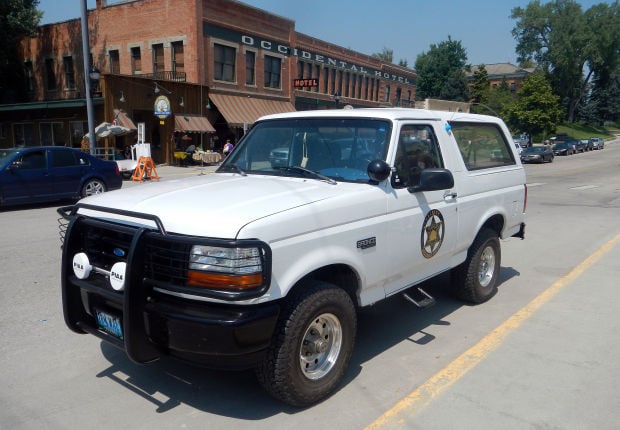 The "Bullet," driven by fictitious Sheriff Walt Longmire in A&E's series, "Longmire," was a Main Street attraction during a celebration in Buffalo, Wyo. last weekend.

The book series and now TV show are centered on Longmire, the fictitious sheriff of Absaroka County, and a cast of rough-riding characters, half of whom joined Johnson for the third annual Longmire Days celebration.

The series of books by Johnson, one of the 25 residents of nearby Ucross, Wyo., form the basis for the “Longmire” television series on A&E, which in its third season is attracting 6 million viewers weekly on Monday nights.

“All I was hoping for was to sell enough books to allow me to keep writing,” Johnson said Saturday during a pause in a 4-hour autograph session. “I never imagined it would turn into this.”

Johnson’s mystery series, set in Buffalo (near Sheridan, Wyo.) and featuring the Busy Bee Café, where Walt Longmire often drops by to have “the usual,” deals with the realities of life, love and crime in the remote regions of the American West.

Asked if he had allowed himself any luxuries since his books became best-sellers and spawned the TV series, Johnson said he was asked the same question a few months ago.

“This South African reporter asked me what I had bought myself since becoming a success — a Lamborghini, a Ferrari?” he said. “I told him that wouldn’t work real well in a winter in Ucross, but I did buy a new Carhartt.”

“What’s that?” the reporter asked.

“Oh, for the red carpet?” the reporter insisted.

Still humble, funny, friendly and always sporting a cowboy hat, Johnson spent the weekend introducing the cast, providing color commentary at a softball game touted as the Cowboys versus the Indians, and signing his name to a couple thousand books, posters, T-shirts and hats, all featuring the Longmire brand.

In his spare time, he attended an Indian powwow in Crazy Woman Square, swilled Wyoming Whiskey and Rainiers at the Occidental Saloon, and led a session titled, “So You Want to Write a Mystery,” at the Johnson County Library.

Johnson told more than 200 mystery-lovers that when his first book hit the stands, he began fielding invitations from libraries asking him to speak. When they noted they had no budget for thousand-dollar honorariums, the author told librarians he would do the deed for a six-pack of Rainier, preferably in cans.

“Do you know that there are 73 public libraries in Wyoming?” Johnson smiled. “And do you know how much librarians like bringing beer into their libraries, in brown paper bags, wrapped with packing tape?

“It looked like a heroin deal,” he said. “But I haven’t bought beer in seven years.”

Johnson said after the second or third episode of the first season of Longmire was broadcast on A&E, with the sheriff downing long-neck bottles of Rainier at the end of a long day, Wyoming bars began touting “Longmire Longnecks” while airing the show on Monday nights. The real bottlers of Rainier actually ran out of beer in the entire region, he said.

“In Wyoming, it’s like the Super Bowl on Monday nights,” he laughed. “One bar owner told me that the last show his patrons would drive in to watch was `Gunsmoke.’”

Buffalo Mayor Randy Dyess said this year’s Longmire Days attracted nearly 10,000 fans, some from as far away as Alabama, Texas and California. He said the town of 4,600 was incredibly grateful for the attention Johnson’s books had brought to the community.

“This puts Buffalo on an international stage,” Dyess said. “Longmire is an advertisement for the Western lifestyle, a place to see the mountains and see the stars.”

Dyess said the literary crowd provided the ideal visitors for his town and, even en masse and slightly inebriated, created little trouble.

The "Bullet," driven by fictitious Sheriff Walt Longmire in A&E's series, "Longmire," was a Main Street attraction during a celebration in Buffalo, Wyo. last weekend.