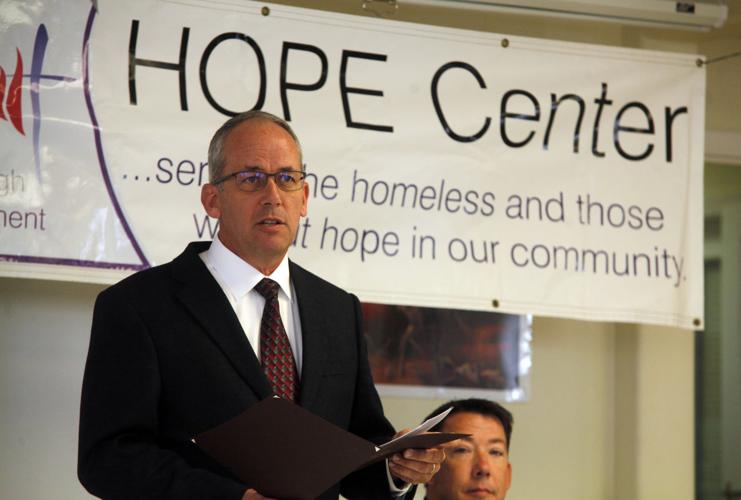 Mayor Steve Allender speaks at the HOPE Center Monday morning at a homelessness awareness event. Allender announced Monday he was allowing the placement of certain winter accessories on the presidential statues on downtown street corners. 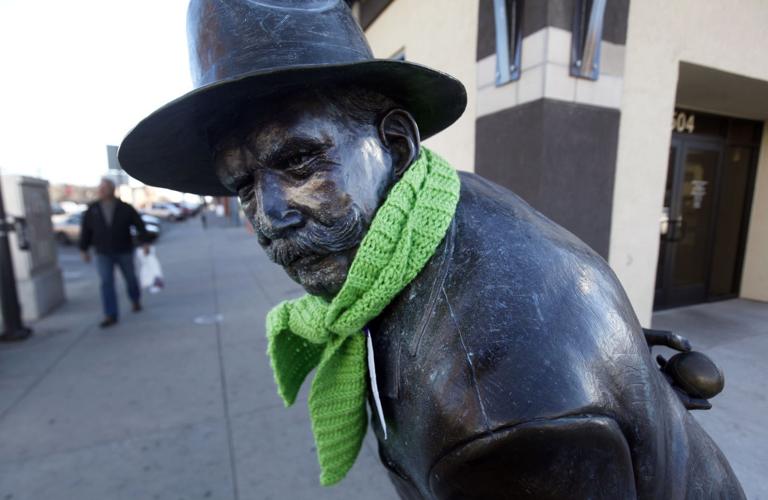 The City of Presidents may now also be considered the City with the Warm Heart.

At a press conference on Monday, Rapid City Mayor Steve Allender announced he was reversing a two-year-old city policy by allowing the placement of certain winter accessories on the presidential statues on downtown street corners.

The two organizations, affiliated with the Calvary Lutheran Church, were placing scarves, winter hats and gloves on local statues, specifically the presidents that reside on most downtown corners. Passersby who were facing a cold winter without proper attire were urged to take any items they needed.

Swiftly, however, the Calvary do-gooders were informed by City Attorney Joel Landeen that the city prohibits decorating the statues. The city's policy, adopted in 2013, was designed to prevent the statues from becoming mini-billboards for political messages or other forms of advertising.

Tom Martin, leader of the Calvary youth group, and Calvary Pastor David Piper were contrite, saying they didn't know about the policy. They removed items that had not yet been taken by people in need.

On Monday, Allender said he had never heard of the policy. He said he deliberated it over the weekend and decided to rescind the policy, but only slightly.

Advertising and political messages still are not allowed, but Allender said Monday that winter accessories such as scarves, hats and gloves will be allowed on the presidents from Nov. 15 through March 15.

The city faced a dilemma in setting the policy, he said. By banning all adornment of the statues, advertising and political messages were not allowed, but at the same time, the policy eliminated helping those who need warm clothes.

"Government doesn't deal very (well) with dilemmas," he said. "We take the easy way out."

Allender added: "Let's take a moment today to recognize that Rapid City is more than a city and more than a tourist destination. We are also a community, and communities have a personality. Communities work together. Communities take care of their own."

After his speech, Allender said he faced no political pressure to make the change. He said he had received "one nasty email" about it, but he made the decision on his own. "I just couldn't let that rest," he said.

Piper, the pastor at Calvary Lutheran Church, said the change in policy is "kind of a neat thing."

He said the church's knitters are at work making more of the items, and he said people can expect to see scarves, hats and gloves back on the statues "in about a week or so."

The reversal came at a press conference Monday in which Allender signed executive proclamations declaring this as National Hunger and Homeless Awareness Week, and that November is also National Runaway Prevention Month in Rapid City.

One proclamation states that the city will do its best to help people find homes and food when needed, and that residents should help support people in poverty, and avoid stereotypes surrounding homelessness. The runaway proclamation states that families and communities must be empowered to prevent situations that lead young people to feel desperate enough to run away from home.

Gas prices fall below $4 per gallon

Gas prices fall below $4 per gallon

Mayor Steve Allender speaks at the HOPE Center Monday morning at a homelessness awareness event. Allender announced Monday he was allowing the placement of certain winter accessories on the presidential statues on downtown street corners.