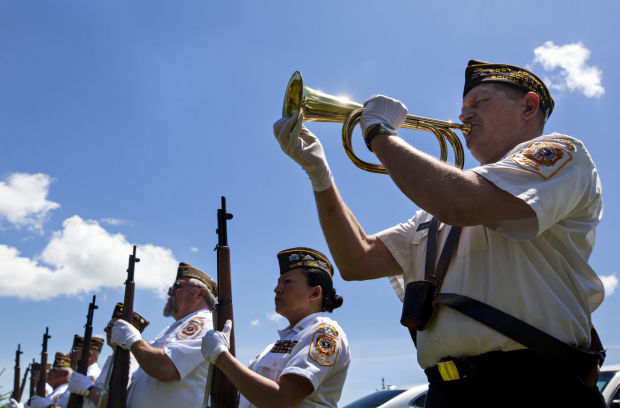 David Van Cleave of Rapid City Post 1273 plays Taps after a salute to the veterans who gave their lives on Monday at Black Hills National Cemetery. 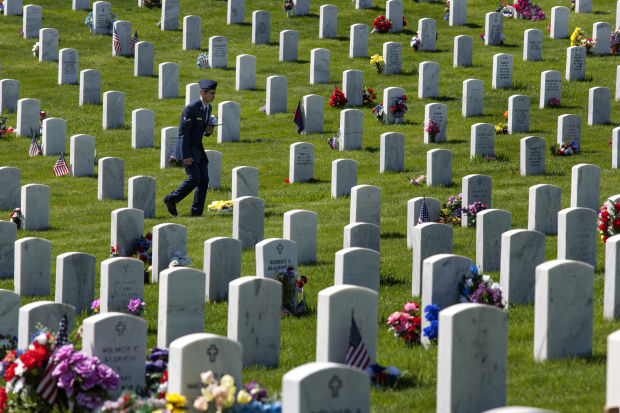 Airman First Class Sammy Mendon walks across a field of headstones to assist a family in finding their loved one's grave on Monday at Black Hills National Cemetery. 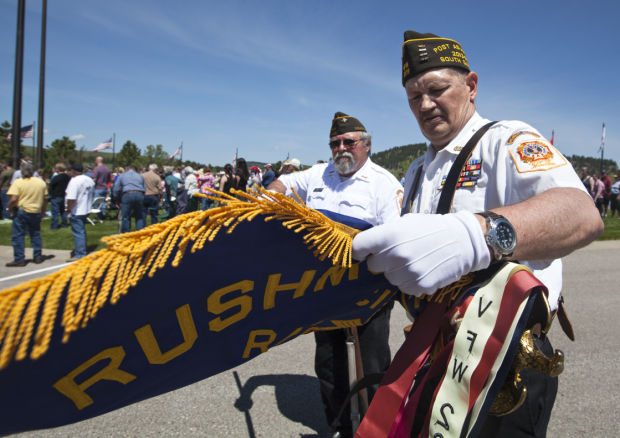 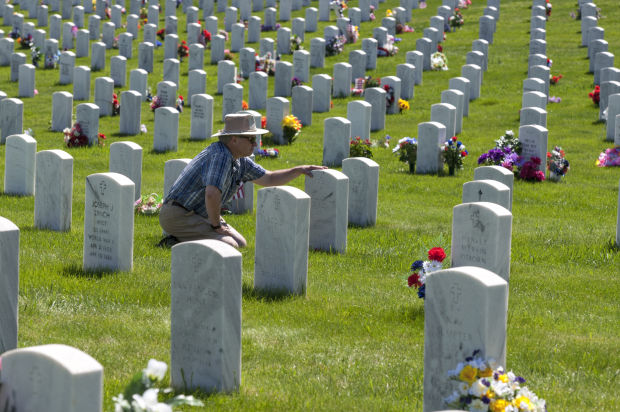 On sacred ground, a group of honor guards stood apart and watched the hundreds who came out to the Black Hills National Cemetery to pay their respects to fallen soldiers.

Normally they were called out for only a few dozen at funerals, but on a clear, 80 degree Monday morning, the Veterans of Foreign Wars Post 1273 honor guard performed the same solemn ceremony they do countless times not far from thousands of headstones.

As speakers talked of shared sacrifices and honoring the nation's fallen dead, the men and lone woman of the post reflected on the sacred rites they regularly perform: the 21-gun salute, playing taps and folding the flag.

"The fallen soldier deserves a last salute," said Marv Czerwonka, a Vietnam veteran and the group's de facto leader. "A lot of families don't realize that."

Often he is the one to present the folded flag to a grieving widow. He said members of the post will often go to two or three funerals in a single day within 60 miles of Rapid City.

“Rain or shine, we’ve done it. We’ve done it in cemeteries I didn’t even know they had,” he said.

With the Afghanistan conflict scheduled to wind down at the end of this year, it's mostly older veterans they are honoring these days.

Sometimes he recognizes the person he is helping in a way to bury. The work can be emotionally difficult and Czerwonka said he makes it a general practice to keep his distance from the families.

"I don't feel like I should get too close to them,"  he said quietly. "It's easier to me if I don't talk to them."

Even though she may look solemn in the honor guard, Lisa Jendry admitted its power still gets her worked up, especially when she is watching families at funerals.

"I always get emotional during taps," she said. "I catch someone's eye and you think about the memories they share. They lost someone they loved. It's their final farewell."

Jendry said being in the honor guard gives her a chance to pay back others when she is physically no longer able to be in the military. She left the Army in 2006 following a traumatic brain injury she suffered in a car accident after an eight-year career, including an Iraq deployment.

She said she plans to be part of the honor guard until she cannot walk anymore.

Jendry joined veterans of the Lakota tribe there hours later who held their own ceremony to honor their fallen warriors, complete with a drum circle and feathered eagle staffs. It also had a small honor guard, also presented the American flag and fired a gun salute.

“The Army and Marines have a value system and we do, too,” said Richard Charging Eagle, its master of ceremony. "That was our responsibility as men."

“People ask, why do you want to do this when this government mistreated you? We were here first and we’ll do anything to protect this country,” he said.

“It’s kinda hard to describe, because this is something we do all the time,” said Kella With Horn, a veteran from the 1980s honored with a red U.S. Army shawl. “Every pow wow we go to, we honor our veterans.”

“Sure, we are sharing a little bit of who we are, but we are doing what we were taught,” she said.

Memorial Day services honor those who gave their lives

Check out these photos from the Memorial Day services that took place on Monday at the Black Hills National Cemetery.

David Van Cleave of Rapid City Post 1273 plays Taps after a salute to the veterans who gave their lives on Monday at Black Hills National Cemetery.

Airman First Class Sammy Mendon walks across a field of headstones to assist a family in finding their loved one's grave on Monday at Black Hills National Cemetery.