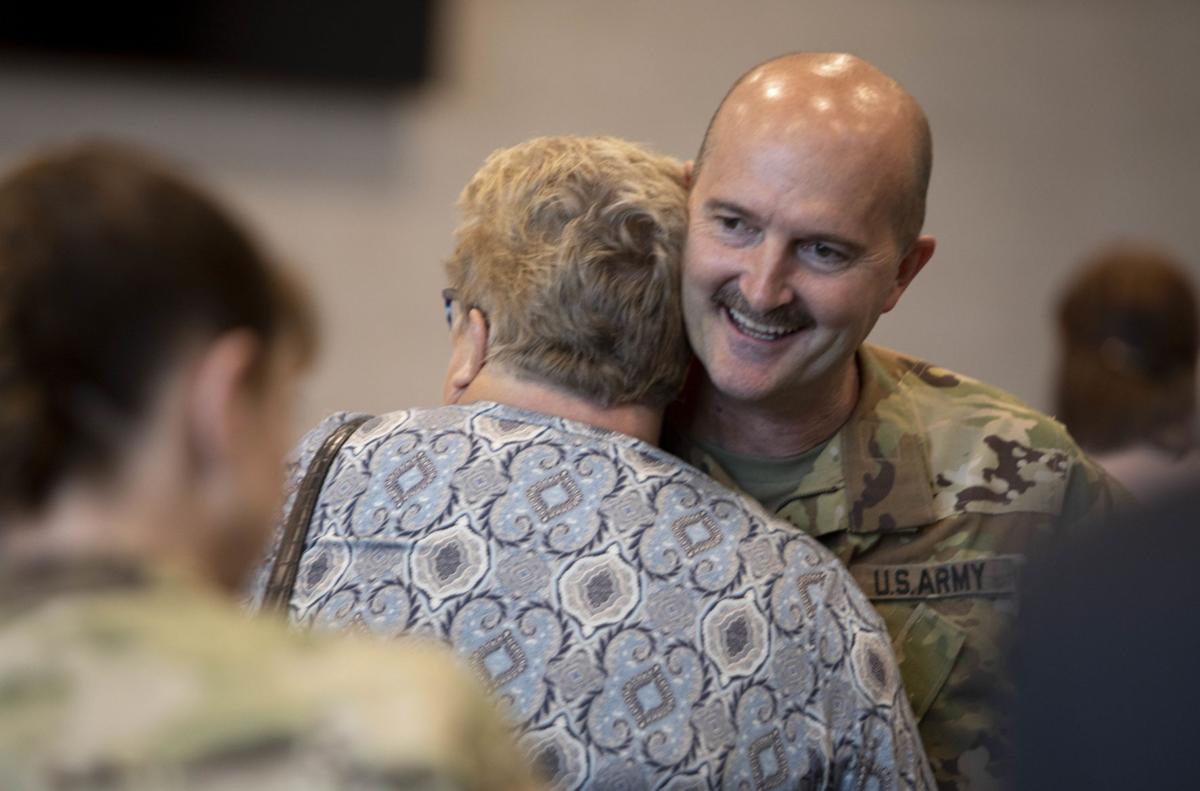 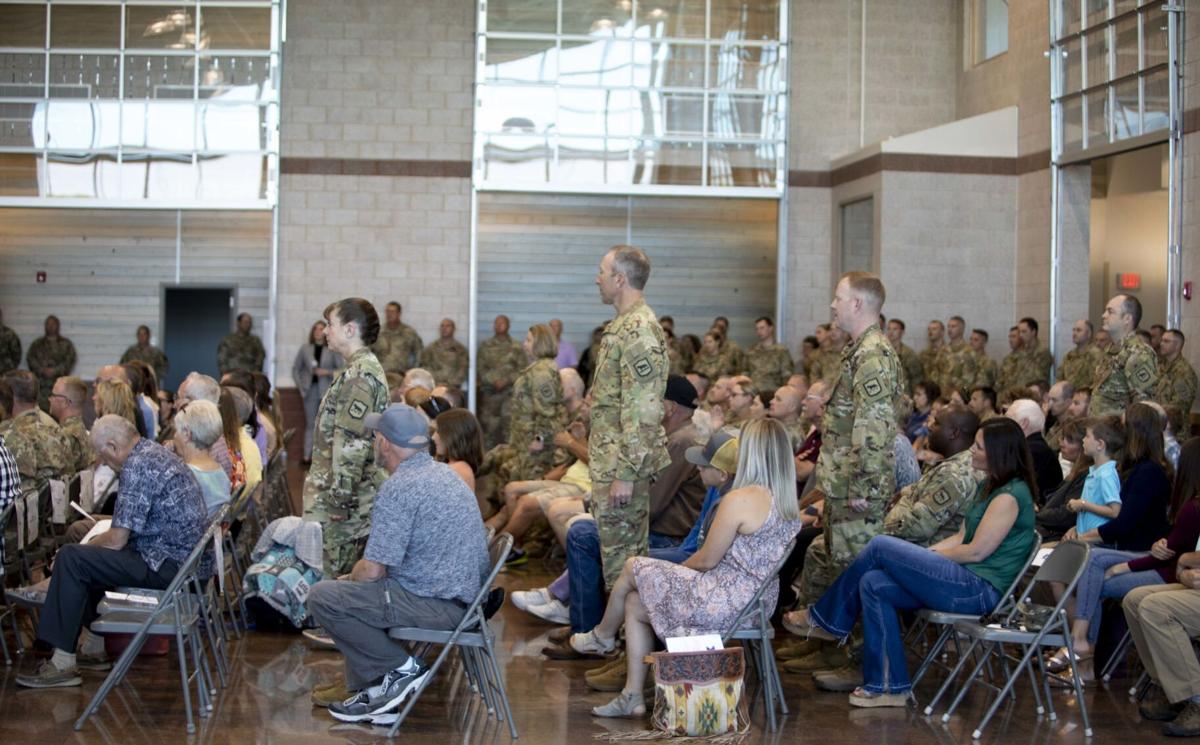 Soldiers who are deploying for Djibouti, Africa, stand for the reading of the order during the ceremony. 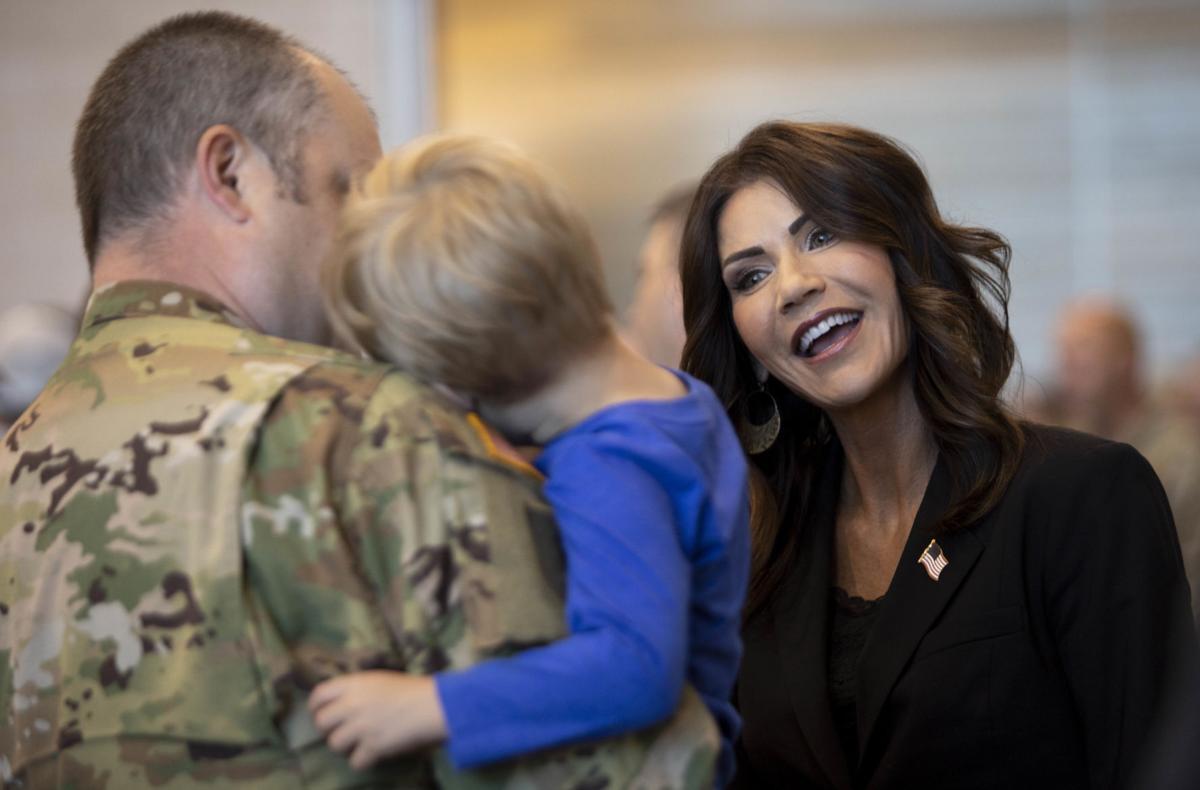 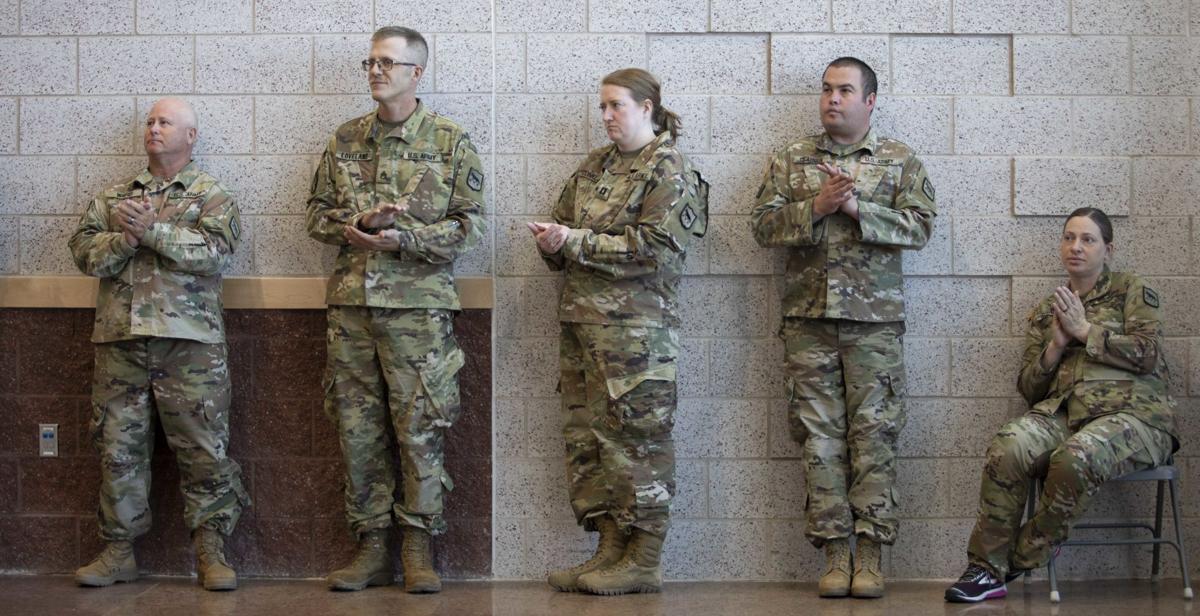 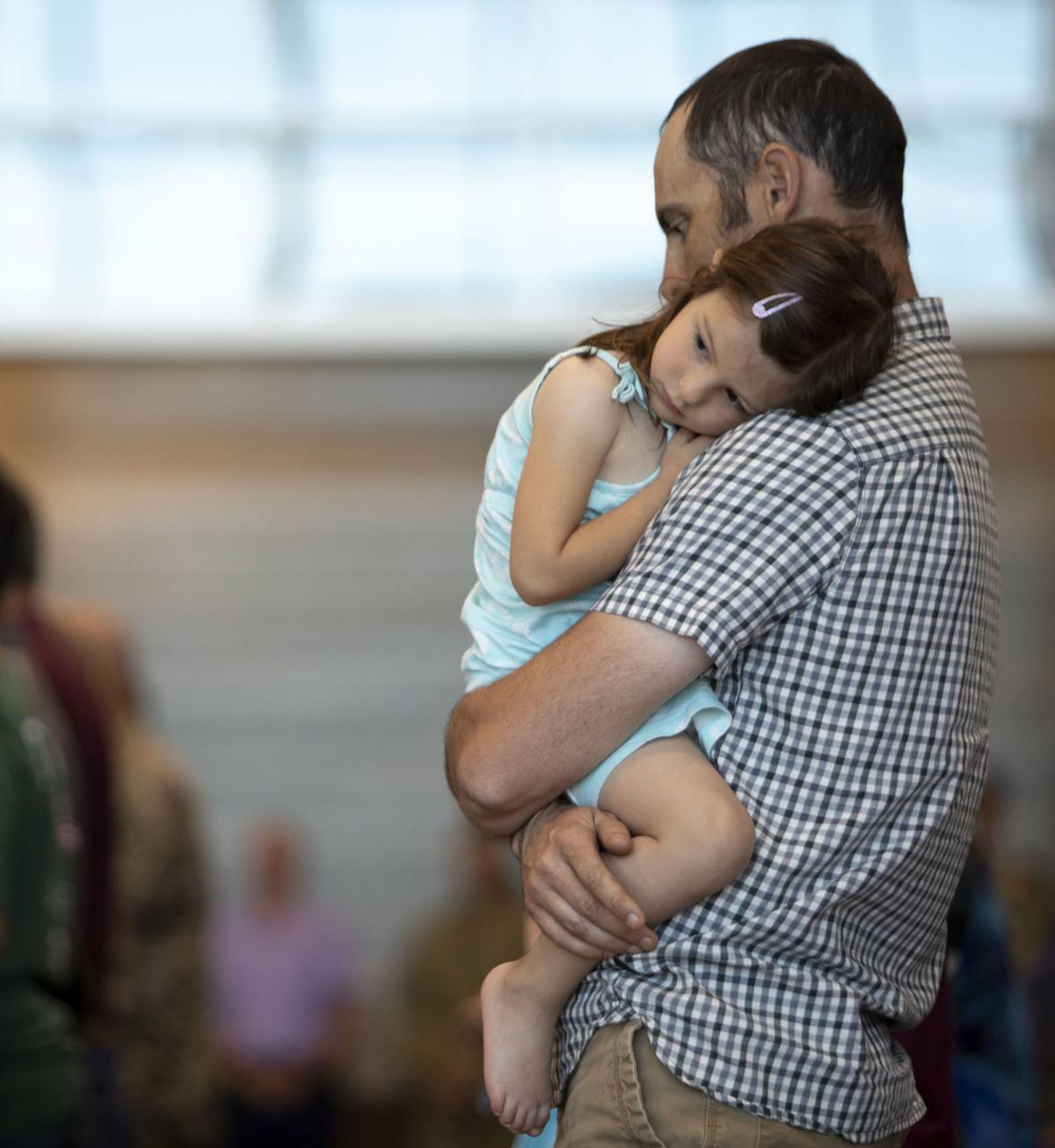 Jack Baker holds daughter Scout Baker during the South Dakota Army National Guard Deployment Ceremony on Friday in Rapid City. Baker's brother-in-law was one of the soldiers being deployed Friday. "We're just proud of Will and hopefully he'll have a safe return home in a few months," Baker said. 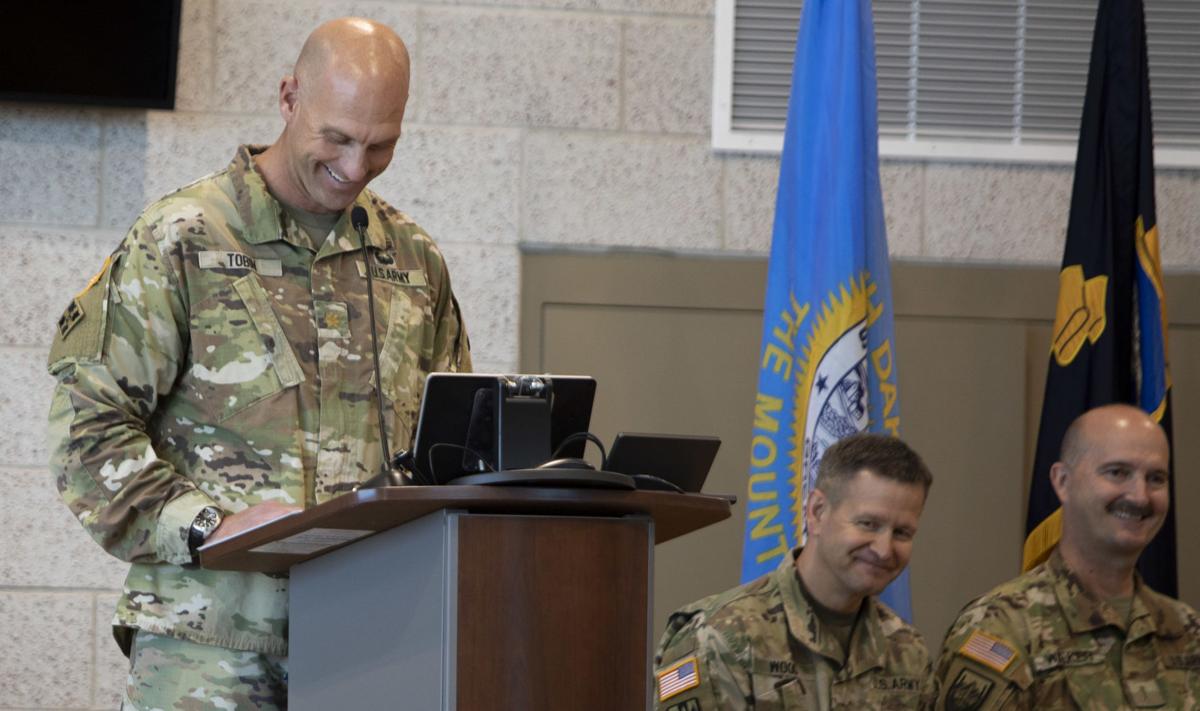 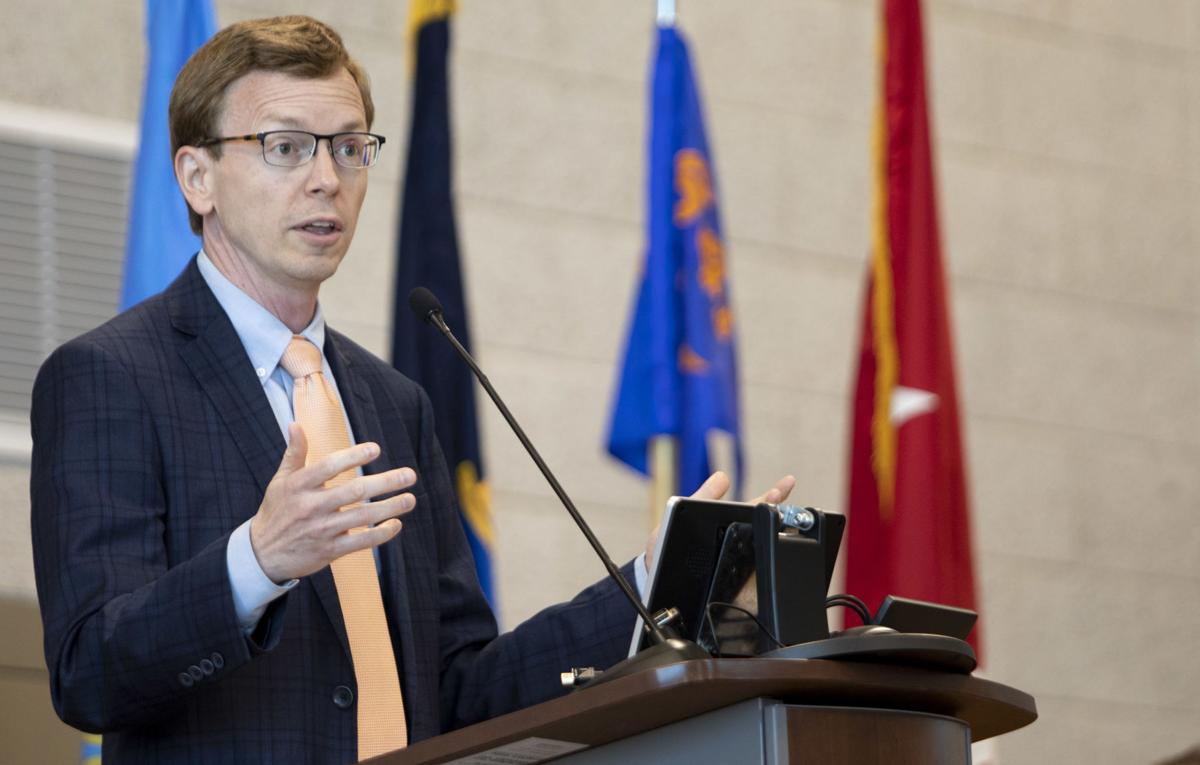 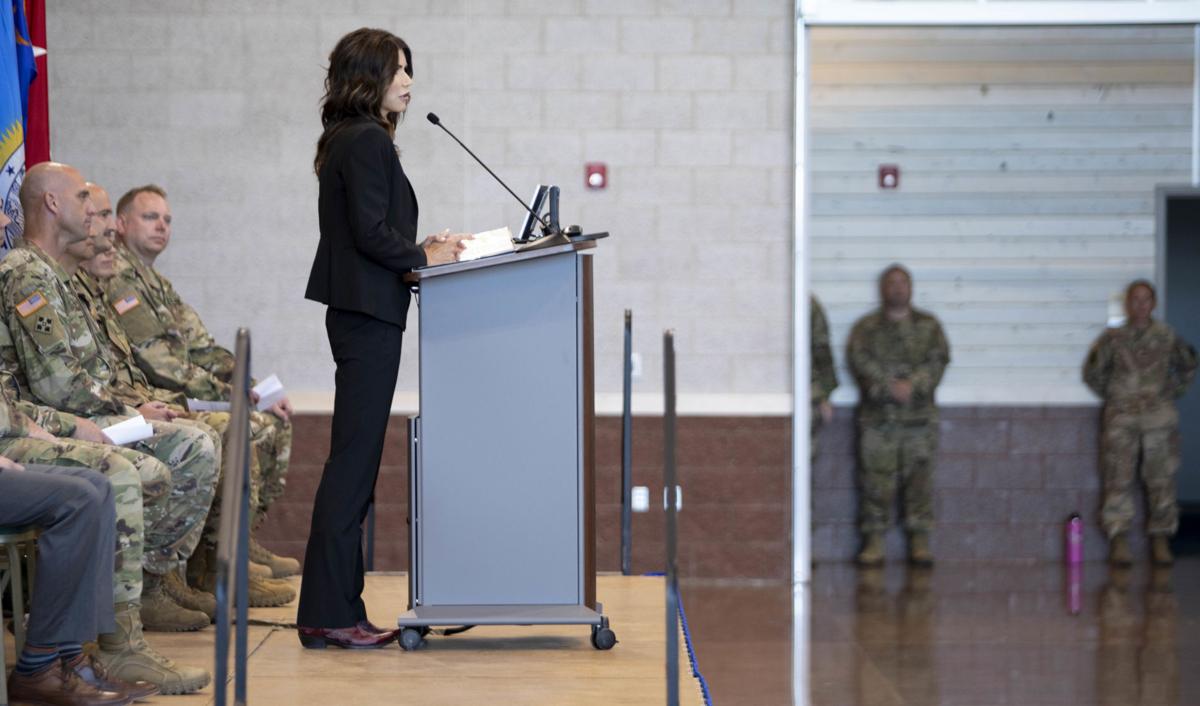 Seven members of the South Dakota National Guard received a grand send-off Friday morning in Rapid City prior to their nine-month deployment to Djibouti on the Horn of Africa.

More than 100 well-wishers gathered at the new Army Aviation Readiness Center at Rapid City Regional Airport for the deployment ceremony, including Gov. Kristi Noem, Rep. Dusty Johnson and Maj. Gen. Jeff Marlette, who is the adjutant general of the South Dakota National Guard.

The soldiers are part of the Army National Guard's Detachment 5, Company C, 2/641st Aviation Regiment based in Rapid City. The unit deployed as part of Operation Enduring Freedom and will support the Combined Task Force-Horn of Africa to provide aviation support in the region.

The seven soldiers are pilots and operation specialists that operate the C-12 Huron, a military grade Beechcraft King Air that transports personnel. Prior to their deployment to Djibouti, the unit will receive theater-specific training at Fort Bliss, Texas.

"Thank you for the fact that when South Dakota National Guard men and women step up and serve, that you do it with excellence. That you do it in a way that is inspirational," Noem said. "You are going to the Horn of Africa not just as warriors, but as ambassadors for the United States of America."

Johnson said the support mission is important for America's standing in the world and the security of the nation.

"The American people will sleep better at night, as we have for a long time, knowing the men and women in uniform are willing to answer these calls," he said.

Marlette pledged support for the soldiers' families while they are deployed.

"Don't forget that we are here for you. You don't have to walk this walk alone while your soldiers are gone," he said.

This will be the first unit deployment to the Horn of Africa. The 2/641st had three previous unit deployments to Afghanistan, which included passenger and cargo transport missions in 2008, as well as intelligence, surveillance and reconnaissance missions in 2011 and 2015.

Following the deployment ceremony, a ribbon-cutting ceremony was held at the new Army Aviation Readiness Center at the airport. The 58,751-square-foot facility is a $20 million project, with $15 million coming from federal appropriations and a $5 million match from the state.

The center will be the home of four aviation units within the South Dakota National Guard, comprised of 154 soldiers. The authorization to build the facility came in 2019.

It includes space for training, administrative and logistical requirements, and an assembly hall. The facility is designed for a minimum life of 50 years.

"We take very seriously having facilities that will equip and train our soldiers to go out and do what they need to do," Marlette said.

Tim Sughrue enlisted with the U.S. Army during the Vietnam War era to make a difference for wounded soldiers.

U.S. Sens. Mike Rounds and John Thune announced Wednesday that Ellsworth Air Force Base will officially be the Air Force’s first base to recei…

Paul Priest, at the young age of 95, has no plans to slow down. He still makes presentations across the Rapid City area on his experience with…

Col. Joseph Sheffield has been named the new commander of the 28th Bomb Wing at Ellsworth Air Force Base near Rapid City.

STORIES OF HONOR: Smith flew attack missions in Vietnam, moves on to be chief 747 pilot

Darrel Smith doesn't consider himself to be a hero. Instead, he calls his life of being a farm boy, star athlete, a 2nd Lieutenant attack pilo…

EDITOR'S NOTE: This story was originally published in the Journal on Dec. 10, 2019. It has been updated with new information.

Soldiers who are deploying for Djibouti, Africa, stand for the reading of the order during the ceremony.

Jack Baker holds daughter Scout Baker during the South Dakota Army National Guard Deployment Ceremony on Friday in Rapid City. Baker's brother-in-law was one of the soldiers being deployed Friday. "We're just proud of Will and hopefully he'll have a safe return home in a few months," Baker said.