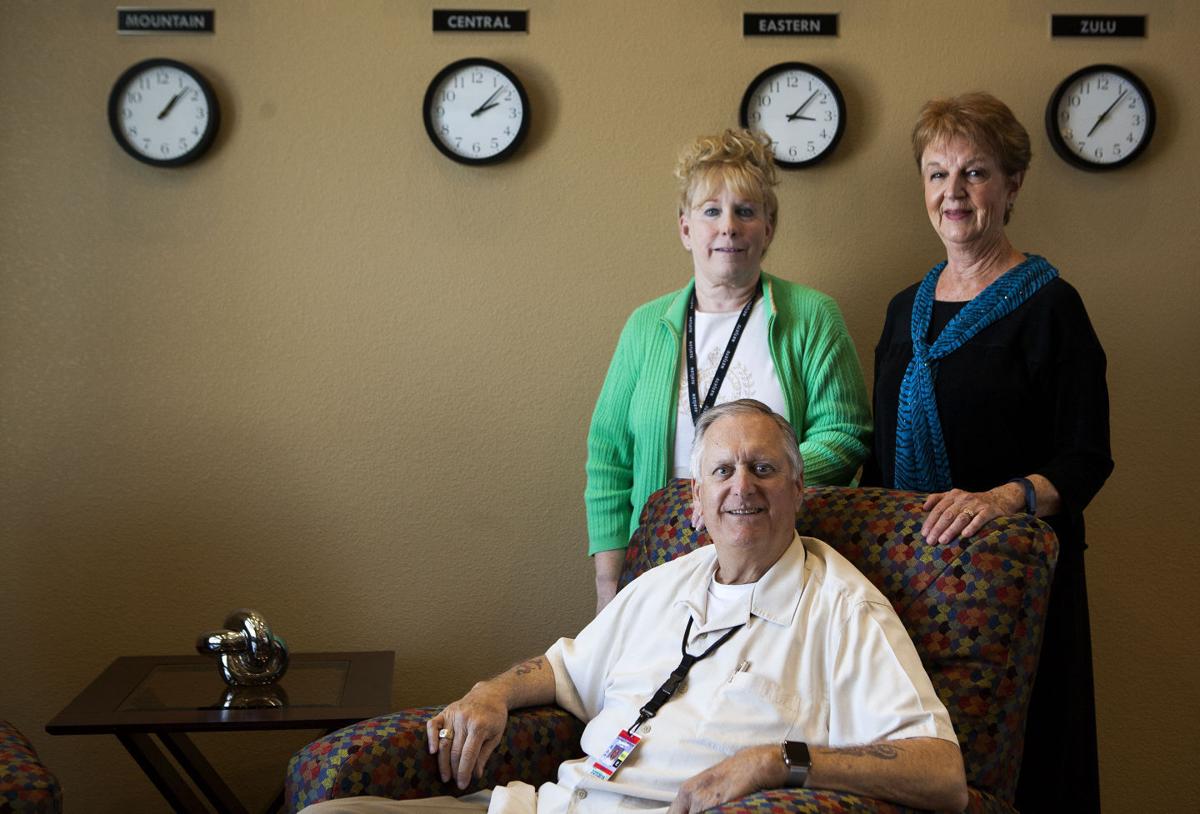 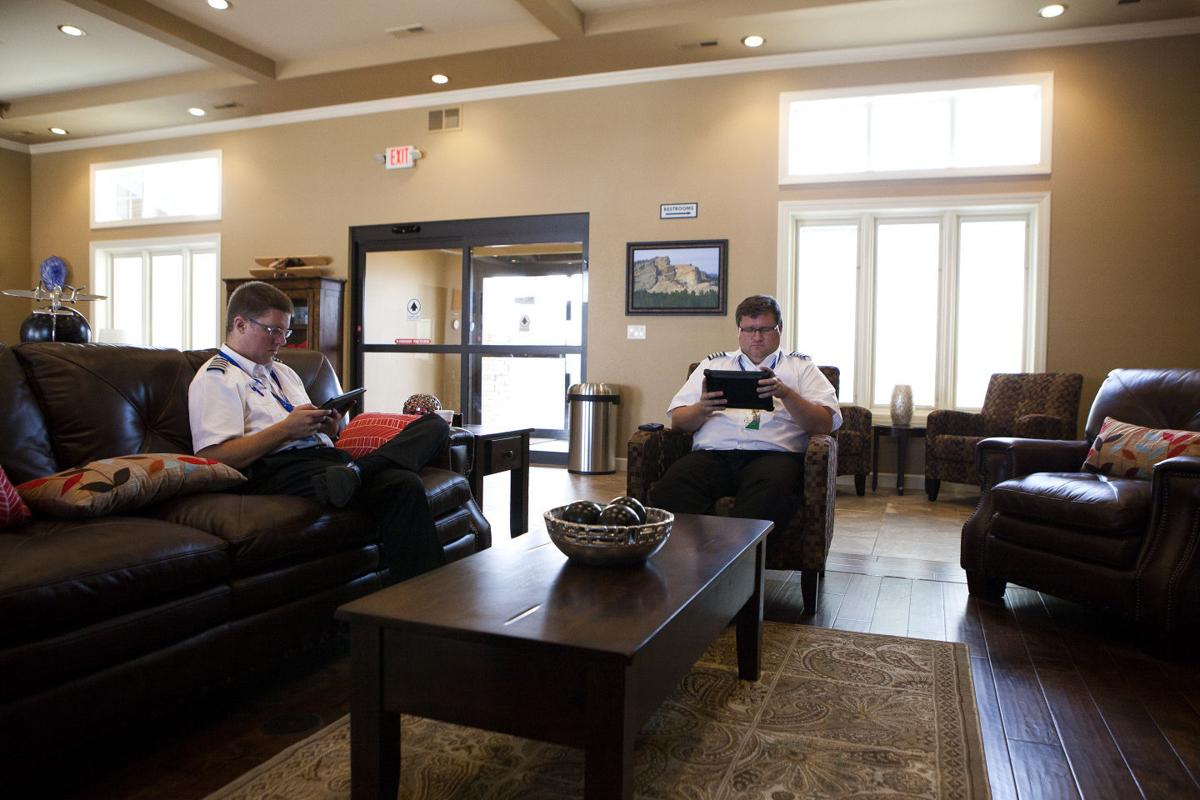 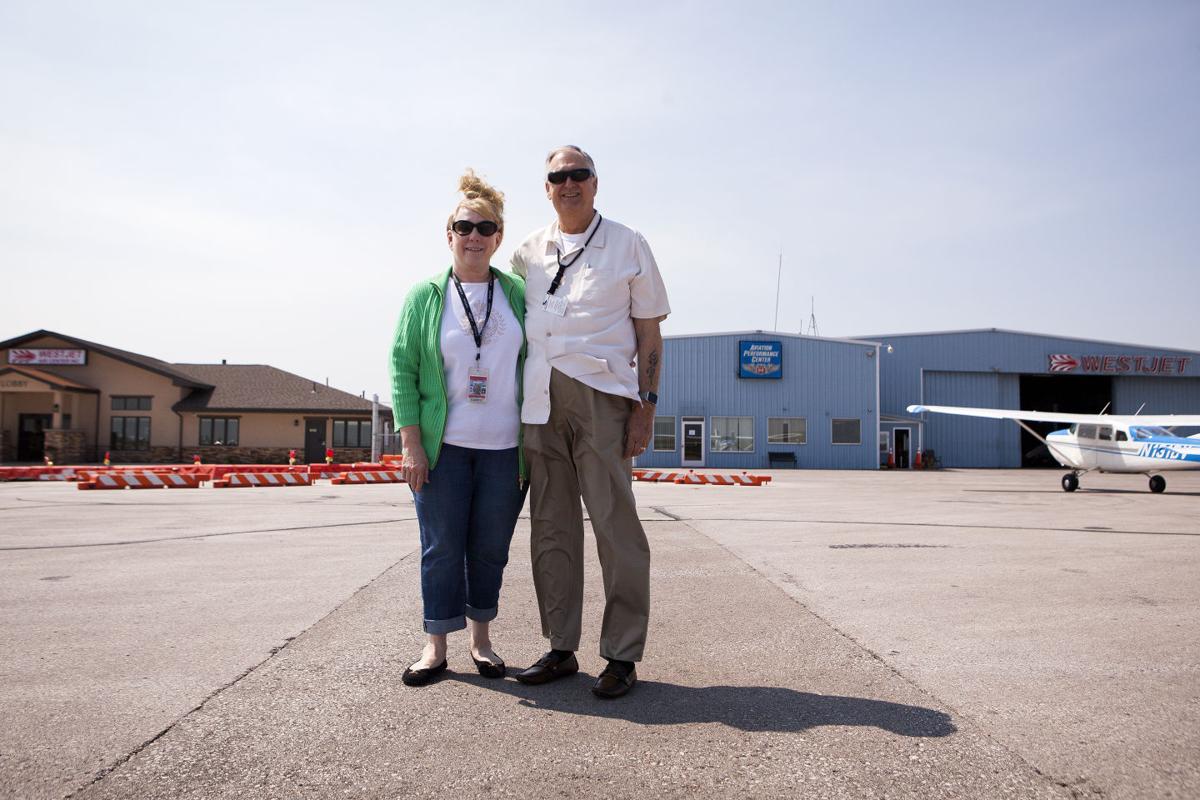 Linda and Don Rydstrom stand Tuesday in front of the old Westjet Air Center, at right, and their new facility. The Rydstrom family has owned and operated WestJet for 40 years. 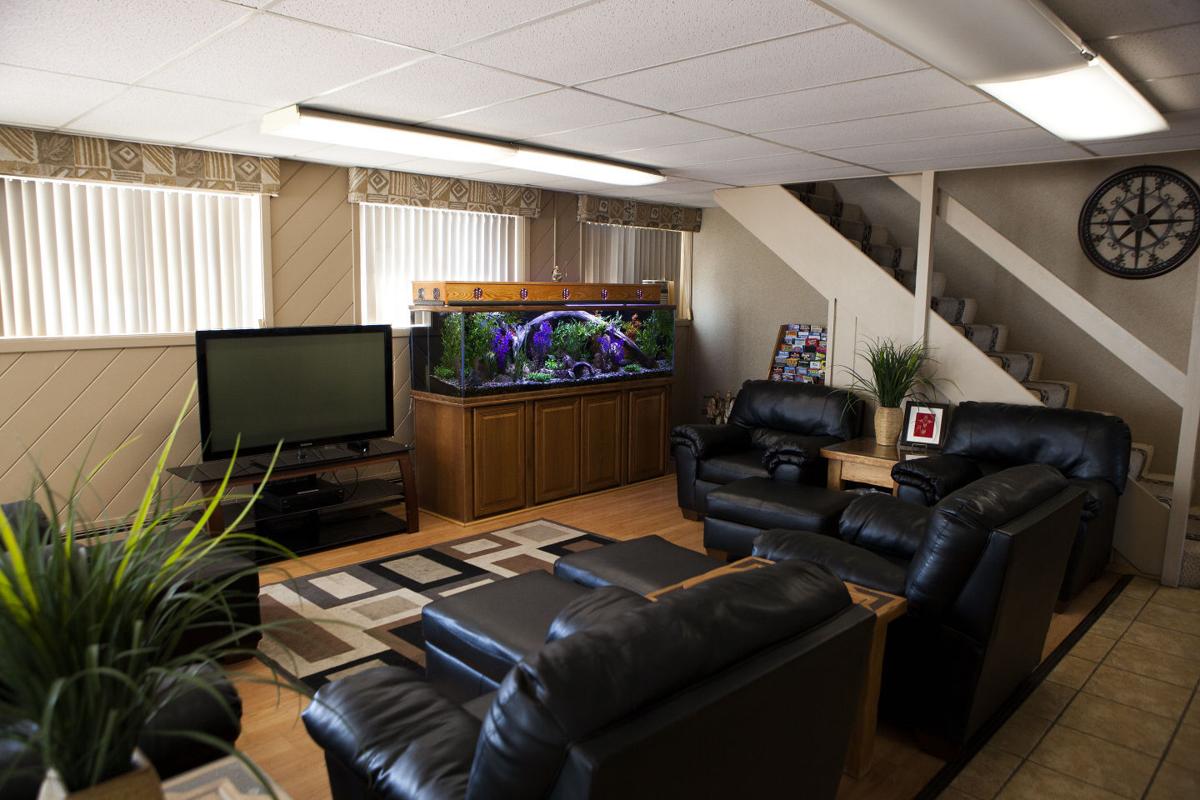 The main lounge area of the old Westjet Air Center. The Rydstrom family, which has owned the facility for more than 40 years, constructed a new terminal building adjacent to the historic terminal. 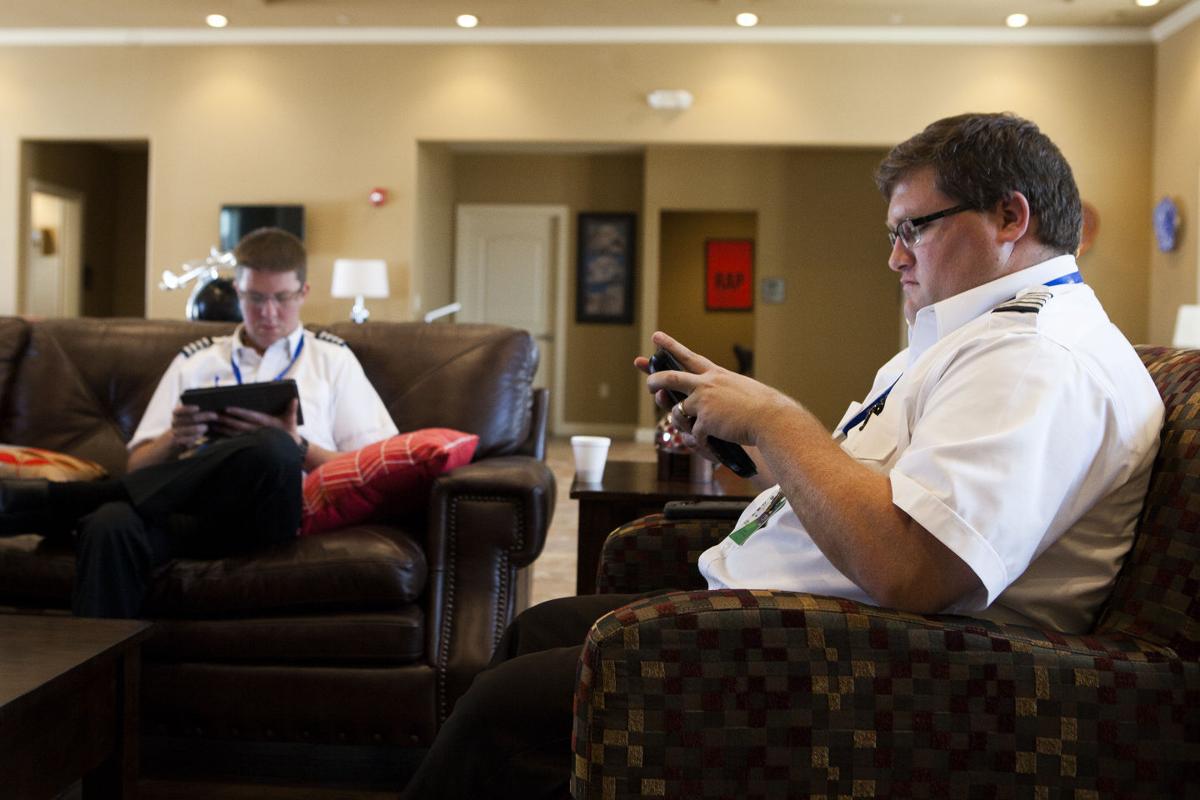 Pilots James Boyle and Dan Campbell relax and read on their iPads Tuesday before a flight to Wisconsin in the main area of the new Westjet Air Center.

Walking into Westjet Air Center’s new executive terminal at the Rapid City Regional Airport is like strolling into the lobby of a comfortable hotel.

A visitor’s eye is immediately drawn to an arrangement of soft easy-chairs under a chandelier. The chairs are centered around a fireplace, topped above the mantle by a large flat-screen television.

The only thing that conflicts with the ambiance of a quiet place of lodging is the whoosh of passenger aircraft taxiing to and from the nearby regional airport main terminal, and the noise of other small aircraft engines idling on a nearby tarmac.

That’s precisely the feeling of hospitality Don and Linda Rydstrom wanted to present to visiting private and charter pilots and passengers when they invested more than $1 million, not just in the new terminal, but in the future of their long-time family business as a whole.

“We were not really going for a high-end hotel, we just wanted it to be more welcoming,” said Linda Rydstrom, co-owner of Westjet, which provides refueling, hangar and maintenance and repair services for private and commercial aircraft as the airport’s fixed-base operator, or FBO.

Don Rydstrom took over Snedigar Flying Service in 1975 and changed the name to Westjet two years later, operating out of a more industrial, tin-clad structure just a few feet to the north of the new terminal.

Built on the site of the airport’s old fire station and airline terminal, both torn down last fall, Westjet’s new executive terminal is a significant departure from other airport facilities, because of the amenities offered to flight crews and passengers.

“It’s really quite unique in the industry that we’re in,” Don Rydstrom said. “This is not necessarily your run-of-the-mill FBO building.”

Along with the visual appeal and living room-like comfort for passengers, the new terminal features a flight-planning center and a pilot’s lounge, with separate quiet rooms for sleeping.

Before, if someone really wanted to sleep in the old building there was a couch in a room shared with vending machines, Linda said. The quiet rooms are furnished with recliners and offer far more privacy.

Opposite of the pilot’s lounge and crew area is a fully equipped snack bar, and also a children's room with toys where youngsters can play.

Ground was broken for the new building in January. Wet weather delayed completion until late July, but the Rydstroms were able to open in time for a crush of private and charter aircraft traffic for the 75th Sturgis motorcycle rally.

Aircraft from as far away as Switzerland and New Zealand used Westjet’s terminal and refueling facilities during the rally. Passengers and flight crews packed the new building, Linda said.

Both Don and Linda retired from commercial flying about eight years ago. Linda used to fly with Miranda’s baby carrier strapped into the co-pilot’s seat.

Miranda started as a receptionist at age 16, graduated to refueling aircraft during summer breaks. She now works as a commercial pilot and certified flight instructor in Phoenix, Ariz.

“My fiancé and I want to start a flight school (in Rapid City),” Miranda said. “We both learned to fly in Phoenix and there’s a huge community at all the different airports here and Rapid just seems to lack that.

“We want to see if we can get some of that camaraderie there, especially with people our age, she said. “They can learn to fly for fun and not necessarily go into the business.”

Linda started as a receptionist at Snedigar's and became a commercial pilot. She and Don were married in 2004.

“You just don’t see those family operations. A lot of big corporations have started taking them over, and we’ve certainly been approached by the big corporations,” Linda said. “We’ve been here a long time and we’re really expanding for the future."

The future became even more secure this week when the regional airport board approved an extension of Westjet’s FBO lease from 25 to 35 years under new state regulations allowing for leases of up to 50 years.

Flying really does run in the Rydstrom family and Miranda will keep the tradition going when she and her fiancé open a flight school in the old Westjet building, which will also house space for aircraft maintenance.

“Once you start in aviation, you can’t really get out,” Miranda said.

The city has a $20 million surplus and the discussion does not involve street repair? Where do the council members drive?

Linda and Don Rydstrom stand Tuesday in front of the old Westjet Air Center, at right, and their new facility. The Rydstrom family has owned and operated WestJet for 40 years.

The main lounge area of the old Westjet Air Center. The Rydstrom family, which has owned the facility for more than 40 years, constructed a new terminal building adjacent to the historic terminal.

Pilots James Boyle and Dan Campbell relax and read on their iPads Tuesday before a flight to Wisconsin in the main area of the new Westjet Air Center.