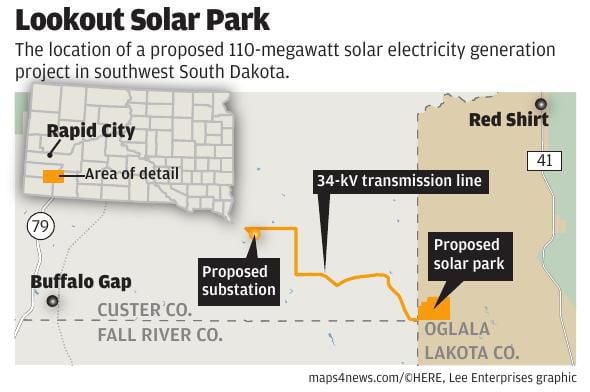 German energy developers and their Native American business partners have inched closer to the construction of a historic $100 million solar electricity generation project on a tribal reservation in southwest South Dakota.

The Germans’ company, Lookout Solar Park I LLC, and the staff of the South Dakota Public Utilities Commission filed a settlement document Monday that could soon lead to the commission’s approval of a project permit. The commission has had the permit application under review since last year.

The three elected members of the commission reviewed the settlement stipulation during a regularly scheduled meeting Tuesday in Pierre and postponed action on it, partly because they had so little time to review it. The commission could vote on the permit application as soon as next month.

“It’s kind of fun to be historical in South Dakota in a positive way,” Fiegen said.

The 110-megawatt project is the first solar generation proposal in South Dakota big enough to need a permit from the state’s Public Utilities Commission — in other words, if built, the solar park would be the biggest in the state. The threshold for a permit is 100 megawatts of maximum output.

Several more steps are required before the project can be constructed, including the issuance of the PUC permit. The project also needs a buyer for the electricity — there isn’t one yet, the developers said Tuesday — plus a connection with the Western Area Power Administration’s transmission system, which has been requested and is under review.

The solar park would be within the Pine Ridge Reservation on the western edge of Oglala Lakota County, about 20 miles east of Buffalo Gap. Eleven miles of proposed underground transmission line would carry electricity from the park to a proposed substation in Custer County.

At the solar park, approximately 500,000 solar panels would be arranged in arrays across an area of 250 acres. Lookout Solar Park I LLC, which can be traced to a company called Wircon GmbH in Germany, will lease the land from the Rapp family, for whom the U.S. Bureau of Indian Affairs holds the land in trust.

Lynn Rapp, a member of the Oglala Sioux Tribe, spoke for the family at Tuesday’s meeting. She said the lease agreement is the first of its kind for the Bureau of Indian Affairs.

If the City of Chadron wishes to proceed with a community solar project, it must find a new location for investigation.