It is feasible and might someday be necessary to capitalize on a pair of old Missouri River water rights by building a pipeline to Rapid City, a university researcher told a local government board last week.

But he said a pipeline could cost up to $1.87 billion, making it a long-term idea that could require funding from Congress.

Kurt Katzenstein, an associate professor of geology and geological engineering at the South Dakota School of Mines & Technology in Rapid City, presented his findings to the West Dakota Water Development District during a meeting Tuesday of the district’s board of directors in a Mines classroom.

Katzenstein said projections indicate that the Rapid City area could have enough water from local sources to sustainably meet demand for the next 100 years if average precipitation levels prevail. Under prolonged drought conditions, he said, it’s already possible that local demand could exceed the amount of water needed to sustainably support human usage while reserving enough water for fish and wildlife.

The accuracy of the projections is dependent on population trends and the economic factors that influence them, Katzenstein said. But he emphasized that whether the area grows slowly or rapidly, the day will come when local water supplies are insufficient.

“Our ability to weather drought periods is going to be greatly reduced in the future,” he said. “At some point, difficult decisions are going to have to be made on many fronts.”

One of those decisions could be whether to build a pipeline from the Missouri River and how to fund it. Many other communities in South Dakota are already served by pipelines from the river, which has a prodigious amount of water stored behind six large dams along its length, including four along the portion of the river that flows through South Dakota.

The West Dakota Water Development District and Rapid City each have future-use permits for Missouri River water, which they have paid nominal amounts to maintain since the 1970s. West Dakota’s permit is for 10,000 acre-feet annually, which is about 3 billion gallons per year. Rapid City’s permit is for 66,000 acre-feet, which is about 21 billion gallons.

Total water use last year in Rapid City was 3.25 billion gallons, according to city officials, and the five-year average from 2013 to 2017 was 3.66 billion gallons per year. The city currently gets its water from Rapid Creek, which has storage at Deerfield and Pactola reservoirs in the Black Hills, and from wells.

Missouri River water rights are prioritized by state regulators on a first-come, first-served basis — the oldest rights have the highest priority. A chart in Katzenstein’s presentation showed West Dakota with the fifth oldest future-use permit for the Missouri River and Rapid City with the seventh oldest.

A pipeline from the Oahe Reservoir on the Missouri River to Rapid City would be 171 miles in length and would require five or six pump stations along its length, Katzenstein said. Oahe is about 1,560 feet lower in elevation than Rapid City.

During a board discussion after the presentation, West Dakota board member Nathan Gjovik said many water pipeline projects take decades from conception to completion. He also speculated that if federal laws or policies change, today’s future-use permits could someday be invalidated.

“If you don’t act on something, you may not even have access to it going forward, even if we’ve been paying for this permit,” Gjovik said. “So it seems like if we were interested in doing something, it would behoove us to do something in regard to pushing it forward, to show that we are planning on using that resource.”

The West Dakota board commissioned Katzenstein and a team of other Mines faculty members and students in July 2018 to conduct the study for $37,341. Tuesday evening’s verbal presentation will be followed by a final written report that Katzenstein said he will submit to the board in the coming weeks.

The West Dakota Water Development District encompasses the area west of the Cheyenne River within Pennington County. Property owners in the district pay a tax of 2.4 cents for every $1,000 of their property’s assessed value, which generates $200,000 in annual revenue for the district. The district is operated by a nine-member board of publicly elected directors and a part-time administrator, with a stated mission of “partnering with state and local entities to protect water resources.” 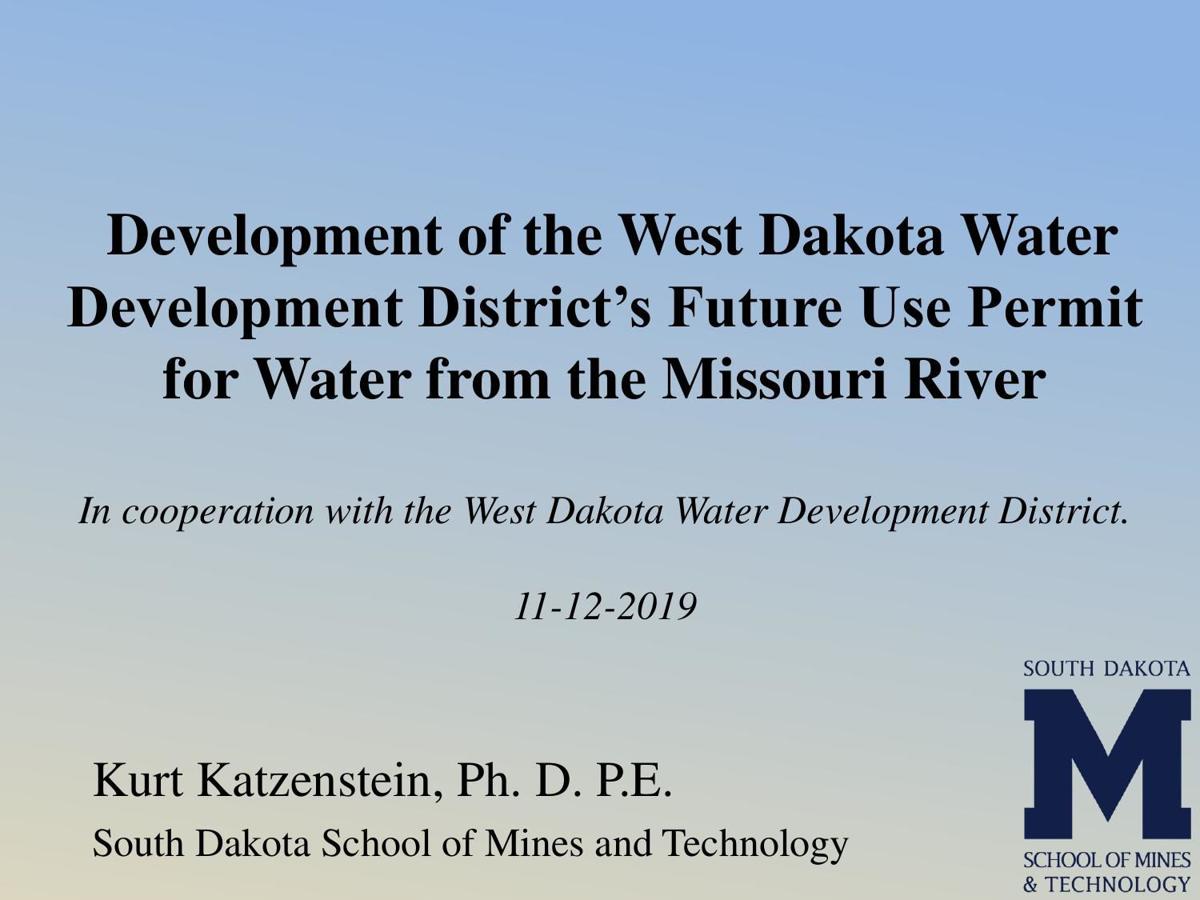 A dredging project at Canyon Lake has been postponed again, this time to the fall.

After an attempted dredging of Rapid City’s Canyon Lake was thwarted several years ago, another attempt will be made this spring.

Board votes to restore stream-gauge funding

Funding for two Black Hills stream gauges could soon be restored by a local water development board, following a political shakeup that was ca…

A member of a local public board who is angry about coverage by the Rapid City Journal proposed allocating $100,000 of taxpayer funds Tuesday …

Four candidates who ran as a team to change the balance of power on a local water district board won their races Tuesday night.

Election challengers seek to re-focus West Dakota board on water

Three of the local board members who controversially voted to authorize $7,500 in taxpayer funds to fight against septic regulations are being…

Prodded by Ferebee, board commits up to $7,500 in public funds against septic laws

A publicly elected board with a stated mission of protecting water resources is facing a backlash after committing up to $7,500 in public fund…

The Lower Brule Sioux Reservation gets a little smaller every year.