A Montana university professor is set to conduct the most comprehensive study yet of the Hideaway Hills mine collapse in order to determine if other homes are at risk.

“This is the first qualified study to map the extent of the mine and any other community voids since the Paha Sapa Grotto cavers went down to map its then accessible portions,” said Patrick Ealy, director of research for the law firm that ordered the study.

A collapse on April 27, 2020, on East Daisy Drive in Black Hawk, revealed that at least part of the Hideaway Hills neighborhood had been built over a shallow gypsum mine. More than 40 people from 15 homes were forced to evacuate and those who remain are afraid their homes have lost all value and are at risk of collapsing. 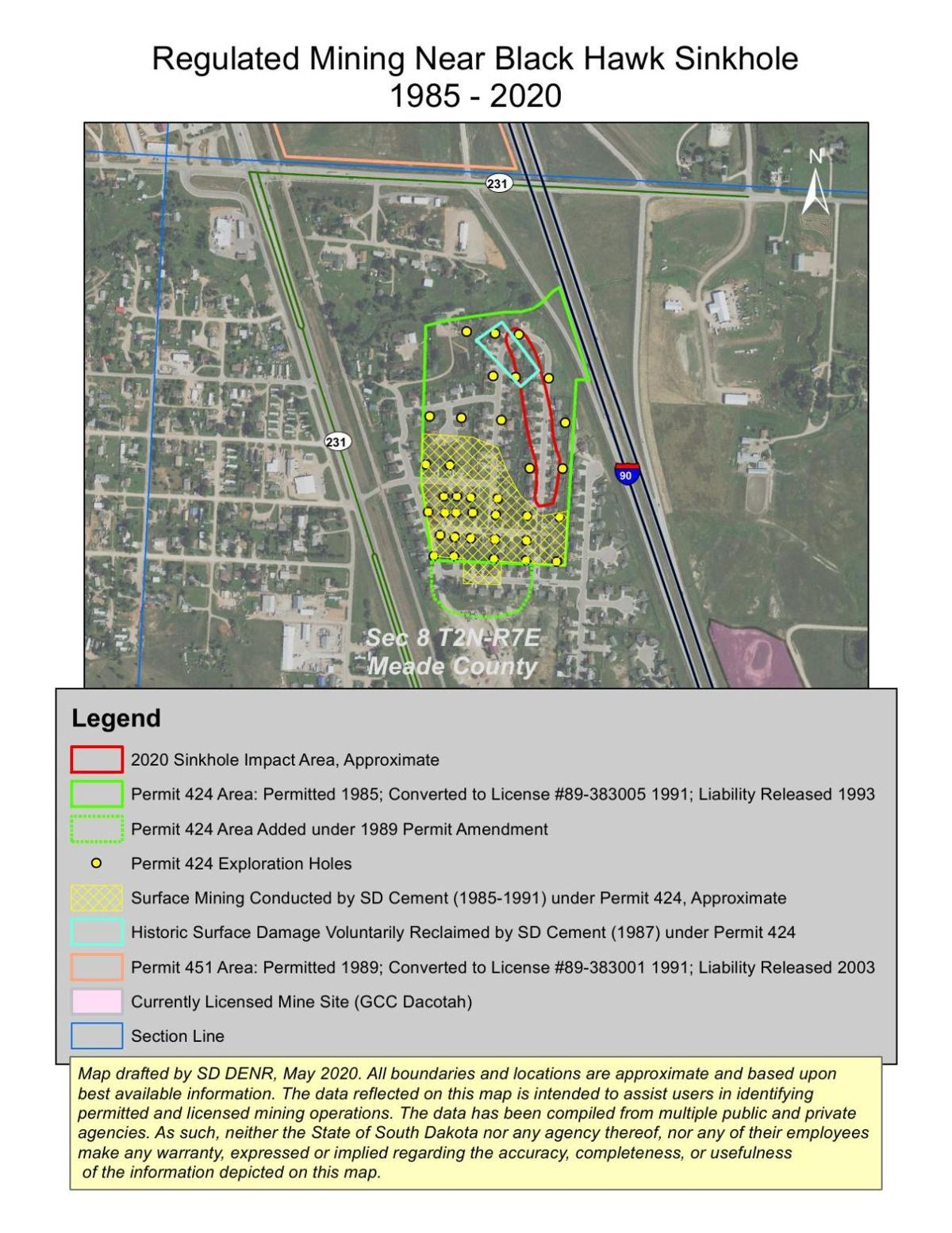 The geophysical study is set to begin in the third week of May and will be conducted by Mohammadhossein Sadeghiamirshahidi, a professor of geological engineering at Montana Tech who has conducted multiple studies on gypsum.

“We wanted to eliminate the possibly of bias” so we hired an out-of-state expert without ties to any of the companies, politicians or developers involved in building Hideaway Hills, Ealy said. This is a “truly independent expert” who can also testify in court.

The $17,451 study is being paid for by the Fitzgerald Law Firm but the results will be shared with two other law firms, the Northdale Sanitary District and the media.

Several studies have already been conducted in the community.

The caving group mapped out the accessible part of the mine while the Fitzgerald Law Firm has mapped potholes and drilled for samples. Fox Rothschild conducted electrical resistivity tomography (ERT) tests, which measures resistance between pins in the ground. The Department of Transportation used ERT plus drilling on the interstate but found no voids.

Ealy said underground metal from infrastructure and vibrations from semis driving over the interstate create challenges to studying what's under Hideaway Hills but Sadeghiamirshahidi, who goes by Dr. Mohammad, has identified the best combination of methods. 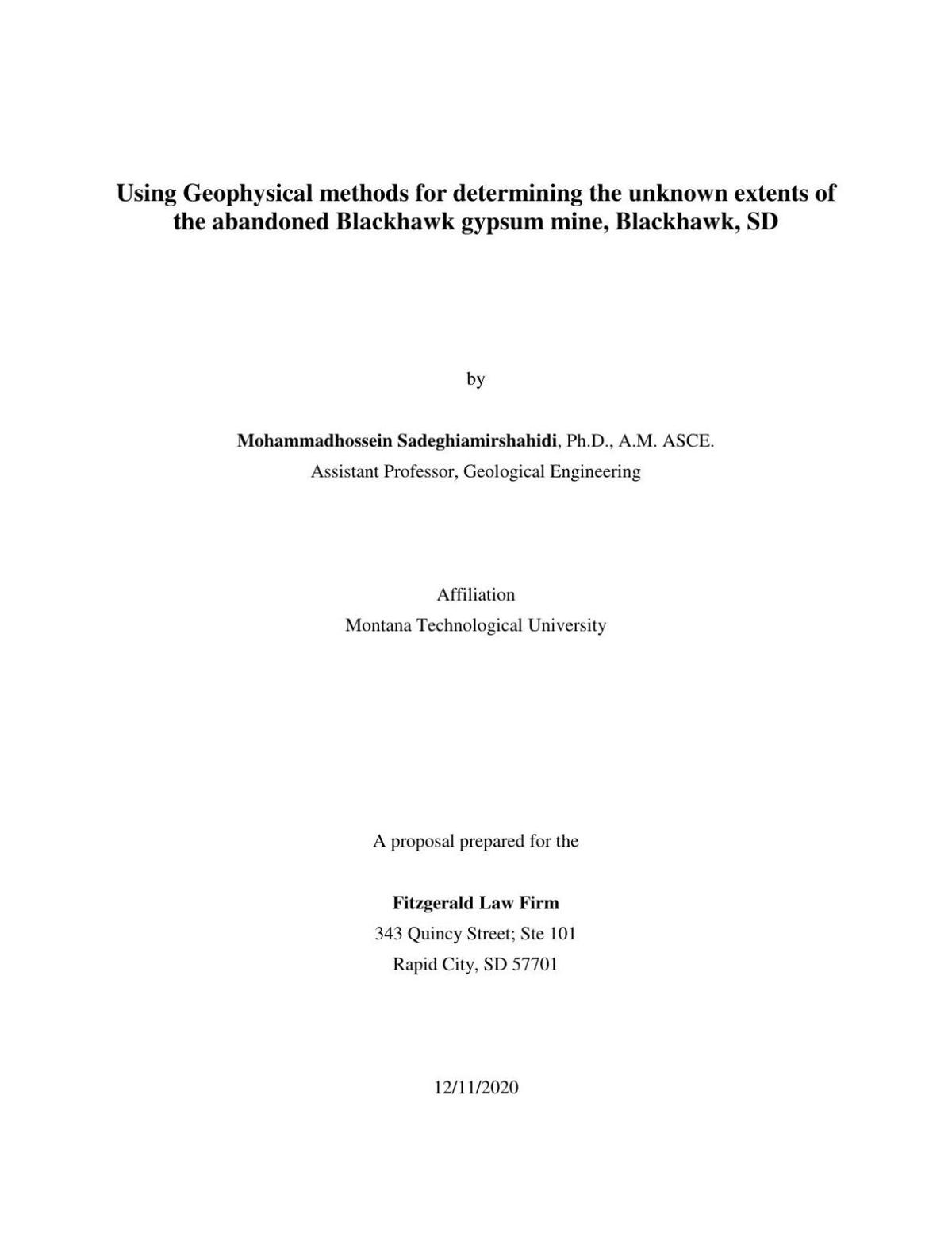 “In order to develop a hazard map for the area that can be used for issuing proper evacuation notices, the exact extent of the abandoned mine needs to be known,” Dr. Mohammad wrote in his study proposal.

Dr. Mohammad said he will also focus on estimating the depth of groundwater and any groundwater flow.

The professor noted that cavers couldn’t explore the entire mine due to collapses and water. Ealy and a geologist with Fox Rothschild both told the Journal that old aerial photos show evidence of the mine being larger than what the cavers explored.

Dr. Mohammad said he, another professor and a graduate student will use the Frequency Domain Electromagnetic, Self/Spontaneous Potential, and ERT methods, which all involve electricity or magnets. The first two methods will result in more than 2,000 data points.

The testing and analysis should take eight weeks and the final report should be completed by the third week of July.

The study will only focus on what’s underground — not what should be done about it. That issue was explored by School of Mines students for their senior design project. 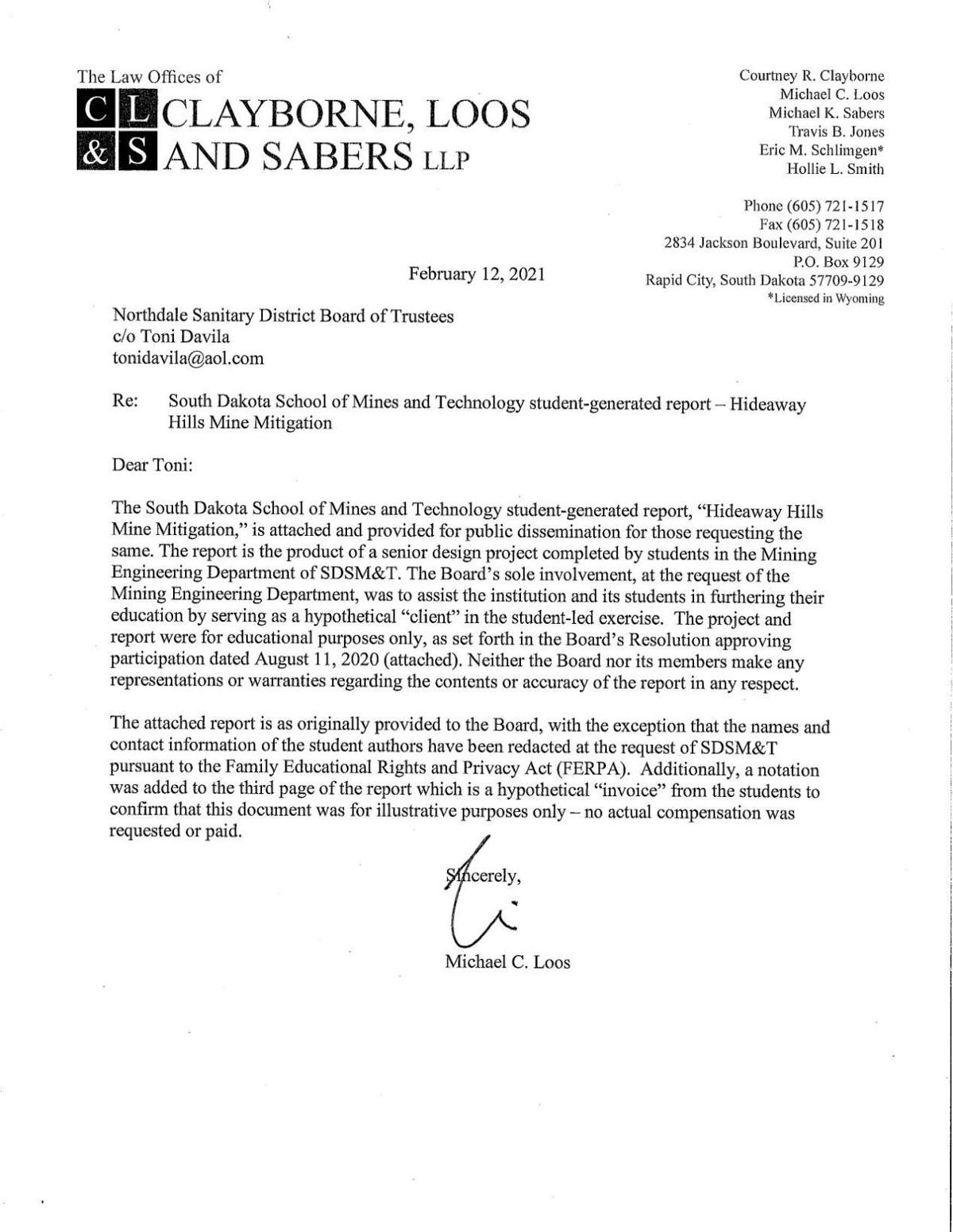 The student group studied mitigation measures to address ground stability problems caused by the gypsum mine. The options included filling the mine, underground stabilization, moving houses, reclamation and taking no action, and would cost between $1.5 and more than $3 million.

The group analyzed the mitigation measures by looking at worker safety, upfront and recurring costs, public perception and long-term effectiveness. It determined the best solution would be to raze the at-risk homes and reclaim the mine. ​

The Northdale Sanitary District — which provides water, sewer and other services to Hideaway Hills — held its monthly public meeting at 7 p.m. Tuesday at the community hall at 4925 Saratoga Drive.

The district will discuss a loan it received but has not yet accepted from the Department of Environmental and Natural Resources to re-route a sewer line at risk of collapsing, according to a letter sent to residents. The district said it wanted a grant but instead received a 20-year, $444,000 loan with a 2% interest rate.

The loan would increase utility rates for residents but rates are currently "well below average and unsustainably low," the letter says.

Marijuana amendment arguments will be live-streamed from Supreme Court 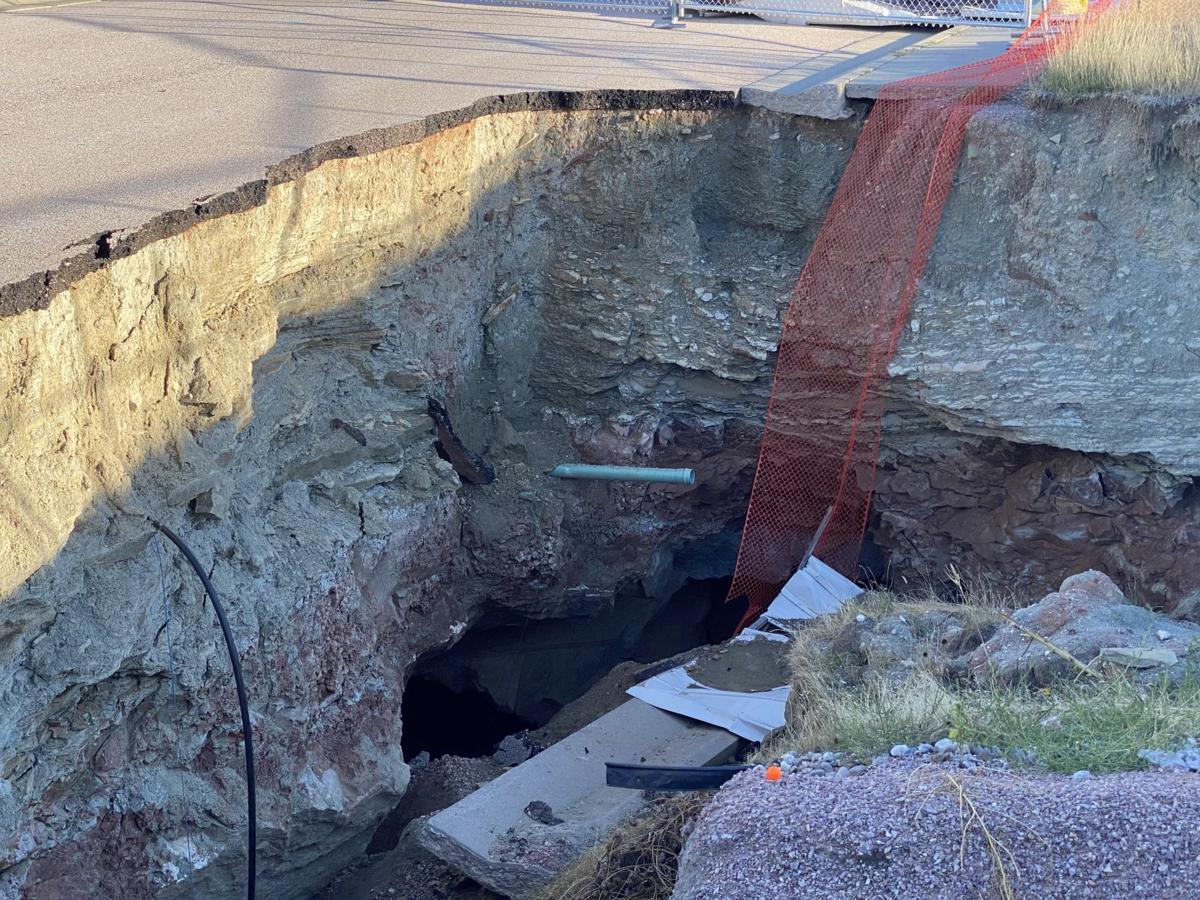 A photo of the Hideaway Hills mine collapse from September 2020. 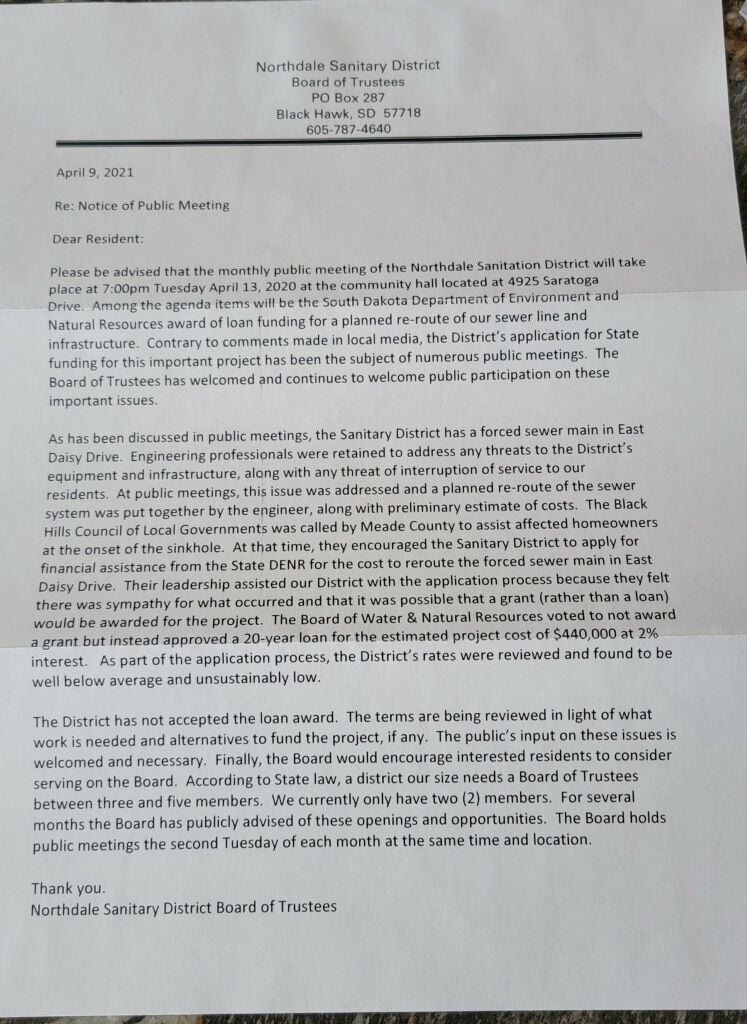 The Northdale Sanitary District will discuss Tuesday evening whether it wants to accept a loan to help fix a sewer line at risk of collapsing, according to this letter obtained by the Journal.