Thousands of schoolchildren across South Dakota are facing new barriers to getting proper nutrition at school due to the end of a pandemic-era federal program that provided free meals to all students regardless of parental income.

Parents in South Dakota, meanwhile, are facing new financial challenges as they try to pay for meals for their children at a time when high inflation rates are driving up costs for food, energy, housing and many other necessary goods and services.

The district does not have the funding to continue to provide free meals for all students on its own, and is working on innovative ways to continue to pay for food for students who need it.

Parents who got used to free meals for their children for two years are out of the habit of preparing or paying for student meals on their own, Stavem said. Some who qualify for free or reduced-price lunches due to low incomes forgot to reapply for the federal school lunch program and will now have to pay full price for meals.

And children who are not given food by their parents or who cannot afford to buy a school meal on their own are going hungry and can fall behind in class or be unable to concentrate due to hunger, Stavem said.

“They’re just going to be focused on how hungry they are,” she said. “We have an obligation as a country that provides a free and appropriate public education for all kids, to also look at the aspects of providing nutrition for all kids."

School officials across South Dakota told News Watch that a student in need of a meal is not turned away.

However, the inability of some children to obtain adequate levels of nutritious food can affect their development now and well into the future, said Stacey Andernacht, a spokesperson for Feeding South Dakota.

“A majority of an individual’s brain development happens from birth to five… so good nutrition is essential for kids and missing those meals is something that can impact a child in a way that makes them less successful in life,” Andernacht said.

Stavem estimates it would cost the Sioux Falls school district about $5 million a year to continue the free student meals program without federal funding.

The district is also facing higher costs to provide meals, with food costs up about 18% this year compared to 2021-22 and labor costs significantly higher as well.

Feeding South Dakota, the largest provider of charitable food in the state, has seen significant increases in the need for food among adults and children across the state so far this year, Andernach said.

The organization’s backpack program, which provides a backpack full of healthy food to schoolchildren on Fridays so they have food at home for the weekend, has seen a big jump in need among families already this year.

In the first week of the 2022-23 school year, in early September, Feeding South Dakota distributed 3,082 backpacks to children in South Dakota regardless of family income. The following week, distribution of backpacks rose by nearly 30% to almost 4,000 backpacks handed out at the 82 schools served by the program.

The end of the universal free meal program, coupled with high inflation, is increasing the need for food among lower-income families across the state, Andernacht said. From August 2021 to August 2022, the organization saw a 40% increase in the number of families visiting its mobile food banks in South Dakota.

Obtaining and affording healthy food is an even greater challenge for rural residents of South Dakota, where some grocery stores closed during the pandemic and others are charging much higher prices than in more competitive urban areas, she said.

Food insecurity — defined as the inability to afford or get access to sufficient amounts of healthy foods — remains a nagging problem in South Dakota. According to the Feeding America Map the Meal Gap database, nearly 75,000 South Dakota residents (about 9% of the population) were considered food insecure in 2020, and only half of those qualify for some level of federal food assistance. Food insecurity was highest in Native American communities and reservation areas, according to the database.

Free and reduced-price student meals are provided under the National School Lunch Program, which in Fiscal 2020 provided 3.2 billion student meals, 77% of which were at a free or reduced rate. The following year, the program provided 2.2 billion meals, 99% of which were free. The federal school lunch program cost $14.2 billion in 2019, according to the USDA.

Gay Anderson, nutritionist with Sioux Falls schools, said that right now, the district is losing money on each meal sold to students.

The cost for hot lunch is $3.05 per meal for elementary students and $3.25 for middle- and high-schoolers; breakfast costs $2.15 per meal at the elementary level and $2.25 for all others.

Rapid City geography teacher Bill Egan feels pain in his heart when he thinks that any student might be hungry and is unable to get the food they need.

Since the universal free meal program ended, Egan has witnessed a far greater number of students who need help.

“This year, I noticed there are so many kids not eating and you ask them why, and they say they can’t afford it or they have zero money in their lunch accounts,” Egan said

In response, Egan spends his own money at Sam’s Club to buy bulk orders of “Lunchables,” the prepackaged trays of snacks that typically include slices of turkey, cheese, crackers and fruit.

Along with bags of chips and snacks he keeps in his classroom at East Middle School in Rapid City, Egan has a dormitory fridge stocked with Lunchables that he discreetly gives to students who need a meal or a snack.

“I probably go through eight to 10 Lunchables a day at this point,” said Egan, who is 71 and has taught in Rapid City for seven years after a long career as a police officer.

On a recent day, Egan spent about $100 of his own money on pizzas for a monthly lunch party he hosts for students who get all their work done and behave well in school.

Egan said he hopes the federal government can find a way to bring back the universal free school meals program and make student nutrition a greater priority in America.

“We didn’t have this problem the last two years, because kids could all get free breakfast and lunch,” he said. “We should not live in a society where kids go hungry, period. In a nation that’s supposed to be the richest nation in the world, and the best country in the world to live, we should not have kids hungry in our schools. We can send billions of dollars everywhere else, but we need to take care of our future, and our future is our kids.”

Learn more about the secret language chimps use to communicate 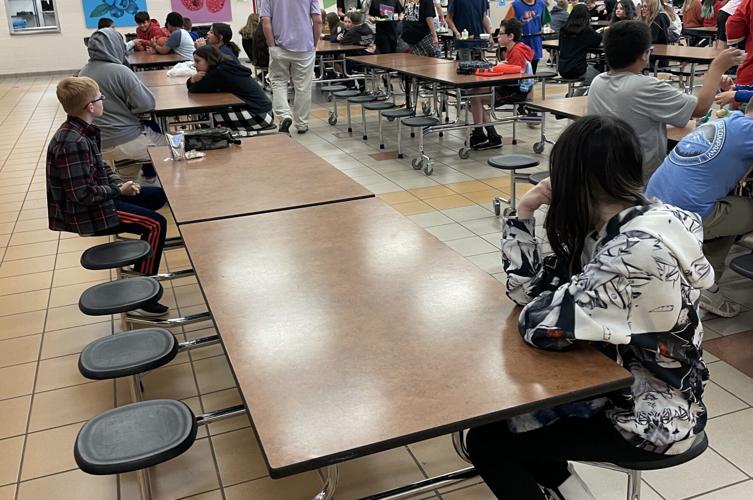 Students at East Middle School in Rapid City have lunch in the school cafeteria. With high inflation and expiration of a federal free student meal program, some students are having a harder time getting the nutrition they need to succeed in school. 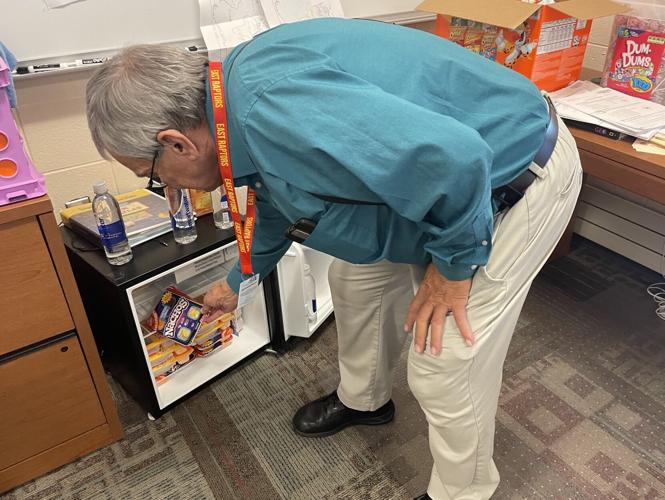 Rapid City middle-school teacher Bill Egan examines his supply of snacks and Lunchables that he gives to students who can't afford to eat at school or who need a snack for any reason. 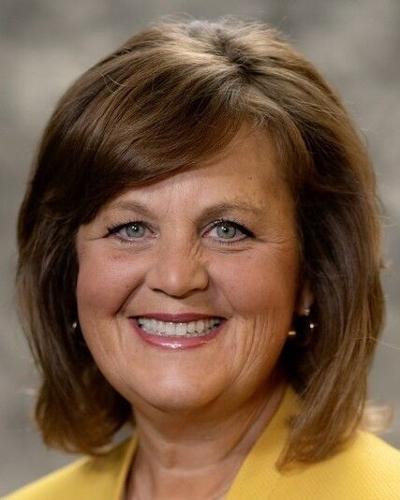 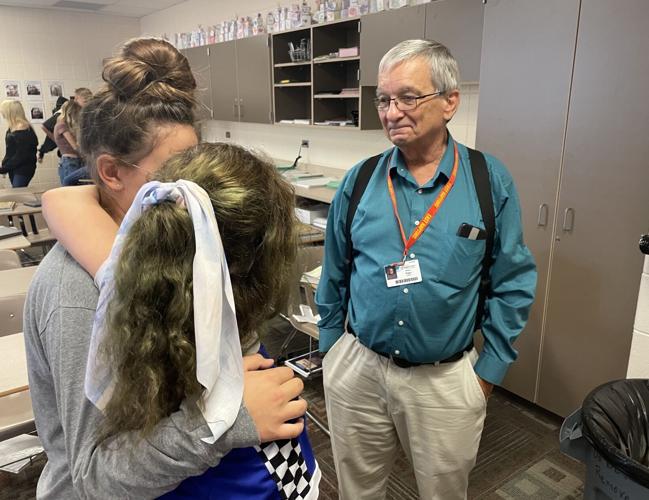 Rapid City teacher Bill Egan chats with students after a pizza party in Egan's classroom at East Middle School. Egan provides food to students who can't afford to buy a school meal or forget their lunches at home.