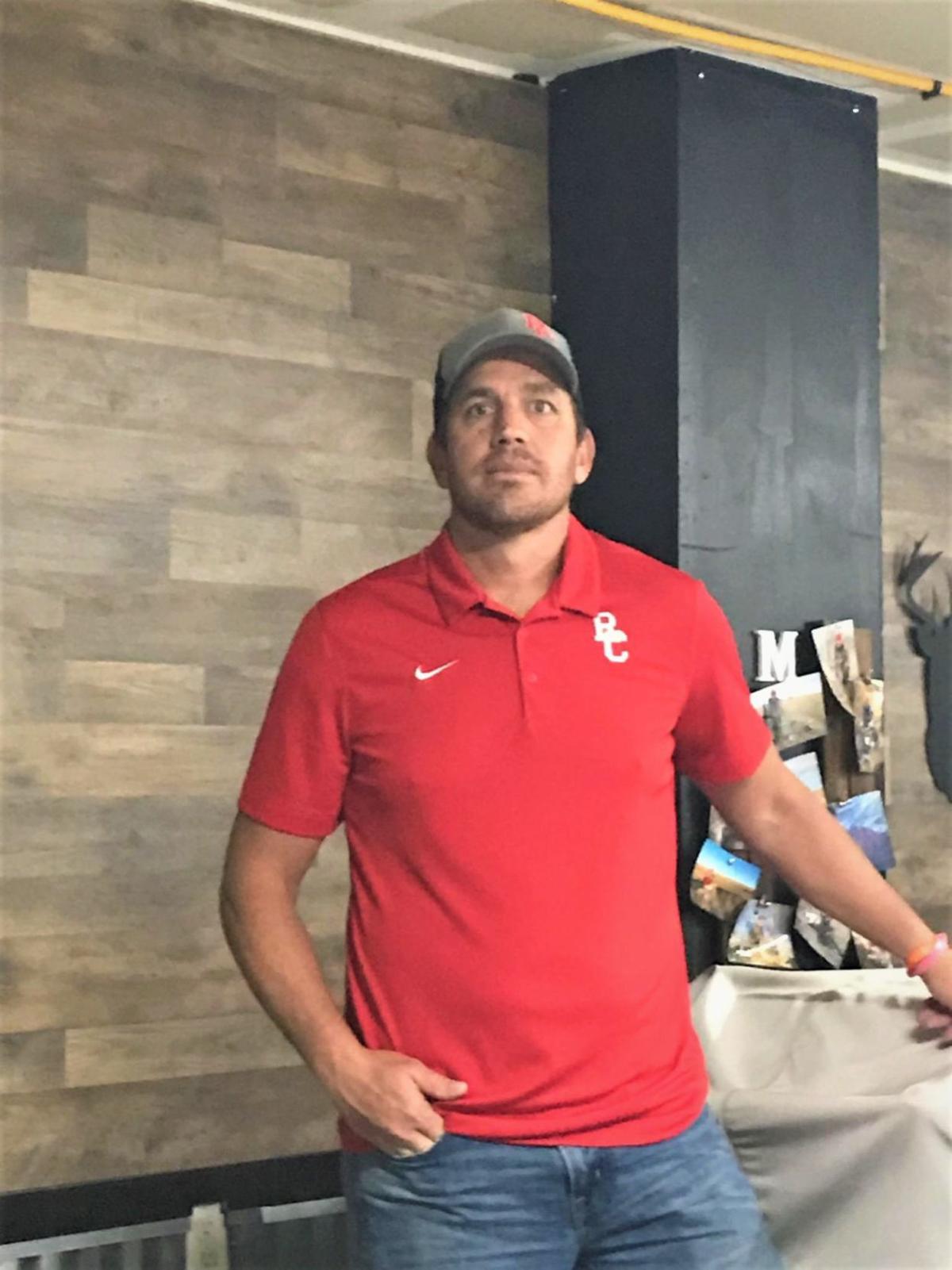 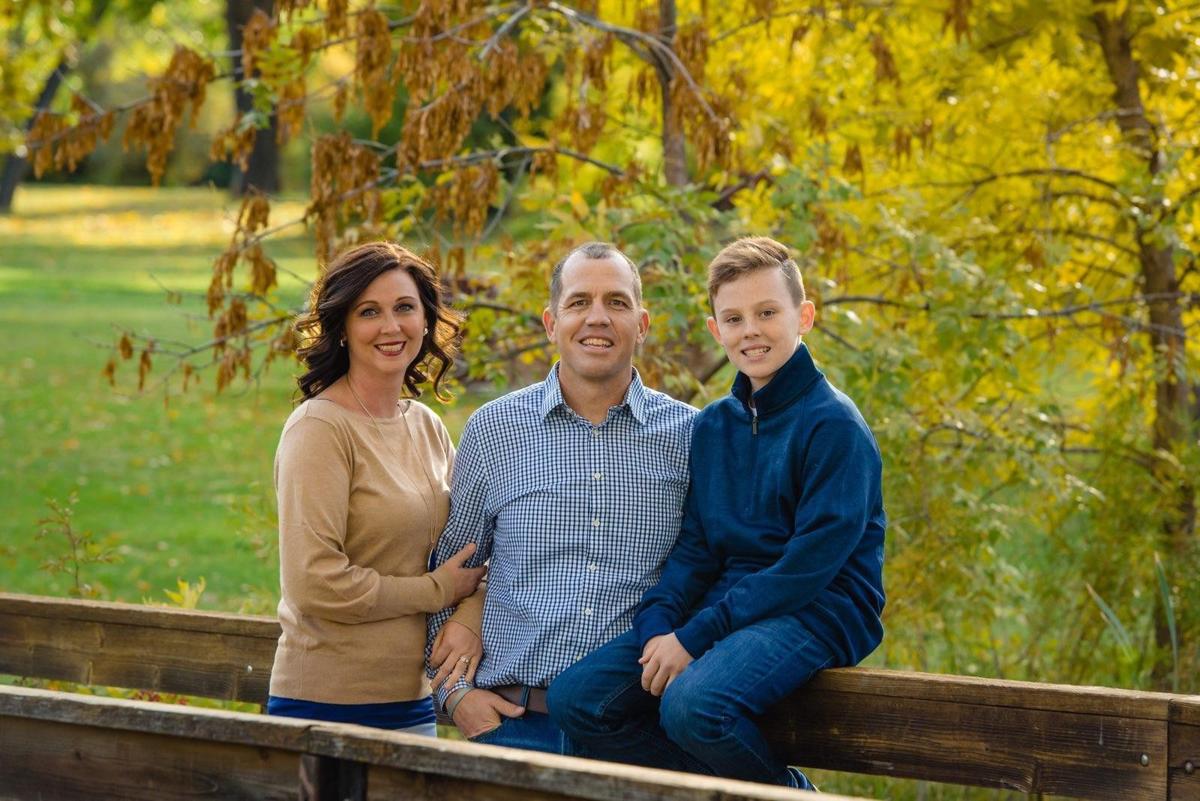 Pat Moriarty, center, was named the head track and field coach  at Rapid City Central Tuesday. He is pictured with his wife, Amanda, and son Brodi.

Moriarty, a Philip native, was previously an assistant coach for the Cobblers and at Lead-Deadwood, before becoming a head coach at Douglas for two seasons. He replaces Dave Dolan, who retried last week after 18 years as head coach for Central and 38 years in the program.

Moriarty has been coaching track and field for 15 seasons at the “AA” and “A” levels. In 2006, he began his coaching career at Lead-Deadwood High School before moving to Central, serving as an assistant coach for eight years. Moriarty started his head coaching career at Douglas High School in 2016 leading the Patriots for two seasons, before returning to Central to return to his assistant coaching role over the last three years.

Prior to his teaching and coaching career, Moriarty ran track at Black Hills State University, where he was two-time All-American.

Moriarty said he is grateful to be given this opportunity to serve as the next head coach for  the Cobblers.

"Central has a history being one of the top track and field teams in the state. Coach Dolan left big shoes to fill, but I am looking forward to building on the tradition of excellence and having the opportunity to continue working with the athletes at Central," he said. "Central has a very knowledgeable group of assistant coaches and I am excited to continue to improve our program with them. I’m fortunate that my wife (Amanda) and son (Brodi) support my decision to coach a sport that I love, and are proud to wear Cobbler red and be part of our Cobbler family.”

Moriarty told the Journal Tuesday morning that when he got out of college he thought he knew a lot about track, but especially working at Central he said he learned that there is a lot more to competing at a high level.

"I am thankful to gain some of that from Coach Dolan and just learn to take a lot to put those championships together," he said. "There's training, planning, having the right coaching staff, all of those different things. I feel very fortunate to have gotten those experiences the last 10 or 11 years."

Moriarty added that he feels his strength as a coach is managing people and working with them.

"I'm somebody who isn't too proud of myself. I take others ideas," he said. "I think my ability to work with others, the relationships with kids, and those assistant coaches, are key."

As a track coach, Moriarty said his favorite events, the ones he is most comfortable with, are the mid distances, the 400 and 800, the events he ran at Black Hills State.

When he started coaching, he was also a throws coach, so he said he has some knowledge there. Throughout his years at Central, he also said it has made him crazy about relays.

"I'm addicted to relays," he said. "I love putting relays together, especially the 4X100. I don't think there is a greater, more challenging race than that. It's so much more than just being fast. It's getting people in the right places, and those handoffs. There's so much more technique to it that I ever thought."

Moriarty said that not having a track season because of the COVID-19 pandemic is pretty minor for what a lot of people are going through. Particularly, he said, he has friends who are small business owners and he sees the struggles they are going through in this pandemic.

Maybe the toughest thing about this spring's track season is Central had about a week and a half of practices before it was stopped, and he said they had good numbers out this year, something they had been pushing for.

"I felt like we had a really good group of seniors who were multisports kids, which is what we also had been pushing, trying to get these kids to understand that one of the best things for baseball, football, basketball, volleyball, baseball, whatever, is to come out for track," he said. "We had a group of seniors who bought into to that. To not see those kids get to compete, it is hard. I see their pictures with the graduation stuff, and it is sad. And just having them around those younger kids, too. That group of senors were great examples and leaders too."

As he builds for his first season as head Central coach in 2021, Moriarty said his main goal for now is to improve the numbers of athletes going out.

"That will be challenging not having this season. Just getting out there, the contact with other coaches, building better connections with our middle schools," he said.

"I always feel we lose a lot of middle school kids because we're so late in the spring and we kind of get dis-connected from them. Hopefully we'll be doing some preseason stuff and trying to build that connection," he said.

Bauer expressed his desire to have someone in the building or RCAS district as the head track and field coach. Moriarty is currently teaching social studies at Rapid City Central in the Freshman Academy.

“Having our head coach in the building, especially in our Freshman Academy, is a huge benefit to building trust and relationships with student-athletes” Bauer said. “We are very fortunate to have such a great candidate right here in our building. Coaching high school kids is not just about coaching and teaching fundamentals. It is more importantly about building relationships, holding student-athletes and coaches accountable, and raising expectations to create a winning culture. I have no doubt Coach Moriarty will work harder than anyone at making our Cobbler track team a consistent, championship caliber program."

Lottery to offer 7,500 tickets for Trump's visit to Mount Rushmore on July 3

A Meade County man in his 50s was the first person from that county to die from COVID-19 illness. His death was reported Friday morning by the…

Pat Moriarty, center, was named the head track and field coach  at Rapid City Central Tuesday. He is pictured with his wife, Amanda, and son Brodi.